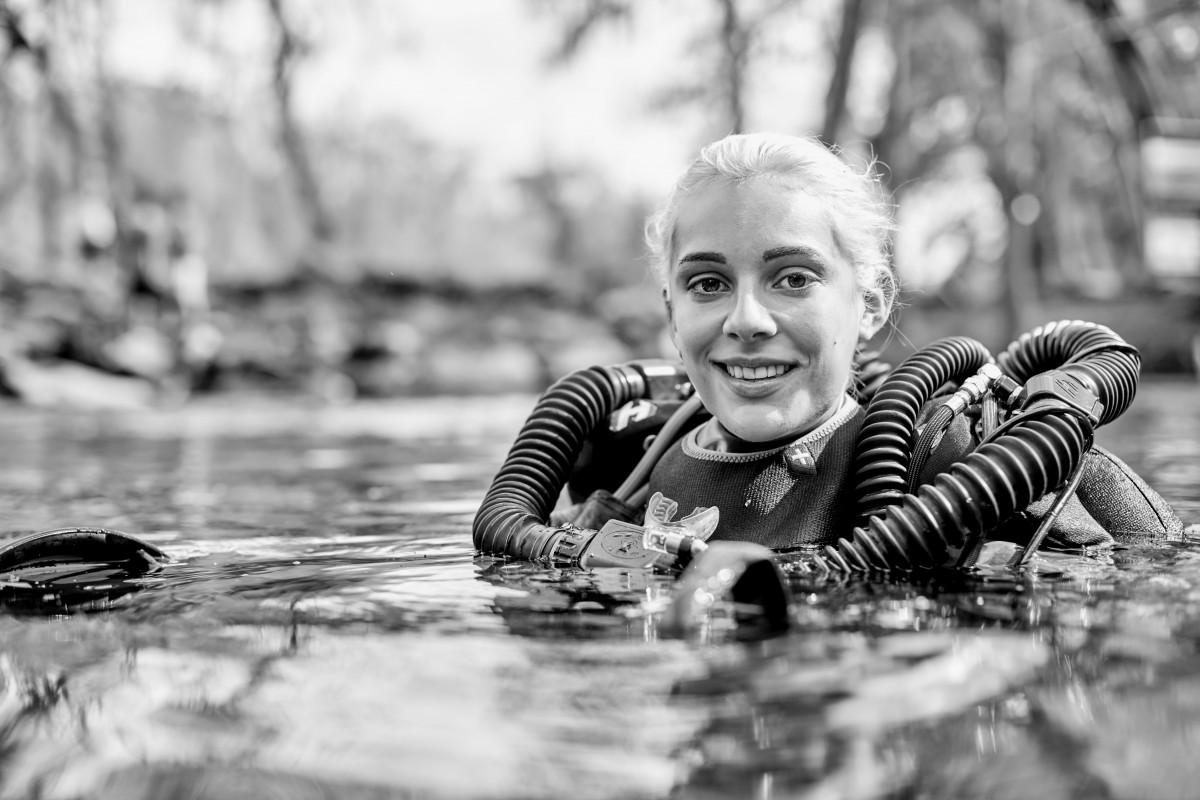 Technical Diver Extraordinaire Gemma Smith has completely and utterly destroyed the stereotypical image of a technical diver, and in a relatively short time has been involved in some of the most ground-breaking expeditions and projects around the world

Q: You seem to have been into all manner of adventure sports – skydiving, white-water rafting, kayaking. When did you first get into diving, and what was your driving influence?

A: I actually first started diving when I was 17. Honestly, at the time it was just the next adventure sport to have a go at. Although I had enjoyed all the other sports, none of them had really ‘clicked’ with me. I had tried them for a few months and then got bored. That certainly wasn’t the case with diving! I was hooked from the first moment I breathed underwater. It was pure magic.

Q: What was it about technical diving that attracted you to this niche within the sport?

A: I remember being a brand new Open Water diver and seeing Wes Skiles’ famous photo of Diepolder Cave. I remember thinking that there was no way there was actually somewhere on Earth that looked like that. It was so ethereal. One day I was determined to go there, one way or another, and so my interest in technical diving grew from there.

Also, my first years were spent diving in UK waters, and I became interested in all the World War wrecks in the Channel. We have so much amazing history here! So I slowly started my way on the technical diving path. At the beginning, all I could lift were double sevens, then 12s, then I could add a stage… it was a challenge, which was part of the fun.

Q: You are not by any means a stereotypical ‘technical diver’, did you find it hard to gain acceptance in this male-dominated field?

A: I have been helped by so many people in the industry, both male and female. There were definitely times over the years where I found it hard to gain acceptance, but I honestly think that was as much to do with my age as anything.

The diving community is getting older, and it has always been my desire to inspire the next generation to discover the wonder that diving can bring. To do that though we need to give them opportunities to grow and develop. I had amazing mentors over the years. Age has nothing to do with being a competent diver, and I think some people need to be reminded of this!

Q: You have been involved in several high-profile expeditions and projects over the years, including the Antikythera shipwreck, the DPAA Tulsamerican operation, and the film short Dive Odyssey. Can you tell us about these missions, and explain which have had the most impact on you?

A: The expedition that had the most emotional impact on me was the DPAA Tulsamerican operation, without question. I have always loved being on underwater archaeological projects like Antikythera, but this was different. The mission was to try and recover remains from three missing in action airmen who had been on the B24 Tulsamerican plane when it was downed.

The aim was always to send any osseous remains back to the United States, to be honoured and remembered as they should be. After several weeks of searching we did indeed find remains, but I think the moment that touched me most was finding the pilot’s wedding ring. It really brought home to me that this was a real person, who had had a real life, and a family. It’s the only time I have ever cried underwater.

Dive Odyssey was a passion project of my good friend Janne. Let’s be honest, most diving films are dull. It’s not really the best spectator sport! Janne wanted to change that. Inspired by classic sci-fi films such as 2001: A Space Odyssey, Blade Runner and The Abyss, his idea was to make an underwater sci-fi movie of sorts.

Nothing comes so close to the mystery and unknown of outer space as the underwater world does, so why not combine the two? It was two years in the making, but the final film is something I think I will be proud of for the rest of my life. All the filming was done in Finland and Norway in winter though, so I did tell Janne the next project we do, he has to pick a warmer location!

Q: You are also an experienced instructor. What is it about teaching people to dive that inspires you?

A: I love the reaction of seeing someone’s face underwater when they try scuba for the first time. The awe in their eyes is just incredible. Equally, I love the challenge of teaching a CCR cave class. Seeing students try, be challenged, and ultimately come out as more accomplished and aware divers is a feeling that never gets old.

Q: Gemma Smith is a multi-faceted offering – not only are you an accomplished technical diver and instructor, but you also get roped into modelling for the likes of Fourth Element. How different is it being involved in a photo-shoot to heading off on an epic tech dive?

A: I actually think they complement each other! A big tech dives takes a lot of planning and is as much a mental challenge as a physical one. You can’t let your mind wander when you have hours of deco ahead of you. The dry land photoshoots are so much fun, but with that being said, it still takes planning.

As for underwater photoshoots, they take a lot of work. I remember when we filmed Dive Odyssey, we spent several hours before each dive rehearsing and making sure we understood the storyboards. Even though we were on CCR, trying to explain exact positioning and timing to the models at 50m in a mine would not really have worked!

Q: We couldn’t talk to you without mentioning one of the biggest challenges you have faced. You were involved in a nasty traffic accident in March 2018 that left you severely injured. How is the recovery progressing, and what was it like getting back into diving?

A: Yes, it has definitely not been the easiest 18 months of my life! That being said, I don’t regret anything. The way the dive community came together to support me was just astonishing. The physical recovery is going very well (which sadly means I now don’t have an excuse not to go to the gym!), the mental side is, of course, slower. The PTSD is on the mend, but it takes time. One of the most-amazing feelings which brought me instant relief was actually getting back in the water. It felt like I was ‘home’.

Q: So, finally, what does the future hold for Gemma Smith (other than being a speaker on the Inspiration Stage at the GO Diving Show in February 2020)?

A: Oh yes, I’m definitely looking forward to being a speaker at GO Diving! As for other plans… there are things in the pipeline for sure! My outlook on diving has changed though since the accident. While I have always been incredibly driven to succeed, I think my definition of success has changed. I’m in the process of putting together underwater projects that show people how mentally and physically healing diving can be. If it helps even one person, it will be worth it.