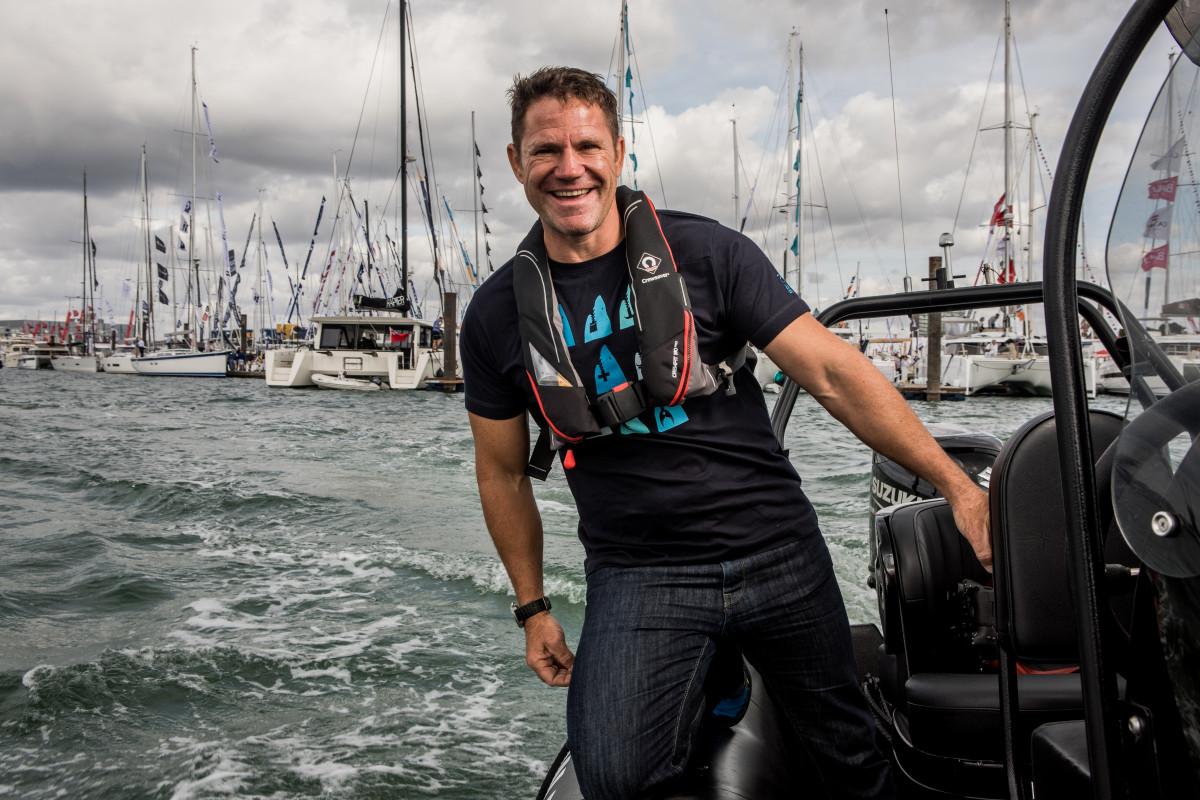 Globe-trotting adventurer Steve Backshall is a TV presenter and author best known for his children’s TV series Deadly 60 and its subsequent spin-offs, and his latest primetime series, Undiscovered Worlds.

Scuba Diver caught up with the globe-trotting adventurer – who is the headline act at GO Diving Show 2020 – to talk diving, climbing, kayaking, the perils of dealing with animals, and Strictly Come Dancing!

Q: When did you first start diving, and what captured your imagination about the underwater world in the first place?

A:  My love for the underwater world started way before I started diving. I used to be obsessed with snorkelling on family holidays (according to my folks and photos, from about five I would be in the sea all day long with my mask on!) It wasn’t until 1990 when I got my first certs, while travelling around Asia. I adore everything about being underwater; the weightlessness, the freedom, and most of all the wildlife.

Q: You often employ the use of a full-face mask when presenting to camera underwater. How long did it take you to get used to using this piece of equipment?

A: I worked up to it. We started with old-fashioned Kirby Morgan-style masks, but now I do all my diving on a mask with no oral nasal. This means you can see my whole face while I’m talking, but you have to be super-careful about CO2 build up if you’re talking lots or swimming hard. I’ve now done hundreds of dives using it, including exploratory cave diving, which is crazy committing. It’s the most-liberating thing ever when I get to use half mask or freedive!

Q: From viewing the awesome photographs on your Twitter feed, you have been doing some amazing cave/cavern diving for Undiscovered Worlds. Is this your first experience of venturing into an overhead environment underwater, and what was it like?

A: I’ve been certified for overhead environments for more than a decade, and have done under ice, penetrating wreck and a good amount of cave, but this was the biggest cave-diving project I’ve ever been involved in. I was in Yucatan for six weeks; the first week was pretty much just spent re-learning how to swim, using micro movements with my fins to glide through the caves without kicking up silt.

Q: Fellow TV presenter and friend Andy Torbet has embraced the world of technical diving, using a closed-circuit rebreather to head off into the depths to visit shipwrecks like the Britannic, or explore flooded mines in Finland. Are you tempted by the lure of technical diving and rebreathers?

A: Rebreathers have no benefit for me working in television. With rebreather you need an oral nasal, which obscures the face, and makes speaking muffled. I’d probably need to be subtitled on screen, and it removes any connection you have with the audience. Some of my camera ops work on rebreather – it is great once you’re down, and the lack of bubbles can be great for filming wildlife, but the pre-dive checks are paralysing if you have a chance encounter and need to hop overboard quickly!

Q: Like Andy, you are a true action man, and over the years as well as diving we have seen you climbing and kayaking while in front of the cameras. What is it about these adrenaline sports that attracts you to them?

A: Increasingly the paddle, rope, ice axe and dive cylinder have become tools for me; a gateway into another world. Over the last year I’ve led ten expeditions into places human beings have never been before, and it’s been the greatest privilege of my working life. Having a working knowledge of the skills necessary has been the big thing that’s enabled me to take the first steps in forests, caves and cliffs where humans have never been before. That’s pretty special!

Q: You are a proud ambassador for The Scouts, and through your televised adventures have probably inspired hundreds, if not thousands, of children (and big kids!) to explore the great outdoors, be that topside or underwater. Why do you think it is so important to connect with the natural world?

A: Great (and essential) question. We are at a crux point in history. A huge amount of our young people are hungry for change, valuing our planet and their future place in it more than ever before. This growing youth activism is the hope for the future of Planet Earth. Scouting is the largest and most-important movement that gets young people outside, into adventure, embracing the natural world.

I am beyond proud at our messages of inclusivity, diversity, and building skills for life. The next big step has to be making Scouting available and attractive to young people who might never otherwise get those opportunities. Diving and Scouting is a natural mix, and I’m right behind projects to forge those connections.

Q: You filmed several documentaries for the National Geographic Channel before joining The Really Wild Show for a few years, but it was the BAFTA-winning Deadly 60 series that really put you on the map. What are your fondest memories of filming for this immensely popular programme, and its follow-ons Deadly Pole to Pole, Deadly 360, Deadly On A Mission and Backshall’s Deadly Adventures?

A: Deadly was my baby; from the locations, to the animals, to the crews, to the very style of filming. To see it go from an idea to a proposal to the most-successful kids wildlife series around the world (going to 157 countries and seen by an estimated half a billion people!) will always be my proudest achievement. Well, other than my little boy, of course! I think going nose to nose with a leopard seal under a jade-green Antarctic iceberg is the memory I treasure the most, though it’s pretty tough to choose!

Q: Having come into contact with all manner of lethal creatures over the years, particularly on the Deadly series, did you have any dicey moments when it all went horribly wrong?

A: Our definition of ‘Deadly’ is the dictionary one – the animals we film are not dangerous to us as human beings, but deadly in their world, to other animals. We mostly feature things like dragonflies, kestrels, whalesharks and conger eels. If we ever do cover sharks, snakes, spiders and scorpions, I am always at great pains to break down the myths and fears people may have of them. In all the years of Deadly, the only animals we have talked about in terms of their danger to us are parasites; particularly the mosquito.

Q: You were on Strictly Come Dancing. How did that experience compare with facing up to sharks, big cats, snakes and other potentially deadly animals?

A: My normal life is exactly what you see on screen. Last year, I had 120 nights under canvas; most of it in tropical rainforests in a hammock, covered in leech bites and itching with chiggers. I spent the summer of 2014 climbing Mount Asgard up in the Arctic Circle… then a week after I landed was up to my armpits in flashbulbs, sequins and spray tans. It was weird, bizarre, utterly bonkers, and made me realise how glad I am that my life is led outside of the public eye, but I have made dear friends like Jake, Judy, Thom, Pixie, Sunetra and the others, who would otherwise never have been a part of my life.

Q: You became a household name with Deadly 60, but recently you have been doing more mainstream TV, including BBC One’s Wild Alaska Live, BBC2’s Undiscovered Worlds, and Channel 5’s Hedgehog A&E. You always come across as hugely enthusiastic regardless of the programme in question, but how do behave differently when you are filming for ‘adults’ rather than a younger audience?

A: I pitch each programme to the demographic of the channel and timeslot, but I think people would be surprised at how kid’s shows are different… We put more facts, more conservation, more gore, and more science in Deadly than I would ever dare do on primetime. Kids are used to learning; they do it every day.

Adults feel preached to if you put in lots of factual content. On Deadly series three, we had a media graduate writing his doctorate come in and visit us because he’d worked out that Deadly had the highest factual hit-rate of any natural history programme on TV. It’s so liberating – and I think so, so important to keep making programmes aimed at kids, who just haven’t made up their minds how they feel about the world yet.

Q: Finally, a bit of a tongue-in-cheek one – there were howls of anguish in playgrounds across the UK when the news broke about your marriage in 2016. You have always been a firm favourite with the ‘mums’ – and I have witnessed first-hand how vociferous they can be when you are on stage – but surely that can’t phase someone who has handled or been in close proximity to some of the most-dangerous animals on the planet?

A:  I think it’s something that most kid’s presenters get! Having just had our first baby, Hels and I haven’t watched television in months, but when Logan gets older, Mr Tumble will be my best friend; and that’s how families treat me. It’s the most-beautiful sensation to be in public, and meet people who treat you like an honorary part of their family!