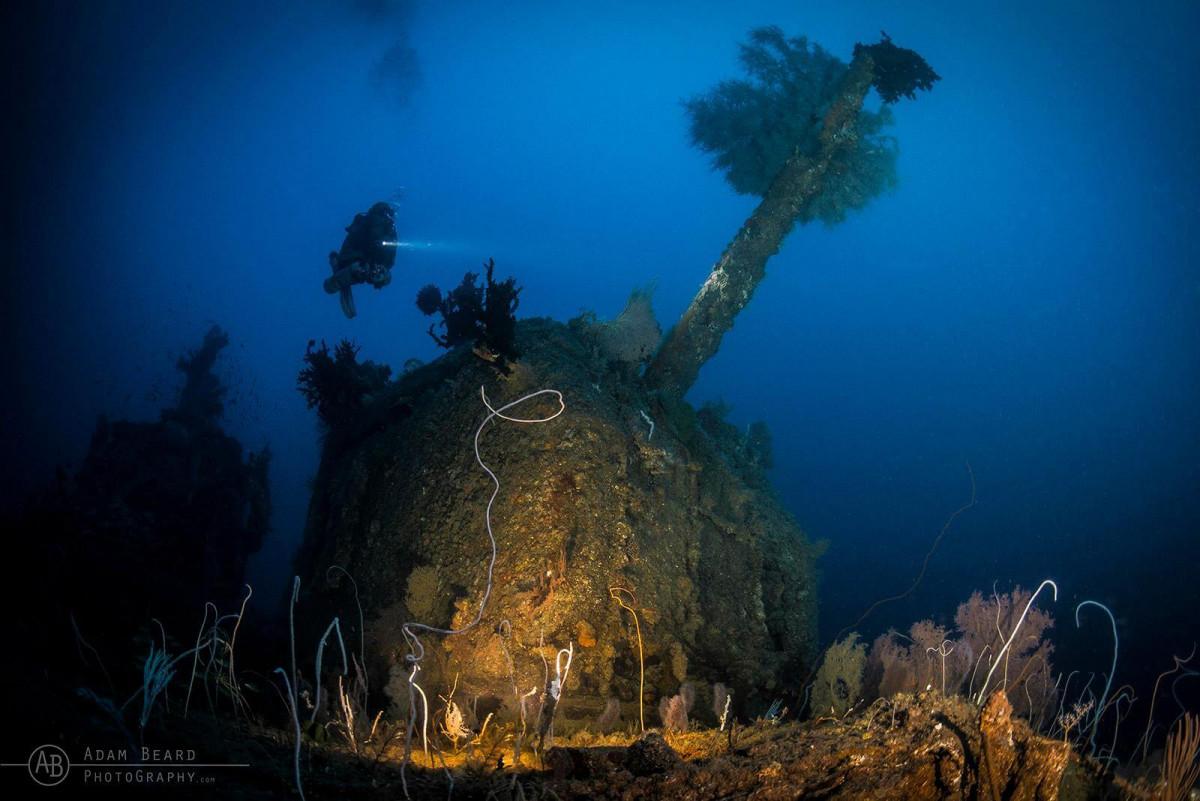 My very first camera was a Pentax ME. I vividly remember running to the local chemist in my small village in Devon next to the church, as this was the only chemist and development centre that gave me a free 36 exposure roll of film when I got a roll developed one there. I also used to use a roll-on camera underwater as my very first camera when bodyboarding around Cornwall, in the south-west of England. I have always been intrigued by the deep, with tales of old with pirates, treasures, and stories about the sea.

Swimming as a child was my first underwater experience, but all I wanted to do was stay longer and go deeper, so diving was the obvious choice. I used to fish and swim a lot as a child, which is funny as my mother can’t swim. I taught her later in life in fact. My mother is an illustrator and always inspired me to look at light and the beauty that the planet has to offer – from the smallest of critters to the biggest of trees.

So when I was first immersed in the ocean as a kid with mask, snorkel and fins, I was sold. At 18 I started chasing blue water and loved to freedive. The first destination that opened my eyes was Croatia. I continued later in life to explore Europe, Canada, USA, Asia and Australia. Then from Fiji, the Solomon islands, Papua New Guinea, West Papua in Indonesia, Iceland, Greenland.

What’s in your underwater kitbag?

A slightly more serious Canon G12 followed the land Pentax ME and roll-on toy film underwater camera. I still rate the G-series today as they are great beginner cameras that allow photographers to gain great flexibility from Auto though to manual shooting modes.

I have multiple lighting systems including Archon, Inon, Light and Motion, Big Blue and Keldon. All my neoprene and OC dive equipment items are Beauchat, as I highly rate the quality and durability. With an average of 500-750 hours of diving per year, I really can put gear to the test and Beauchat is by far the best I have found so far. I dive a JJ CCR 99 per cent of my underwater time which allows me longer bottom times and great accelerated decompression. So my overall travel weight is large… 40-60kg. That said, I will be somewhat selective on what gear to take depending on the job in hand.

One of the most difficult questions I’m often asked is my favourite location for diving, as I’m someone who likes to take shots of all things big, small and cool moments. I would have to say the best place to constantly shoot is the place with the most diversity. That way, you can keep your photography fresh and come up with new ideas or ways to shoot different subjects.

I love ambient lighting and wreck photography, so my current location is the South Pacific. Indo to the Papua regions, from Fiji, Solomon’s, Papua New Guinea, West Papua, and parts of Indonesia. The Oceana South Pacific Area is by far my favourite area away from the hustle and bustle of full-blown tourism, and I believe I’ll be here to stay for exactly those reasons.

Within just a few pond hops, you have the big blue filled with mantas, tiger sharks and caves with dancing light curtains. Swim throughs with jungle pop-ups and of course, my favourite technical WWII wrecks ranging from seaplanes at 25m to oil tankers.

One of my personal favourites is the USS Arron Ward at 70m, and even the USS Atlanta at 125m in depth which I’m currently planning to dive next April. More people have walked the moon than done that dive, so I’m eagerly waiting to see the light cruiser where she has rested for 75 years. I’m looking forward to 2020 and running photography workshops and charters across the coral triangle, so stay tuned for more info on my social media.

Most challenging dive (and why)?

The most changeling dives are the ones where things generally don’t go the way you planned them to. It doesn’t have to be technical or banging with raging current, but it could be starting the dive eagerly wanting to take a picture of a small and rare flame angle fish and having to repeat the dive six times to get the shot you envisioned.

This could be due to a series of factors, but in the case of my flame angle, it was because the fish was scatty. It was incredibly fast-moving, darting in and out of coral, hiding behind other fish and not striking a glamour pose for me and the lens. However, after some time I got a shot that I was happy with, but I will not stop working on improving any shot just because I have a nice one!

I have several diving inspirations. The first is my wife Carmen Toanchina. We met at a shark diving resort in the Philippines and have been together for six years – we married last year.

She showed me a love for the small, weird and wonderful things that lead to furthered love for macro and super macro photography. Her in-depth knowledge, love and passion of marine science still amazes me today. Taking shots of the ‘big stuff’ is one thing and is a challenge for angles and lighting, but even more so when a subject is less than 2mm in size.

Other diving inspirations have to be my technical instructors and their instructors. They really learned how to teach well and cater to each diver’s needs, especially as I have dyslexia. Their patience and professional manner has been outstanding. So a big thanks to my sponsor Beauchat, Blue Green Expeditions, Sam Manson, Andrew Simpson, Ayla Cohen also not forgetting, Pierre de villas and Dave Pierce who are always supportive of last-minute technical needs. Pete Mesley, who introduced me to rebreather diving, has been a guide and coach though out my CCR training. 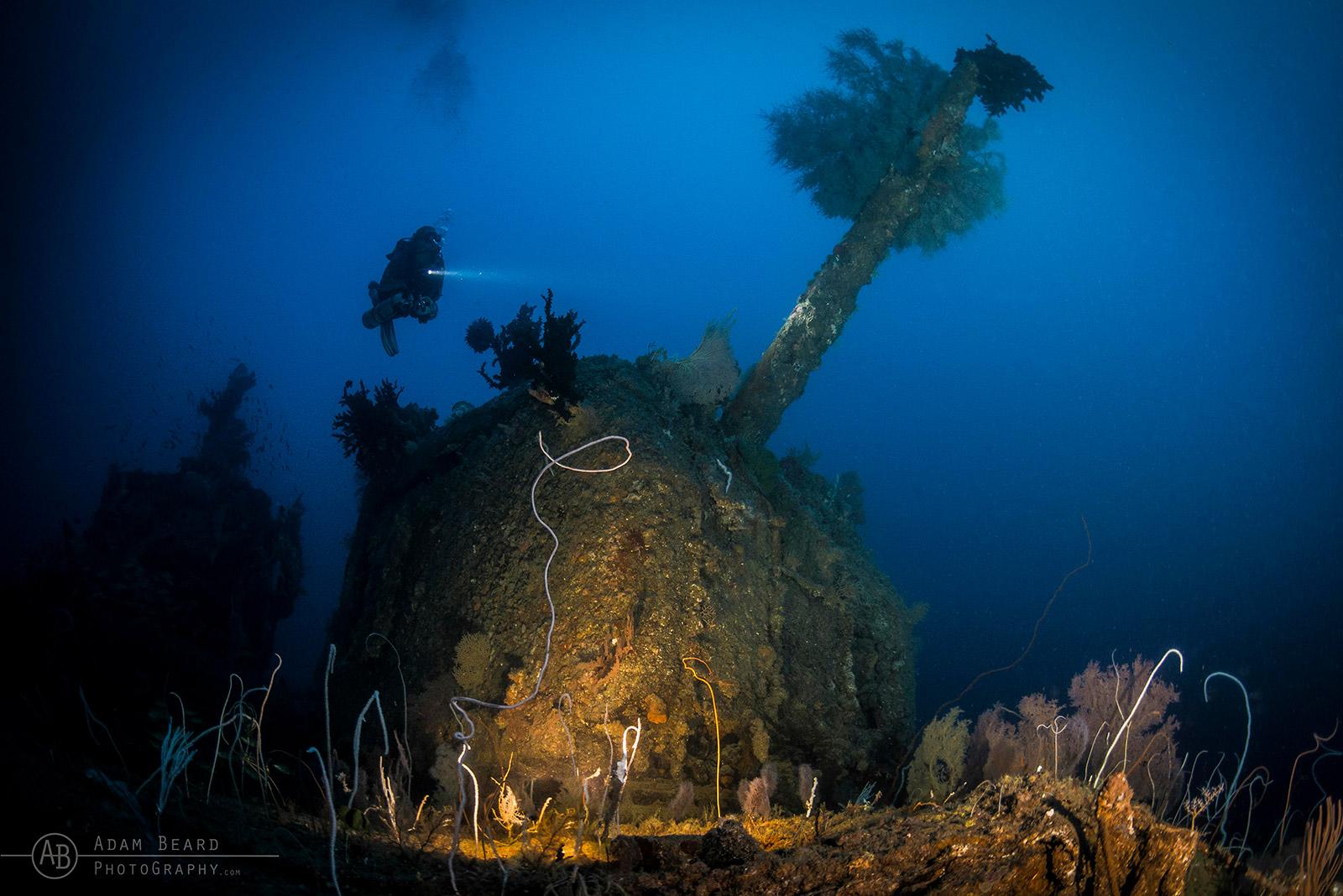 My list of locations and subject trophy shots continue to grow the more places I go and more people I meet with the same passions. I’m very much looking forward to my upcoming trip to Bikini Atol so stay tuned for some wrecks. My first trip to the Arctic was an eye-opener and made me want to explore the Antarctic, so one day I wish to explore the Antarctic, dive with leopard seals and bigger icebergs.

I wish someone had told me when I started out, “Get close and when you think that’s close, then get even closer!” Getting close has countless advantages. It's one of the first things we all do when shooting underwater, just ‘point and shoot'. For instantly better results get closer!

Getting close and shooting at an upward angle will instantly improve results. Sometimes you may miss the photo opportunity in order to get into the correct shooting position, but hey, this is life. There is always the next time. If you can do this without causing any damage to yourself, others, or the environment, then you are already halfway to taking awesome imagery.

I have now flooded and broken six lights, three strobes, and two camera systems. Touch wood, I have had no major mishaps underwater. Following a check-list for dive and camera gear without distractions and not allowing yourself to become complacent is the best way to avoid any underwater mishaps.

That said, one occasion springs to mind that I won’t forget in a hurry. While photographing guests entering a swim though, one guest had task loaded and over-equipped himself for the dive in hand. He was in a dry suit with multiple attachments and after falling behind the group, had taken a wrong turn during the swim though.

As I was not the guide for this diver, I decided to follow him into the wrong turning to ensure he made his way out safely. The diver had not vented expanding air from the drysuit as he was ascending in the swim though, and had got himself stuck on the roof of the cave. With his hoses entangled he only became more nervous and breathed harder, further attaching himself to the roof of the cave, unable to vent air via his arm.

I waited for the diver to calm down and made my approach pulling his fins down allowing him to vent the air from his arm in the drysuit. We ended the dive together once I led him back out.

Before I became acclimatised to the warm water diving in the coral triangle, I would only wear board shorts and a rash vest. Let’s just say this left me very exposed to the elements. I was with my Divemaster when he started pointing at my knees with wide-open eyes.

I looked down only to see a banded black and white tail coming from my loose-fitting board shorts. I froze, as I remembered a story of someone saying that the banded sea snake is the most poisonous snake in the sea. However, it would struggle to bite you due to the position of its fangs. So I stayed very still and he swam out of the other side. Thankfully, I was unharmed and he was just friendly. I have worn at least a full skin suit ever since!

Based in The Solomon Islands, Adam directs cruises with Master Liveaboards and leads dive explorations onboard MV Taka. His pictures have been published in magazines, documentary movies and publications. He has always been fascinated with art and effects that can be created using a camera and the world as a canvas. His first camera was a Pentax ME, and he vividly remembers running to the local chemist to get his images developed (with a free new roll of film thrown in).

Adam is the first underwater photographer of the week we know of who completed his interview questions using his wet notes while decompressing underwater!