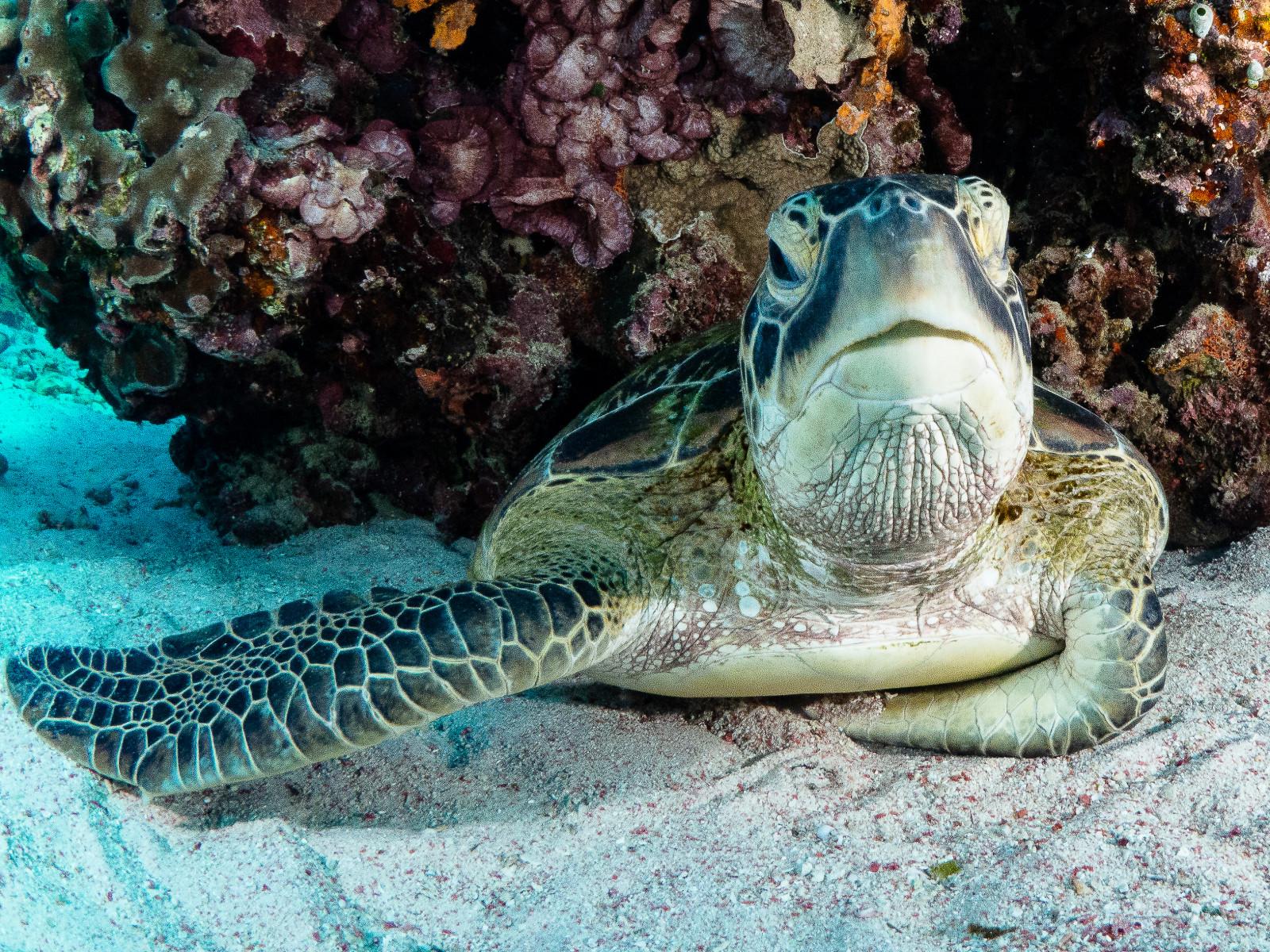 The Well-Rooted Mangroves of Indonesia Watching the sunset from the...

Underwater photographer and writer Walt Stearns has been a...

Anne and Phil Medcalf’s Alphamarine Photography Facebook group generates a lot of questions about successfully using strobes, so they thought it would be a good idea to talk about them in a little more detail. 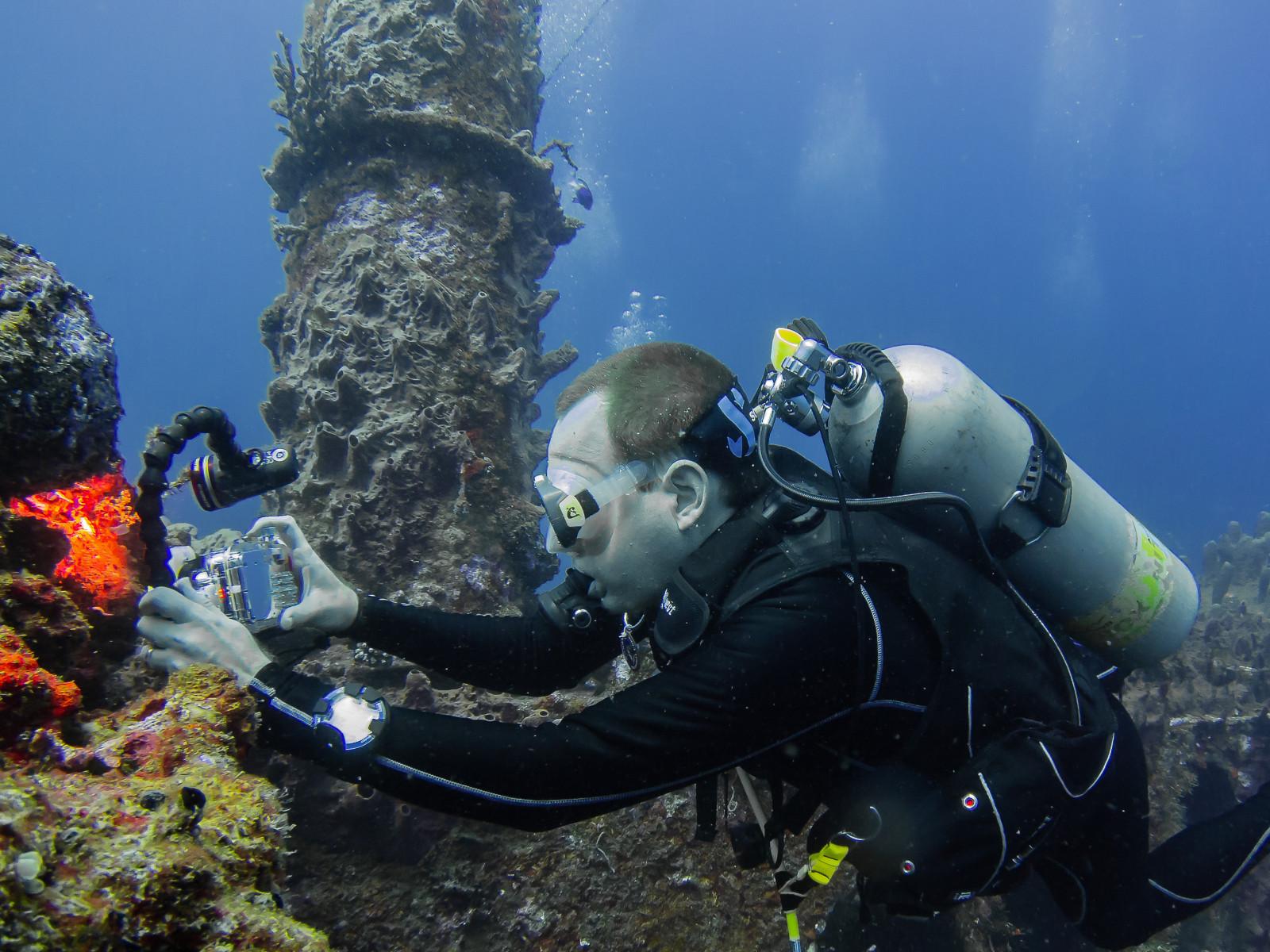 So, what is a strobe? In underwater photography terminology, it’s an external flash – and the first question we are often asked is what is the difference between a strobe and a video light.

A strobe functions like a conventional camera flash, giving a powerful, short burst of light. This light is so strong and brief that it can freeze the movement of the photographic subject lit by it, very useful when taking shots of fast-moving marine life. All but the most-powerful video lights cannot match the output of even a relatively small strobe. This combined with the fact that video lights give constant illumination means they can't freeze movement in the same way that a flash does.

As well as not being able to freeze movement, using a constant light creates other issues that you don’t encounter with strobes. Marine life tends to react more to video lights than flashes. From our experience using constant lights and diving with other people who have them, creatures will often turn away from them and sometimes move to get out of their area of effect completely and when light levels are low, you can find yourself dazzled by carelessly aimed beams. Animals will tolerate flash much better and usually don’t react at all. This may stem not just from the light itself, but also the heat generated by powerful video lights. 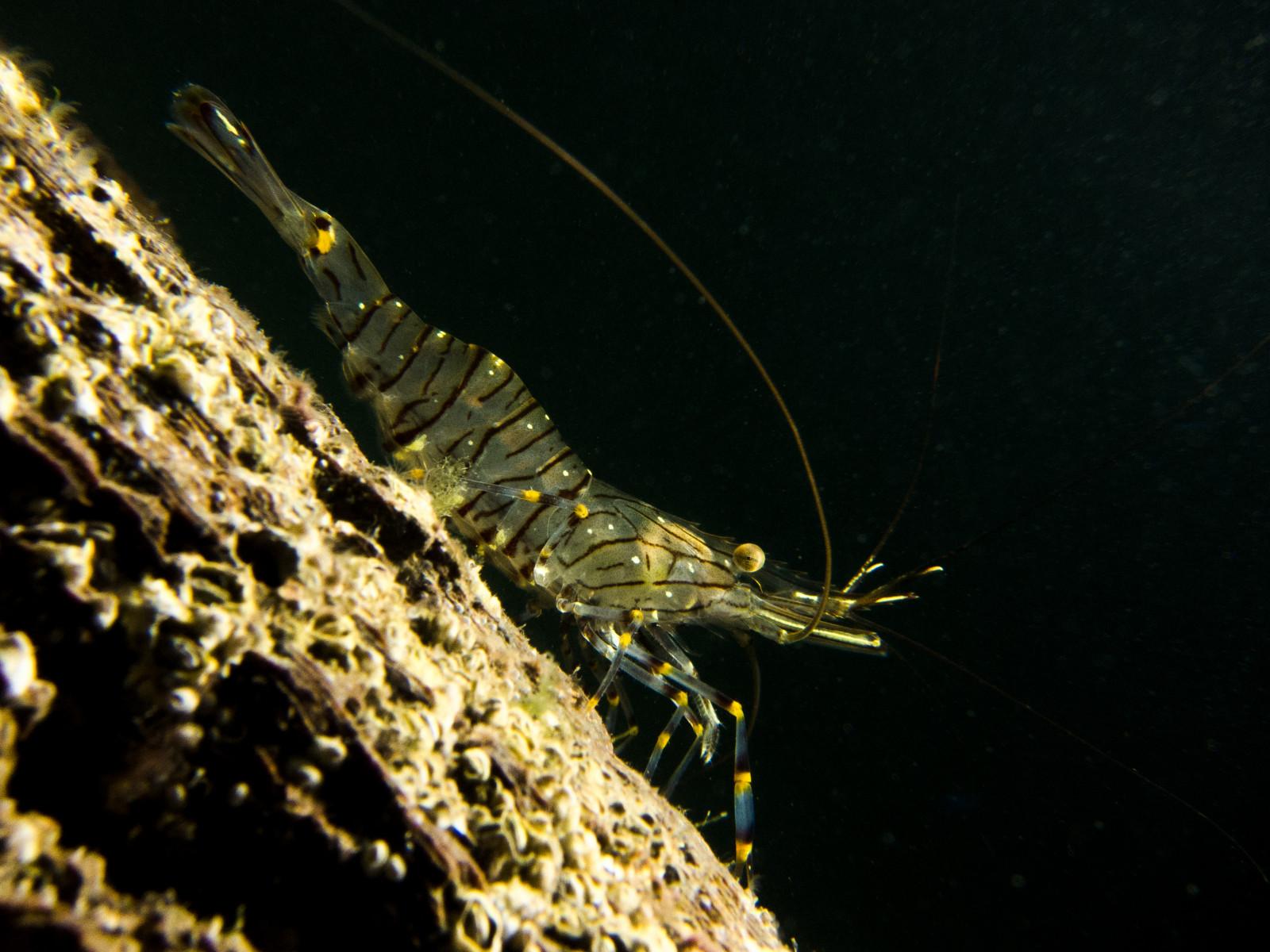 So is a strobe or video light better? When asked by customers about video lights for underwater, the question we ask is ‘how much video do you shoot?’ If the answer is more than 50 percent, then a video light is a good option. The clue is in the name – video lights are what you need for video when you haven’t got enough available light.

For still underwater photography, we’d always recommend a strobe over a video light, as much because of its impact on marine life and other divers as the issue with background exposure control in your pictures.

Constant lighting does, however, offer some fun, creative options particularly in macro photography with coloured and snooted lights being made by a number of manufacturers. They can also be less costly and easier to set up for doing off-camera lighting. We often suggest to customers that they get a focusing light with an auto flash-off function. 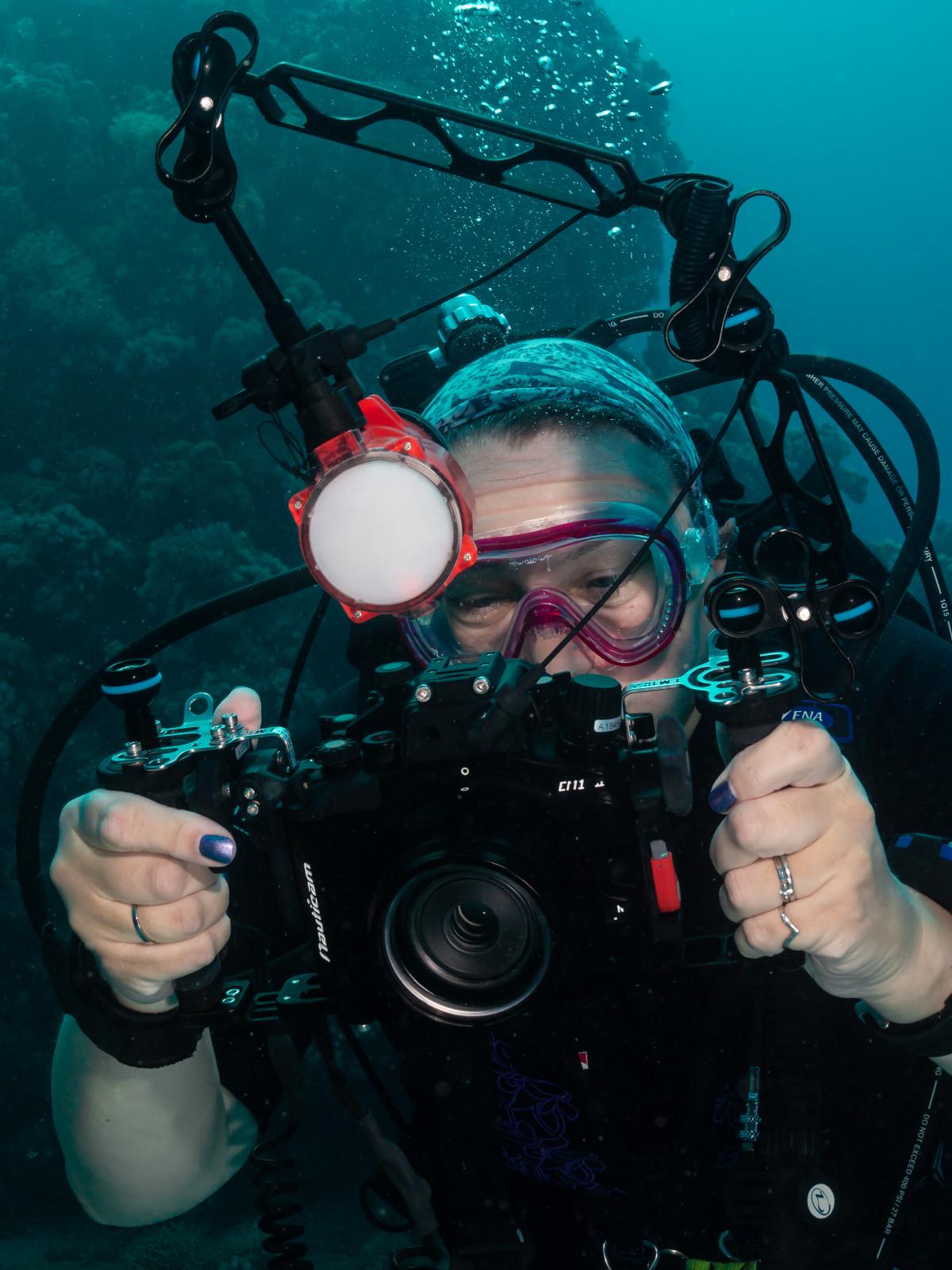 These can be used as a light source for macro photography (beam widths are usually too narrow for wide angle) or when using flash to light your shots you can use it to aid the camera to focus and to see what you are doing when ambient light is low. But overall the best option is to buy a strobe if you are looking for a complete lighting solution for all types of still photography underwater.

TTL and manual strobe modes can also cause confusion. TTL stands for Through The Lens and relates to how cameras control the amount of light their flash puts out. In reality this is how long each flash of light lasts, the brightness of the flash doesn’t actually change. In very simple terms the camera works out how long the flash should stay on for based on how it thinks the exposure of the shot should be.

Cameras do this either by firing a pre-flash and measuring what is reflected back from the subject before firing the flash for the actual shot, by exposure metering to work out how much light needs to be added to the shot, or a combination of both. In all cases the camera uses the information it measures to decide how long the flash fires for. 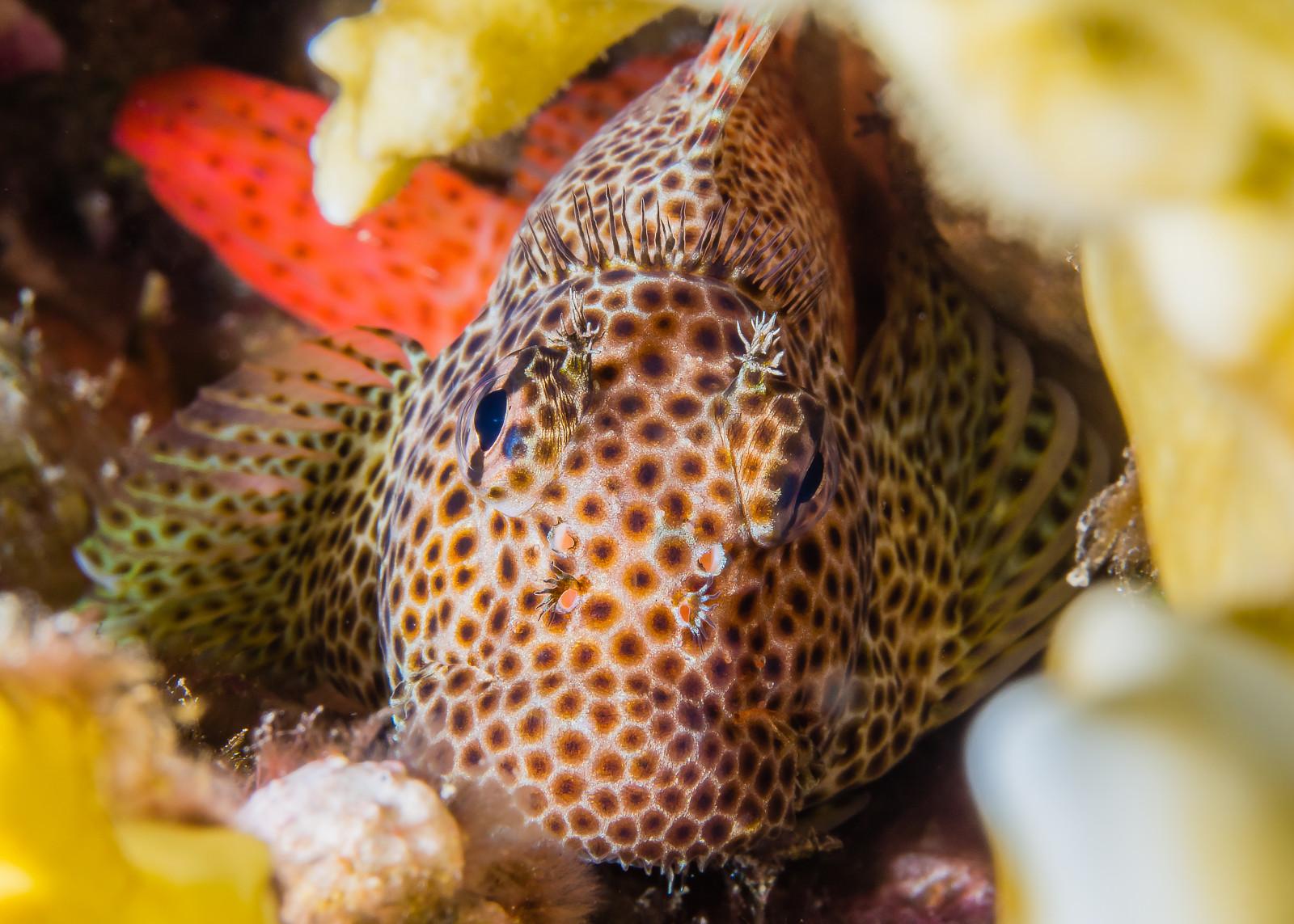 TTL relies on your camera and strobe electronics to decide how your image will be lit and often you’ll find this won’t match what you actually have in mind. This is why almost all the big names in underwater photography shoot with their strobes on manual. From our own experience we’ve rarely used TTL since our first dives with a strobe. Despite what plaudits of TTL say about it being more consistent, we found it actually less so, with many shots not being lit as we would have liked.

Using TTL also means you’ll use more battery life in a lot of cases as you need the camera’s flash to be on Auto for the exposure to be matched. In some cases you can adjust the strobe output while on TTL by setting your camera flash to manual and altering its power, but then you are back to the question ‘why not just alter the strobe output directly?’. All these factors add up to why we’d always recommend buying a strobe with manual controls rather than a TTL-only option.

Guide numbers are used by manufacturers of strobes, but what do they mean? It is basically an expression as a number of how powerful a flash is. Most strobe manufacturers use a guide number based on the flash being fired in air. The number itself is based on a formula of f number x distance = guide number at a constant ISO (INON and Sea & Sea base their GNs on ISO100). 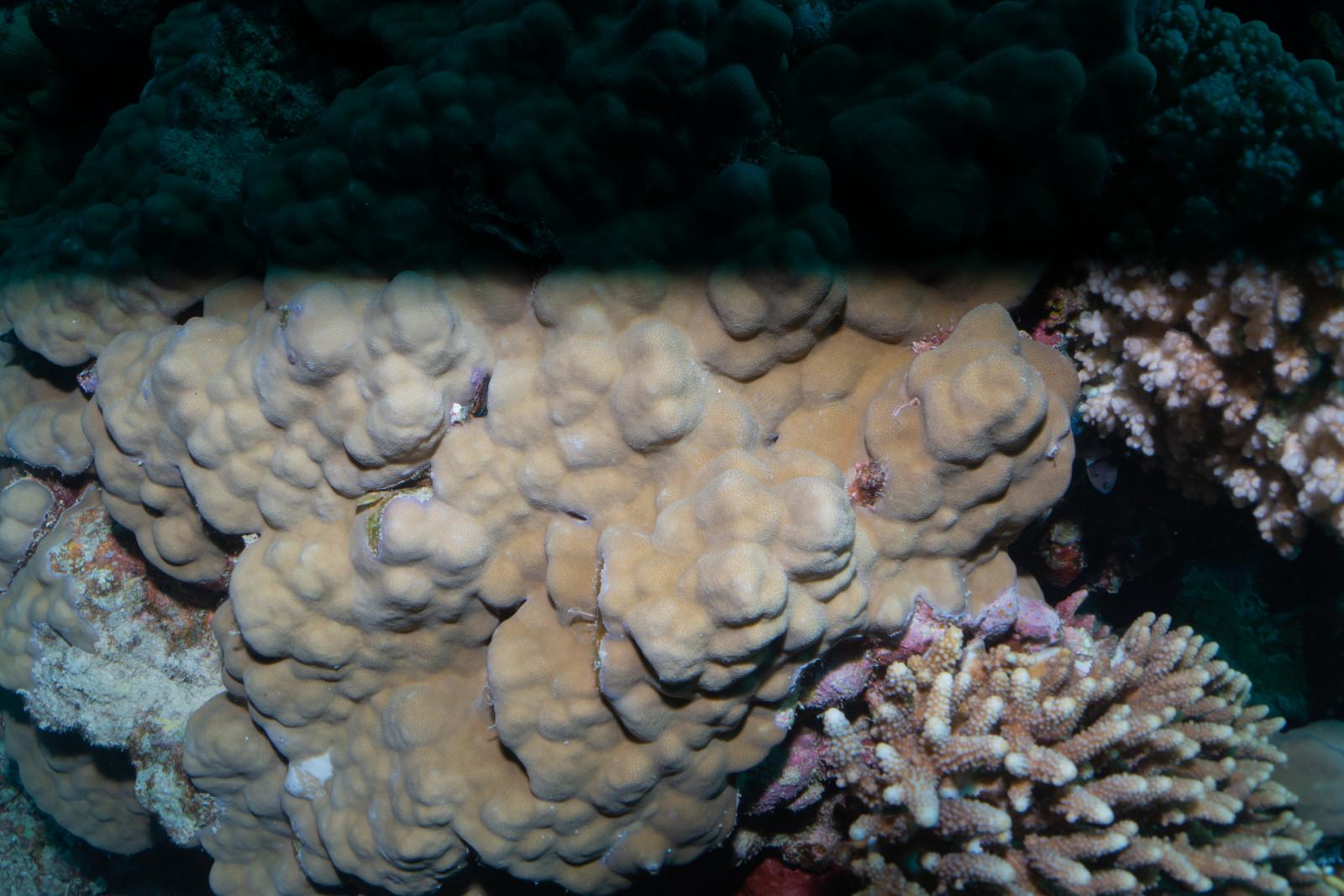 In land photography, this formula can be used for how far away to place a flash of a certain guide number for a particular aperture setting, or what aperture setting to use with your flash at a certain distance. This generally isn’t used in this way for underwater photography, but merely as a number to show how powerful a strobe is at maximum output.

But guide number really doesn’t tell the whole story about a strobe’s output. The spread of a strobe and how even the light from it is are big factors.

A strobe with a narrow beam may have a higher guide number than one with a broader spread but to get the coverage for your shots, you may have to add a diffuser which can reduce its guide number significantly. Ideally you want as even a light as possible so you don’t end up with hot spots or under lit areas in your photos. Diffusers are used to soften the light coming from your strobes, reducing the harshness, which in turn reduces shadows and contrast in your images. They can also change the spread of light, increasing the angle but in doing this the output is reduced. 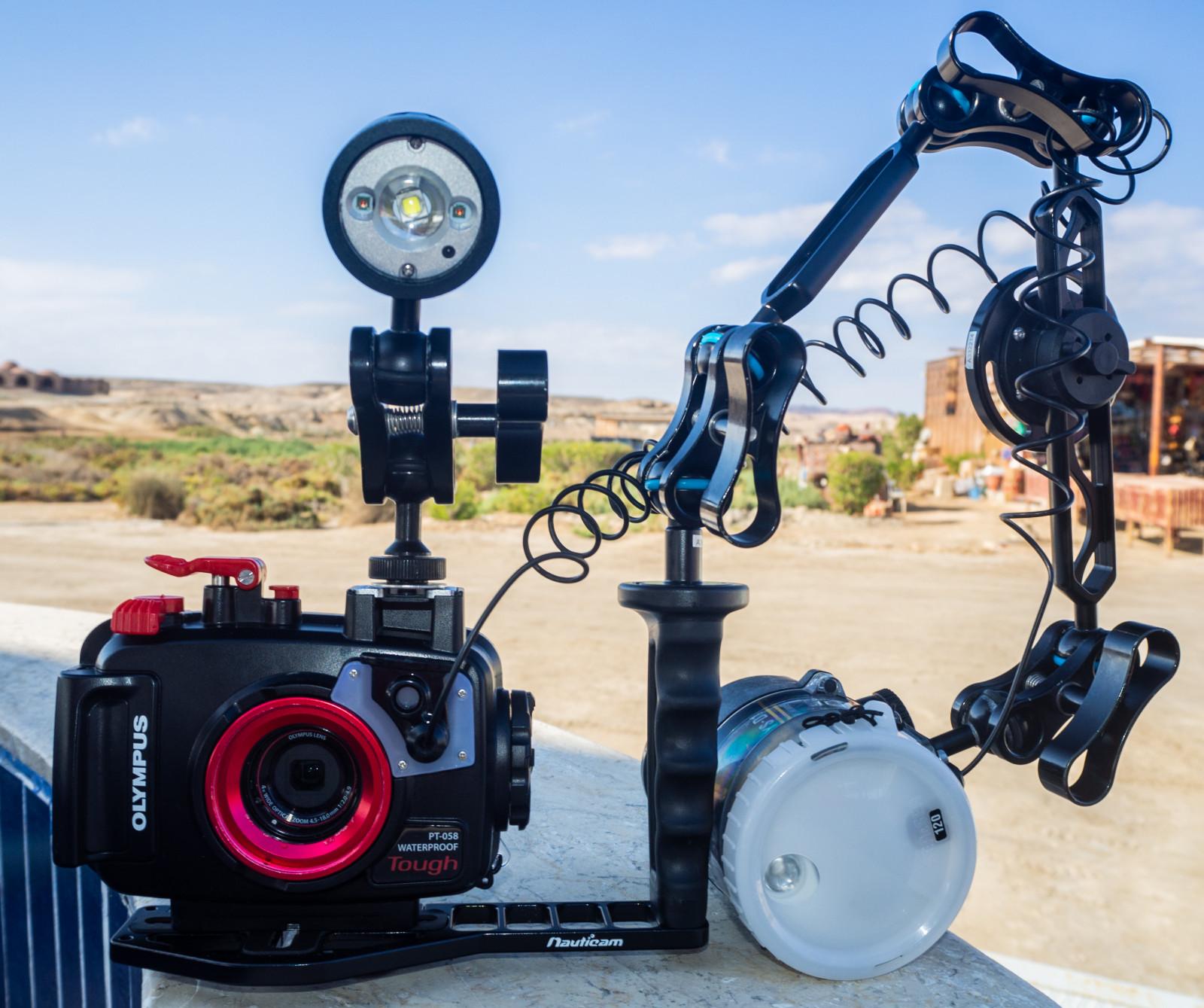 These can be used to give a warmer light than the standard strobe output. Other specialist filters and diffusers for strobes include Neutral Density (ND) filters that significantly reduce strobe output, these can be used in situations when only a very tiny output is wanted from your strobes and even minimum power is too much. They are most likely to be useful when using a very large aperture to achieve a shallow depth of field when doing macro photography. In addition you can buy special blue excitation filters to fit on your strobes that when combined with a yellow filter on your camera allow you to use flash to take pictures of fluorescent marine life.

Another area of questioning is what sync speed is and what effect does it have? Sync speed is the highest shutter speed at which a flash can be used with a camera that has a mechanical shutter with curtains, these are usually in DSLR and mirrorless system cameras. If you exceed the sync speed, you may get shadows appearing on your image caused by one of the shutter curtains. 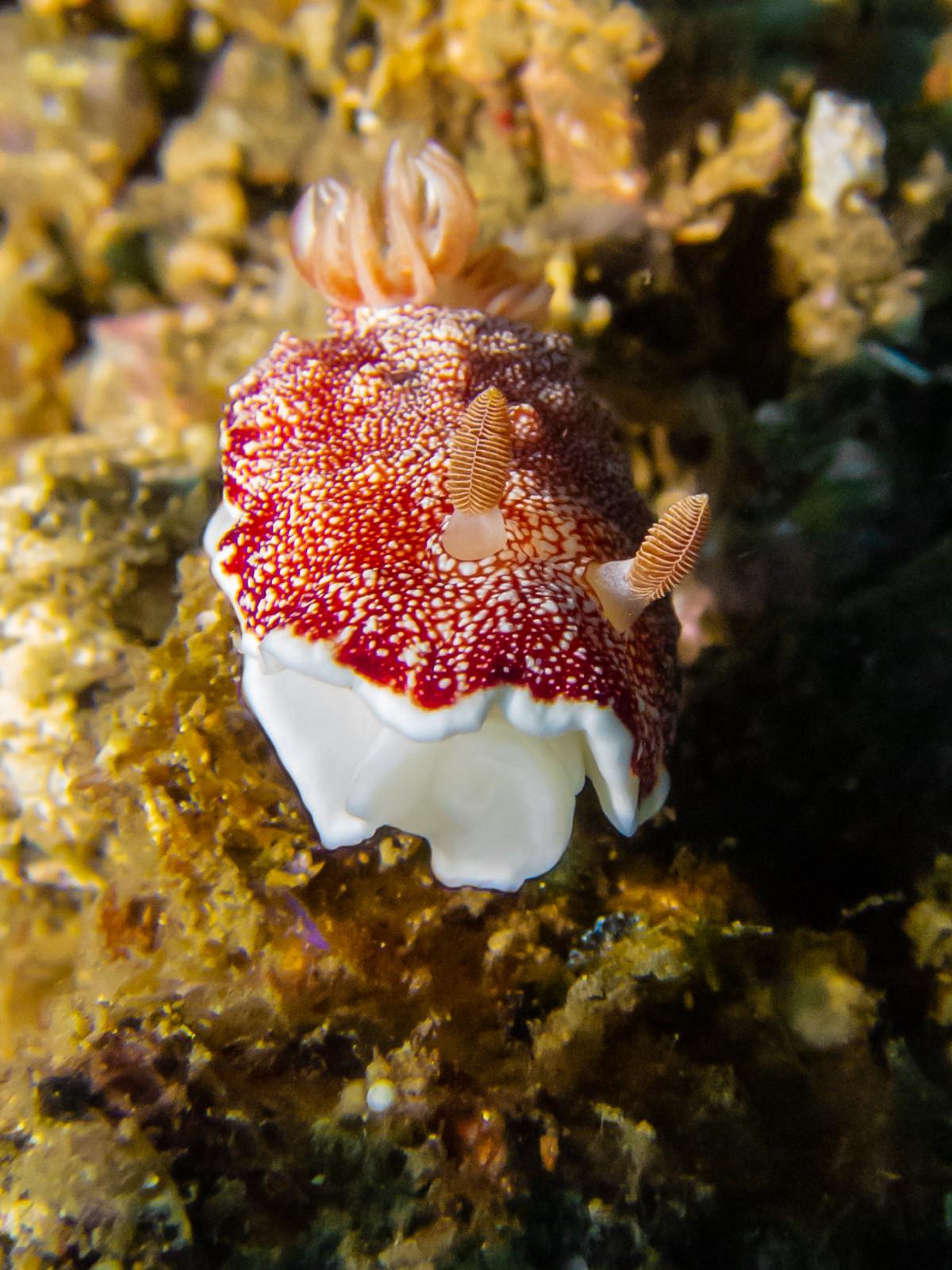 This varies from camera to camera, but as an example the current crop of Olympus OMDs have a sync speed of 1/250. For underwater photographers keen on getting dark backgrounds in their daytime images, a fast sync speed is an important feature when looking to buy a camera.

One of the big pluses of using most compact cameras is because the shutter design is different in that they don’t have a maximum shutter sync speed. This means a dark background can be achieved without too much difficulty as long as your camera allows you to control shutter speed manually. Many compact cameras will let you use flash at shutter speeds of 1/2000sec!

It is possible to buy strobe triggers that connect to a camera hot-shoe (if your camera has one). As well as reducing battery consumption and keeping camera temperature down these can often give you another stop or two of sync speed. For example, taking 1/160 sync speed of the Sony A6500 up to 1/250. These triggers do require space within your housing and because of this aren’t compatible with all housing/camera combinations. 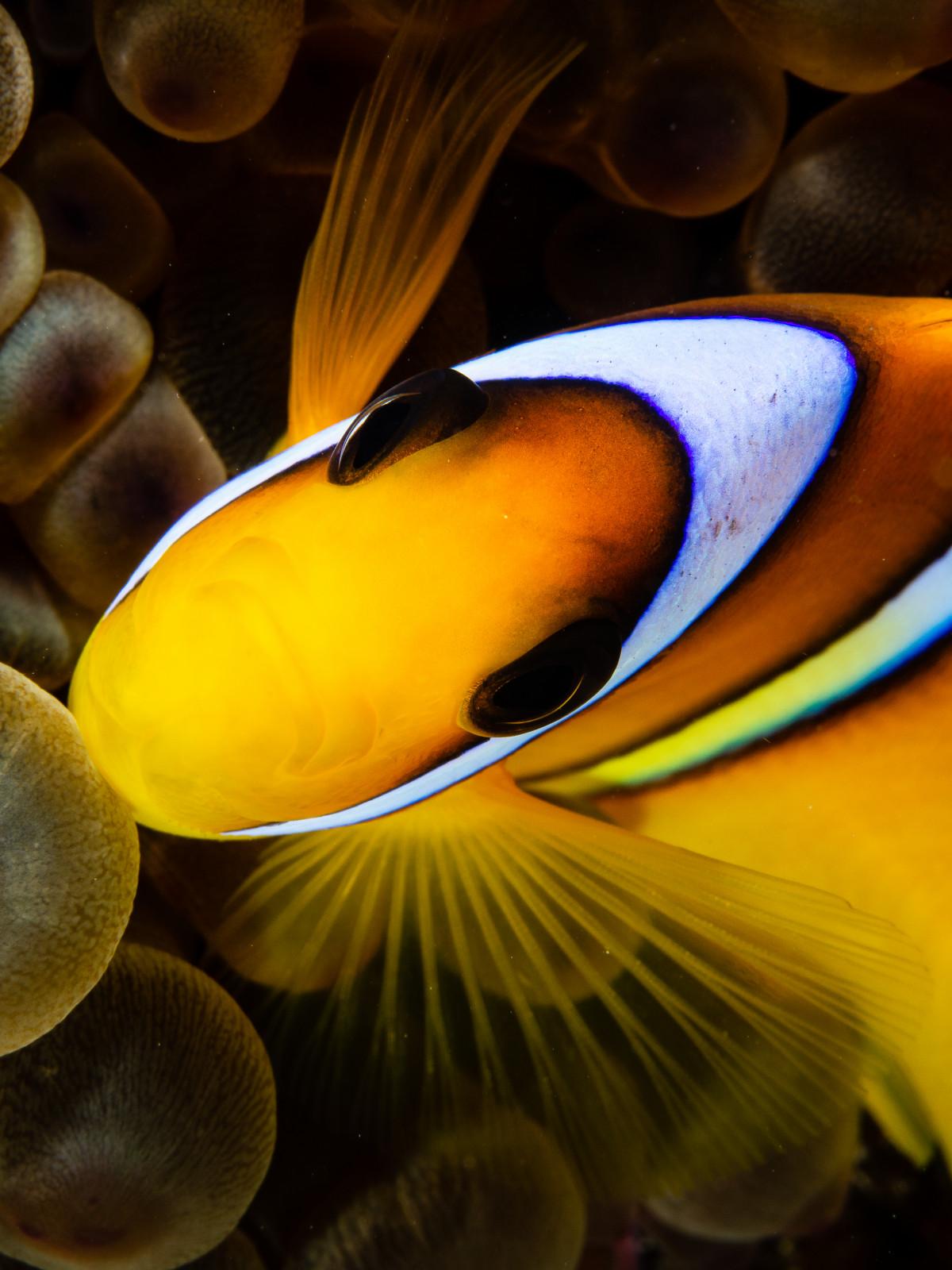 Once you start using a strobe triggered by a built-in flash you may notice a greater drain on the life of your camera battery charge. Here is a great tip for anyone who has a camera with a manual flash setting (sorry Sony users) such as a Canon compacts or Olympus TG5 or mirrorless.

If you are using your strobe on manual rather than TTL, you can set the built-in flash on your camera to its lowest output, and it will still trigger a strobe via a fibre-optic cable. For Canon compacts, there is a choice of three settings, put it on minimum. For Olympus users, either the TG5 or a micro four-thirds, you can set it down to 1/64 power and most other cameras will let you do similar.

If you don’t have a manual flash control but are using the strobe on manual, you can reduce flash output to some degree by using Flash Compensation to skew it. 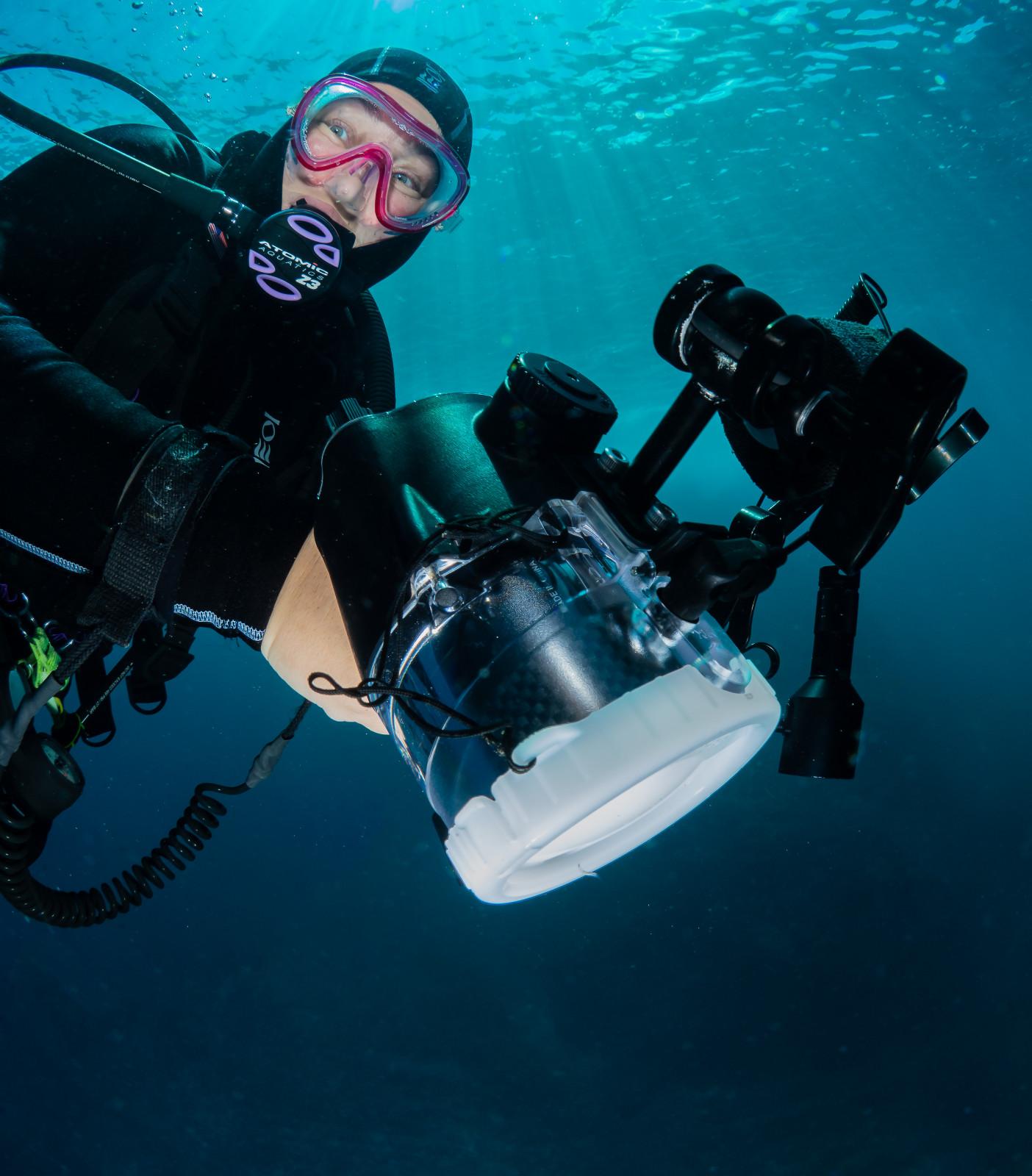 By reducing flash output you’ll get more shots out of your camera battery and reduce heat produced by the camera, which can lead to fogging inside your housing port, particularly with large polymer housings.

While this may have whetted your appetite to buy a strobe set-up don’t be dismayed if you haven’t the budget, you can achieve quite a lot with built in flash or available light. That’s how we started out.