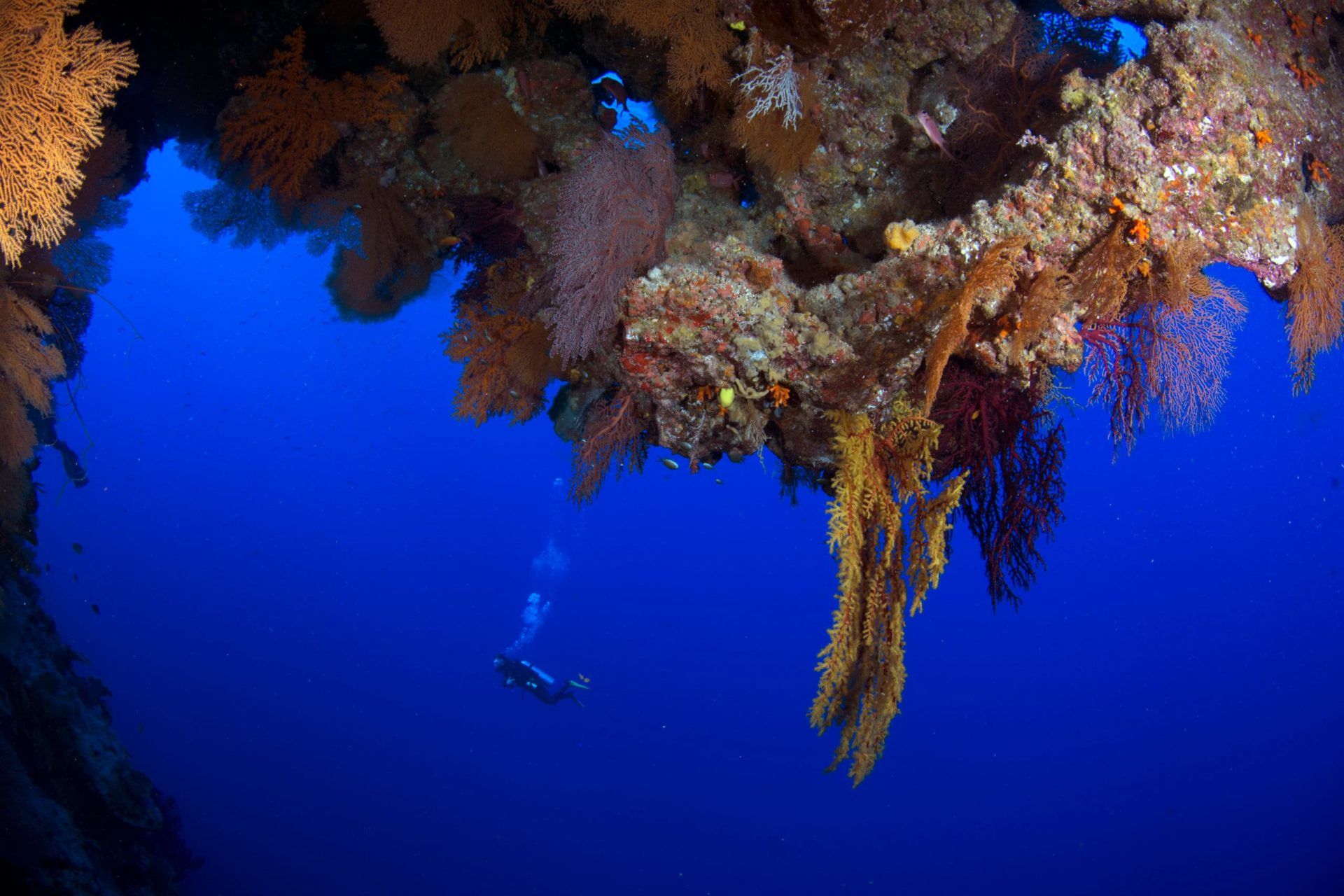 For the second part of my 10-day adventure to Cairns, I was headed out to the Coral Sea and Ribbon reefs. In this issue I will be focusing on the world-renowned diving of the Coral Sea and next month the equally impressive Ribbon Reefs will be featured.

My home/office for the next five days would be on board the legendary Mike Ball Dive Expeditions impressive vessel Spoilsport. This large twin-hulled purpose-built liveaboard has been plying these waters since 1986 and is an excellent platform for diving at the distant reefs of the region.

This multi award-winning boat is large and spacious, with a huge sun deck, a comfortable saloon, a generous alfresco seating area and well-proportioned cabins. There is ample room on the back-dive deck, and it is clear that a lot of thought has gone into this area. There is plenty of space for tech divers and photographers to prepare and store their equipment without getting in anyone’s way, and without fear for having valuable gear accidentally damaged.

Elevated platforms at eye level, so you could view images without having to hunch over your camera awkwardly, were a particularly nice touch. As was the special air gun for drying of your camera, should the need for a hasty change of battery or memory card be required.

Social distancing meant that there was even more room on Spoilsport than usual and as I was a single traveller, COVID safe rules dictated that I be placed in a cabin on my own, so there really is a silver lining to most situations. However, on reflection, I would have happily shared a cabin in exchange for COVID to have never reared its ugly head and ruined most of 2020.

After we were given the mandatory safety briefings, we were informed about what we could expect from the trip and the dive sites that we would be visiting. It is usually at this point that my excitement begins to build, and the possibility of what might be in store allows my imagination to run wild, on this occasion fuelled even further by the excellent weather conditions we were experiencing. The clam seas and minimal wind speed meant that in addition to visiting the stunning Osprey reef, we also would be afforded the chance to explore Bougainville reef.

So, what makes the Coral Sea such a special place to dive, the answer to that question is simply geography, take osprey reef, for example, have a look at a marine map or if you were born in this century download an app and look at its location and topography.

Osprey Reef is a lone sentinel in the middle of the coral sea, 60 km from the nearest reef, 350 km from Cairns and separated from the continental shelf by a vast deep-water trench. Its isolation is complete. This spectacular coral atoll rises almost vertically, a staggering 1000 meters from the ocean floor. It is 25 km in length, 12 KM wide and covers an area of 195 Square KM. A confluence of ocean currents meets here, delivering all the nutrients needed for a healthy ecosystem and visibility can be anywhere from 30 to 60 meters.

In short, this reef has all the necessary ingredients to support abundant coral growth, thriving fish populations, and to attract a whole host of apex predators and pelagic fish. One of the smallest fish in the oceans, the stout infant fish, inhabits the shallow lagoon at the summit of the reef. The Nautilus, described as a living fossil, can be found in the reef’s depths and Manta rays, hammerhead sharks and silvertip sharks are all regular visitors. Not to mention the resident grey reef, blacktip sharks and white tip sharks that are ever-present.

Its neighbour to the south and our first port of call was the equally impressive Bougainville reef. Although much smaller at only 4km in diameter, it too spears to the surface from a depth of 1000m and is subjected to the same currents that make Osprey Reef so prolific. Bougainville also has a colourful history. It was given its name as a tribute to Louis-Antoine de Bougainville, the French explorer who almost reached the shores of Australia before Captain James cook.

He made it as far as Bougainville reef where he noticed what looked like an interpretable line of breakers on the horizon. This was the great barrier reef, assuming that he would not be able to get past this immense obstacle to instead headed north to Papua New Guinea. Bougainville also boasts the remains of two shipwrecks a freighter called the Atlas and the Antonio Tarabocchia, a cargo ship that ran aground in November 1961.

In more recent times Bougainville has had to contend with coral bleaching and cyclone damage, which makes the excellent state of the reef today even more impressive. Perhaps its isolation and the currents that bring so much nutrient-rich water helped revitalise the corals on this reef so quickly. The sites we visited were covered in an impressive array of hard corals. So, far from soaring over ghostly white plains of dead coral skeletons, we were treated to the pastel hues of layer upon layer of health coral growth. With a health reef comes a thriving ecosystem.

The Spectacular hard coral coverage provides a haven for a myriad of small reef fish, Chromis, anthias and the ever-present anemone fish, which in turn attached the attention of lager predatory fish. We encountered large schools of barracuda, colossal potato cod, Impressive tuna, and aggressive trevallies on the first dive alone. The second dive provided encounters with blacktip reef sharks, maori wrasse, jacks and even a substantial green turtle and the shear, plummeting walls add an additional layer of drama to diving on this prestigious reef.

The suburb weather condition even allowed us to venture to the far side of the reef where the scattered remains of the Antonio Tarabocchia are located, giving the area the look of a watery modern art installation. The huge engine block sheltered a congregation of black and white snapper and the boiler, which was in slightly deeper water was covered in coral and teeming with marine life.

This side of the reef is more exposed to the punishing weather of the open ocean, and therefore the coral is more stunted providing a stark contrast to the towering coral columns of the more sheltered side of the reef, still there is plenty of life in this area, with carpet anemones and resident clownfish, solider fish, rabbitfish and yellow stripped snapper all swaying back and forth in the gentle swell.

After the last dive we travelled overnight to our next destination, Osprey Reef and while Bougainville reef was superb, Osprey reef, in my humble opinion, takes things to the next level. Our first dive of the day was at the impressive false entrance, a site that brought home the sheer magnitude of the reef. Snaking sandy gullies cut a path through hard coral-encrusted ridges, making their way from the tranquil inner lagoon to the ore inspiring 1000m drop off.

A massive school of barracuda lazily swirling in the blue next to the boat greeted our entry, joined by a large school of big-eyed jacks and several juvenile blacktip reef sharks. Hard coral, soft corals, sponges and sea fans all jostled for space on the overcrowded reef, and there was plenty of additional marine life at this magnificent site including white tip reef sharks, turtles, schools of fusiliers and snapper to name just a few.

Next up was the legendary North Horn and Soft Coral Wall. Located at the northernmost tip of Osprey reef this is where two walls converge, and a small sloping plateau has formed. The perfect place for predators to congregate as the currents push out to the open ocean and which also makes this location the ideal place for the shark attraction dive. As we waited patiently for the show to begin the sharks began to assemble in more significant numbers.

When the cage containing an assortment of fish heads was lowered down to the reef floor, the excitement started to build, for both divers and sharks alike. As the contents of the cage were released the gathering of grey and whitetip reef sharks exploded into a maelstrom of thrashing tails and snapping teeth. Within a couple of adrenaline-packed minutes, the frantic action was over, and the sharks gradually dispersed over the reef, most merely relocating to the tip of North Horn where the current had begun to pick up.

After the excitement of the shark feed, there was still plenty of time to enjoy the stunning Soft Coral Wall. A multi coloured patchwork of broccoli corals, sea fans and whip corals painted almost every inch of the reef in an explosion of colour that would put the most vibrant of Picassos to shame. Grey and white tip reef sharks patrolled this lavishly coloured wall, and a large school of jacks shimmered in front of a deep blue background.

For avid photographers Mike Ball Dive Expeditions offer the opportunity of a private shoot with the sharks for the third dive. While most of the group were dropped at the far end of

Soft Coral Wall my buddy and I were treated to a private audience with the sharks. On this occasion, they were not fed but attracted by the smell of a fish head in a small cage. This lures the sharks in but does not result in a feeding frenzy, thus allowing a closer interaction. Once again after photographing the sharks for about 20 minutes, there was still plenty of time to enjoy the incredible soft corals that this area boosts, with overhangs dripping in sea fans and soft corals of every size and colour jostling for space.

The final dive at Admiralty Anchor was another great dive. Here a dramatic landscape of canyons, ridges, towering bommies and endless swim-through is perched on top of the precipice of the reef. Juvenile white tip reef sharks seek shelter and a reprieve from the rigours of life on the reef; it is a place where turtles roam and a myriad of reef fish called home.

With the first part of the trip completed, it was time to depart this isolated and spectacular region. The ocean wilderness of the Coral Sea offers some truly world-class diving, stunning vertical soft coral gardens, towering hard coral structures and animal encounters with everything from sharks and manta rays down to nudibranchs and a variety of other tiny critters.

The majestic Osprey Reef should definitely be on every diver’s bucket list. 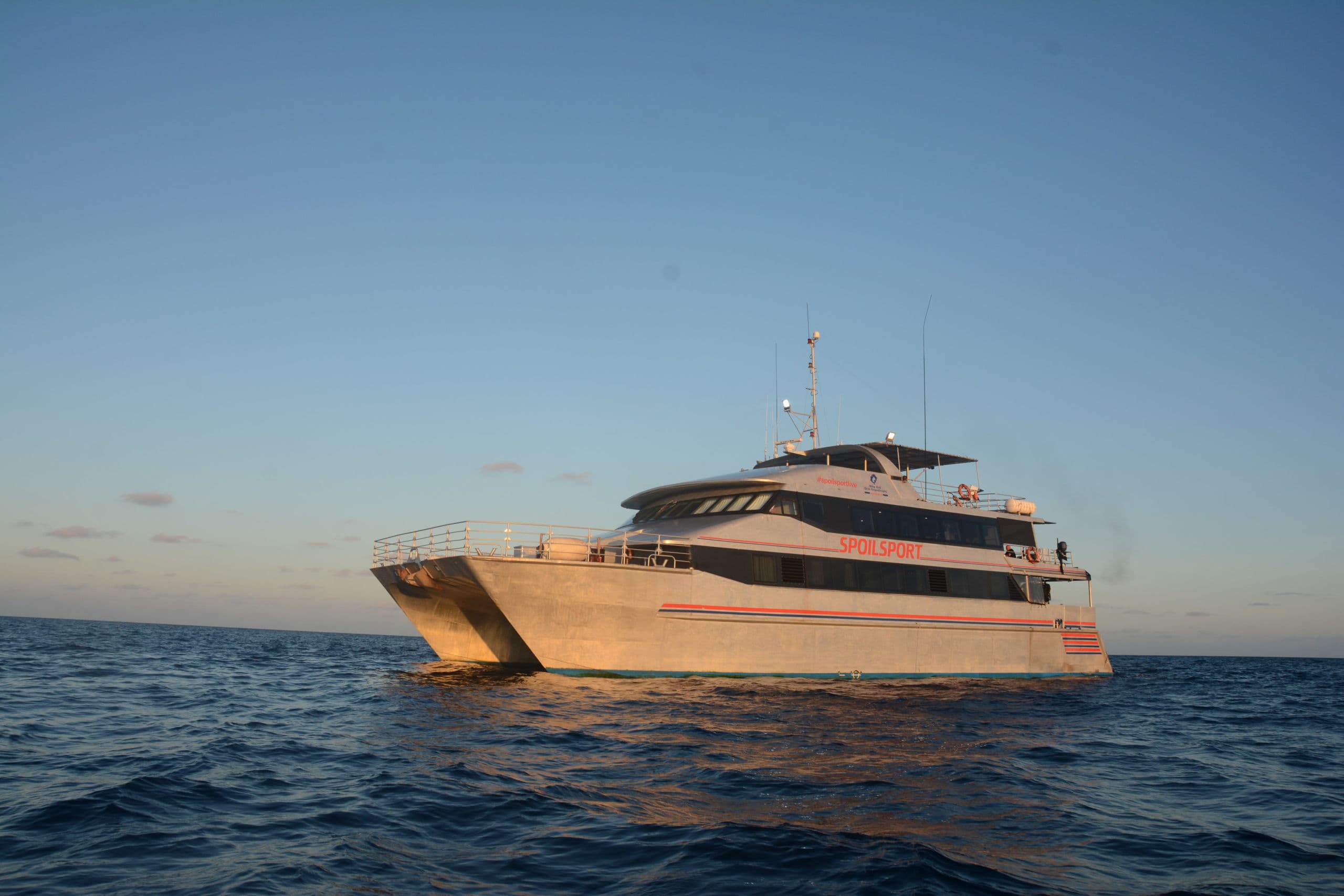 For more about diving from Cairns try: