Lembeh, North Sulawesi, Indonesia. The Mecca for macro. I came to this haven for the craziest-looking creatures in the sea with the fantastic photographer Wiliam Tan. This small body of water causes underwater photographers to flock here en masse. How come? Well, all living animals are classified into 34 phyla (divisions of life categorised by body plan). The more phyla found in a location, the more impressive its biodiversity. Rainforests, normally considered an ecosystem brimming with diversity, holds 17 phyla. The waters of Lembeh Strait is home to 32 phyla.

Diving in this strange landscape, black sand of a shipping lane, is like a treasure hunt. My dive guide, with eyes like a mantis shrimp, and I search for the weirdest and most-wonderful creatures. Pygmy seahorses, hairy frogfish, mantis shrimp, blue-ringed octopus and nudibranch galore! 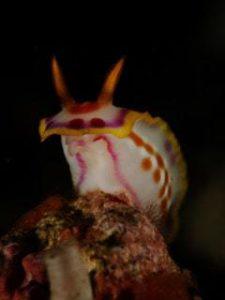 But William had been to Lembeh many times before. So much so that he had taken a picture of every animal that lives there. His reason for coming back with me was to push his macro photography to the next level. Black water diving.

In the pitch-black of the night, we would head out to the middle of the Strait where it dropped down to 60m. William would suspend a superbright torch at 15m. With only the glowing torch as a reference point, you float in the utter blackness of the water.

You’d think that this darkness would be void of life? Far from it. The beacon of the marker torch enticed creatures from the deep and dark, like a moth to a flame. It turned the black water thick with life. You float alongside animals that live in a three-dimensional habitat, inertia and viscosity of the water has different rules for smaller creatures of the sea. They’re not bound to sinking and so instead hang or zoom around in all different directions in a world liberated from gravity. 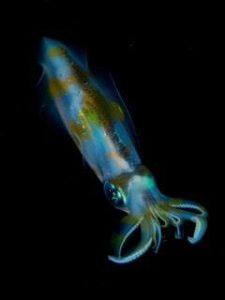 Long translucent strings of gelatinous jelly creatures – sea squirts – hang like ribbons. The voracious arrow worm, only the length of your little finger nail, snaps its deadly jaws at passing prey. And curious squid glide towards your light beam and use it to highlight their next prey.

William hunted to take shots of larvae, marine creatures that spend their juvenile stages of life floating in the plankton. I tried my best to keep up with these macroscopic creatures, but they were too fast, too small, too agile in their domain.

However, among this wonder, there was a tonne of plastic. Oh yes, the biggest threat of modern time on the sea was present in this wonderland. It was heart breaking to see plastic on the beaches, on the seabed and hanging in the water column. There was an attitude among the locals that it was okay for the plastic to be there, because to them, it had always been there. A sad thought to leave this incredible location with but the animals will cope and slowly adapt. The question is, can we? 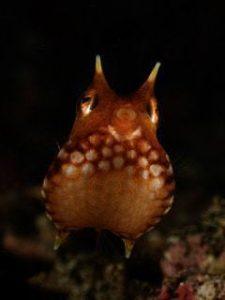