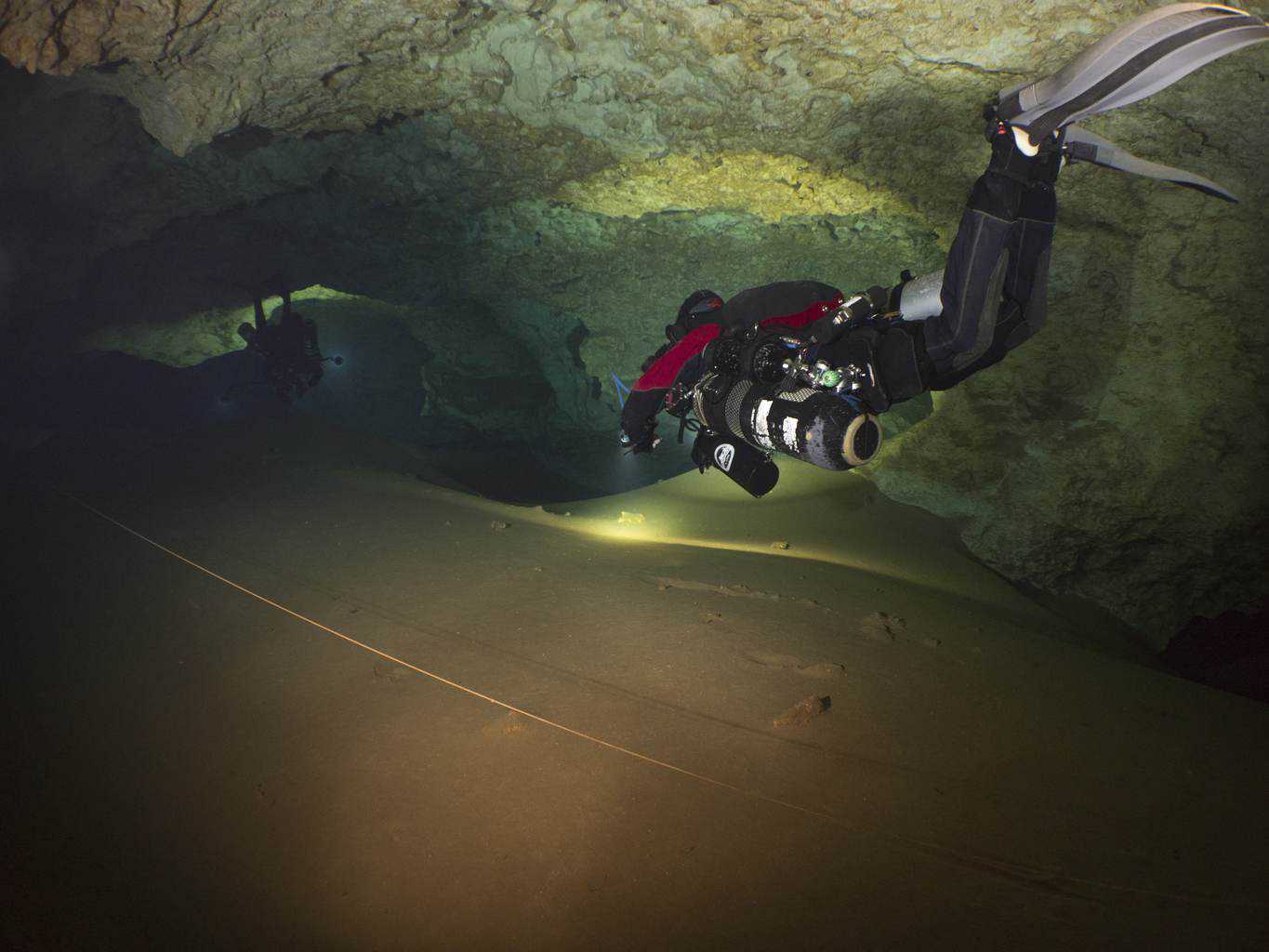 Towards the end of my year as the Scholar, the diving adventures keep getting more and more exciting. Last month, I was invited to join a cave film shoot with Evan Kovacs from the Woods Hole Oceanographic Advanced Imaging and Visualization Lab. Thereafter, I flew out to the Falkland Islands and joined a scientific expedition to King George Bay.

After two months away from the rebreather and cave diving, I decided to head to Northern Florida a week before the intended start of the film shoot for some check-out diving. Derek Ferguson took me for some extraordinary dives in the Jug Hole and Ginnie Springs. Right away, my love for the liquid underworld flared up and I quickly felt comfortable and confident again exploring the caves around High Springs. But Evan Kovacs kept something very special in the bag for me: the caves of the Mill Pond at Marianna, about three hours west of cave country.

The Mill Pond is the closest I’ve been to paradise on Earth, above and below its surface. On the first dive to this cave, Jackson Blue revealed itself as the most beautiful of the Florida Springs that I have dived so far. Evan and I spent the dive familiarizing ourselves with the main tunnel and looking for potential areas for filming. The perfectly white limestone makes this location ideal for any camera work. The spring pumps water out of the cave at exhilarating speeds, which keeps the tunnels from silting out and gives it a beautiful deep blue hue. Jackson Blue is certainly a befitting name for the cave.

20,000 lumen video lights banned the darkness from the caves during our shoot and completely transformed the passages of Jackson Blue: details became apparent where dim light usually only allows you to see rough outlines. But in the largest chambers, even the most powerful lights could not beat the looming dark. Shadows danced and conquered the corners of ancient domes, formed by millennia of karstification. Hundreds of feet away from the entrance without any natural light, however, darkness turns into a companion — almost like an old friend who welcomes you to a different world. 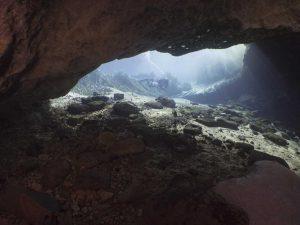 The absence of light and effort involved to achieve good artificial illumination really made me appreciate underwater lighting. As cave divers, we have the opportunity to return with photos and videos of places that very few have the chance to visit. A cave dive is also a journey through geological history, showcasing ancient seabed, fossils and corrosive processes. For the Woods Hole Advanced Imaging Lab, it is also the best place to test underwater filming equipment in complete darkness, that is otherwise only found in aphotic zone of the ocean, at depths of 600m and beyond. Evan’s ability to bring light into a cave and capture the mood was a revelation that changed my attitude to videography and photography.

After some very exciting film shoots, we took to dive the Hole in the Wall. Despite its belittling name, this cave falls nothing short of Jackson Blue. While visibility is a little lower because of little to no flow in the main passage, the narrow side tunnels take intriguing twists and turns that lead to fascinating fissures in the rock — which allow you to jump from one level of the cave to another. The white cave line, which marks explored passages, blends in almost perfectly with the chalky rocks, making it hard to distinguish and easy to lose track. We reached the end of the upstream line at a depth of only 10m, where another exit must have collapsed decades if not centuries ago. There we turned, and made our way back towards the exit.

From Florida, I headed to the Falklands, the furthest south and possibly remotest place that I have travelled to so far. As a British Overseas Territory, the Falklands moved into the geopolitical focus during the 1982 conflict following the Argentinian invasion of the island archipelago. Despite its location 300 miles off the Argentinian coast and 7,000 miles away from the UK, these islands couldn’t be any more British. The landscape across the islands is reminiscent of the Scottish Lowlands and Highlands. However, the underwater life is as different as a cold-temperate environment could be. There is a wild mix of species from the Pacific, Antarctica and the South Atlantic. While I could recognize some familiar sights from Chilean Patagonia, the majority of life underwater was new to me. Geographically so remote, the Falkland’s marine environment is generally underexplored and understudied. To fill in this blank spot on the map, Paul Brickle founded the South Atlantic Environmental Research Institute (SAERI) four years ago. Joining Paul, SAERI and the Shallow Marine Survey Group to dive in the waters of the South Atlantic was a dream come true. 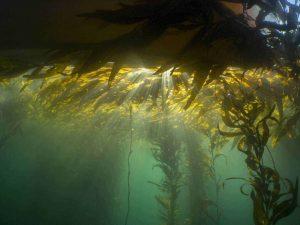 Unfortunately, my luggage was delayed in Santiago Airport and didn’t make it to the Falklands. With only one flight a week, I had to make do without my diving equipment for the expedition to Roy Cove, King George Bay on West Falkland. This made it painfully evident how remote we were, on an island with only 300 inhabitants and local island flights operating more like a taxi service than on a regular schedule. Yet with borrowed dive gear, I got to discover the South Atlantic for myself and contribute to the environmental baseline survey of King George Bay. It is a huge privilege to dive sites that no one has been to before, and it is even more satisfying to return with quantifiable biological data. We focused our efforts along short transects, recorded the physical environment and split further tasks within buddy teams. My buddy Joost, a local diver and scientist with great taxonomic knowledge, counted and recorded the species along a 20 metre transect while I came up behind him photographing quadrats for computer analysis.

The light attenuating through the kelp transformed the dive sites into magical forests. In my limited diving experience, the diversity and abundance of life underwater in the Falklands is second to no other in the Atlantic Ocean. Our occasional encounters with fur seals underwater and countless dolphins as well as whales on the surface made the expedition even more exciting. Overall, the trip and survey work in the Falklands was a great introduction to the marine environment of the South Atlantic, and I hope to return there soon. There are wide opportunities for exploration and research in the Falklands, and I have only scraped its surface.