Day two in Grenada began with a very early start. Eco Dive – our dive hosts for the day – had invited us along to their early morning pre-breakfast dive trip, which involved the alarm clock chirping away at 4.30am…

However, a splash of water over the face and then a steaming hot fresh cup of nutmeg coffee at the dive centre and we were ready for action. Day dawned over Grenada just as we were heading into the water, and the dive got progressively brighter as the day wore on. We were diving Purple Rain – no, not named after the song by the diminutive late pop star, but for the shoals of colourful Creole wrasse that swarm over the reef in mid-water – and were astounded by the pristine coral and sponge growth. Plenty of marine life, including a nice flatworm, various morays, grouper and lobster. 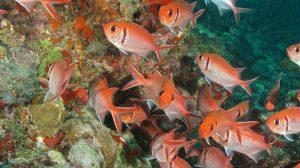 We followed this up with a nice two-tank morning dive, the first spot being Whibble Reef, which is the reef you end up on when you drift off the wreck of the ‘Titanic of the Caribbean', the liner Bianca C. Again, stunning array of marine growth, including veritable trees of soft coral and huge barrel sponges, bent into all sorts of weird and wonderful shapes because of the persistent current. 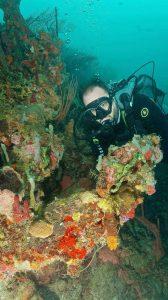 The afternoon saw us clock up a fourth dive, with a swift drift through Happy Valley, which is a nice sloping reef wall which, in places, gets quite vertical and is pockmarked with nooks and crannies providing hiding places for lobster, crabs and the invasive lion fish, which the centres on the island are getting quite adept at spearing and removing from the reef. There is also a photogenic ancient anchor embedded into the reef which is absolutely smothered in encrusting growth.