The Scuba Diver team have been on the move, transiting to Carriacou and enjoying some chilled-out island diving as well as getting involved with local entertainment on an evening.

Yesterday we were out of the water, busy checking out of our hotel on Grenada and then boarding the ferry to travel to Carriacou, Grenada's smaller, quieter sibling island, some 20 miles north east. Alas, the wind had moved in, so it was a three-hour epic through big seas, which made at least one member of the team a little green around the gills!

However, we finally made it, and then after checking in to our basic-but-comfortable accommodation at John's Unique Inn, we embarked on a whirlwind island tour to see some of the sights on Carriacou. 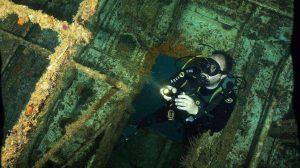 Today we were back out on and in the water, diving some wrecks and reefs with Lumbadive. First up was the 30-metre-long wreck of the tugboat Westsider, but we ended up seeing this and its near-neighbour the Boris (another tug boat) after storms had removed the buoy and we had to go old-style and do a bit of a search! Both wrecks sit in some 28m and can be dived individually or, if you have the air capacity, as a dual-site dive. The Westsider went down in September 2004 and the Boris in September 2007, but although they have only been down a relatively short time, they both boast spectacular amounts of encrusting marine growth, especially the former. 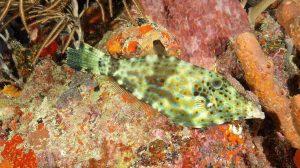 After a tasty lunch, we headed out for two reef dives, White Sand Beach and Tropical Hill. Alas, the torrential rain and wind that had greeted us as we wandered downstairs for breakfast had hammered the conditions underwater somewhat (particularly on afternoon dive number one), and so vis was not the greatest, however, we still saw nurse sharks, southern stingrays, jacks, shoals of wrasse and snapper, clouds of sergeant majors and damselfish, angelfish, pufferfish, cowfish, butterflyfish, and many more reef dwellers.

We then rounded out the night with some local entertainment and food at Tanty Mavis', where we had tasty barbecue chicken and were serenaded by some of the yacht folks who got up and sang, with accompaniment from local drummers.