Iceland’s Silfra dive site is revered around the world 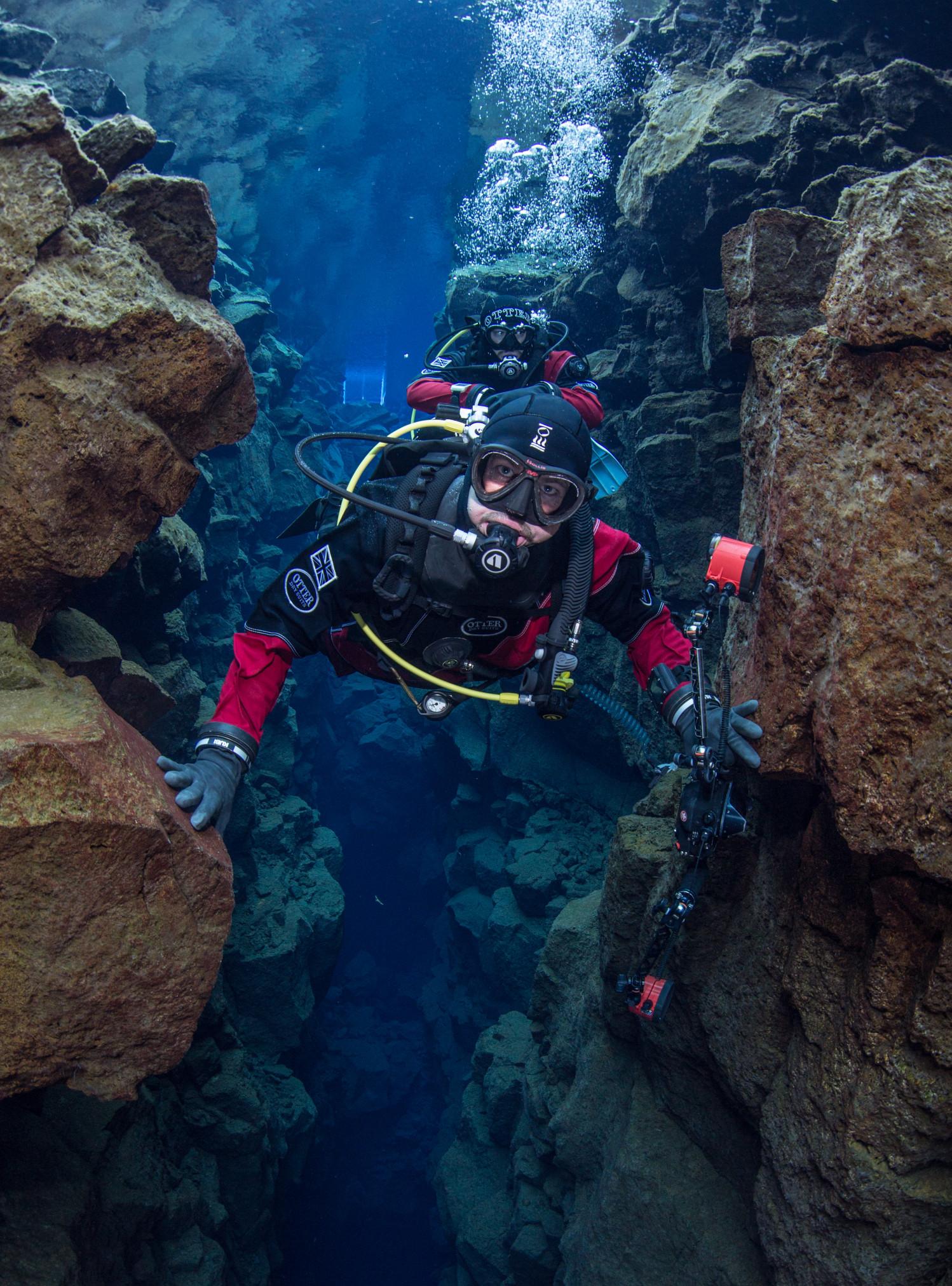 The best of both worlds The ‘dream luxury dive vacation’...
Contents hide
1 Iceland’s Silfra dive site is revered around the world, but as Mark Evans found out, there is much more to this dramatic island than this singular iconic location
1.1 More than just Silfra…

Iceland’s Silfra dive site is revered around the world, but as Mark Evans found out, there is much more to this dramatic island than this singular iconic location

Walking from the car park in full dive kit, mask and fins in one hand, camera in the other, the excitement in our merry little band was palpable. As we neared the entry point, we caught tantalising glimpses of the dive site – a location I had seen countless images of, but was now finally going to dive for myself. Climbing down the metal stairs to the water’s edge and fitting my mask and fins into place, I took a giant stride into the impossibly clear water and, after getting over the shock of the intensely cold water hitting my face and creeping up inside my hood, the realisation struck me – I was finally diving in Silfra, Iceland’s world-famous dive site and one of the most-unique locations on the planet. 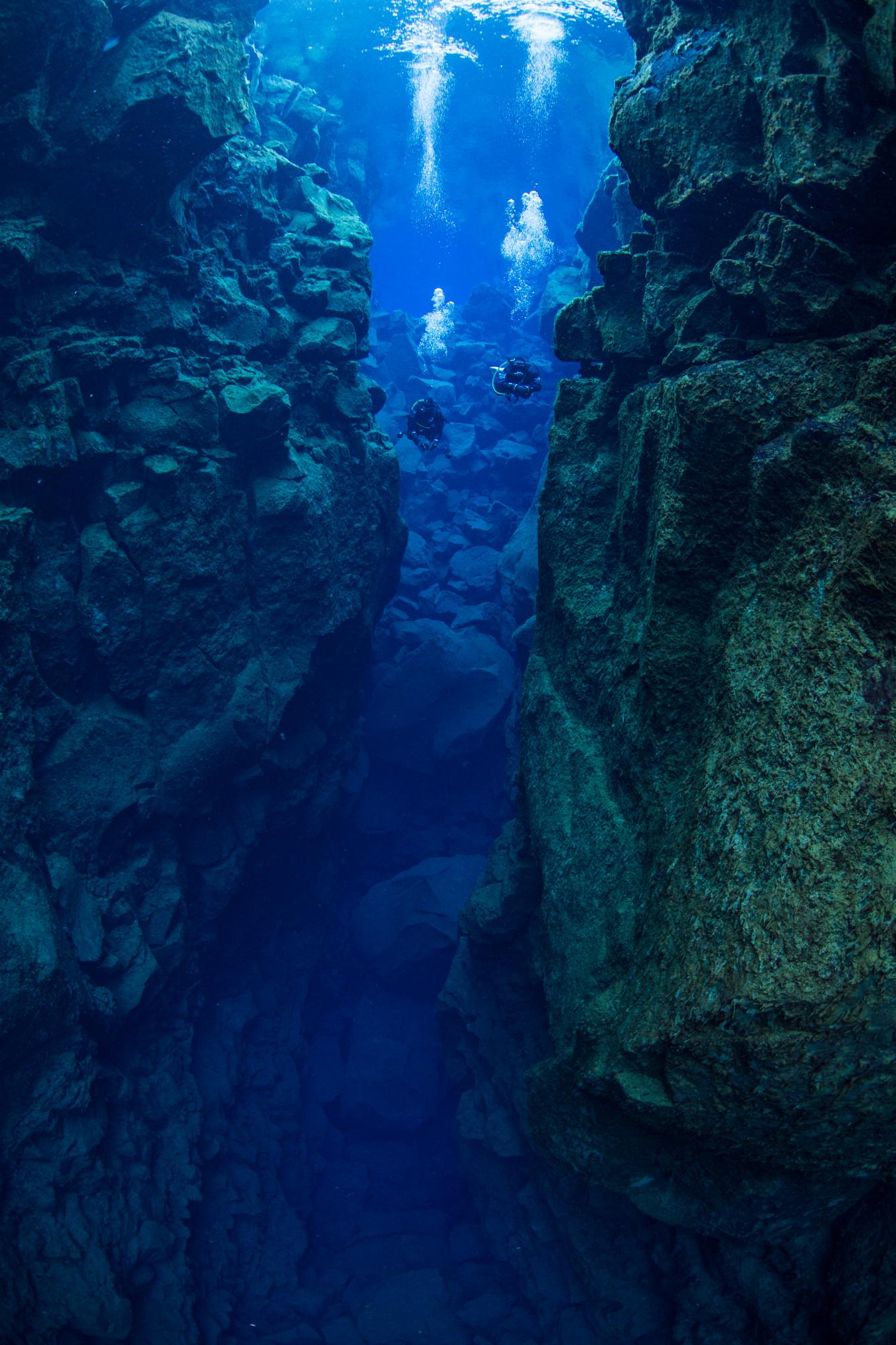 Descending to 2m, our Magmadive guide Byron Conroy led the way, and then myself and buddy Ross Arnold followed. The visibility was simply mind-blowing. Bryon had told us it could exceed 100 metres, but nothing prepares you for just how clear the water really is – in fact, when you were looking at other divers 70-80 metres away, you only knew they were underwater when they exhaled and you saw the bubbles heading to the surface.

Silfra is the name given to a fissure between two continental plates that lies in the Þingvellir National Park in south-western Iceland – although at the point where you can pose for a photograph touching both sides of the rift, you are not, as many claim, breaching the gap between America and Europe. The actual plates lie a kilometre or so apart, and the space between is filled with rubble, and it is in the midst of this vast debris field that Silfra lies. However, that much-imitated pose, arms spread wide between the rock walls, just has to be done – hence the cover shot! 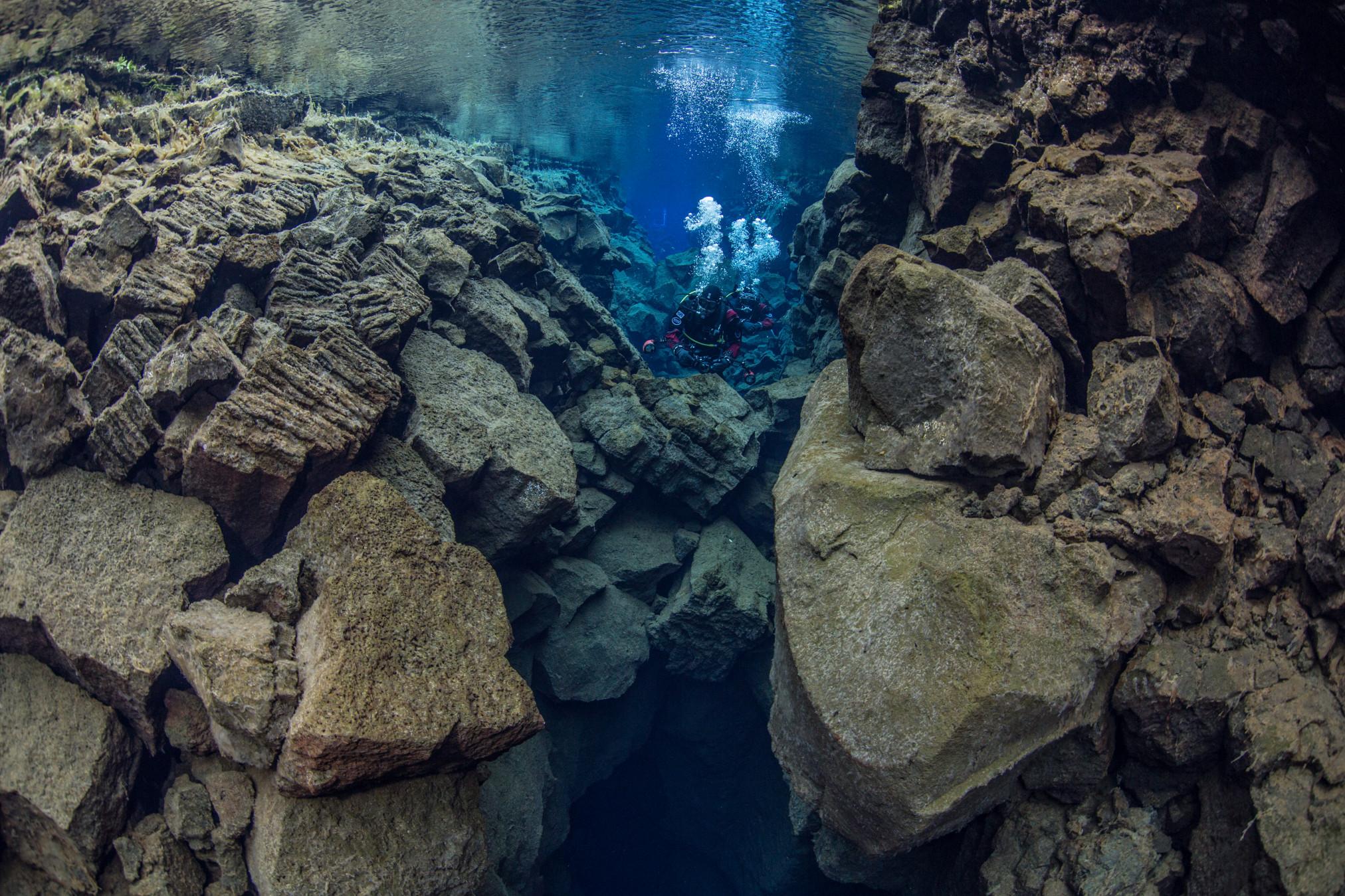 The Silfra dive actually takes you on a meandering journey through various ‘named’ areas – Silfra Cathedral, Silfra Big Crack, Silfra Hall and Silfra Lagoon – and believe me when I tell you that at every turn or corner you are confronted by ever-more-amazing vistas. The ridiculously clear water – after being filtered for hundreds of years, it is like the best mineral water you will ever taste! – reveals every detail of the rock formations, and I would advise you to just take your time and soak up the views. Remember to periodically turn around as well, as quite often some of the best scenes can lie behind you. 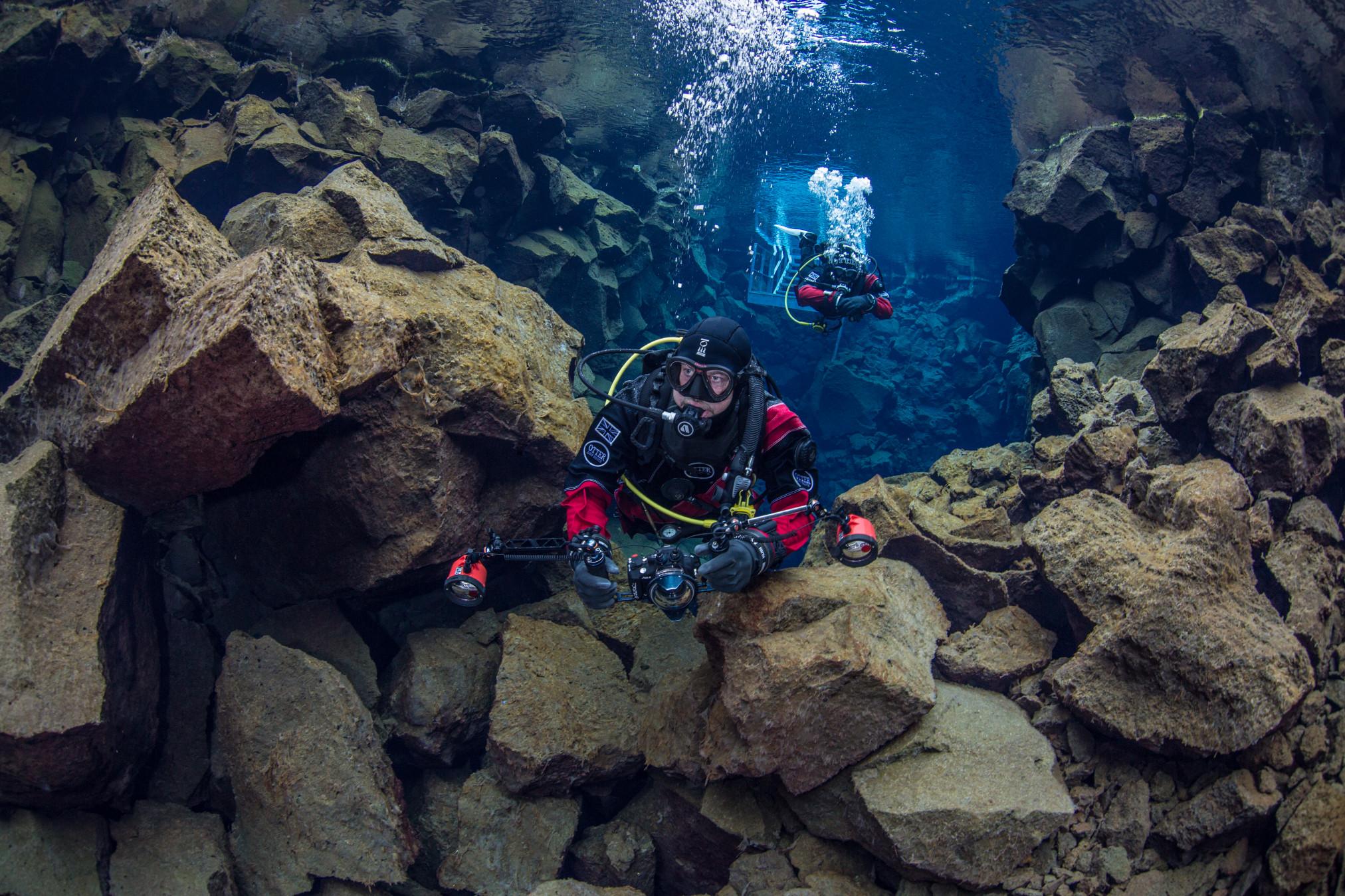 You do not have to go deep to enjoy Silfra – in fact, the optimum maximum depth is probably no more than 10m. You can even sample Silfra snorkelling (albeit in the warmth of a drysuit). The final lagoon section before you exit the water is 3-4m, and it makes a fittingly otherworldly ending to an out-of-this-world experience.

Quite often, I find that dive sites that get massively over-hyped just cannot live up to expectations, but Silfra more than delivered on its promise. This is one of those dives that should be done by every diver, it is just that unique. Even if you are a dedicated warm-water-only diver, get your drysuit cert if only for this single dive – you will not regret it.

Silfra might be what everyone immediately thinks of when you say ‘diving’ and ‘Iceland’, but this country has far more to offer adventurous divers than this one dive site.

Off the north of Iceland, in the Eyjafjordur fjord, lies Strytan, a towering stalagmite rising from some 60m below the surface that dates back a staggering 11,000 years to the Ice Age. The world’s only accessible geothermal chimney, this protected underwater monument comes to within several metres of the surface – normally, they are buried thousands of metres deep. Created by a combination of superheated rock and seawater, this bizarre, almost-menacing structure pumps out an amazing 100 litres of 72 degree freshwater every second, attracting huge shoals of cod and pollock into and around the thermocline it creates. Good buoyancy is a must, not only to avoid plummeting into the depths surrounding the structure, but also to prevent any damage to this unique relic of the past. 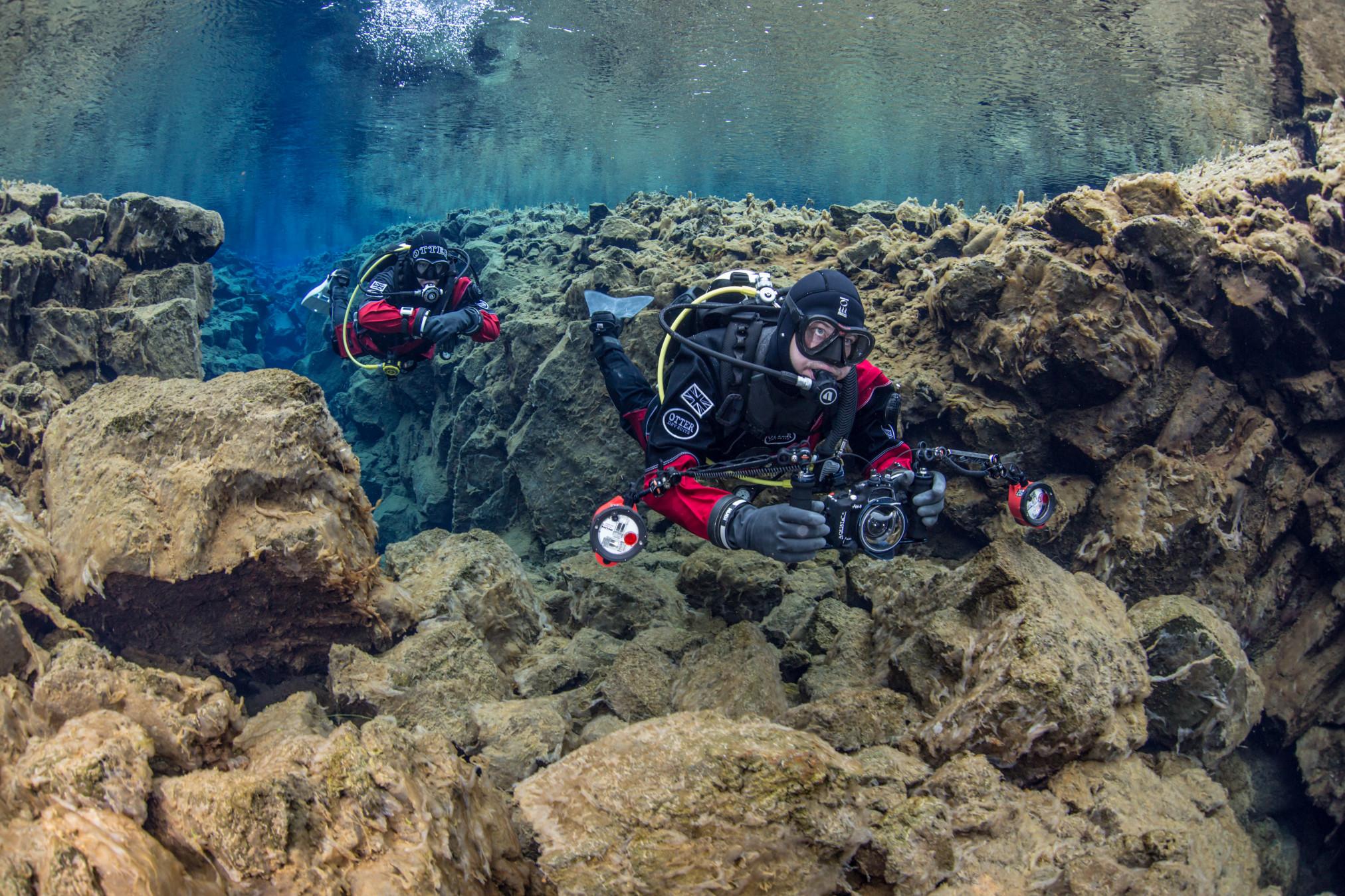 While you are ‘up north’, ensure you visit the small museum run by Erlendur Bogasson, who was the first person to discover Strytan. There are interesting items he has recovered from the seabed and surrounding shoreline, archive images of the chimney itself, plus various other curiosities. Well worth a wander around while you have a warm drink after your dive.

Also up in the north is the Nesgja fissure, which is best described in one respect as a ‘mini-Silfra’. Getting there is amusing – you park up next to the road, kit up near the van and then seemingly wander aimlessly through a field before suddenly the crack appears abruptly in front of you. It is extremely shallow, just a few metres deep, so we opted to just snorkel it, but if you want to haul your dive kit with you, then you are able to dive it as well. 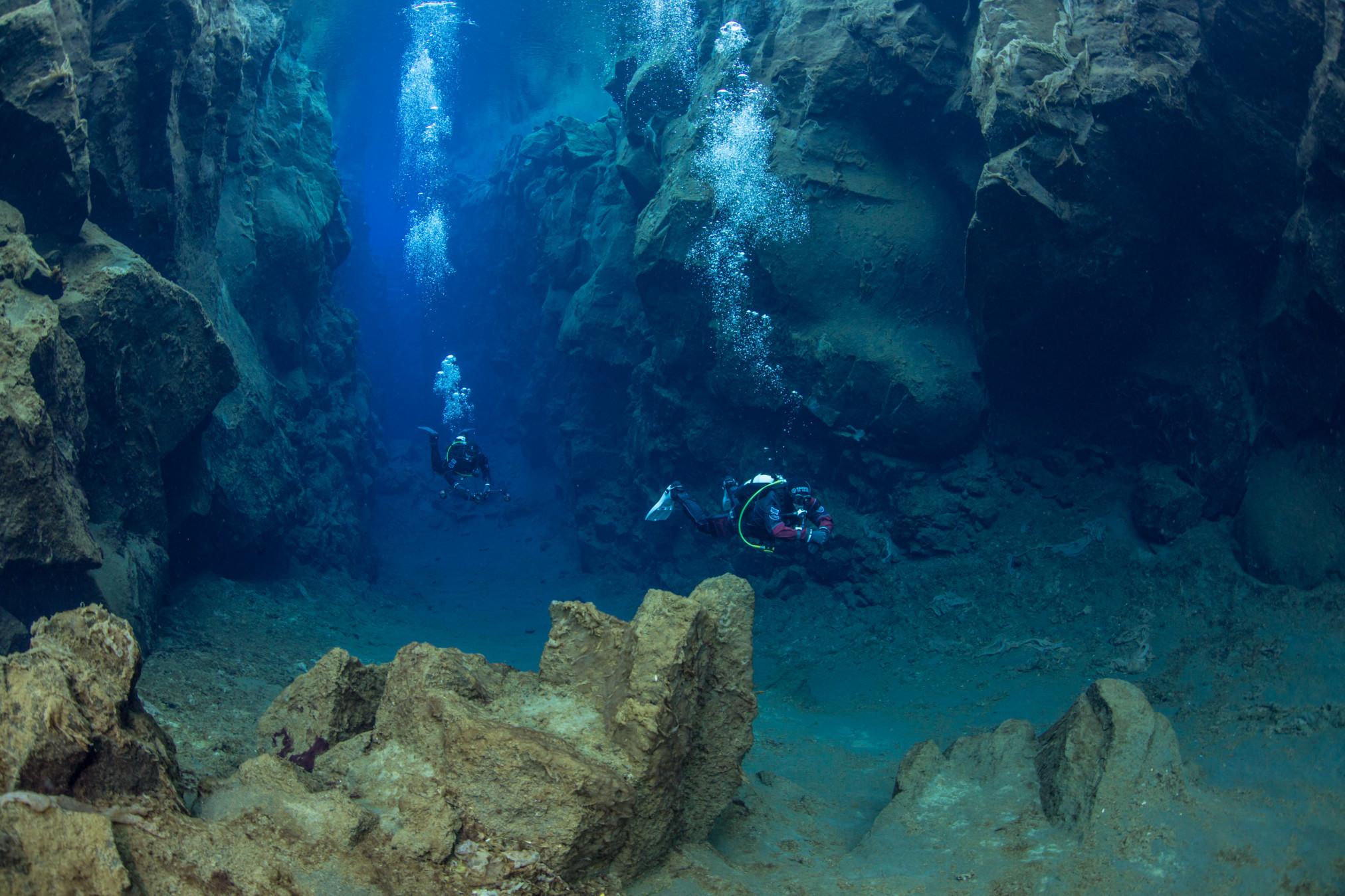 The main crack section is only about 100 metres long, and is characterised by vertical, angular and almost-uniform walls that could have been chiselled by hand. In most areas, the crack is a few metres wide, other places it is barely wide enough for one diver at a time. The awesome vis – it can be more than 100 metres! – combined with the shallow depth makes for some amazing views. The 2 degree C water – which starts out as glacial meltwater from Europe’s largest glacier, Vatmajokull, some 150km south – takes some getting used to, but as in Silfra, stealing a crafty sip now and then delivers the freshest, tastiest water you will have ever sampled! 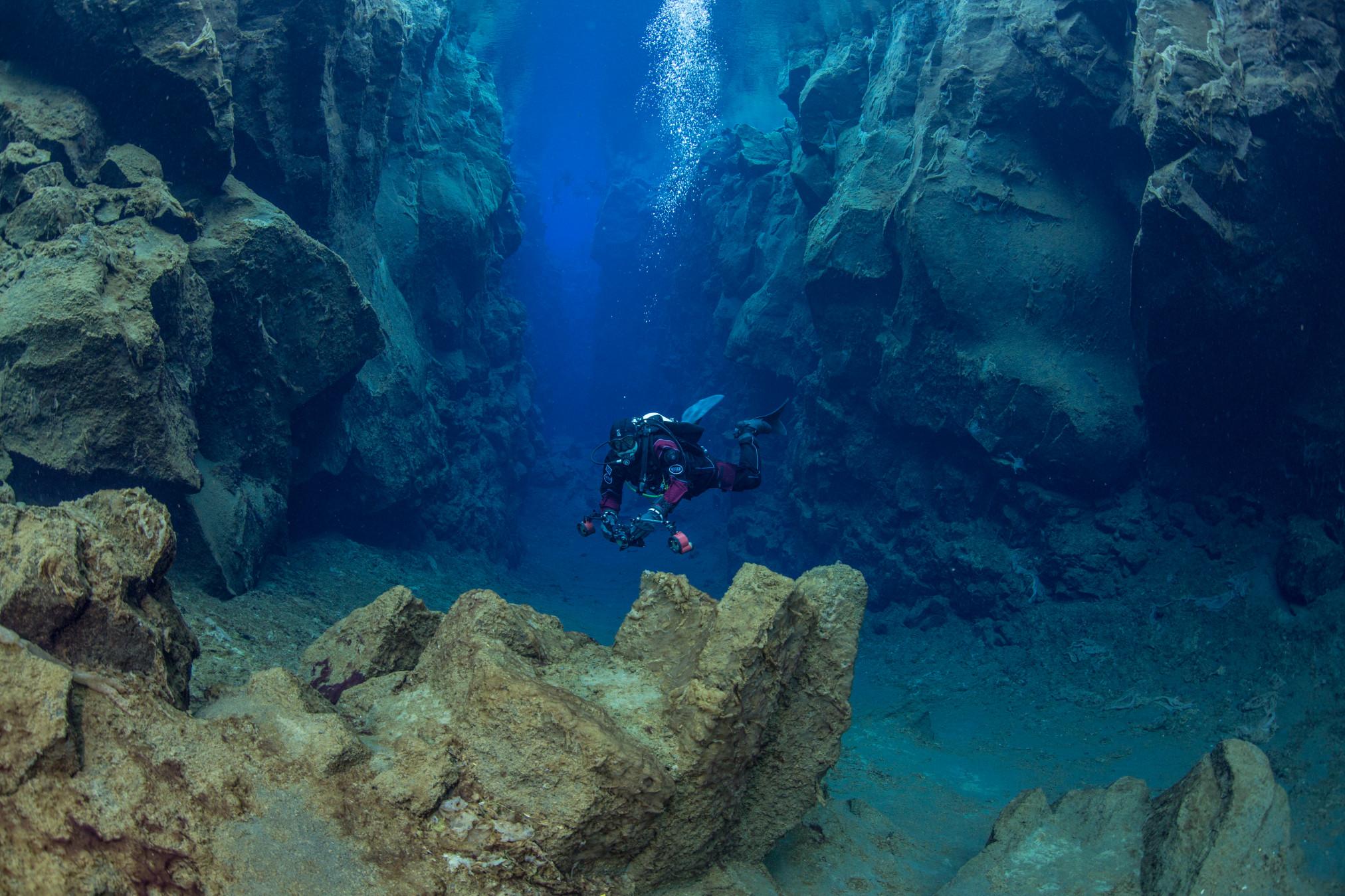 For another unusual site, Bjarnagja – also known as ‘Barney’s Crack’ – is worth checking out. This inland fissure is located near the small town of Grindavik, on the southern part of the Reykjanes Peninsula to the southwest of Reykjavik. There are two old structures remaining, probably from its days as a crab hatchery, and they provide a somewhat eerie backdrop as you kit up to dive and make your giant stride into the water. 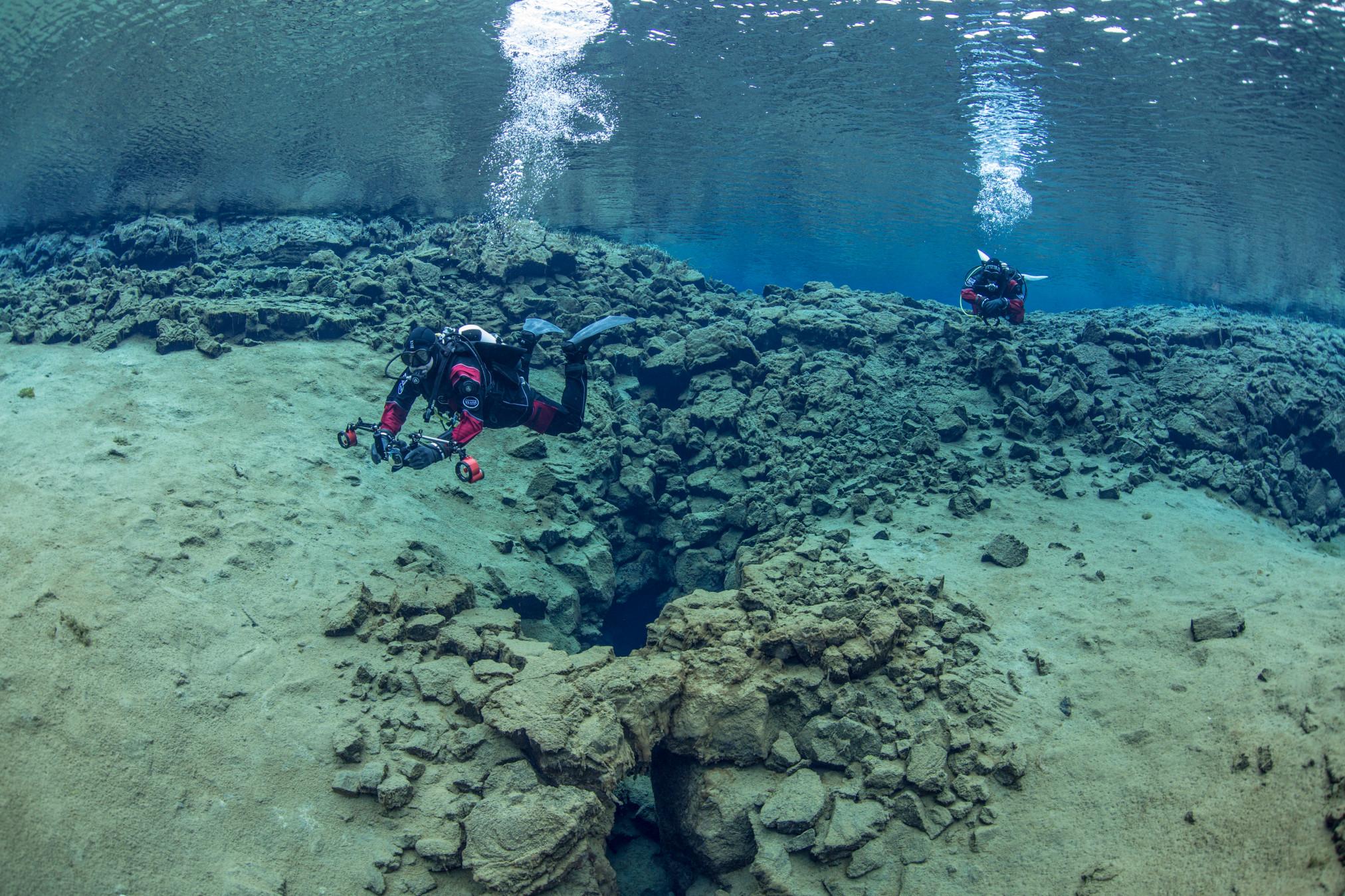 This site is sheltered by volcanic lava rocks, making it diveable in all weather conditions, and it is only some 20m deep, but like Strykan, you need to ensure decent buoyancy to avoid kicking up the dense silt on the bottom. The sheer sides are also covered in a coating of algae, so try to steer clear of them as well. There is a small cavern at one end, but otherwise the main attraction of this unusual dive site is the mix of salt and fresh waters – on the lower section, you are in seawater, and you can encounter flatfish, eels and crabs, as well as find anemones and sponges, but come up several metres through a dense thermocline and you are into insanely clear fresh water.

“The Silfra dive actually takes you on a meandering journey through various ‘named’ areas – Silfra Cathedral, Silfra Big Crack, Silfra Hall and Silfra Lagoon – and believe me when I tell you that at every turn or corner you are confronted by ever-more-amazing vistas”

“Off the north of Iceland, in the Eyjafjordur fjord, lies Strytan, a towering stalagmite rising from some 60m below the surface that dates back a staggering 11,000 years to the Ice Age”

Magmadive was set up to showcase the diving delights around Iceland, and so you can dive with them on day trips, three- and five-day mini-excursions, or full-on ten-day expeditions around the whole of the island.

They run a fleet of 4×4 trucks and mini-vans – including awesome Mega-Trucks with enormous tyres and jacked-up suspension – to deliver you to the rich and varied dive sites of Iceland.

You can bring all your own kit with you, but Magmadive has a truly immense selection of rental equipment, including hundreds of drysuits, if you prefer to travel light.