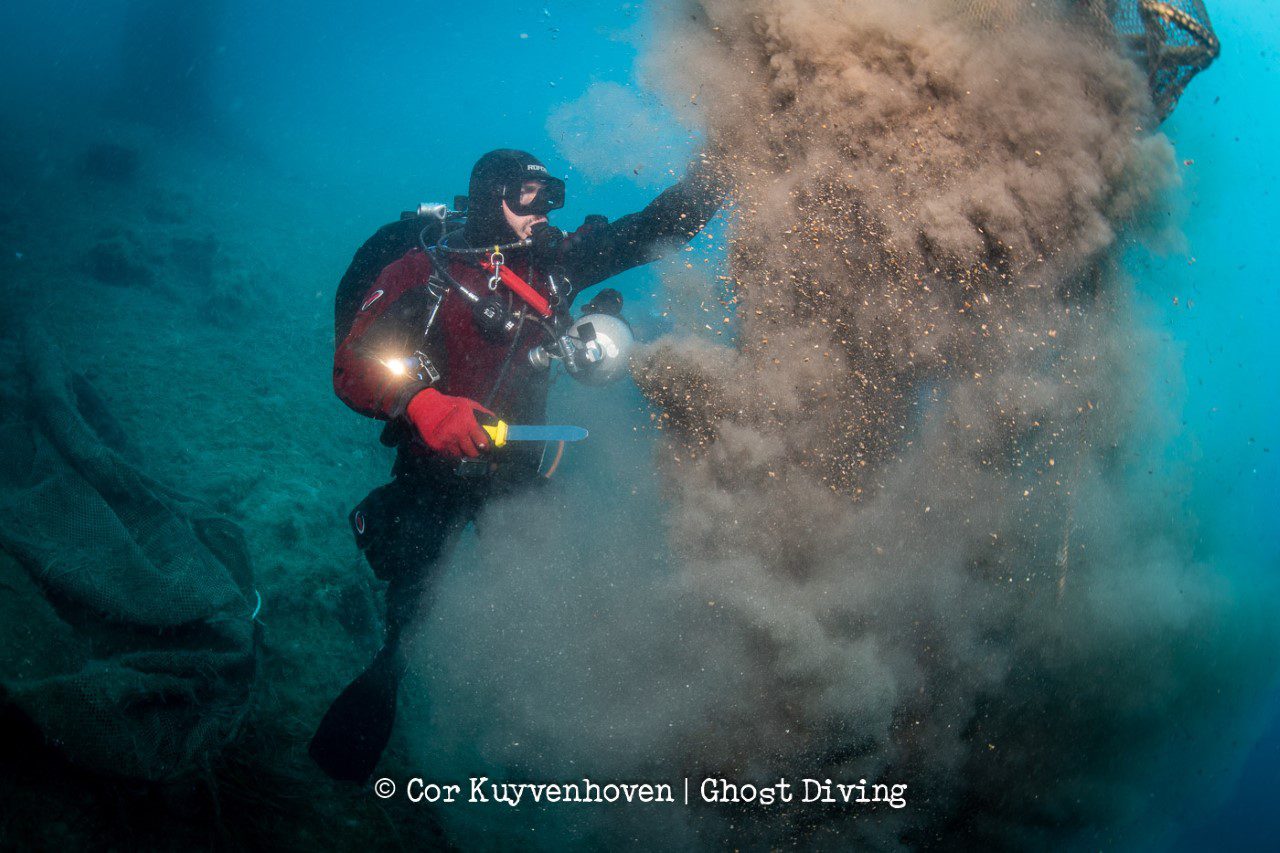 Another massive marine protection effort spearheaded by Healthy Seas and Ghost Diving recently wrapped up on the island of Ithaca in Greece.

Last year, the record-breaking clean-up project by Healthy Seas and partners resulted in 76 tons of marine litter being removed from seas and beaches in eight days. This devastation was the result of a fish farm that was abandoned ten years prior, wreaking havoc to the environment, community and maritime traffic.

It turns out that the same aquaculture was running another facility at another bay on the island, and instead of removing the nets, rings and floats when they ceased operations, the apparatus was sunk to the bottom of the sea. It is estimated that 640,000 tons of fishing gear are lost or abandoned annually in the seas and oceans. It is not clear if the UNEP statistic also accounts for entire ‘ghost farms,’ a sad but true occurrence in Greece.

Veronika Mikos, Healthy Seas director, said: “The main difference of this ghost net clean-up project is that the owner of the abandoned fishing gear we discovered and removed has a name. We have confronted this environmental crime two years in a row, worked toward restoring it, as well as understanding who is responsible and in a position to do something about it. The matter is very complicated. Our goal with this project is to raise awareness about ‘ghost farms’ and to put an end to them.”

With support from Hyundai, Healthy Seas and Ghost Diving together with many partners, organised a clean-up project from March until June with the help of local fishers and volunteer divers focusing on 14 different locations around the island, including the ghost farm but also the harbour of Vathy. In total, about 23,500kg of waste were removed of which, 18,500kg were nets and 5,000kg other types of marine litter, including several hundred metres of gillnets and long lines.

To kick off the “Return to Ithaca”, a public awareness event was organised at the main square which included the screening of a short documentary about the efforts of 2021 and a special photography exhibition which will now move on to the island’s Environmental Education Centre. Education programmes and activities throughout the day were attended by approximately 180 children, meaning to say by almost all children living on the island.

Twenty-five big fish farming nets were removed from the ‘ghost farm’ in the area of Kalavri, in Ithaca. The co-ordinated effort begun with volunteer divers from the Netherlands, UK, Lebanon, Hungary and Greece, cutting and attaching lift bags to the nets. Once at the surface, a barge with crane lifted the nets out of the water and placed them in containers that will be used to transport the nets for recycling. These nets will be regenerated together with other nylon waste into ECONYL yarn, the basis for new products such as socks, swimwear, activewear, carpets and more.

Local environmentalist George Lilas, the man responsible for revealing the environmental destruction, says: “Everyone on Ithaca is grateful to Healthy Seas and Ghost Diving for their efforts to protect our island two years in a row. They were aware of the destruction but didn’t have the means to do something about it besides witnessing their homeland being ruined by unethical, to say the least, business practices.”

Prevention is the only way to stop the ghost fishing phenomenon and halt ocean degradation. To this end, besides the clean-up activities, Healthy Seas and Enaleia with its Mediterranean Clean Up project, have been working together since 2017 to educate fishers in Greece and Italy and collect their waste nets before they end up in a landfill or worse, the natural environment. In the framework of the project in Ithaca, five local fishers were mobilised to limit fishing activity and instead collect plastic from remote locations around the island.