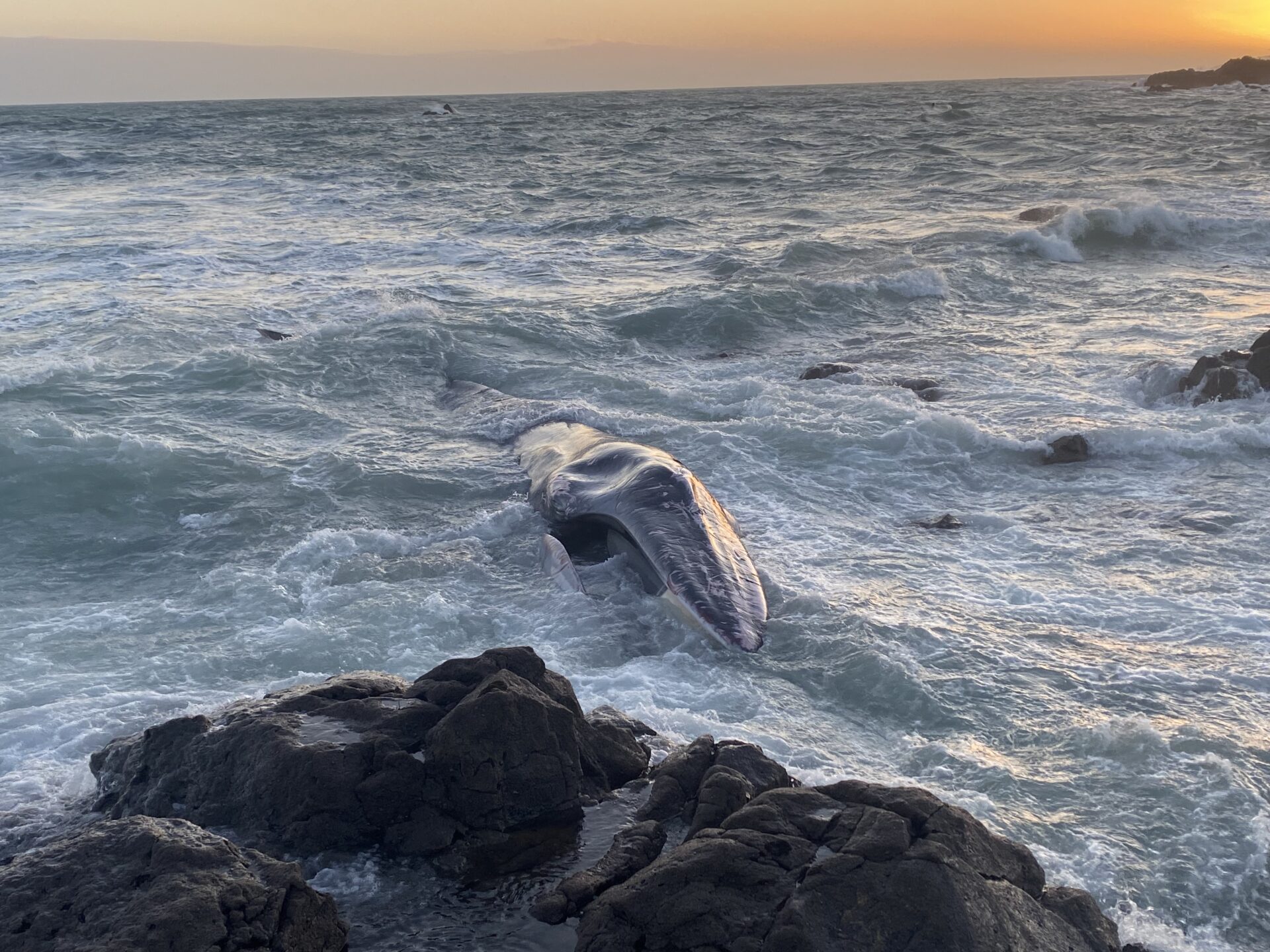 The remains of a fin whale – the second largest animal on Earth – were discovered yesterday (12 January) along Cornwall’s south coast, and marine experts from British Divers Marine Life Rescue (BDMLR) and Cornwall Wildlife Trust are now urging the public to help them find the missing animal after it was swept out to sea overnight.

BDMLR were alerted to the stranded whale yesterday afternoon at 3.20pm after a member of the public reported what was believed to be a live whale ashore near Perranuthnoe Beach. A small team of volunteer Marine Mammal Medics attended the scene, but on arrival the whale was confirmed as deceased.

Dan Jarvis, director at British Divers Marine Life Rescue, said: “The whale was not very easy to spot, being some distance along the coast on a headland and mostly still submerged. Only its head was really noticeable having been forced up on to the rocks by the rough sea, while the rest of its body was very much in motion with the tide and waves.

“Unfortunately when we arrived it became apparent the 12- to 15-metre-long animal was already deceased. It was far too dangerous to get close, so our team stayed back a safe distance to assess it visually, collect photos and feed back information to our colleagues at Cornwall Wildlife Trust and Falmouth Coastguard.”

Though difficult to confirm initially, the animal was later identified by BDMLR volunteers as a female fin whale. The individual was said to be in poor nutritional condition, but a cause of death could not be determined without a postmortem examination.

A volunteer from Cornwall Wildlife Trust’s Marine Strandings Network – Cornwall’s licensed recorder of all dead marine wildlife – also attended the scene. The whale was assessed for a potential in-situ postmortem examination for the following day by the Cornwall Marine Pathology Team. However, when volunteers returned to look for the whale this morning (13 January), it was nowhere to be seen.

Abby Crosby, marine conservation officer at Cornwall Wildlife Trust, said: “To see the body of this majestic mammal onshore is extremely upsetting and sad. But, if the animal is found again, it provides a fantastic opportunity for us to examine the individual and collect scientifically robust evidence that will help us conserve our marine megafauna for the future.

“At Cornwall Wildlife Trust, we’re celebrating 20 years of running the Marine Strandings Network this year. It’s safe to say we would know far less about the state of our Cornish seas and the threats to our vulnerable marine life if it wasn’t for our dedicated strandings volunteers, reports from members of the public and the partner organisations we work so closely with.

“If you come across the whale, or indeed any dead marine animal on our coastline, please ring our hotline straight away.”

The fin whale – also known as ‘the greyhounds of the sea’ – can grow up to 24 metres in length and weigh up to 120 tonnes. They can be found all over the world’s oceans but were heavily hunted during the 19th and 20th centuries. The fin whale is currently classed as a vulnerable species, according to the IUCN Red List of Threatened Species.

The wildlife charities are now asking anyone who might find the missing whale to report it immediately. Members of the public are urged to report all dead animals found along Cornwall’s coastline to the Trust’s 24-hour strandings hotline on 0345 2012626.

All live stranded animals in need of rescue can be reported to BDMLR’s rescue hotline on 01825 765526.