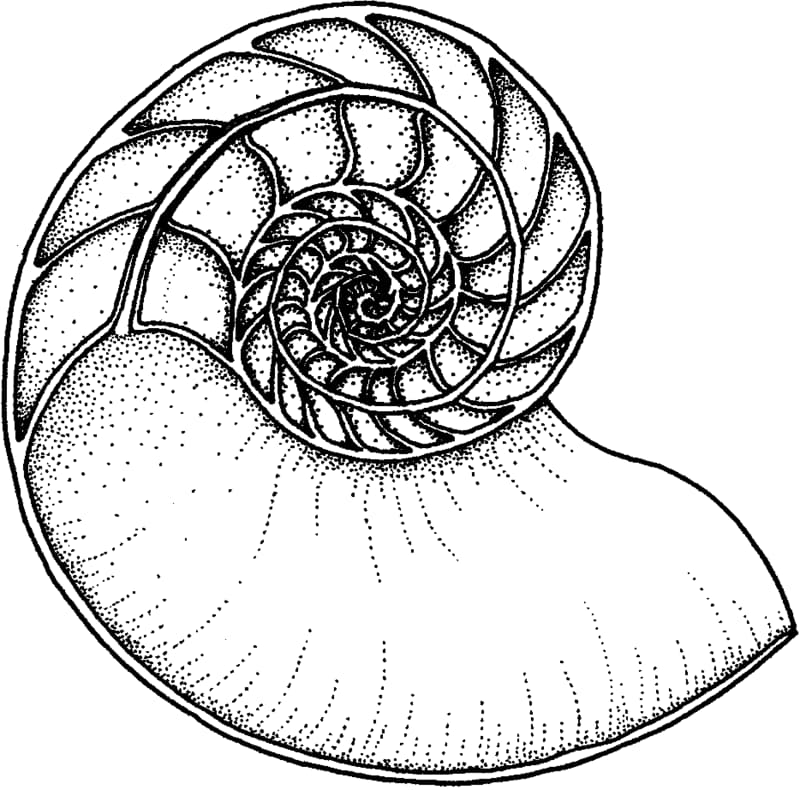 The Nautilus is a cephalopod and a nearby relative of octopuses and squids, read on for more Fascinating Nautilus Facts.

This creature can be found in the tropical waters of Indian and Pacific seas, close to the coral reefs, near depth areas of 300 to 600 meters. Nautilus are (like most marine species these days) affected by overfishing and by the fact that their beautiful shells are sold as ornaments.

On average Nautilus measure 20 to 25cm. Its shell is white to orange with brown zebra stripes. The inner side of the shell is pearly white.

The Nautilus' shell is made of isolated chambers, Nautilus are born with four chambers and build new chambers through time. Grown-up Nautilus have more than 30 chambers. The creature (looking like a little octopus) lives in the newest chamber, which is also the biggest. The other chambers are filled with air and water to control buoyancy. A tube called the siphuncle goes through each chamber and is used to pass liquid and gas from one chamber to the other. The gas is initially diluted in liquid in one chamber and bubbles out when released in a second low-pressure chamber, just like opening a can of soda.

By blowing out water through a siphon. Position of the siphon decides the direction of the Nautilus: front, back, upward or descending.

They are situated outside the shell to catch and manipulate their prey.

Nautilus have a beak.

This is used to cut their food which includes crabs, shrimps and fish, just like other members of the octopus family.

However, their smell is overdeveloped and used for hunting their preys.

They spend their day at depths and move toward the shallow water to hunt when the sun goes down.

Nautilus mate only once a year.

75% of Nautilus caught to be studied are male, and only 25% are females. Researchers don't know why.

They have been living on planet earth for the last 500 million years with no adjustments in their appearance. Nautiluses occupied the Earth 265 million years before dinosaurs showed up.

Nautilus has a long life expectancy.

They can survive over 15 years in nature.

The reason I wrote this blog post is that we recently came across this little fellow while diving Myanmar! After some research, we found out that this weird creature is called paper nautilus or argonauts. We encountered a female Argonaut as male are ten times smaller (rarely passing the size of 2cm), and don't have a shell. Little is known about these creatures, but I found these few facts interesting enough to share!

One of the male's arm serves as a penis and is snapped off his body during sex to inseminate the female. The arms then remain inside the female body.

The female then secretes the papery shell with the tips of two tentacles. She lays her eggs inside the paper shell before using it as a house for herself.

But the really cool fact about argonauts is their BCD (buoyancy control device). They are the only creature known to trap air bubble from the surface.

They swim to the surface, suck in some air from small vents on the top of their (non-compartmented) shells, close the holes with a tentacle before turning upside down and pushing themselves below the surface where they reach neutral buoyancy. Allowing them to then swim effortlessly.

Camille Fogarolo is one of the owners of The Smiling Seahorse. Camille and her husband Franck Fogarolo are the experts when it comes to diving Myanmar. They have been diving its waters since 2012. Their new liveaboard, launched in November of 2018, can take up to 16 divers to the most unexplored dive sites of South East Asia. The owner, Franck Fogarolo and its team are known for excellent customer service, unmatched cuisine and a fun atmosphere.