Diving the Wreck of the Ex HMAS Brisbane 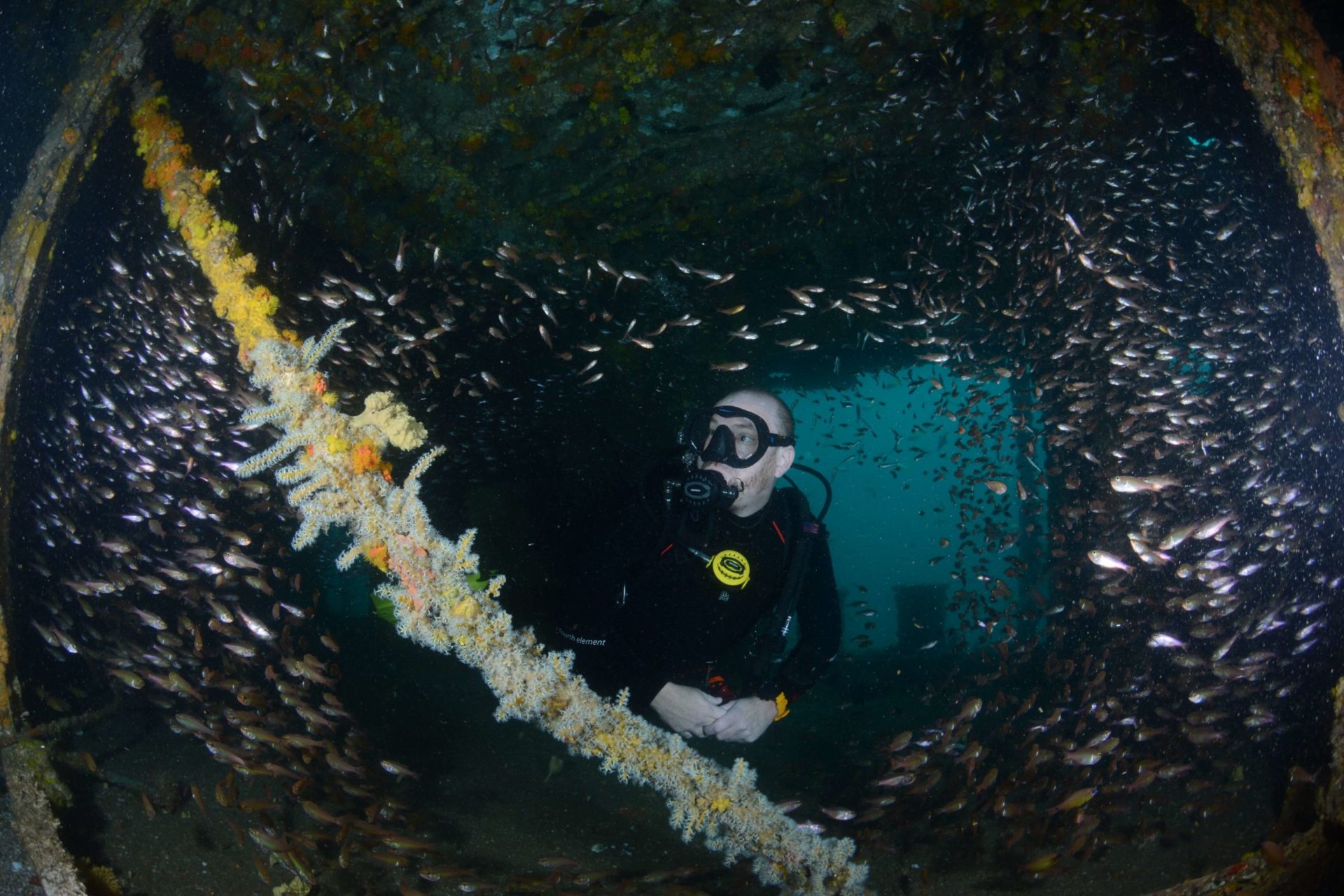 The Ex-HMAS Brisbane is a decommissioned guided-missile destroyer, scuttled in 2005 about three nautical miles off the sunshine coast. In its relatively short life underwater it has become a thriving reef and a mecca for marine life.

As experienced divers who have completed numerous dives on this fantastic wreck, we were given the option of joining a guided group or exploring the wreck in our buddy team. We choose the latter. As a photographer I am often conscious of holding a group up or, of getting separated from the other divers while I take photos.  To have the opportunity to explore the wreck at my leisure is a real plus, it means that I only have to worry about annoying my buddy when I dwell in a certain area. The other benefit is less silt is kicked up and there are fewer inadvertent photo bombers in the frame.

While the guided groups explored the exterior of the wreck, we descended directly down the forward stack to the boiler room in the bowel of the ship. From there we swam through to the engine room then up to the gally. This is one of my favourite areas as it is teaming with glass fish and cave sweepers. Lionfish and scorpion fish loiter with intent. After spending some time in the ship’s interior, we made our way back to the forward stack for our safety stop which is conveniently at a depth of 5 meters.

For our second dive we swam down one of the external corridors to the stern of the vessel. A large school of snapper were hanging out around the rudders, and we had a close encounter with a large free swimming feather tail sting ray. Entering the wreck at the stern we made our way back through the interior along coral encrusted corridors and various rooms fill with yet more glass fish.

We then spent a considerable amount of time in one of my other favourite places on the wreck, the missile control room. This room is packed with glass fish and bright orange cup coral cling to the roof. The safety stop was once again spent of the forward stack which is always covered by a large school of silver bat fish.

I have now had the pleasure of diving the Ex HMAS-Brisbane on numerous occasions and each time brings a different experience. There is always plenty of marine life in, on and around the wreck and still plenty of places to explore.

The Ex-HMAS Brisbane is located just off the coast at Mooloolaba on the Sunshine Coast, about 1.15H drive from Brisbane Airport.

Scuba World is conveniently located on one of the canals in the area so you can kit up at the dive centre and then just walk onto the boat. The dive centre is well laid out, clean and modern. It is clear that a lot of thought went it to its design and a lot of pride is taken in its appearance. The boat is fast and comfortable, and the crew were professional, friendly, knowledgeable, and very helpful.