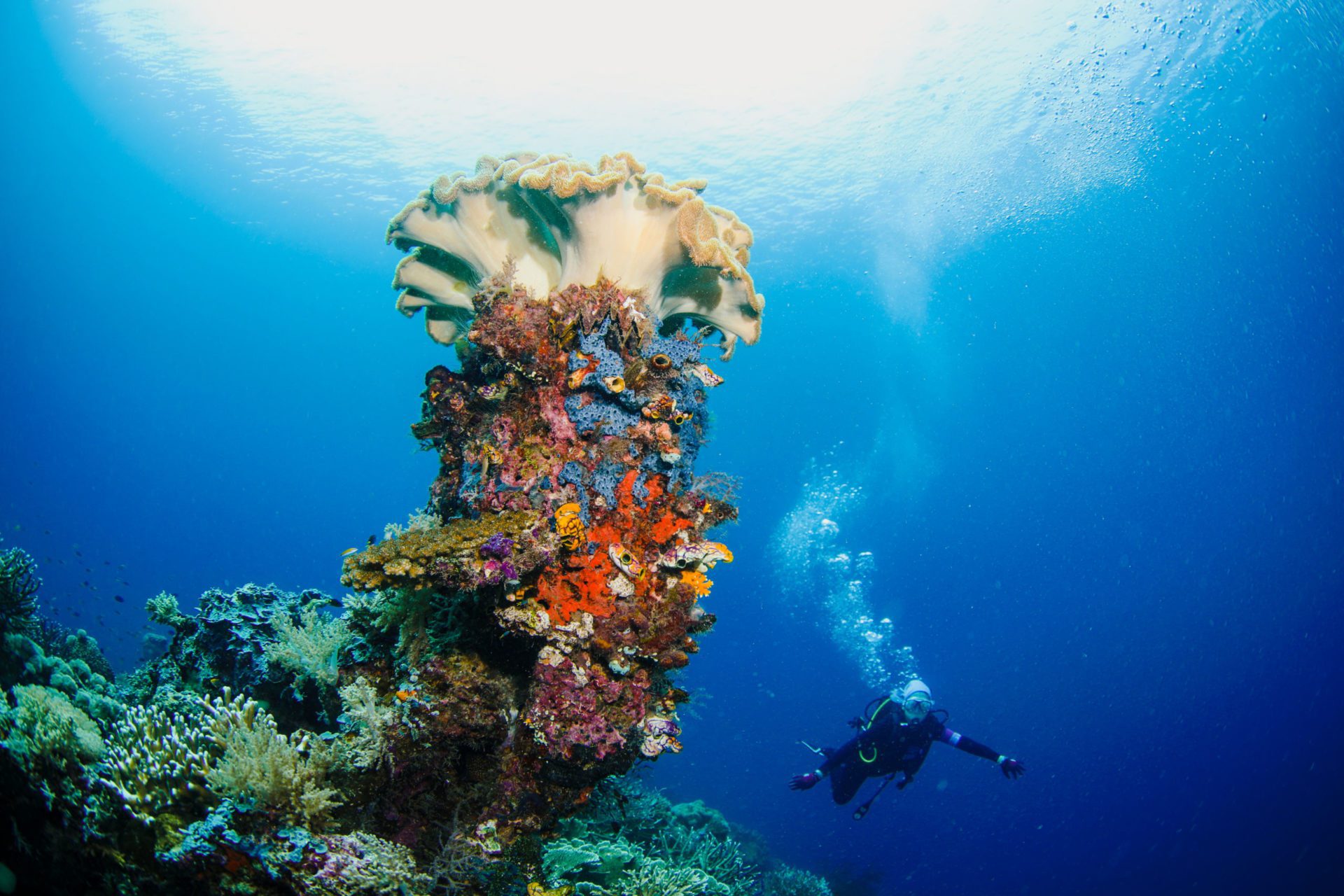 Living in Queensland, I am spoiled for choice when it comes to diving destinations. A stone's throw from Brisbane there are two fantastic dive sites that I have been itching to visit for a long time now. The Ex-HMAS Brisbane and Wolf Rock. My mini road trip started with the Ex-HMAS Brisbane.

The Ex – HMAS Brisbane was a guided-missile destroyer that was launched in 1966 and commissioned by the Australian navy a year later. The Brisbane was deployed twice to the Vietnam war and once to the Gulf war. Eventually, it was decommissioned in 2001. After some deliberations about its fate, it was finally decided that scuttling this 133-meter-long vessel to make an article reef would be the best course of action.

The bridge and one of the gun turrets were removed and sent to the Australian War Memorial in Canberra. Then, in 2005 the Brisbane was sunk 3km off the Sunshine Coast. The ship was filled with 250 tons of concrete and scuttled using 38 charges. The former warship now sits upright in 27 meters of water, with the smokestacks a mere 3 meters beneath the surface.

A conservation park has been established around the wreck to protect the vessel and the marine life that is drawn here. This status means that the area is a marine life no-take zone and that it is forbidden to remove artifacts from the site. Permits to dive the wreck have only been granted to two Dive operators, Scuba World and Sunreef Mooloolaba, so the wreck is never overcrowded. The mornings are sensibly placed and well maintained by the respective operators meaning there is no need to drop anchor or tie onto the vessel, which can cause damage to the wreck and the environment.

I have actually dived this wreck before, about eight years ago. Even back then, I was impressed with the coral growth and marine life that inhabited this enormous structure. What also struck me was the thought that had gone into sinking the ex-navy ship. The vessel had not just been cleaned and sunk. Large holes had been cut at strategic intervals along the length of the hull and on the deck to allow easy access. For photographers, there was the added benefit of allowing more light into the usually dark and gloomy interior, with all internal areas offering three points of natural light.

Further fuelling my desire to revisit the Ex-HMAS Brisbane were the reports that while we were all in lockdown the marine life was having a huge party on wreck. Like a bunch of teenagers that had been left alone by their parents for the weekend. Plus, I had also received a call from Mike, the owner of Scuba World, saying that the conditions were fantastic and that he would personally guide us around the wreck.

The visibility had dropped slightly compared with the previous day, but we were still greeted with an excellent 20 plus meters. Our first dive started at the forward gun turret, the once smooth barrel now nobly with encrusting corals and sponges. From here, we made our way to the stern along the port side walkways where bannerfish, sargent majors, angelfish, and wrasse nibbled away tirelessly on the railings, deck, ceilings and bulkhead.

The exterior of the wreck also offered plenty of opportunities for critter hunting, and we encountered various nudibranchs, leaf scorpionfish, tiny shrimp and octopi, to name but a few. Just off the wreck, a commotion caught our eye, and upon further investigation, we encountered an immense bait ball being harried by jewfish, kingfish, snapper and trevallies. The multitude of fish species that congregated around the outside of the wreck was just incredible.

The first dive is usually spent navigating around the outside of the vessel, an orientation dive to apricate the ship's sheer scale and investigate points of interest like the gun turrets, bow, stern, and superstructure. However, on Mike's suggestion, we made our way back to the mooring line through the ship's interior. Mike reasoned that firstly, no one else would be inside the wreck, so it would be better for taking photos and secondly, the interior is stunning at the moment and packed with fish. Mike was right on both counts but in particular, the second.

It is no exaggeration to say that every room we went into was a heaving mass of fish. This is definitely where the party was still in full swing. Immense schools of glassfish swayed back and forth, jostled by huge schools of juveniles from numerous different species, including barracuda and barramundi. Cave sweepers were hanging around the peripheries. Menacing looking Loin fish and groupers dwelled in the glooming corners waiting for an errant glassfish to break ranks.

This curtain of fish would part as we swam through, the void quickly getting filled on our departure. We ventured from one room to the next via walkways plastered in coral, and in each room, it was the same story. In what looked like the missile control room bright orange jewel anemones added a splash of colour to the walls and ceiling.

In another room, a particularly vivid patch of broccoli coral was overzealously guarded by an aggravated and quite frankly aggravating damsels. This diminutive creature had no fears about repeatedly pecking me on the head as I tried to get a good shot of his home, clearly not a big fan of the paparazzi. Eventually, we made it to the mess hall, where we exited the boat and made our way up the superstructure to the smokestacks. Here we completed our safety stop surrounded by glittering silver batfish.

The entirety of the second dive was spent investigating the Brisbane's inner chambers, which suited me just fine. Our entry point was through one of the two smokestacks. It seemed counterintuitive to be making our way down this vertical tunnel into the depth of the ship. But I have to admit this was one of my favourite aspects of the dive, especially as we exited into the boiler room that was, surprise surprise, full of glassfish.

From here, we ventured into the engine room, and then slowly, we snaked our way through the well-lit interior of the Brisbane until the conclusion of our dive back at the smokestack. Along the way were the ever-present glassfish, vivid corals and a whole host of interesting marine life from all links in the food chain.

The Ex-HMAS Brisbane is a sublime dive site. The wreck is easy and fun to navigate through, the interior is teeming with life, and the exterior attracts a huge variety of marine life from sharks and rays to turtles to giant schools of fish. The wreck is covered in coral both inside and out and is home to plenty of little critters. This wreck will only get better with age, and I am definitely not going to leave it so long before my next visit. Its reputation as one of Australia's best wreck dives is well deserved, definitely one to put on the to-dive list for 2021.

The diving on the Ex-HMAS Brisbane is year-round, and while the summer months offer warmer water, the conditions can be a bit more hit and miss. The winter months generally provide better visibility and have the added bonus of the whale migration from April to November.

How to get there

The closest major airport is Brisbane international, which is about an hour's drive from Mooloolaba.

Scuba World is conveniently located just off the motorway in Mooloolaba. The dive centre has a great layout, is clean and well maintained. It has its own pool and is excellent for conducting courses. Its location on one of the canals that criss-cross the region offers easy access to the Ex-HMAS Brisbane and local dive sites. The staff are friendly, experienced, professional and always keen to help. www.scubaworld.com.au Tel: 07 5444 8595