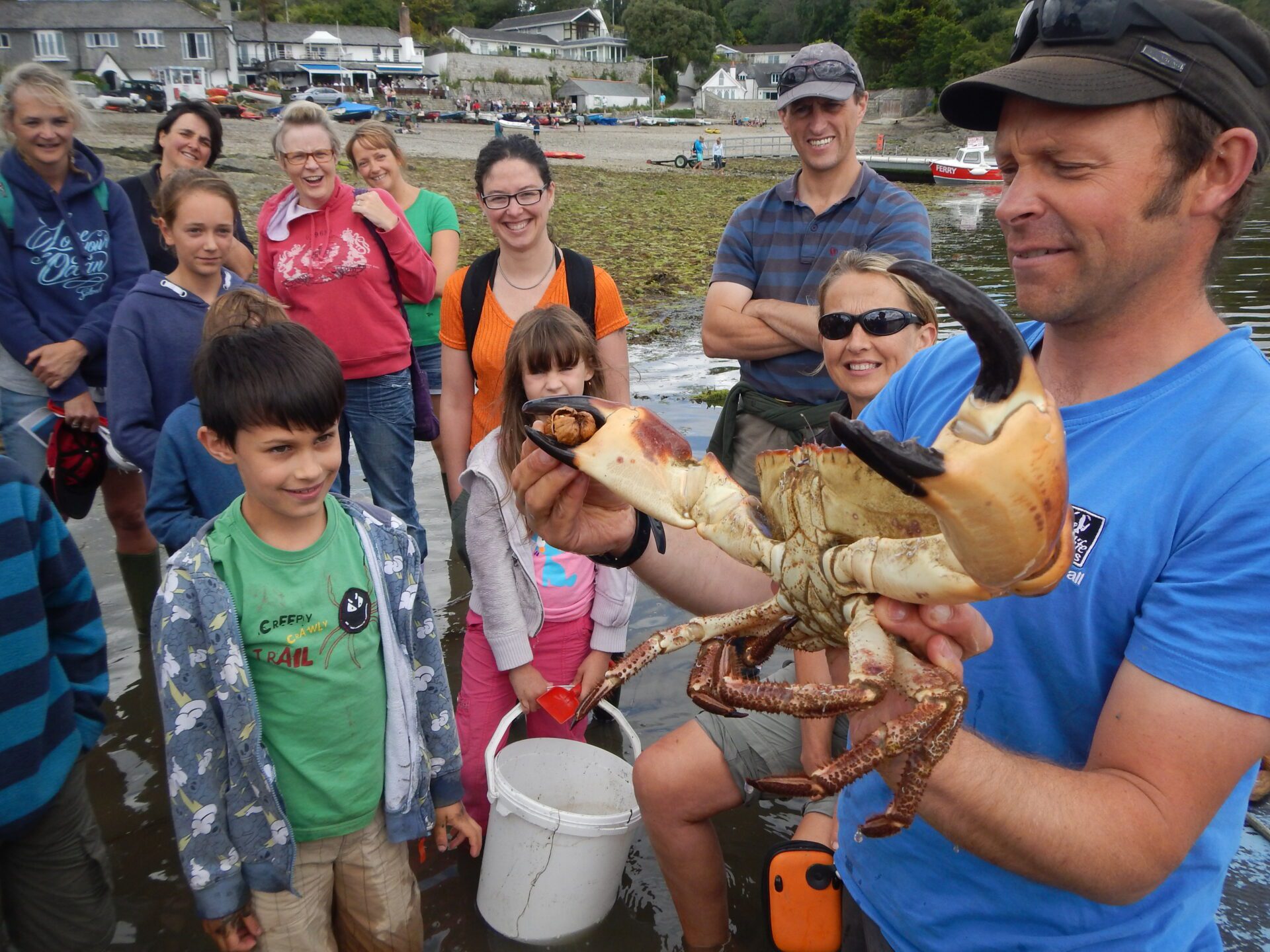 Two marine conservationists from Cornwall have been recognised for their achievements in a national awards ceremony.

Matt Slater, a marine conservation officer for Cornwall Wildlife Trust, was announced as the winner of the 2022 National Biodiversity Network (NBN) Award for marine wildlife recording. Kate Williams, a volunteer for one of Cornwall Wildlife Trust’s marine projects, was also named as runner-up in the same category.

Both were presented with their prizes at the Natural History Museum in London on Wednesday 9 November, following the culmination of the annual NBN Conference.

Matt, who began working at Cornwall Wildlife Trust in 2012, is the Seasearch co-ordinator for Cornwall and the Isles of Scilly. The nationwide project, led by the Marine Conservation Society, was set up to train recreational divers and snorkellers to record the marine life and habitats they encounter.

To date, Matt has overseen the collection of over 30,000 records – all of which are submitted to the Environmental Records Centre for Cornwall and the Isles of Scilly (ERCCIS). Matt is also an active recorder, personally contributing over 5,000 Seasearch records over eight years.

In 2019, he pioneered the national #HandsOffOurCrawfish campaign on behalf of Cornwall Wildlife Trust, which calls on divers to pledge not to catch crawfish – also known as the European spiny lobster – following their dramatic comeback after being overfished in the 1960s and 1970s.

In addition to Seasearch, Matt also runs Shoresearch Cornwall, which has carried out hundreds of rockpool surveys and has trained over 200 volunteers in its ten-year history, as well as the Cornwall Good Seafood Guide.

Reflecting on his achievements, Matt said: “I have been fascinated with marine life all my life and recording is something that comes naturally. I love how every dive, snorkel or rockpooling session still yields animals and seaweeds that I haven’t seen before, despite having been doing this for so many years!

“I was completely shocked when I heard the news! I must thank the many people I’ve worked with along the way – volunteers, colleagues, funders and partners who have made a huge difference in helping us to monitor changes in our seas and fight for better protections.”

The national NBN Awards recognise and celebrate the outstanding contributions adults and young people are making to wildlife recording and data sharing, which is helping to improve understanding of the UK’s biodiversity.

Data from Cornwall’s wildlife recorders are considered particularly valuable for climate change research, since the area is that which is often first encountered by species moving North from warmer waters.

Since the charity’s formation in 1962, skilled volunteers have helped Cornwall Wildlife Trust to monitor and increase its knowledge of local marine life. Records from volunteers have been used to influence policy and legislation, such as the designation of Marine Conservation Zones in Cornish waters.

Kate Williams, who lives in Illogan, was named as runner-up in the NBN Award’s marine category for her volunteering efforts with Cornwall Wildlife Trust. She was honoured for her outstanding contribution to Seaquest Southwest – a land-based citizen science project which supports over 150 trained volunteers to record marine megafauna, such as dolphins and whales, around the county.

Since 2013, Kate has carried out over 400 surveys for the project, equating to 829 hours of effort and over 50% of the records in the project’s database.

Kate’s records of a rare, inshore pod of bottlenose dolphins have enabled Cornwall Wildlife Trust to build up a picture of their population status and key breeding and feeding sites in the South West. As a dedicated recorder, Kate is also a key volunteer and Photo ID Co-ordinator with the Seal Research Trust, monitoring regional grey seal movements.

Kate said: “The Seaquest Southwest project gives me the opportunity to share my love of wildlife with people of all ages which is great fun. Everyone always wants to talk about the first time they saw dolphins!

“Collecting data on our wildlife is the only way we will be able to understand, conserve and protect it.”

Lisa Chilton, Chief Executive Officer of the NBN Trust, said: “Well-deserved congratulations to both Matt Slater and Kate Williams, the winner and the runner-up of the 2022 NBN Award for Wildlife Recording – Marine.

“As Seasearch coordinator for Cornwall for over eight years, Matt has overseen the collection of over 30,000 marine records that have made their way to our data portal, the NBN Atlas. With his boundless enthusiasm, he has established successful initiatives for recording all marine species, and especially crawfish – a species of particular concern in Cornwall.

“Kate, who has been volunteering for nine years with Seaquest Southwest, has carried out over 400 land-based surveys of seals, dolphins, sharks and whales at 35 different sites around Cornwall, generating over half the wildlife records in the project's database!

“They have both made a huge contribution to our knowledge of UK marine species and we are delighted to be recognising their exceptional work with these Awards.”

Cornwall Wildlife Trust hosts the Environmental Records Centre for Cornwall and the Isles of Scilly (ERCCIS) – the central resource for all species and habitat information in the county which currently holds over 7 million records.

The well-loved wildlife charity wants to encourage more people to take action for nature by submitting their wildlife sightings to ERCCIS and by getting involved in one of its citizen-science projects.