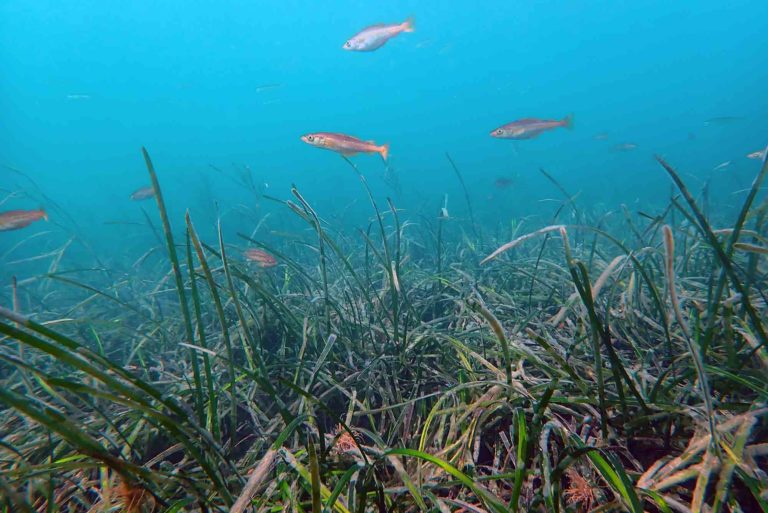 The launch of a new project to restore Cornwall’s carbon-capturing seagrass meadows has been announced. Funded by clothing brand Seasalt Cornwall and implemented by Cornwall Wildlife Trust, the ‘Seeding Change Together’ project aims to restore intertidal seagrass found in the Fal Estuary.

Seagrass plays a critical role in absorbing and storing the world’s coastal blue carbon. Using technology never previously trialled in Cornwall before, marine experts will identify and test restoration methods that can be scaled up in the fight against climate change.

The three-year project, based at Cornwall Wildlife Trust’s Fal Ruan nature reserve, will begin with an important research and development phase. The Trust will conduct on-site and aerial surveys, as well as water quality tests, to better understand the environmental conditions affecting the seagrass beds. Thousands of seeds will then be collected and planted by volunteers.

Cornwall Wildlife Trust hopes its conservation efforts will expand the size of the reserve’s seagrass bed. Learnings from the project could also identify additional locations for seagrass restoration in the River Fal.

Matt Slater, Marine Conservation Officer at Cornwall Wildlife Trust, said: “Many people don’t realise we have seagrass in our UK waters and, sadly, it doesn’t get the recognition it deserves. But these underwater meadows are sometimes called the ‘lungs of the sea’ because of their incredible ability to store massive amounts of carbon.

“We want to see seagrass habitats in Cornwall restored towards their historical levels and for seagrass to be present in all locations that could support it. This partnership with Seasalt will allow us to make headway towards that goal. The first phase of the project involves studying this wonder-plant and understanding the conditions that it needs to thrive. We can’t wait to share the results with you in the future.”

As the world’s only flowering plant capable of living in seawater, seagrass provides an impressive number of environmental services – giving a home to hundreds of marine species, supporting fisheries and protecting shorelines from erosion.

It also acts as a powerful nature-based climate solution; despite covering less than 1% of the ocean floor, seagrass beds are responsible for 15% of its total carbon capture.

Unfortunately, this natural wonder has suffered significant declines in recent history. The UK has lost up to 92% of its seagrass meadows in the last 100 years – which is why this project is so needed.

Adam Cotgreave, Chief Customer & Sustainability Officer at Seasalt Cornwall,said: “Cornwall is our home, and we are delighted to be partnering with Cornwall Wildlife Trust on this environmentally important pilot project. As a business, we have a responsibility to reduce our impact on the environment as much as we can and this partnership is one of the many ways we are endeavouring to do so. We have committed to supporting the project for the next three years and look forward to sharing its progress.”

Cornwall Wildlife Trust’s Fal Ruan nature reserve is home to dwarf eelgrass, one of two species of seagrass found in Cornish waters. Despite appearing smaller and less impressive than common eelgrass, University of Exeter researchers have discovered dwarf eelgrass beds are twice as good at storing carbon than those found in more exposed coastal locations.

Following the successful completion of the pilot project, marine experts hope it could lead the way for large-scale seagrass restoration and monitoring throughout Cornwall.

With support from Cornwall’s Your Shore Network – a movement of 17 volunteer-led marine conservation groups which the Trust coordinates – the technology could be rolled out at a grassroots level, benefitting local communities and contributing to the health of the planet.

Ruth Williams, Marine Conservation Manager at Cornwall Wildlife Trust, said: “We need large-scale, cost-effective restoration of Cornwall’s seas if we’re going to tackle both the ecological and climate crises. This exciting new project is just one part of the puzzle, but it will allow us to make a transformative step in restoring our seagrass beds for the benefit of nature, climate and people.”