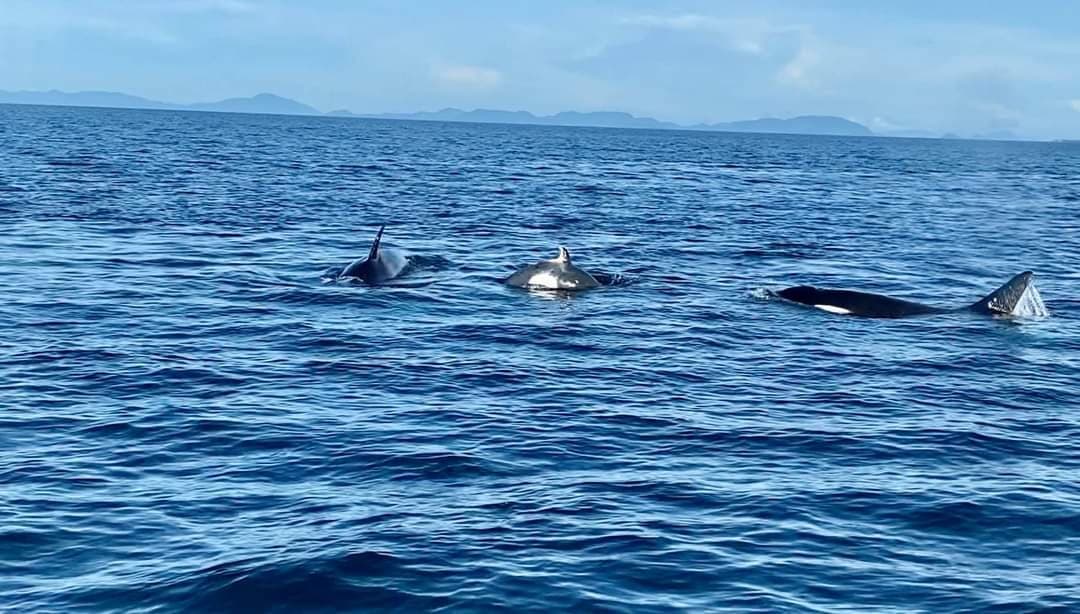 Marine biologists have been encouraged by the sighting of four orcas at Pulau Sipadan in Sabah last month, saying the encounter highlighted the importance of the Semporna region for marine mammals and provided valuable data for ongoing cetacean studies in the area.

Footage of the encounter posted on social media by the award-winning dive operator, Scuba Junkie, showed two adult orcas and two calves swimming to the north of Sipadan. One of the adults was recorded splashing the surface of the water with its tail – ‘lobtailing’ – which is thought to be a communication between individual orcas, or a warning to stay away.

As incredible as this sighting was – it is not uncommon for the Semporna region.

The region has been identified as a key part of the Western Celebes Sea Drop Off ‘Area Of Interest’, as designated by the IUCN Marine Mammals Protected Areas Task Force, because of the high number of marine mammal sightings reported there in the media, and on tourism and nature forums.

To date, 21 species of marine mammals have been recorded, most of which are oceanic or deep water species. Many of the species sighted are poorly understood, meaning that their presence in the Semporna region presents a unique opportunity for researchers to find out more about these enigmatic species – even if it is just to confirm a sighting there.

“It is not unusual for our guests to see marine mammals on their way to Sipadan or on the south side of Kapalai,” said Arapat bin Abdurahim, Dive Master at Scuba Junkie. “Quite often, it is dolphins – but on other occasions we are treated to rarer species such as the orcas sighted last week, melon headed whales and even sperm whales.”

“It is incredibly exciting for guests and staff to spot a marine mammal on the surface and be able to contribute  to the body of research on rarely seen species – for example in 2017, when we reported the first confirmed sighting of dwarf sperm whales in Malaysia,” Arapat continued.

The regular reporting of both orcas and sperm whales in the Semporna region, as well as observations of oceanic marine mammal species migrating through the Sulu and Celebes Sea, earmarked the region as one for closer investigation by scientists.

Scuba Junkie S.E.A.S, the marine conservation organisation based at Scuba Junkie’s Mabul Beach Resort is working with researchers to gather data on the marine mammals that occur in the area and enable more accurate identifications.

Scuba Junkie S.E.A.S received funds from the Society of Marine Mammalogy (SMM) to conduct a study on the whales, dolphins and porpoise in this region, in partnership with national NGOs.

“Orca have been documented in this region before, however, the partnership with Scuba Junkie S.E.A.S has enabled training to be given to local dive operator staff, so we now receive good imagery and clear descriptions from such encounters. This has helped enormously in documenting other species with certainty. It is exciting to see this species in the Sipadan area and to have the diving community engage so enthusiastically with our study” stated Dr. Lindsay Porter (Awards Committee, SMM). “

In addition, dive operators have assisted this study by also deploying acoustic monitors on the seabed to record marine mammal vocalizations, from which species identification can often be made.

“For many of the marine mammal species seen in the Semporna region, their use of the area is still unknown. It may be seasonal, to fulfil critical aspects of lifecycle patterns, for example shelter for mothers and young calves – such as the orca last week – or transient, as part of a migration route or larger oceanic passages,” continued Dr Porter.

“The use of acoustics as part of this project has allowed us to more consistently monitor the area, meaning that species identification does not solely rely on opportunistic sightings.  The acoustic recordings provide us with a detailed soundtrack of marine mammal vocalisations, which will provide us with a more detailed picture of how the mammals use this area.”

David McCann, Conservation Manager for Scuba Junkie S.E.A.S enthused, “We are glad to be able to work in collaboration with researchers and other NGOs to further understanding of the unique marine environment in this region.”

Mr McCann continued, “For example, this is not the first time we have seen an orca with a calf in this area – notably there was an incredible encounter when divers with Scuba Junkie witnessed an orca and calf eating a sunfish in 2019. Examining whether this area has an important role for mothers and calves would be of great interest to many parties.”

“We are also greatly looking forward to finding out what sounds have been recorded underwater, by animals that were perhaps not seen. It is fascinating to think about what else may be out there.”

Dr Porter concluded, “Reporting sightings is vitally important to the success of these projects – either through posting on social media, or by contacting biologists at Scuba Junkie S.E.A.S. As always, we urge caution and care in these encounters, please behave responsibly around all marine animals, do not get too close to animals or harass or stress them to get footage.”

“I applaud the divemasters at Scuba Junkie for their care and attention in their encounter with the orcas, keeping their distance and not entering the water because they could see two calves, rightly surmising that the adults could be protective of the young. It is quite possible the ‘lobtailing’ seen was a warning to the boat not to get too close.”