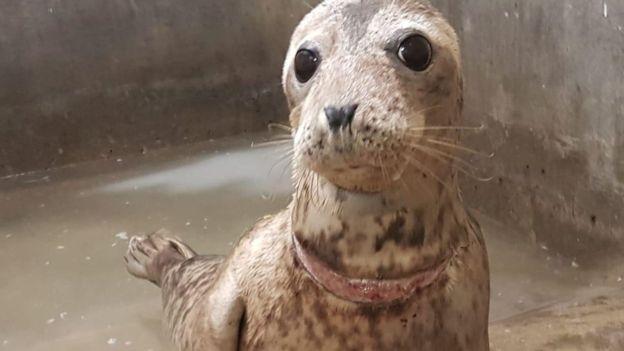 A grey seal has been rescued off Horsey in Norfolk after getting its neck stuck in plastic waste, becoming the 51st such case since 2008.

Scuba Diver only just reported on the 50th such seal to have a ‘necklace’ injury.

This grey seal, a young female, has been nicknamed Flowerpot after the shape of the plastic that was stuck around her neck. She was rescued on Sunday 20 October by volunteer group Friends of Horsea Seals, who took her to the RSPCA’s East Winch hospital for treatment.

Staff at East Winch carefully removed the plastic waste using bone pliers, but centre manager Alison Charles said that her injuries will take months to heal, and that she has been dosed with anti-biotics and given daily salt baths to assist with the healing process.