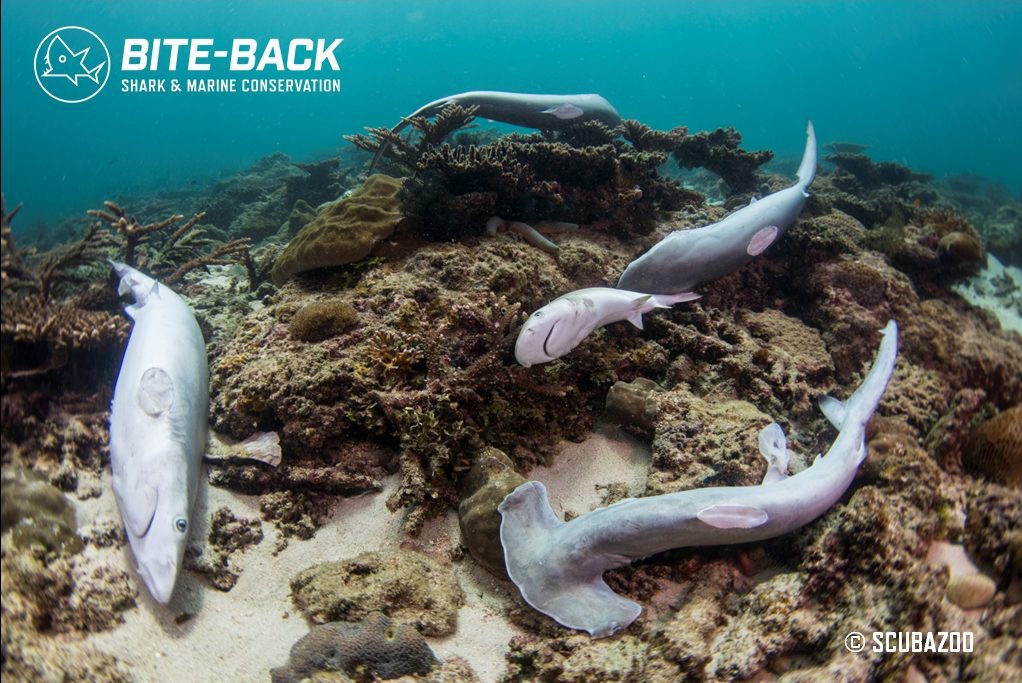 The government has today signalled the end of the UK’s involvement in the global shark-fin trade with an announcement that new legislation will require all imported and exported shark fins to remain attached to the shark carcass and only traded as a whole commodity.

The news has been welcomed by Bite-Back Shark and Marine Conservation and its supporters, including wildlife TV presenter Steve Backshall MBE (and GO Diving Show headline speaker) and chef Hugh Fearnley-Whittingstall, who both endorsed the charity’s No Fin To Declare campaign, calling for a post-Brexit ban of the personal import allowance of shark fins to the UK.

Before Britain left the EU, it had been bound by outdated legislation that permits anyone to carry up to 20kg of dried shark fins into and across European borders as part of their personal import allowance. According to Bite-Back, this loophole has been exploited by the shark-fin trade to legally ‘smuggle’ fins undetected for decades.

Graham Buckingham, campaign director at Bite-Back, said: “This news puts the UK at the forefront of shark conservation and represents a further blow to a global industry that is forcing sharks closer to the brink of extinction. We applaud the government for using Brexit to side-step this archaic EU legislation and instead lead the world in the conservation of sharks and the oceans. We hope and believe this announcement will encourage other European countries to impose similar constraints.”

It’s estimated that global fishing fleets hunt and kill 73 million sharks every year. As a result one in four shark species is now either endangered or threatened forcing populations of iconic shark species, including great whites, hammerheads, oceanic whitetips and threshers to a tiny fraction of those recorded 50 years ago.

Over the past decade shark fins — used as the title ingredient in shark-fin soup — have become one of the most-valuable seafood items in the world, a fact the charity says, has created a ‘marine gold rush’ to catch and separate sharks from their lucrative fins.

Shark-fin soup is widely regarded as a controversial dish. Not only are the cartilaginous strands from the fins tasteless, fishermen are known to cut the fins off the sharks they catch and throw the rest of the shark overboard to die.

Bite-Back first exposed the personal import allowance loophole in 2015. Alongside the detrimental environmental impact, the NGO also highlighted that no other item on the ‘green channel’ list compared in terms of volume or value. In fact, a 20kg consignment of fins is enough to make 705 bowls of shark-fin soup and has a black market value of around £3,600.

Spain, France, Portugal and the UK all feature in the top 20 shark fishing nations in the world. Remarkably though, for years, the UK has exported around 25 tonnes of shark fins to Spain for processing and onward sale to the Far East.

However, it will soon become illegal to import or export individual shark fins, making it extremely costly and inconvenient to buy and sell a product that is contributing to the decimation of vital shark populations.

Wildlife TV presenter and Bite-Back patron Steve Backshall MBE said: “Today’s news is a fantastic outcome for shark conservation and the culmination of years of campaigning from Bite-Back. The government’s decision to effectively ban the trade in shark fins will be significant in helping to restore the balance of the oceans. At the same time it sends a clear message to the world that shark-fin soup belongs in the history books and not on the menu.”