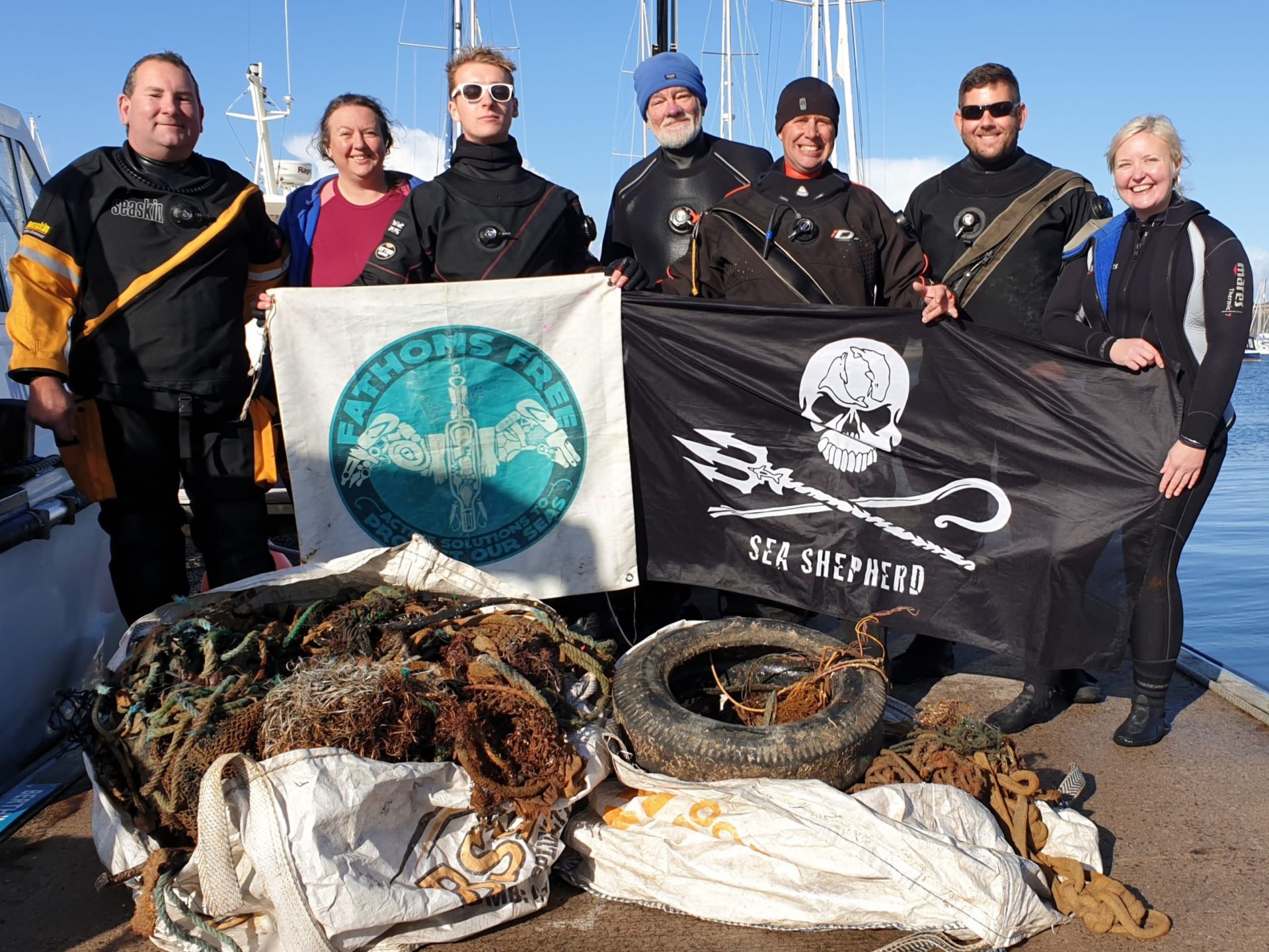 Abandoned, lost, or discarded fishing gear (ALDFG), otherwise known as ghost gear, are the deadliest form of marine plastic pollution, killing millions of marine animals, and thankfully, there are many organisations working to combat this problem, which has now led to the creation of the UK Ghost Gear Coalition (UKGGC).

In a bid to reduce the response time to reported sightings of ghost gear and to widen their geographical reach within our waters, Fathoms Free, Ghost Diving UK, NARC and Sea Shepherd Ghostnet Campaign have formed this new coalition to combine their extensive resources and improve efficiency.

From now on, when members of the public report ghost gear sightings on the platform of one coalition member, the data will become immediately available to all members of the UK Ghost Gear Coalition. This will ensure the quickest and most-efficient response, minimizing travel times by using the closest resources available.

Retrieving ghost gear is demanding in terms of logistics, and the coalition aims to meet these demands in the best way possible. By utilizing divers who are most closely located to the reported sighting, response times will be dramatically reduced, and the carbon footprint will be significantly reduced.

As well as these improvements in efficiency, UKGGC members will work together to ensure safe practices and use each other’s experiences in a program of continuous development.

The coalition also aims to build awareness of marine pollution and the ghost fishing phenomenon by participating in school programs and public events.

The UKGGC is open to working with other organisations dedicated to removing ghost gear from the sea before it harms marine life or reaches our shores. If there are any other organisations who would like to join the coalition and work with them, then contact Tony Land at: tony@seashepherduk.org

Who makes up the coalition?

Formed in 2014 by conservationists to address the issue of marine plastics and debris around the shores of Cornwall. Fathoms Free has now evolved to a team of volunteer divers dedicated to dealing with ALDFG and marine debris. With their own RIB for faster responses from any coastline and a great relationship with charters in the area, they're tackling the issue head on by cleaning up the wrecks and reefs of ghost fishing gear around South West England.

Ghost Diving UK is part of a global organisation founded in 2012, run by volunteer scuba divers who are specialised in the removal of lost fishing gear and other marine debris. They carry out innovative and challenging nature conservation projects independently or together with other common goal organisations. Through significant clean-up results and inspiring underwater photography, they have been instrumental in bringing the phenomenon of ‘ghost fishing' to the attention of the public. In the UK, they operate in the north from Tynemouth and target wrecks in the North Sea and soon on the south east and west coasts.

Neptune’s Army of Rubbish Cleaners (NARC) is an award-winning charity formed in 2005 by local diver Dave Kennard. The charity is entirely run by volunteers who are passionate about having a positive impact upon the marine environment. Since inception NARC has carried out over 2000 underwater clean-ups and worked with a number of partners in the UK and abroad. Along with clean-up diving, NARC focuses on raising awareness of the impacts and working on collaborative solutions along the Pembrokeshire coastline.

As part of a global effort by Sea Shepherd to combat the issue of discarded fishing gear, Sea Shepherd UK launched its Ghostnet Campaign in January 2018 to concentrate on known problem areas around UK coastal waters. The campaign will operate out of Grimsby and focus on the East Yorkshire/North Lincs coastline during 2022.