Technical diver, skydiver, author, presenter and all-round Action Man Andy Torbet is back on our TV screens from tomorrow (20/2/2018, CBBC, 4.30pm-5pm), in the Children’s BBC series Beyond Bionic.

In this 30-part series, Andy Torbet will employ all manner of technological wizardry in order to give him a fighting chance of matching the super-skills of a wide variety of wild animals. 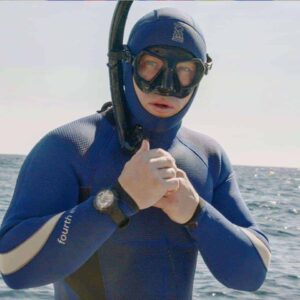 As the promo spiel goes, ‘Andy really will have to go Beyond Bionic if he’s got any chance of beating nature’s very own Top Gun, the peregrine falcon, when he tries to match its top speed of 240 mph. Andy faces an uphill struggle against the climbing brilliance of the gecko, where his challenge is to scale a completely flat all-glass 52-metre-tall building. Andy may have bitten off more than he can chew when he comes jaw to jaw with the mako shark, and has the task of matching its supreme swimming and breaching skills. And, in the blistering heat of the Californian desert, Andy has to find a way of doubling his sprinting speed to try and equal the fastest bird on two legs, the ostrich, in a head-to-head 60-metre race.
Other animals featured in the series include the flying squirrel, gorilla, seal, giant Japanese spider crab, Darwin’s bark spider, hummingbird, grasshopper and Pompeii worm.
Andy’s mission to take on these incredible animals sees him travelling the world, touching down in the USA, Canada, Norway, Spain, Iceland, Italy, Austria and Japan, to try out the latest science and technology that will give him the edge when it comes to succeeding or failing in his audacious challenges. It’s time to go Beyond Bionic!’