The Solomon Islands is a Melanesian nation to the northeast of Australia. It stretches between Papua New Guinea to the west and Vanuatu to the southeast. Made up of 922 islands, 350 of which are inhabited, the Solomon Islands were formed by volcanic and earthquake activity over the years. The islands have been largely untouched by tourism in the last 100 years. As such, there hasn’t been pressure placed on the various underwater environments and many of the gorgeous dive sites remain uncrowded.

In ancient times, the Solomon Islands were inhabited by the Melanesian people, Austronesian speakers and the Polynesians. The first European to arrive was Spanish navigator Álvaro de Mendaña de Neira. He was followed in the 19th Century by a series of missionaries who largely failed in their mission due to the custom of recruiting locals into forced labour in Queensland and Fiji.

As a result of this labour trade, violence erupted and Great Britain declared the islands as a protectorate in 1893. Throughout World War II, the Solomon Islands were the scene of intense fighting between the United States and Japan, particularly during the Battle of Guadalcanal. Finally, independence was gained in 1978.

Today, the country enjoys a constitutional monarchy under the head of state, Queen Elizabeth II. In recent history, ethnic violence threatened the stability of the country between 1998 and the early 2000s. However, in 2003, an Australian-led peace force disarmed the ethnic militants and improved the situation on the ground. In recent years, the country has enjoyed peace and stability, making it a safe and beautiful destination.

You now get a true feeling of island life in some of the most stunning unspoilt scenery. The islands have a rich history & there is no escaping the impact that WWII has had on her providing a major form of tourism, which is now deeply imbedded into the fabric & economy of the country.

If you are into diving, then you will certainly not be disappointed, this is diving heaven! For incredible reefs, lots of fish, and very few divers – the Solomon Islands is the place to be. You have some of the best wrecks in the world (including aircraft), caverns, pristine reefs, large sea fans, soft corals, lots of macro & pelagic species. There is an incredible diversity of hard corals. In fact, the diversity of the Solomon's is hard to beat, rivalling any other Indo-pacific destination for coral reefs, marine life and diversity and a bonus, topside you get great cultural experiences & fascinating historical tours.

The major dive areas can be defined as Guadalcanal, Tulagi, Munda, and South Marovo Lagoon. Guadalcanal and Tulagi host a wide variety of WWII wrecks as well as many other shipwrecks. Munda and South Marovo Lagoon feature beautiful reefs, sheer walls, muck diving and some sites that attract a number of pelagic species. While most of the reefs begin just off shore, the wrecks might require a bit of a swim or a boat ride. Some of the wrecks can be quite deep, reaching over 70 meters or more. Don’t be put off by this as many wrecks sit at more accessible depths under 40m.

Whilst there are a huge number of wrecks around the islands, the majority of the famous & documented ones are situated on the coastline of Honiara or at the island of Tulagi. Our tours are based between these two destinations. Tulagi is home to several deep wrecks including the USS Aaron Ward & the Kanawha. Also in this area are the Catalina and Mavis flying boats which rest in a comfortable depth for sportdivers.

Basing yourself at the Raiders Hotel will provide you with the opportunity to dive these wrecks, easily filling a two week tour of prime diving. On the other side of the channel is Honiara and along her coastline are several great wreck dives including the John Peen, Azumasan maru, both deeper dives. Whilst the B17 bomber, Hirokawa Maru & Kinugawa Maru all are accessible as beach dives with stunning underwater scenery.

If you do decide to take the shore dives be prepared for a bone jarring truck ride to get you to the destinations as these are not all close at hand & the roads resemble a motocross track rather than a highway. Time to is a factor as they will take a full day to complete.

The Hirokawa Maru & Kinugawa Maru are both very simple dives allowing you to walk in off the shore and descending to shallow depths where the wrecks are very open and accessible. On the Hirokawa Maru the coral life is beautiful with stunning gorgonian fans that fill the passage ways as you swim though the wreck. Both wrecks provide great photographic opportunities with natural light penetrating the wrecks with shafts of beams in a background of cathedral structures. They are now both broken due to time and weather but there is plenty of structure left to remind you of their sizes.

In the same area lie the Azumansan Maru & Sasako Maru. Both much deeper wrecks and both need boat support to dive. The Azumansan has to be one of my favourite wrecks with her huge cargo holds and surprise cargo of Japanese motorcycles with sidecars. This is a wreck you could spend hours exploring but time is against you with the relatively deep depth. There is another challenge too with the very silty bottom that almost covers her hidden treasure. It is not until you get very close can you make out what is now hidden away.

Moving in the opposite direction along the coast lies the John Penn. Again this is a deeper wreck and can present herself as a challenging dive due to the currents that can often frequent her. In contrast to the Azumansan Maru, due to her location at a mouth of a river estuary, visibility can often be restricted too.

Moving back across the Guadalcanal to Tulagi are a number of sites which are often not covered in articles; such as the RNZA Moa; the only divable New Zealand warship lost in an act of war. The RNZN Moa lies in 36 to 42 metres of water. Vis can be poor (for the tropics that is), but well worth the visit. Be sure to check out the Depth Charge racks at the stern and the 4” gun at the bow. The depth of this wreck allows plenty of time for exploration.

Also in this area lie several sea planes from both US and Japanese forces. Several Kawanishi (code name Mavis) 4 engine reconnaissance / VIP transport seaplanes, were sunk.  The two main sites lie in 30 metres of water and wrecks are big enough to keep you occupied for an entire non-decompression dive and more. Sitting upright in approximately 26m of water sits a Catalina flying boat which is often used as a shallow non-decompression second dive for the tec divers. Largely intact, she is an interesting dive and provides a contrast to the shipwreck dives.

For those of you requiring a little more variation to wreck dives there are a number of stunning reefs to explore. One particular dive are the Twin Tunnels,  The top of the reef is in 12 -16 metres of water and features two tunnels eroded in the edge of the reef descending down to a common cavern exiting to the wall at 35 – 40 metres.  The walls are lined with gorgonian fans and the caverns crammed with fish life. The top of the reef is spectacular in its own right should you wish to stay outside. 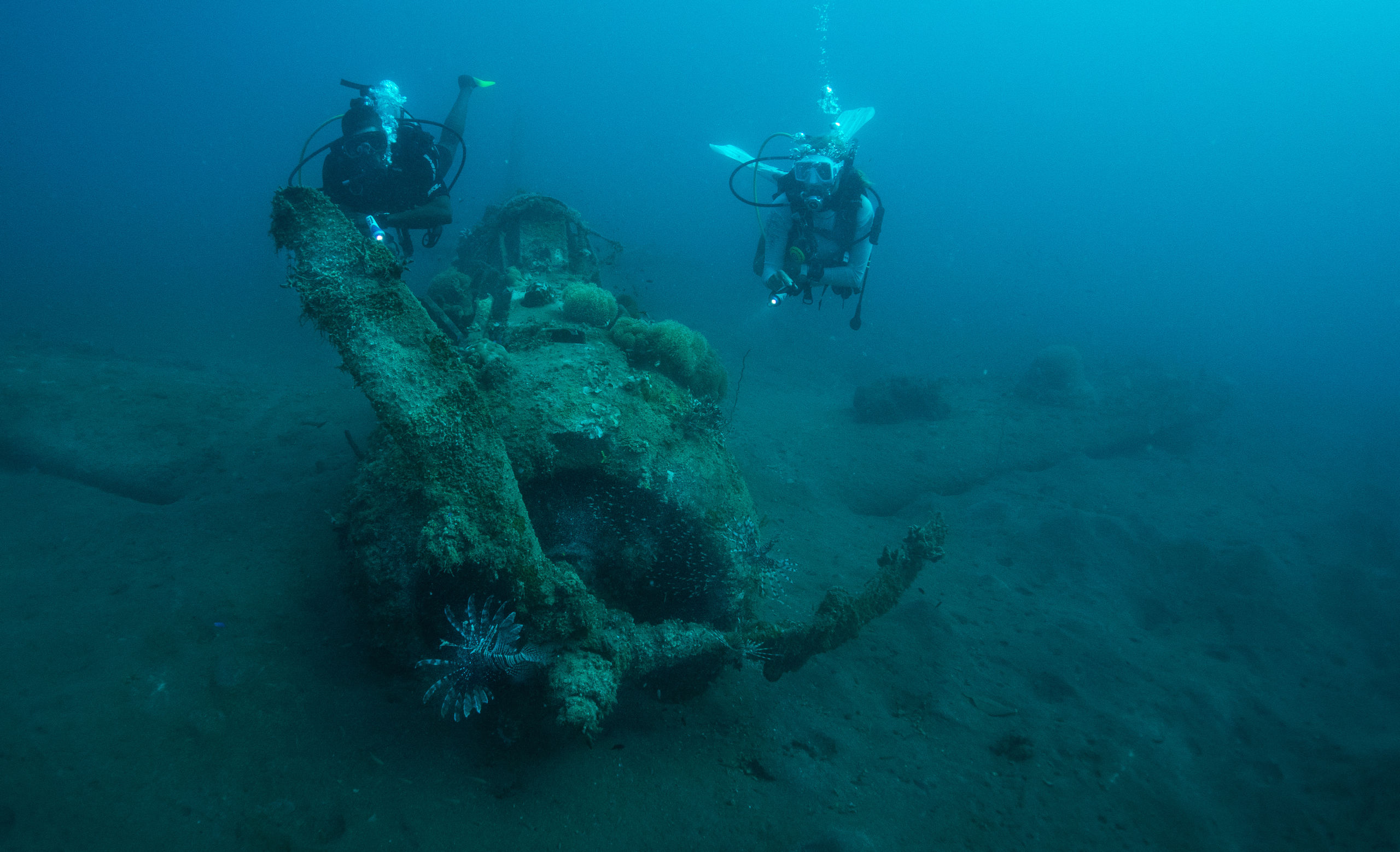 Away from this area is the Leru Cut at Russell Island. Probably the most famous dive site in Solomon Islands, Leru Cut is an indent into the side of a small island which runs for about a hundred meters, around 12m deep. You can surface at the end of the “cut”, and feel bizarre being in scuba gear in the interior of the island, while looking up at huge trees with vines hanging down and birds calling.

Mbulo Caves at Mbulo Island has a series of caves cut into the reef around the island. This dive is a photographers dream swimming in and out of caves, finding beams of light to shoot with a green jungle canopy above you providing a stark contrast to the view below.

The Solomon Islands still produces some amazing discoveries. With so many aircrafts and shipwrecks still missing in action, more & more are being discovered as new dive sites. During our time at the Raiders we were lucky to help identify a recently discovered Wildcat fighter plane located very close to the hotel itself.

Events like this bring a new meaning to the dives you are undertaking and it takes a destination like this to give you these opportunities. To be able to summarise the Solomon Islands is very difficult as you are in danger of understating how good the diving is here. This is a destination that has everything with respect to diving in a true, raw, adventure style which is mirrored by the country itself. If you love diving then you won’t be disappointed with the Solomon Islands.

Diving is available year-round in the Solomon Islands. However, the monsoon season does occur from January until April and brings a greater chance of rain and windy days. June through August is slightly cooler than the rest of the year, although temperatures remain fairly warm and humid. Water temperatures make for comfortable diving, ranging from 81 to 88°F (27 to 31°C).  Underwater visibility averages between 20-30m.

Where to stay while diving the Solomon Islands

To see the wrecks around Tulagi, the best hotel for accommodation, diving and convenience is the Raiders Hotel. In Honiara there are a variety of hotels to suit your budget & style.

From NZ, most people fly direct to Brisbane, changing planes once. Alternately you can fly to Fiji, and also change planes once there. Both Air Solomons and Air New Zealand provide regular schedules.