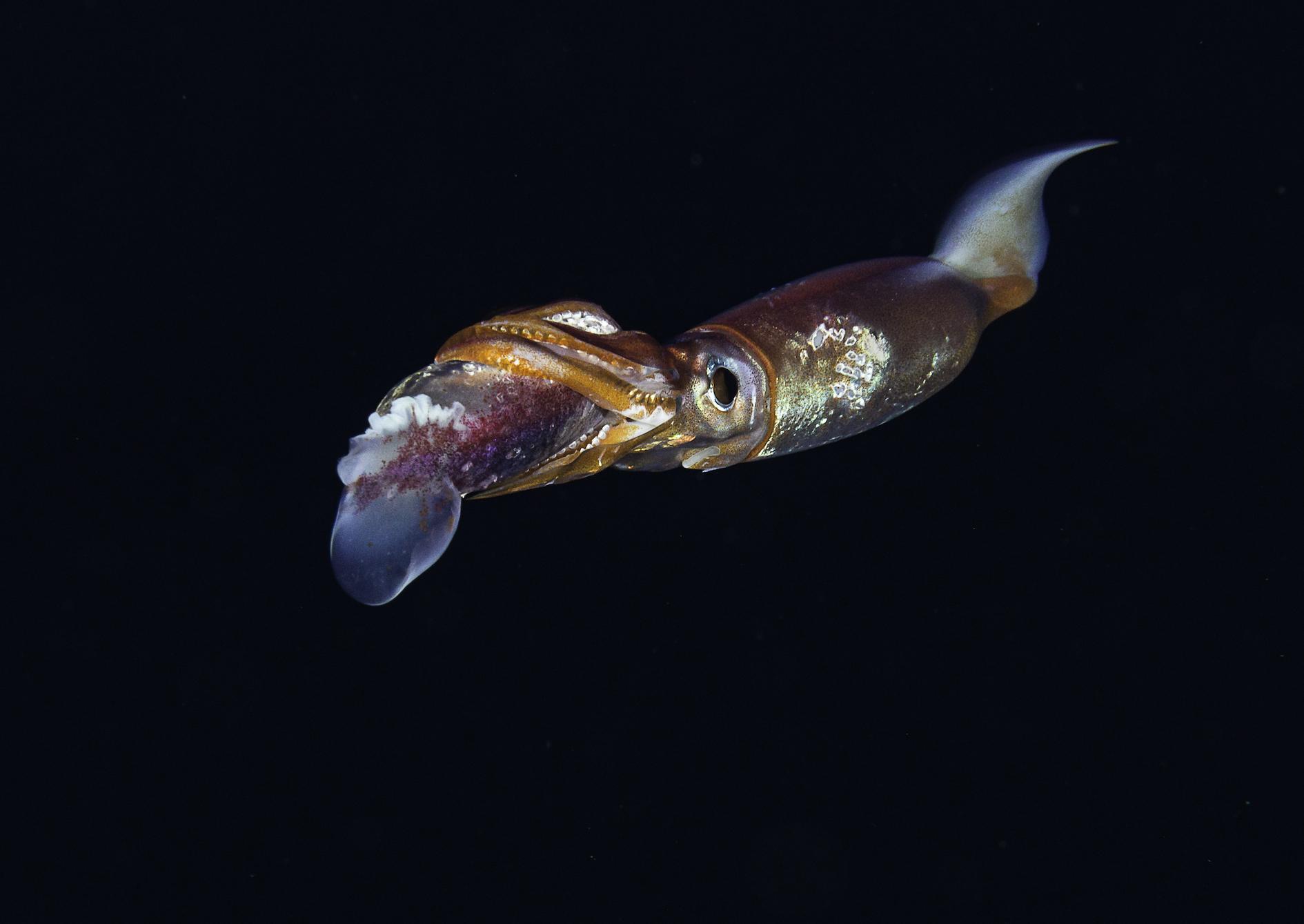 Long after sunset, 10m down and miles offshore, a squid stalks in the inky darkness of the Yap Trench in the western Pacific Ocean. With a lightning-fast strike, it captures its prey in a forceful act of cannibalism. The split seconds that unfolded in this drama of one squid catching and devouring another of the same species was captured by blackwater diver/photographer Sheila Ott of Switzerland – and her image was recognised as the Best of Show by the international panel of judges during last month’s MantaFest 2019.

MantaFest is hosted by the Manta Ray Bay Resort & Yap Divers on the remote island of Yap in Micronesia.

Blackwater diving is a fairly new scuba diving endeavour, done well after dark and far away from land. Lights are hung from a boat that drifts in the open sea. During MantaFest, the divers entered the water in the Yap Trench, the second deepest ocean trench in the world, that falls to depths past five miles. Then, camera in hand, they wait to see what the lights will attract. They search for photogenic pelagic larvae to drift by, but anything can show up. In this case, for Ott, it brought an act of nature few people have ever seen.

“Blackwater night diving is so addicting!” exclaimed Ott. “If you get a chance, just do it! I first saw the squid attack at some distance and took off kicking to try to get a shot.” Ott’s efforts paid off as she won the top prize and racked up a free dive trip and other prizes.

During the annual two-week photo school and contest, the protected reef and ocean off Yap’s pristine shores produce daily shows from marine creatures big and small, including its famous resident sharks and manta rays and a plethora of small, colourful tropicals like the brightly coloured mandarinfish.

Now in its 13th year, MantaFest brings underwater photographers, both amateur and professional, to the small island to compete for prizes, attend workshops, take tours of the island, and experience the unique culture of Yap, considered to be among the best preserved in the Pacific region.

Workshops are led by experts in the field providing their knowledge of still photography and video workflow and editing software. They also offer advice during sessions with local models in settings that include the island’s unique stone money banks and traditional dance performances. Daily underwater shoots provide opportunities to dive with the manta rays, sharks and other creatures that inhabit the surrounding, protected reefs and steep coral walls.

Bennett was also the proud winner of the Crying Towel Award. “This special award is for the last dive day, after everyone has submitted their contest entries,” said Bill Acker, founder/owner of Manta Ray Bay Resort & Yap Divers. “Murphy's law is that one of the best images or video clips is captured the day after and, as history repeats itself, a video of a Zebra shark waking up and swimming off into the channel won a special edition Mares – Just Add Water mask and snorkel and a custom crying towel.” Bennett was overcome and immediately used the towel for its stated purpose!