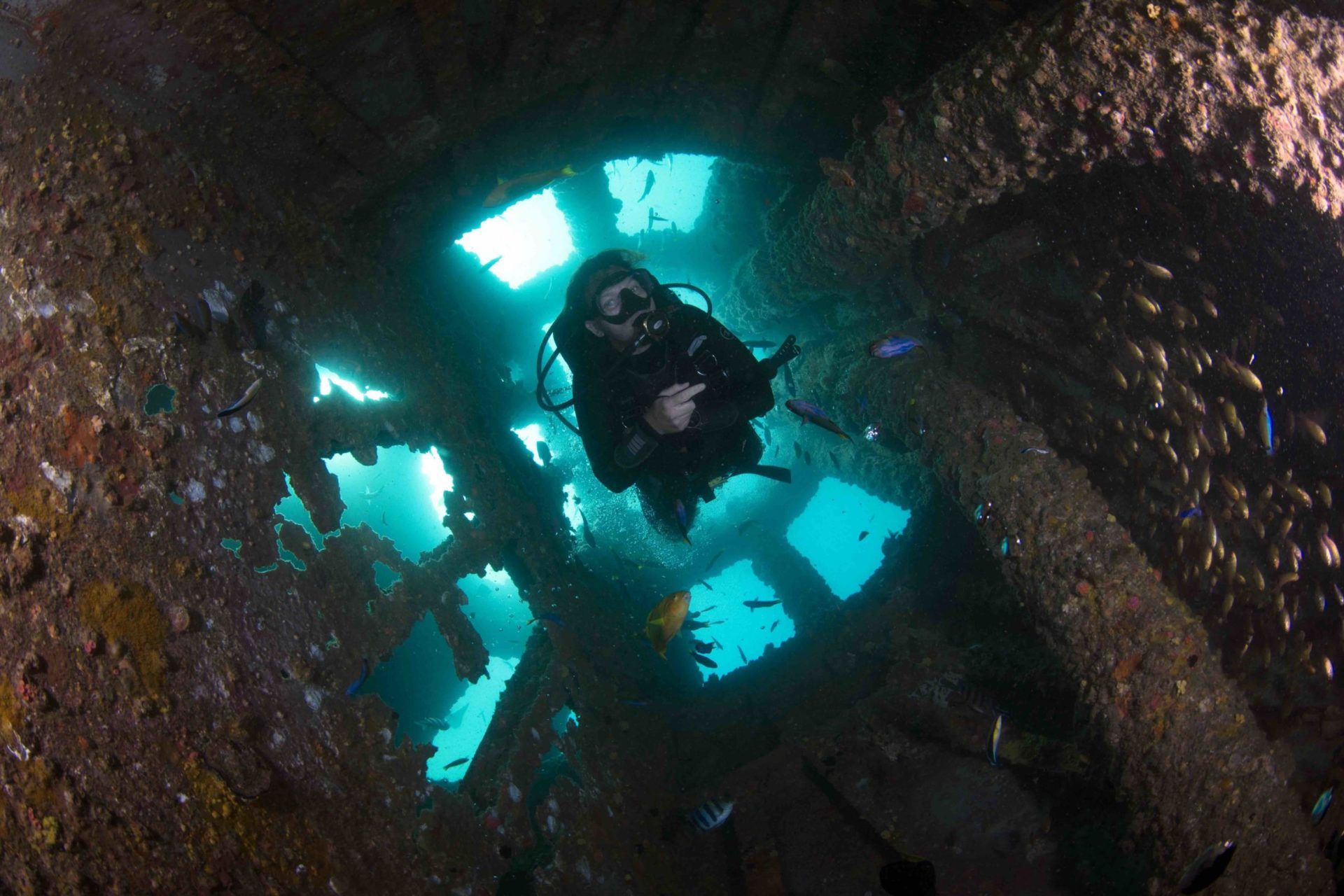 On my last visit to the Ex HMAS Brisbane in January, we were treated to 20m plus visibility. On my most recent trip, the water clarity was considerably less. However, this was expected as the east coast from Sydney to Brisbane had been battered by storms and subjected to flash flooding. The canals that we navigated through on our way to the wreck were an unwelcoming brown colour, and even 3 kilometres out to sea at the dive site, the water was still of a decidedly green hue.

Thankfully the green water was only for the first couple of meters, and under this murky layer, the visibility improved considerable, to perhaps 8-10 meters. The wreck itself was cast in a slightly greenish glow as the sunlight struggled through the opaque upper layer of water.

Fortunately, the fish had paid no heed to the inclement weather from earlier in the week and were still engulfing the wreck. A school of surgeonfish grazed on the forward upper deck just in front of the gun turret, the former walkways were still packed full of glassfish, and brightly colour wrasse continued their frantic search for food. Just off the port side, a massive bait ball stretched into the gloom and a colossal grouper hung in the water column waiting for the inevitable snack to hurry past. Joining in for the all you can eat buffet were Jewfish, snapper and trevallies.

Travelling down the wreck we encounter a friendly octopus that was happy to stick out of a ventilation tube on the deck and pose for pictures. At the stern, three large cownose rays soared overhead, and an eagle ray also made a flyby. From the stern we made our way back up the wreck to the forward chimney stack where we conducted our safety stop. The chimney is at a convenient 5 meters of depth and is usually covered in large shoals of silver batfish. Their larger, more solitary cousins, the Round Batfish, also frequent the upper reaches of the vessel and are keen on sneaking up on you only to swim quickly away when you turn around.

We spent the entirety of the second dive in the ship’s interior. Our preferred method of entry was the chimney stack which leads down into the boiler room in the depts of the vessel. Good buoyancy is essential on and in the wreck as almost every surface has a well-camouflaged scorpionfish attached to it.  After exploring the boiler room, we made our way to the engine room, where a resident lionfish gets plumper with every visit on a never-ending feast of glassfish. From there, we snaked our way through this vast vessel going from room to room, each seeming to contain more fish than the last.

This really is a spectacular dive at the moment; even without all of the marine life, it would be amazing, but the sheer mass of fish takes the Ex HMAS Brisbane to another level.

The Ex HMAS Brisbane is located just off the coast at Mooloolaba on the sunshine coast, about 1.15H drive from Brisbane Airport.

Scuba World is conveniently located on one of the canals in the area so you can kit up at the dive centre and then just walk onto the boat. The dive centre is well laid out, clean modern and it is clear that a lot of thought went it to its design and a lot of pride is taken in its appearance. The boat is fast and comfortable, and the crew were friendly, professional, knowledgeable, and very helpful.