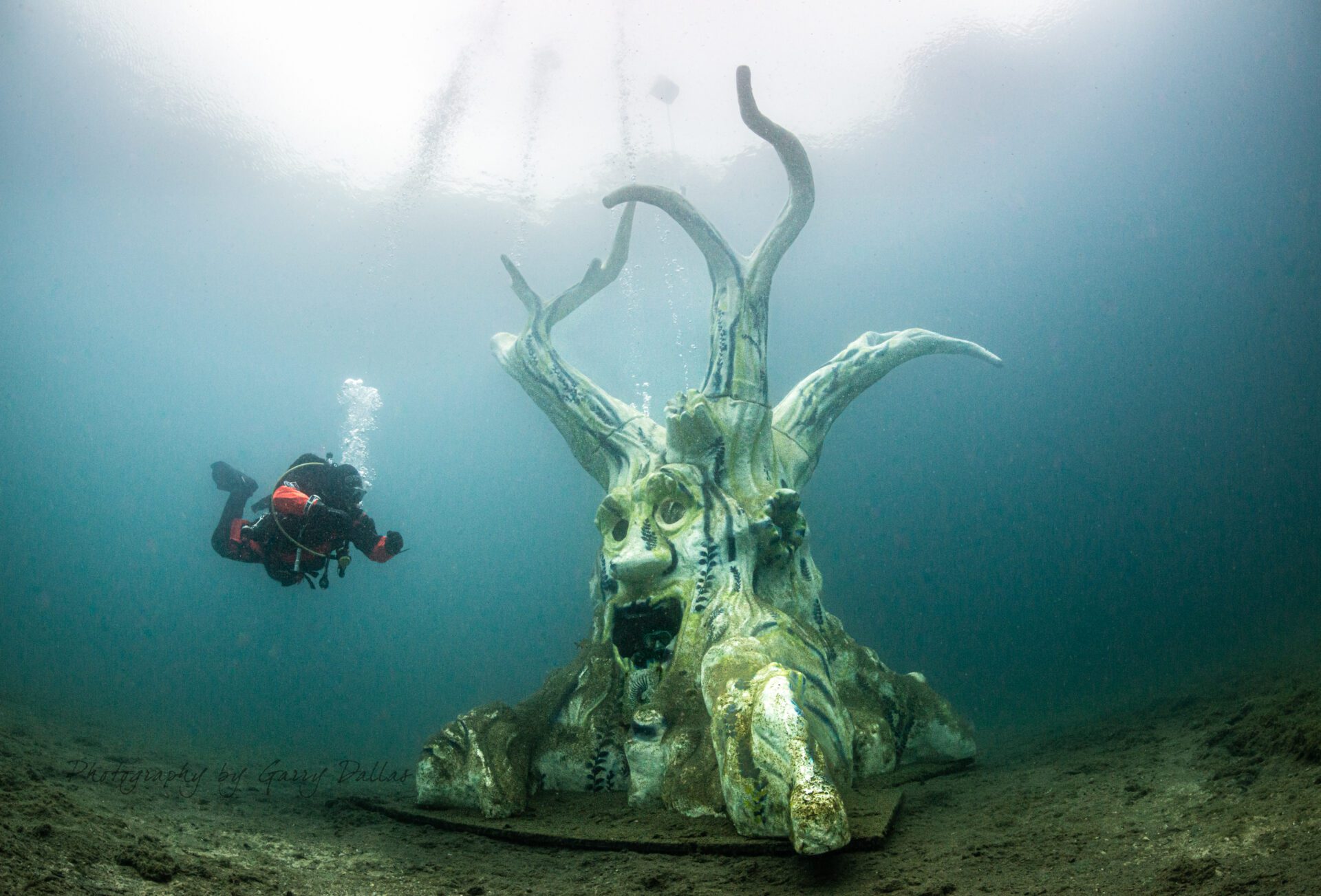 Why You Should Stay Land Based in Raja Ampat

Raja Ampat is no longer solely the relm of...

Click here for Scuba Diver Issue 67 There is now...
Contents hide
1 Mark Evans heads into Lancashire in search of mystical creatures – and finds Treebeard, something eerily reminiscent of a Lord of the Rings character…
2 “This odd assortment has been joined by the impressive Treebeard, a friendly-looking fibreglass creation that reminds me of an Ent from Lord of the Rings”
3 “Throw in a few of the monster sturgeon swimming around him, and you do start to feel like you are in some strange other-world”
4 Capernwray Diving Centre

Mark Evans heads into Lancashire in search of mystical creatures – and finds Treebeard, something eerily reminiscent of a Lord of the Rings character…

Inland dive sites around the UK have sunk all sorts of oddities over the years as attractions for visiting divers. Boats are an obvious candidate, along with cars, military vehicles, airplanes and helicopters. But then there are the more-bizarre additions, such as Vobster’s scary Jesters, the Loch Ness Monster in Stoney Cove, and the theme park animals in the depths of NDAC.

Lancashire’s Capernwray has more than its fair share of weird-and-wonderful attractions, including two horses, Shergar and Lord Lucan (from Blackpool Pleasure Beach), Sandy the She Devil (from Blackpool Illuminations), a herd of plastic pigs currently residing near a veritable town of garden gnomes, and even a flying saucer, plus an alien who keeps popping up in various places.

This odd assortment has now been joined by the impressive Treebeard, a friendly-looking fibreglass creation that reminds me of an Ent from Lord of the Rings. This large structure is normally seen in playgrounds and the like, but after languishing in a storage unit for years, he was rescued from oblivion and found a new home at Capernwray.

“This odd assortment has been joined by the impressive Treebeard, a friendly-looking fibreglass creation that reminds me of an Ent from Lord of the Rings”

When he arrived, he was a stark white, and looked a little sorry for himself without his impressive outstretched branches in place. However, by the time he was ready to be sunk in his new forever-home, he had been given a lick of carefully applied paint, which makes him much more striking.

He now lies out in the relative shallows beyond the Apeks van and Thunderbird 4, and just before you get to the vintage Orca motor cruiser. It can be a fair old swim over to Treebeard, but my son Luke made short work of it by liberating our friend Dean Martin’s scooter!

Sitting in such shallow water means on a nice sunny day, Treebeard is bathed in light, and he looks very eye-catching with his branches reaching up towards the surface.

Treebeard is a great prop for photography. Shooting upwards towards the surface gives a pleasing effect, especially with ripples on the water, and as he is hollow, you can get your buddy inside to either peek through his gaping mouth, or act as torch holder to send beams of light out of his eyes.

“Throw in a few of the monster sturgeon swimming around him, and you do start to feel like you are in some strange other-world”

The longer he is in the water, the more growth is taking hold on his body and branches, which gives it an even-more eerie, fantasy atmosphere. Throw in a few of the monster sturgeon swimming around him, and you do start to feel like you are in some strange other-world. If you are lucky, you might even see the little albino sturgeon cruising around, although his current haunt tends to be under the wing of the airplane.

Capernwray is one of the most-popular inland dive sites in the UK, and for various reasons. It is extremely picturesque, sitting right on the edge of the Lake District, boasts more sunken attractions than virtually any other similar facility, has a massive stock of fish life, including sturgeon, roach, perch and trout, plus the odd Koi carp, and has a fabulous clubhouse with the Porthole Restaurant for grabbing a pre- or post-dive bite to eat and a warm drink – you are even welcome to head inside wearing your drysuit! Throw in a warm Lancashire welcome from all of the team, and you have all the ingredients for a great day of diving.

Capers, as it is known by its legions of fans, is also a popular location for open-water swimming, so don’t be surprised to see people wandering past in swimming costumes and towels while you are bedecked in drysuits and thermal undersuits!