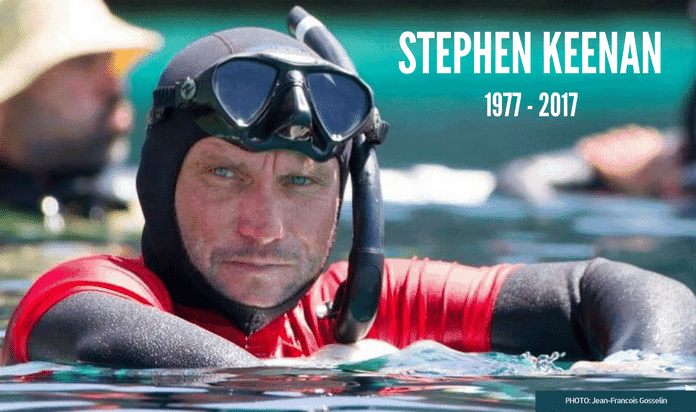 The freediving fraternity has been rocked by the sad news that Stephen Keenan, co-owner of Dahab Freedivers and Chief of Safety for many freediving competitions around the world, died on Saturday while coming to the assistance of a freediver attempting to swim through the iconic, infamous arch in the Dahab Blue Hole.

Full details are still unknown at the moment, but it is understood that Italian freediver Alessia Zecchini was attempting a Constant Weight No Fins (CNF) dive of the Blue Hole arch, and Keenan was providing safety cover. The Arch, a 26 metre long tunnel at a depth of 56m, has claimed many lives of divers over the years, but that doesn't stop people seeing it as a challenge to be overcome.

It appears Zecchini became disorientated at 50m and Keenan rendered assistance, but as they ascended, they came up some distance away from the other safety divers. Keenan seems to have suffered an in-water blackout in the last 10m of the ascent with Zecchini, and due to the distance between them and the other safety divers, there was a short delay in rescuing him, and he sadly died while in a taxi enroute to the hospital.

Stephen Keenan, who was 39, was originally from Dublin, Ireland, and had been active in the freediving community since 2009, when he stumbled across the sport in Dahab. He went on to co-own, along with Pascal Berger and Miguel Lozano, one of the world's most-dynamic freediving schools, Dahab Freedivers, as well as set a number of Irish National Records.

He was an AIDA, PADI and EFR instructor trainer, and had taught hundreds of divers in Dahab, Spain and the Philippines, though he was best known for his role as Chief of Safety for a number of the Vertical Blue freediving competitions, as well as providing safety cover at freediving competitions around the globe.