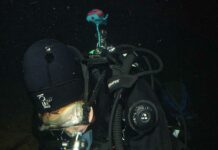 The Best Dive Computer Under £300

Remember to subscribe to the Scuba Diver YouTube Channel so you don't miss out on any future videos.

Hi Scuba Diver fans and welcome back. Dive computers are one of the core essentials of your diving arsenal. Yes, you can go old-school and dive without one – fondly remember dive tables and a diving watch – but why not make full use of the technology at your disposal and get the most out of your diving – with a dive computer, you will be able to safely extend your dive times, especially when you are doing repetitive days of diving.

I look at the budget end of wrist-mounted computers. Dive computers are one of those items that have come down dramatically in price, and what you can get for your money at the budget end of the scale is pretty phenomenal. Now, there is a solid argument for going for a dive computer that can grow with you as your dive skills develop, and I myself am a big proponent of that way of thinking.

Buy once, buy wisely has been my mantra for a long time. However, it has to be said, the vast majority of people starting out on their diving journey will never venture into open-circuit technical diving or closed-circuit rebreathers, so really, they don’t need an all-singing, all-dancing computer that has a whole host of features they will never, ever use or need. That said, some of the wrist-mounted dive computers in our budget line-up – we have set the price bar at under 300 British pounds – do have features that would allow the user to dabble in some entry-level technical diving (I am talking multiple nitrox mixes and gauge mode) so they do have the ability to take you further on your diving adventures without breaking the bank.

By and large, though, these computers are designed for recreational diving, with air or nitrox, and then it is down to the manufacturer as to the type of screen display, number of control buttons, whether it has a user-changeable or rechargeable battery, has Bluetooth connectivity for downloading your dives, and so on. Right, so you have a tight budget for your first dive computer – let’s take a look at what is available.

The i330R is the new kid on the block, and has literally just hit the marketplace, and it is certainly going to give the established players a run for their money, as it is the only one in this price bracket with a full colour screen. The i330R is quite a compact unit, but with a vividly bright full-colour IPS display, it is exceptionally easy to see even in bright sunlight, bad visibility and at night. Navigation is via two buttons mounted on the right hand side, and the intuitive menus are simple to scroll through and make changes.

It uses a tried-and-tested Z+ algorithm to safely maximise your dive time, and once you are back on the surface, you can download your dives to your phone or tablet via Bluetooth. The i330R is factory-sealed, and has a rechargeable battery – it is the only computer in this line-up with a rechargeable battery – so there are no worries about flooding it. Battery life is good, but you can top up the juice via the USB and magnetic charging cable as and when you need to on your dive trip. The brightness of that screen can also be dialled down if you want to extend the battery life a little more. The computer is fitted with a NATO-style webbing strap, which is strong and secure and looks good as well.

The Cressi Leonardo is one of the cheaper models in this budget line up, but it still has a solid skill set. This puck-style computers uses the Cressi RGBM algorithm, which Cressi says has been specially adapted to offer safe decompression diving in a multi-day, repetitive dive format, which they reckon makes the Leonardo particularly effective for holiday and liveaboard diving. Navigation around the menus is a doddle, as it only has a single button. It has three modes – air, nitrox and gauge – and can handle a single nitrox mix from 21-50%.

There are three levels of user-adjustable conservatism. It is powered by a user-changeable CR 2430 battery, which is said to last approximately two years, but that obviously depends on how many dives you are doing annually. It also comes in a selection of colours for those who want to brighten up their kit.

The Mares Quad is one of the larger computers in this line up, but thanks to its neat design, it is not particularly cumbersome. The display itself is absolutely huge and the digits on the segment LCD screen are easy to see, but the computer body is quite slimline on your wrist.

Navigation of the menus is simple via the four large buttons, and once on the dive, these become mirrored, so the top two buttons perform the same function, as do the lower buttons. This can certainly make things more straightforward when you are on the dive itself. It offers three modes – air, nitrox and gauge – and can handle up to three nitrox mixes (21-99%). Once you return from your dive, you can download your dives to your phone or tablet via a USB cable or, via an upgrade, using Bluetooth. It has a CR2450 user-replaceable battery, and this lasts for approximately 200-300 dives. It also comes in a selection of colours for those who want to brighten up their kit.

The Scubapro Aladin Sport is a puck-style dive computer that has two buttons mounted on the front to navigate through the menus. It has a predictive multi-gas ZHL 16 ADT micro-bubble algorithm, which will calculate an intermediate stop based on your nitrogen loading, current and previous dives, and your breathing mixes for safer diving, and the user can adjust the micro-bubble level of conservatism to reflect their age, physical fitness and experience. The Aladin Sport is one of only two computers in this price bracket – along with the Suunto Vyper Novo – with a compass to aid navigation underwater. It is powered by a user-changeable CR 2430 battery, which is said to last approximately two years, or 300 dives.

The Vyper Novo is the latest incarnation of the trusty Vyper, and it has had a makeover from its previous guise. It now boasts a new screen display which features a blend of segment and dot-matrix LCD, and it has four buttons for navigation, which brings it in line with Suunto’s range of wristwatch-style dive computers.

The Vyper Novo utilises Suunto’s RGBM algorithm for optimised bottom times and ascent times, and it can deal with up to three nitrox mixes, ranging from 21-99%. It is the only computer in this line up that has the capability to offer air integration with an optional transmitter on your first stage, and along with the Scubapro Aladin Sport, one of two with a digital compass. So, that’s our selection of budget wrist-mounted dive computers.

But which one is the best?

I have not personally dived all of these yet, but on paper, that new Aqualung i330R takes some beating. The venerable Suunto Vyper Novo has a compass and the ability to use air integration, whereas the i330R has neither of those capabilities, but there is no getting away from that outstanding colour screen, and the rechargeable battery. And that price point – £269 for a computer that can handle up to three nitrox mixes and have those features is a game-changer. It is certainly going to be interesting seeing how the other manufacturers react to this new computer with any future changes to their budget range.

What is your favourite dive computer?

If you are a new diver, are you thinking technical diving is in your future? Leave your comments below, and if you have a question, fire away – if we can’t answer it, I am sure some of our ever-growing subscribers will be able to assist. Remember to come back next week, when we will have a comprehensive review of the new Aqualung i330R.

As always, if you are going diving, stay safe!

Also do check out 5 breathing techniques