It sounds like something out of a horror movie. Decapitated heads reanimating themselves and then regrowing their bodies, but that is exactly what some species of nudibranchs are capable of doing.

In the research piece, published in Current Biology, the heads regrew their bodies – including the heart – in just two to three weeks. And incredibly, the headless bodies are also able to survive for a few months until the flesh begins to decompose.

A team at Nara Women's University in Japan were raising a species of sacoglossan sea slug (Elysia cf. marginata) to study the slug's photosynthetic abilities when they discovered a living, severed head in their laboratory.

Some animals are know to autotomise – that is, shed body parts – to escape predators, but when the scientists tried pinching and poking another group of slugs to mimic a predator attack, none of the animals responded by amputating anything.

However, after extensive research, where the team observed 160 lab-raised and wild-trapped nudibranchs on a daily basis until their natural death – just under two years on average – they discovered that five of the 15 lab-raised slugs and three of the 145 wild nudis severed their own heads, while 39 wild slugs amputated smaller body parts, like the tail.

Further investigation revealed that some of the field-collected nudibranchs had internal copepods, a parasitic crustacean – and this included all 42 that had severed a body part.

Scientist Sayaka Mitoh said: “We think that at least this species of sacoglossans autotomises to remove internal parasites, which inhibit their reproduction during their lifetime.” 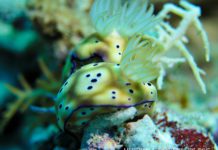