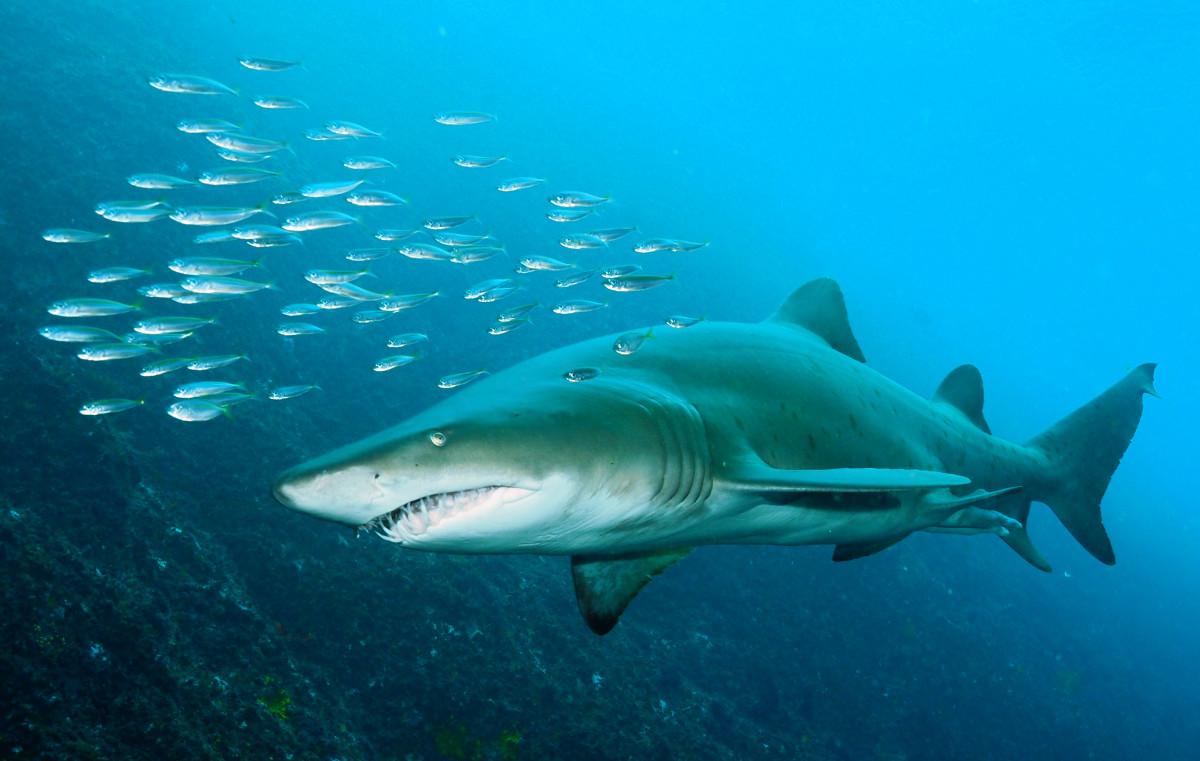 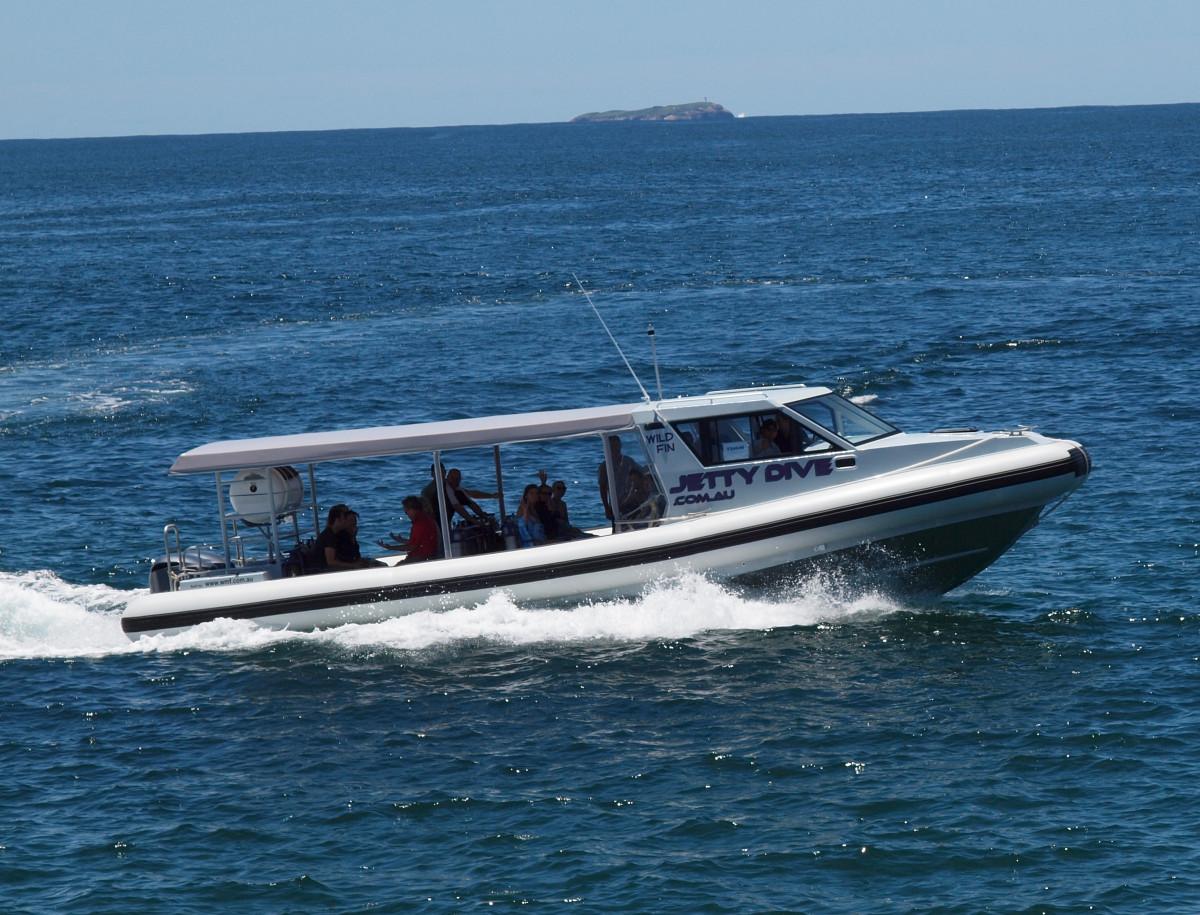 This small seaside town is just about equal distance from Sydney and Brisbane, around a 5-hour drive from either city. The town is a great base for exploring the surrounding areas numerous national parks and attractions. From the UNESCO world heritage listed Gondwana Rainforest to stunning beaches and of course the Iconic Big Banana fun park.

The reason for my stay, however, was not to gaze in awe at a Big Banana, or take a stroll along one of the many pristine beaches, or even to enjoy the humid tranquillity of a rainforest, the reason for my visit was to dive at South Solitary Island. 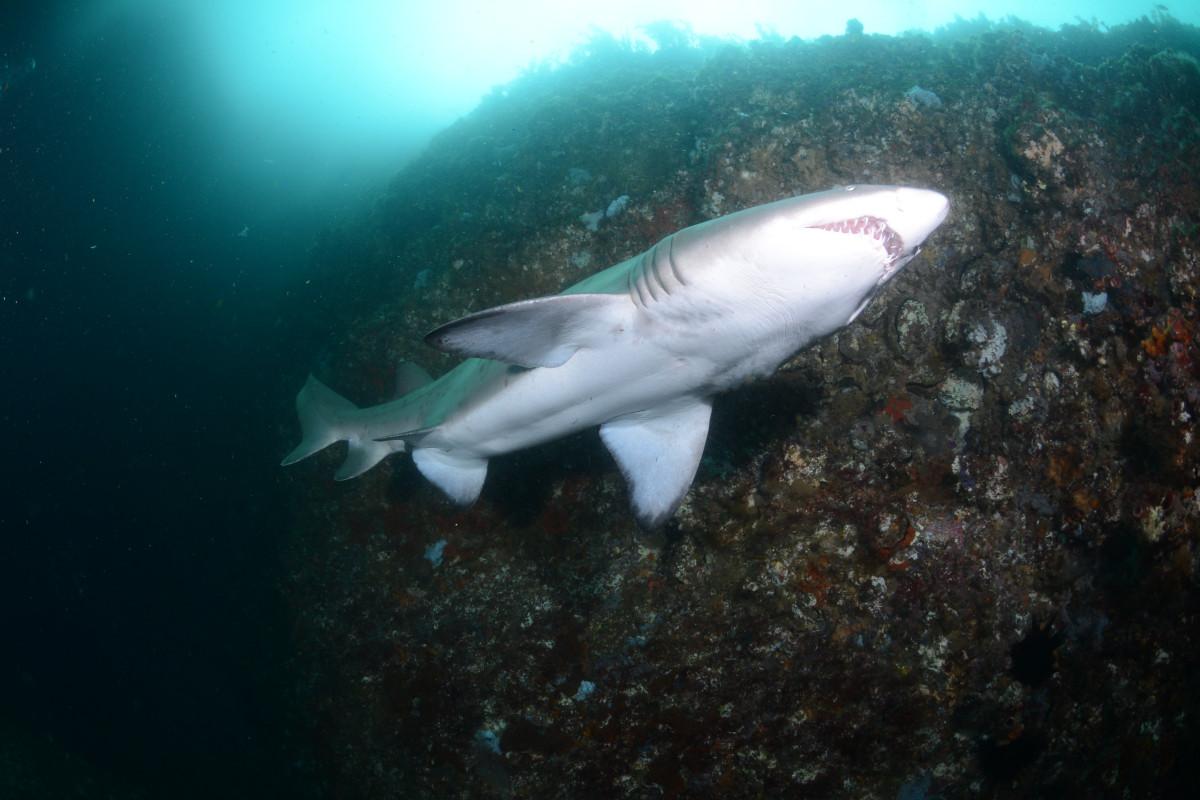 The Solitary Island marine park stretches along the coast for almost 90 km from Mutton Bird Island at Coffs Harbour up to Plover Island near the Sandon River. The Marie reserve covers an area of 72,000 hectares and is home to 858 species of fish and 90 species of coral.

Most importantly the area offers protection to the endangered Grey Nurse sharks. Once hunted relentlessly, mainly because of their fearsome looks and the perception that they were man-eaters, the Grey Nurse Shark seems to be making a comeback. These amazing creatures can now be found throughout the park. They used to only venture into these waters in the winter when the water is a lot cooler, but recently they have taken up permanent residence at South Solitary Island, with their numbers swelling dramatically during the winter. 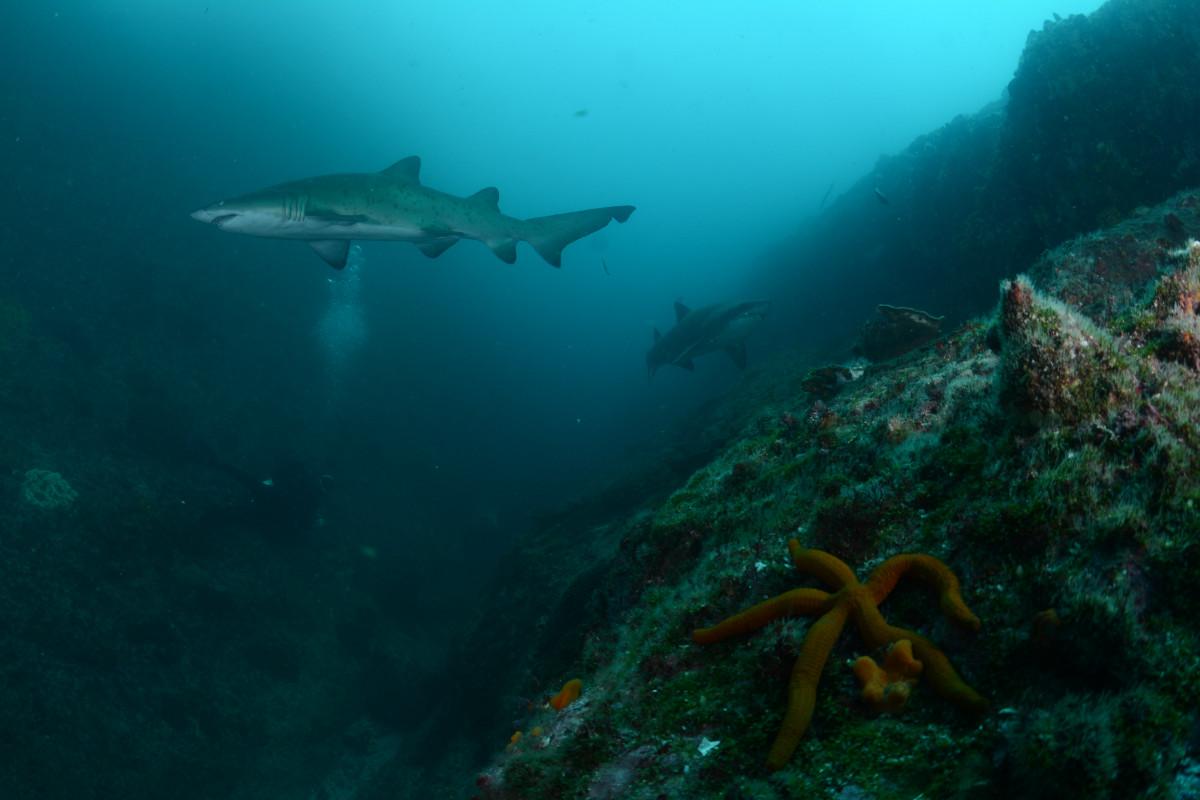 The Solitary Island Marine Park is uniquely situated, it is where the tropical waters of the North collide with the temperate waters of the South to create an unusual and interesting mixture of aquatic creatures, plants and corals. The different seasons offer different diving experiences, each with its own merits. In the summer months, November to April, the waters are warmed by the East Australian Current, temperatures can reach up to 26C and a variety of tropical fish ride the current to the South Solitary Islands.

The summer months also attract the larger fish, crowd-pleasers like Manta Rays and Leopard sharks. In the winter, May to October the warmer waters from the North are replaced but the cooler influence of the Southern Ocean and the temperature can drop to a bracing 18C. These cooler waters are favoured by the hypnotic giant cuttlefish and attract an influx of the buck-toothed Grey Reef sharks. 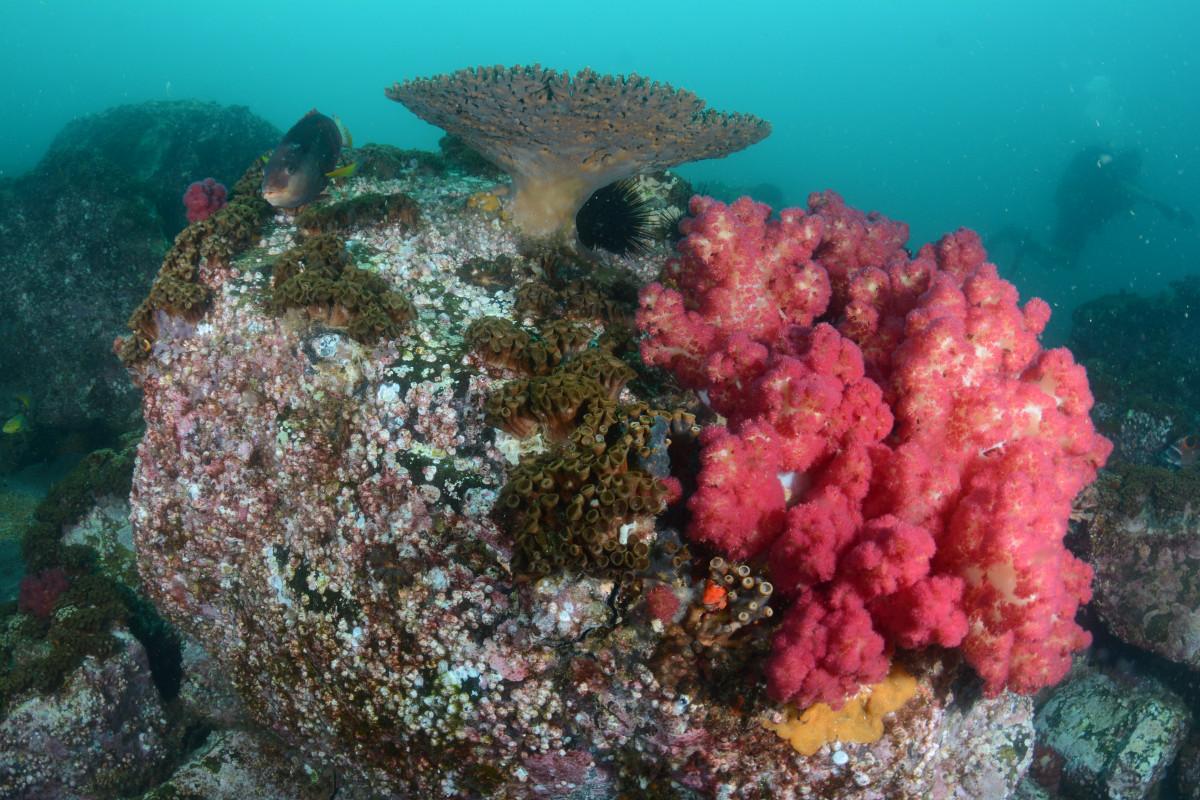 Between April and November, humpback whales make their annual migration from the frigid feeding grounds near Antarctica to the warmer waters of the pacific to mate and the coastline comes alive with their acrobatic displays. The majority of these immense creatures travel up the coast between June and August and then back down again between September and November.

South Solitary Island itself looks windswept and inhospitable. The only designable features are the now unmanned lighthouse and several outbuilding. This Barren outpost looks like an unforgiving place to live and it seemed intent on making life as difficult as possible for its former inhabitants. With no easy or safe place to moor a boat, a gantry was built and cranes were used to unload supplies and building materials. 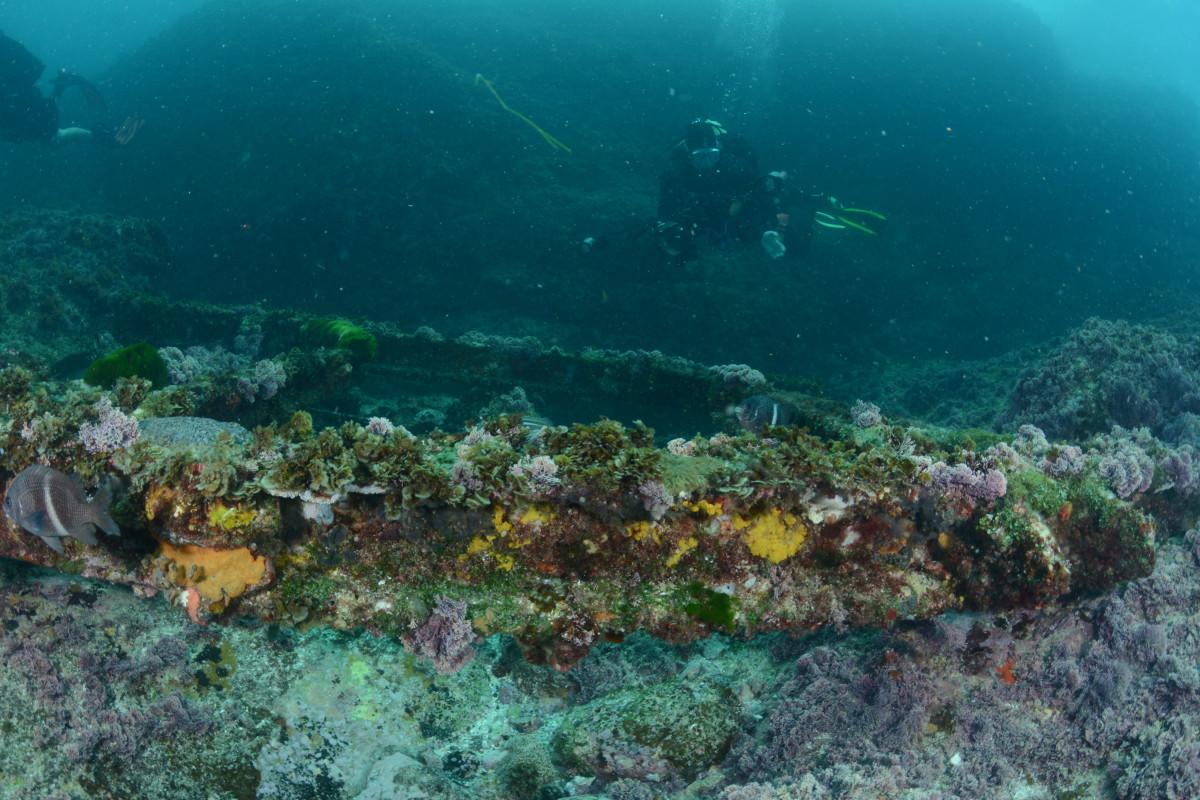 The harsh conditions destroyed the first two gantries and the third one in now slowly succumbing to the elements. A good chunk of it is now laying at the bottom of the ocean, creating an underwater playground for the myriad of creatures that inhabit the reef and a great place for corals to anchor.

My first dive was at a site called Manta Arch, as the name suggests this is a place where Mantas are often sighted and in the right season Grey nurse shark congregate in large numbers, Unfortunately, this was not the right season for large numbers of Grey Nurse Sharks and the Mantas were elegantly swooping around some other rock formation, away from interfering divers. However, a large school of tropical fish swirled around this rocky structure creating a pleasant introduction to the dive and giving us a taste of what was to come. 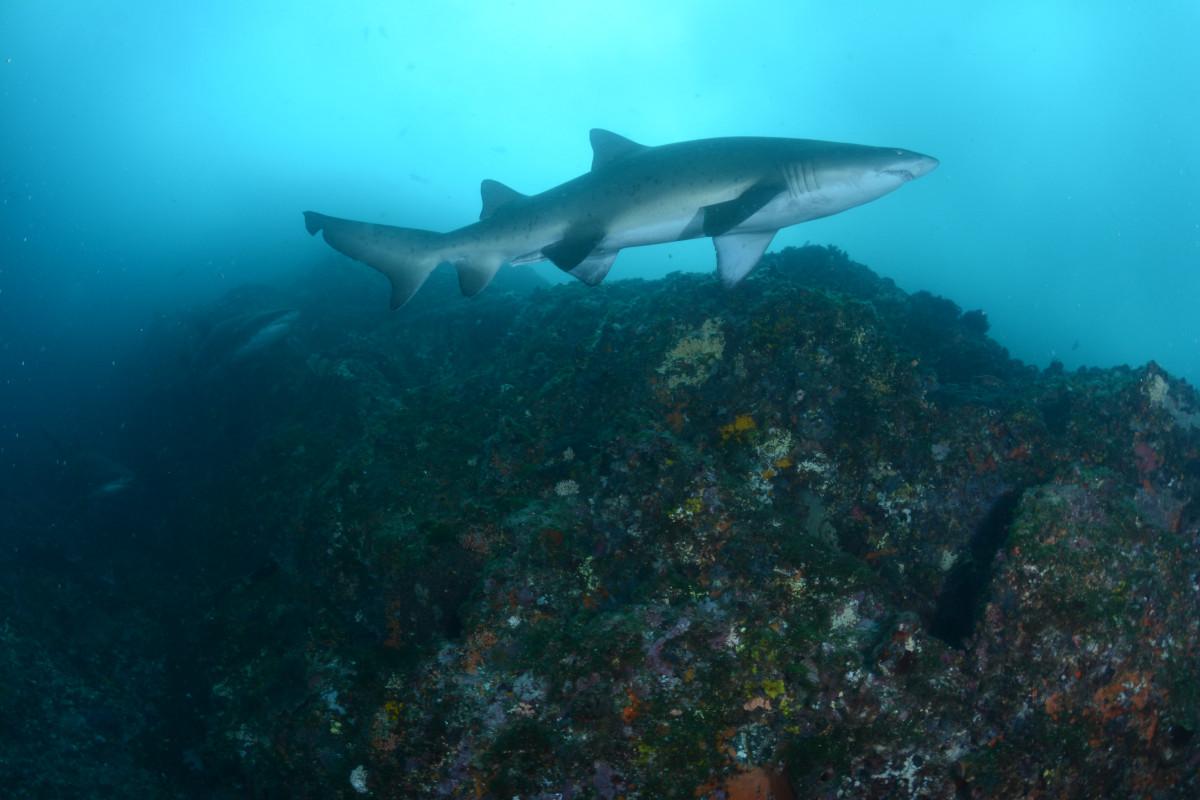 After the arch, we made our way over sheer ridges and across a boulder-strewn plain, which was littered with Wobbegong sharks, to the murky gutters that the resident Grey Nurse sharks like to congregate in. As we swam deeper into the gutter, along the steep walls of this imposing ravine more and more of these elegant, toothy creatures casually swam past us, with perhaps up to 20 sharks meandering out of this single gutter, not a bad number of sharks be greeted by considering this is low season for them!

After hanging around with the Grey Nurse sharks for as long as possible, it was time to make our way back to the boat which had moored up on the other side of the island. Our route took us around the northern tip of South Solitary Island, through a jagged valley encrusted with hard coral and yet more Wobbegong sharks and onto a shallow plateau, here we found several turtles grazing lazily on the algae-covered rocks and schools of surgeonfish frenziedly darting from boulder to boulder in search of food. 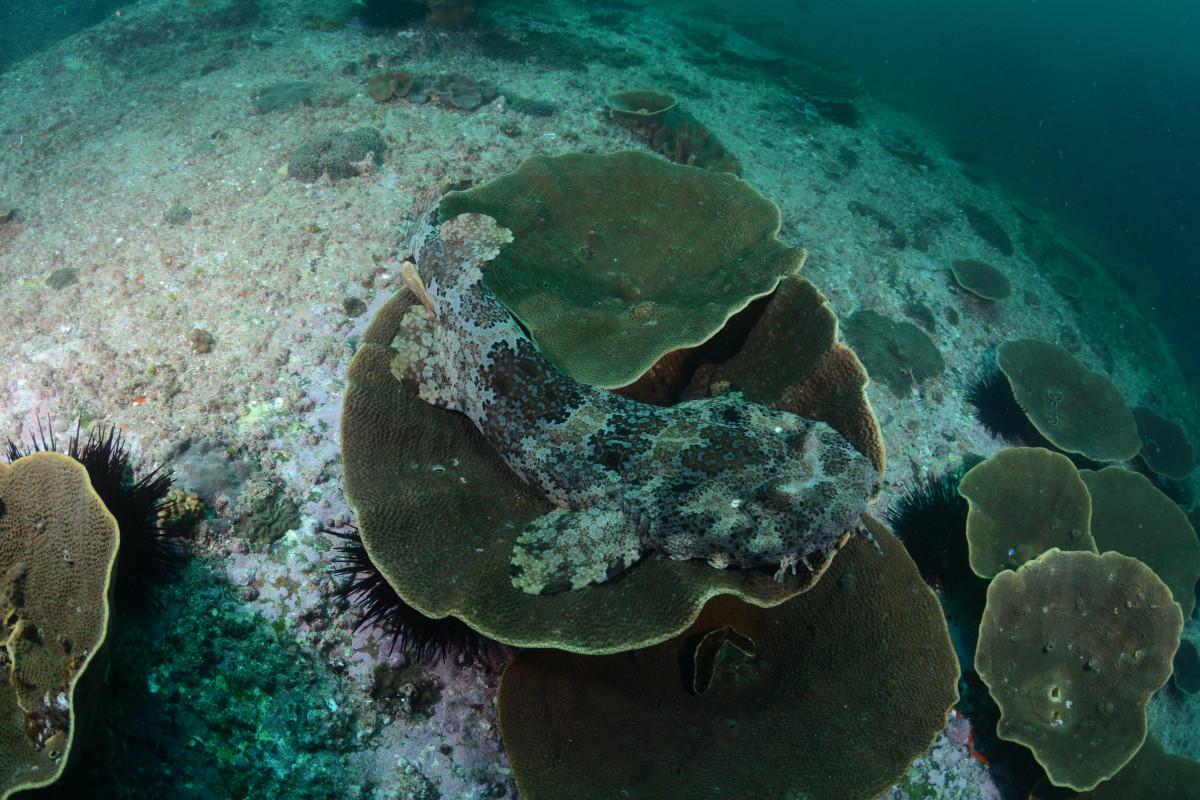 The second dive was a gentle drift that began at shark gutters and finished at The Gantry. For this dive, we were treated to an ever-changing topography and an interesting mixture of marine life and corals. We began by exploring the shark gutters where we came across one or two solitary Grey Nurse sharks and a curious number of nudibranchs. The underwater landscape was a latticework of deep ravines, sheer walls and swim-throughs, inhabited by swarms of cave sweepers and patrolled by the occasional large cod.

Once we had finished exploring the shark gutters we venture further along the dive site and the reefs cape changed to a plateau of hard coral and boulders covered in soft corals. There was the usual smattering of Wobbegongs, numerous turtles and a great variety of schooling fish, blue tangs, bannerfish and snappers to name a few. 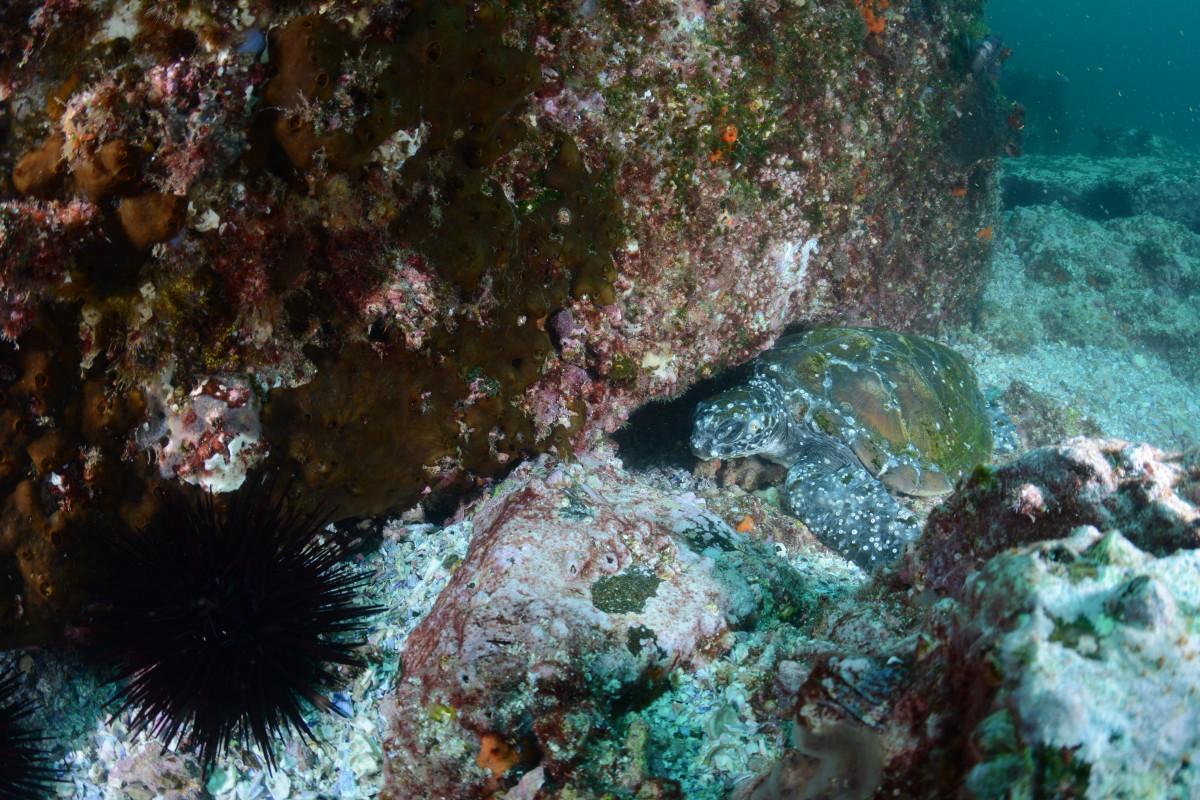 As we slowly glided along Boulder Wall there was a proliferation of anemones before evidence of the gantry that had once served the island came into view, this metal structure that had fallen into the ocean decades ago has now become a home for a variety of creatures and is encrusted in corals. With some of the wreckage at a depth of only 10-12 meters, it was a great place to finish the dive hunting for small critters.

For my South Solitary Islands experience, I was diving with Jetty Dive, a 5 Star PADI IDC centre run by Mike and Debbie. The dive centre comes with all of the amenities you would expect and has a very well stocked shop should you wish to purchase any dive gear. This is an efficient friendly and well-run dive centre. 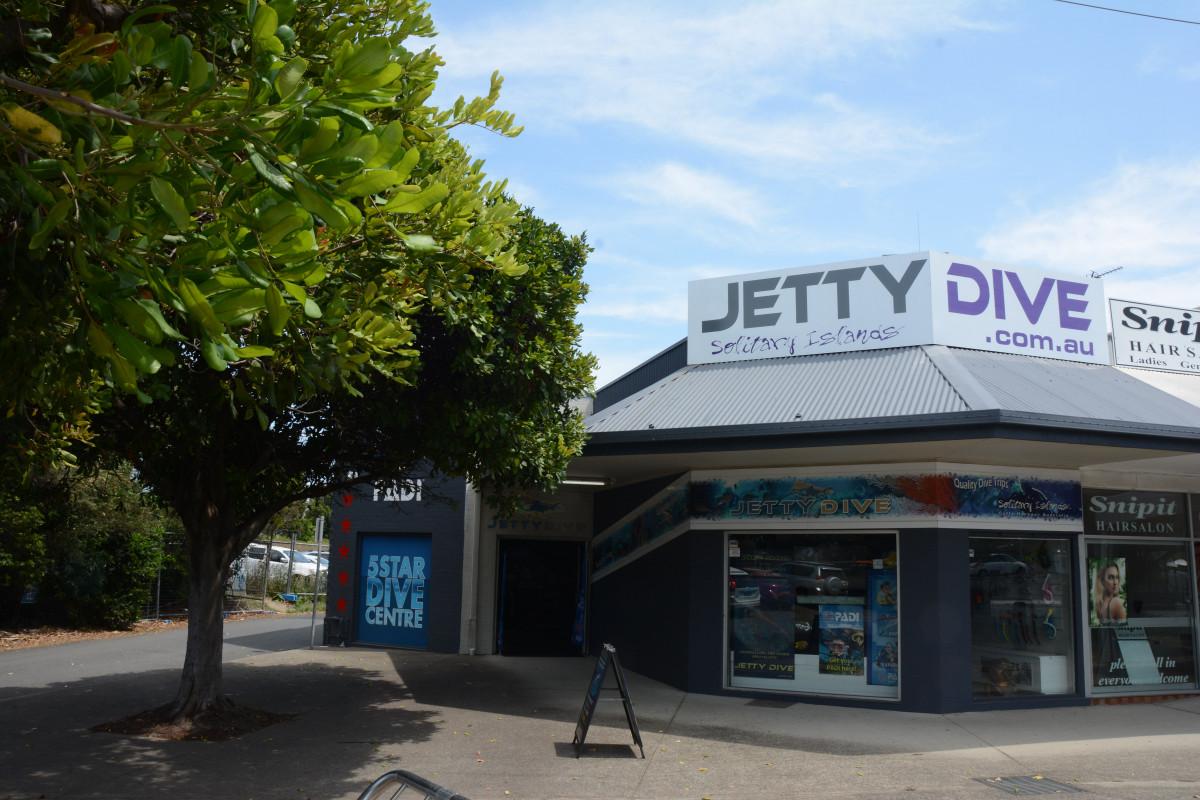 We were not hanging around for half the morning while people were kitted up, once the formalities were completed we were quickly on our way and the whole day ran very smoothly.  The dive centre is only a couple of minutes from the marina where the boat departs from, it is about a 30-minute motor out to the island. The boat itself, one of two that jetty dive run, is a large, well laid out and comfortable rib. All in all its was a pleasure to dive with Jetty Dive.

Unfortunately, I only had two dives at South Solitary Island, over the course of those dives I was treated to interesting topography, health coral growth and I saw over 20 Grey Nurse sharks, untold Wobbegongs, turtles, huge schools of fish, numerous rays and plenty of nudibranchs. In my book, this is a pretty impressive shopping list of creatures. The more I dive in the temperate/subtropical waters of Australia the more of a fan I become and South Solitary Island is certainly a great place to experience some of the best diving in the area.