Bali vs Lombok Diving Which Island Would You Prefer 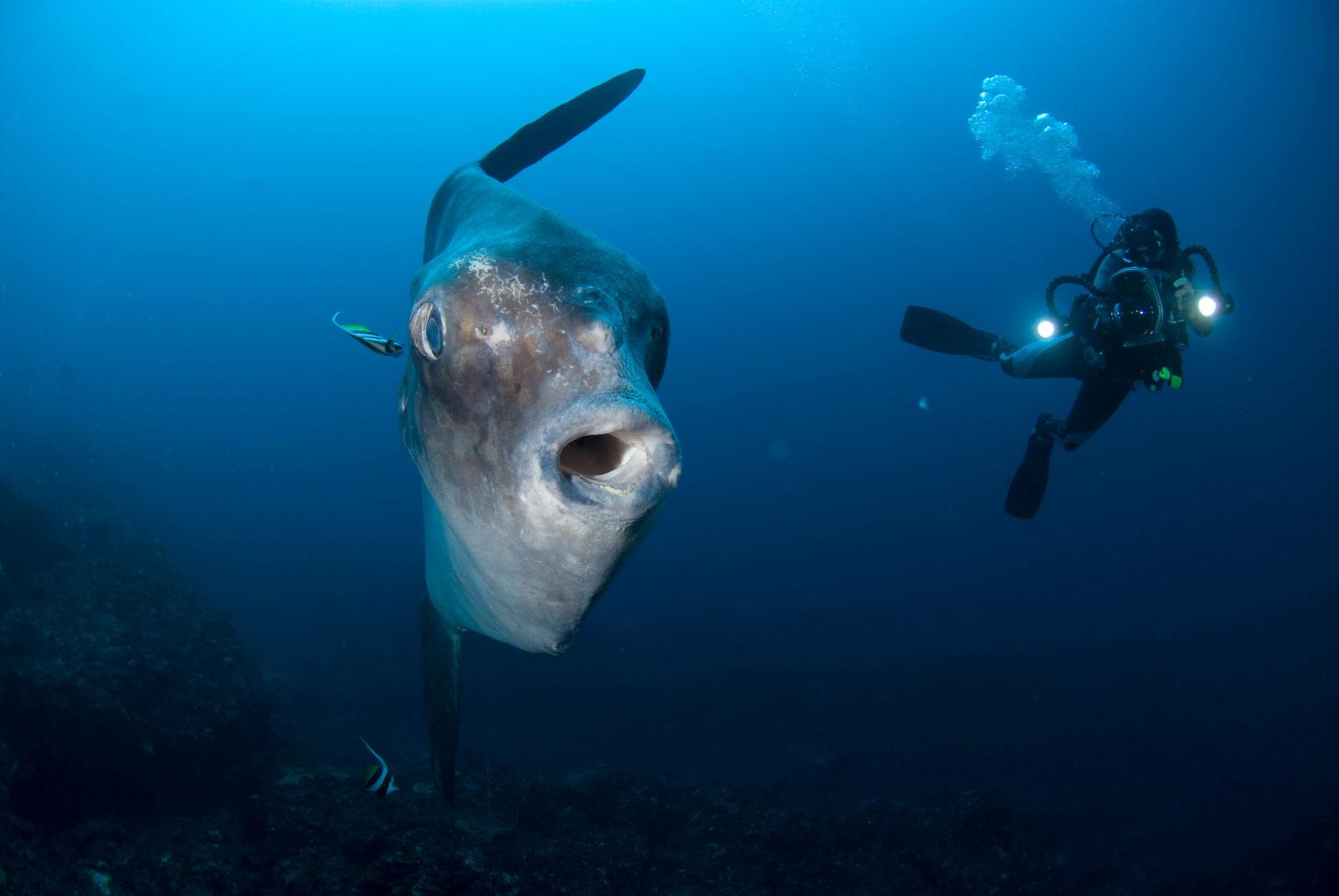 Indonesia is the largest archipelago in the world, home to a staggering 17,508 islands. A handful of these islands have become stand-out favourites, known the world over as must-visit destinations – and for good reason. But there are also others that fly under the radar for most visitors, who might be unaware of their potential for adventure.

The neighbouring islands of Bali and Lombok are classic examples. Bali is Indonesia’s tourism capital, renowned for sublime, picture-perfect scenery and action-packed excursions. Lombok on the other hand is a quiet, more reserved destination that has, until recently, remained in the shadow of its more popular neighbour. Yet both islands offer some truly incredible diving and while scuba diving has become part of Bali’s identity, many of Lombok’s dive sites remain relatively under-explored. 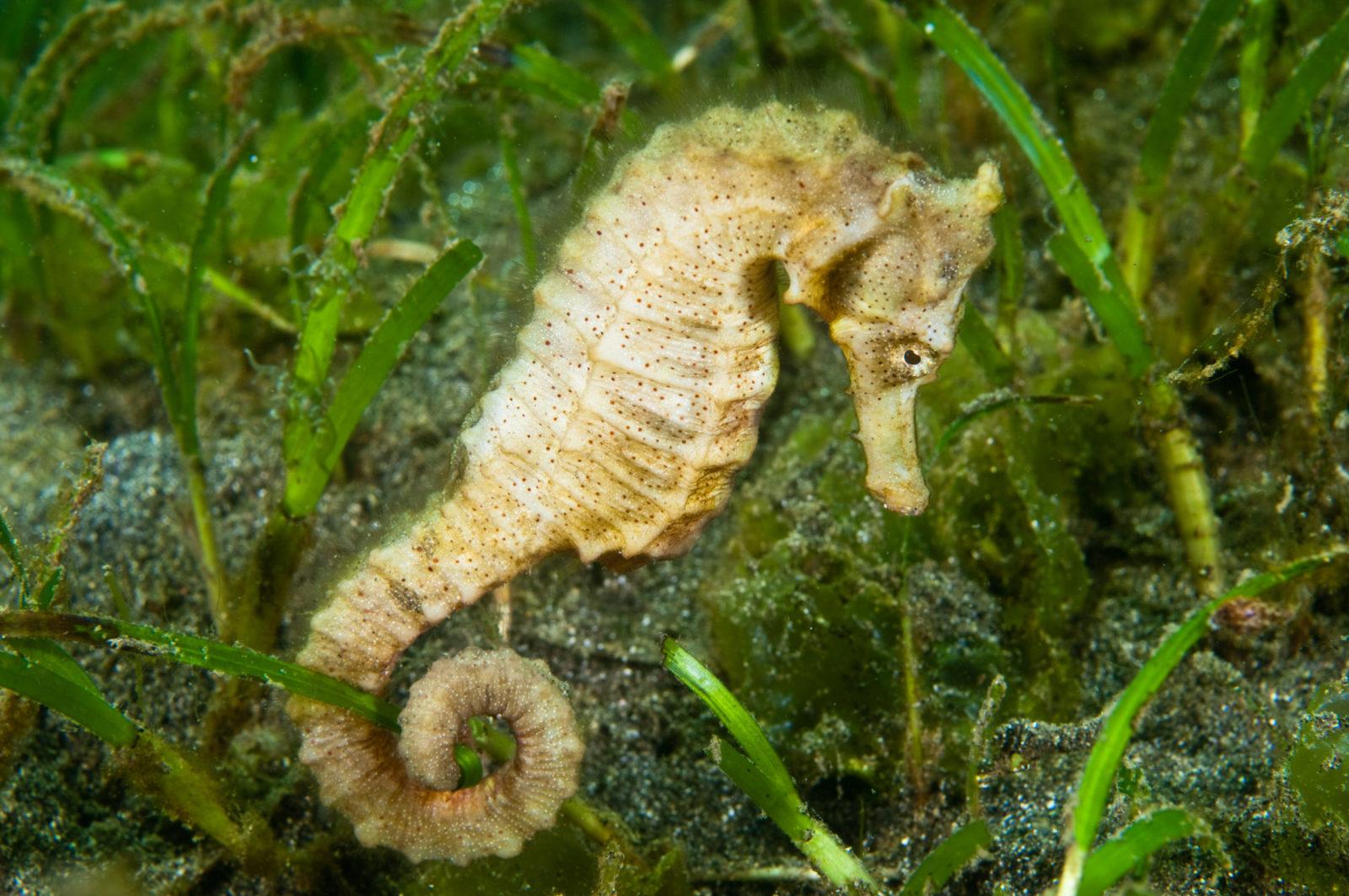 Like much of Indonesia, Bali and Lombok together deliver an exceptional diversity of dive experiences, from wrecks and reefs, to muck and more. Both islands tend to feature calm, laid-back coral reef diving in the north and pelagic-packed encounters in the south, allowing every diver to get their fix.

Bali’s southern coast lies exposed to the swell of the Indian Ocean, and has become revered by surfers for its year-round curls which roll in from the south – as well as tourists looking for beaches and parties of course. Unfortunately, while this wave energy is great for surfers, it’s less than ideal for coral growth, so the reefs along this coast are less developed. And yet many divers are also drawn south – in particular to the legendary Nusa Islands – by the thrill of rip-roaring currents and encounters with big fish, including manta rays, sharks and mola mola.

Bali’s northern coast is sheltered from these waves and corals are free to flourish in the calmer conditions – meaning divers can expect vibrant reefs packed with life, and an all-round more relaxing experience. It's no surprise that Bali’s best reefs, including the coral gardens of Pemuteran and Menjangan Island in the northwest and Tulamben’s Liberty Wreck in the east, are located along this sheltered coastline.

Interestingly, this north and south divide is obvious on the Nusa Islands themselves. Along the north divers can explore coral gardens that flourish in the currents along the coast, while the pelagic playgrounds are towards the south – making the Nusas a fantastic all-round dive destination.

Lombok’s most famous diving is arguably located in the northwest, around the renowned ‘Gili Islands’ – Gili Air, Gili Meno and Gili Trawangan. The diving around these northern Gili Islands, is characterised by gentle conditions and laid-back drifts with a focus on the small and colourful – the ultimate place to learn to dive. Much like in Bali, if you head to the south coast of Lombok the diving tells a very different story. The exposed conditions of Belongas Bay rival that of Nusa Penida, boasting adrenaline-fuelled currents packed swirling barracuda, swooping rays, and even the chance of hammerheads. Not bad for one of Indonesia’s lesser-known dive destinations.

Bali has earned a reputation as an island with a little of everything. And thankfully, muck diving is no exception. Puri Jati and Secret Bay in the north and northwest are both fantastic muck sites in their own right, along with Seraya Secrets on the eastern coast. More recently, Padangbai has become a firm favourite among macro-enthusiasts. Here, the rubble-covered slopes beneath a disused jetty play host to a variety of miniature heavy-hitters including pygmy seahorses, ornate ghost pipefish, and the ever-elusive wunderpus. Plus, it’s easily one of the best sites in Bali to find Rhinopias!

For muck divers, Lombok’s northwest coast hides a few gems – dive sites that hold their own amongst some of Indonesia’s best. Kecinan Bay has an expansive sandy bottom peppered with patches of algae, providing cover for leaf scorpionfish and nudibranchs. Often referred to as Seahorse Bay – for obvious reasons – neighbouring Mentigi Bay is also home to frogfish, ribbon eels, ghost pipefish, and bobtail squid. Finally, sharp-eyed visitors to Teluk Nara’s fantastic jetty dive can find anything from painted frogfish and waspfish to mimic, coconut, and blue-ringed octopuses – not to mention lots of interesting juvenile reef fish.

Located on Bali’s northeast coast, Tulamben’s diving revolves around one of Southeast Asia’s most stunning shipwrecks. The 100m Liberty Wreck sits just a few fin-kicks from the beach and is decorated from bow to stern in beautiful soft corals and sponges. And with a minimum depth of just 5m, this superb wreck provides beginner divers with a truly spectacular introduction to the underwater world. But there’s tons to excite advanced divers as well, with deeper areas to explore and plenty of opportunity for penetration. Other noteworthy wrecks include the recently-sunk Boga Wreck in Kubu, as well as the shallow Japanese Wreck in Amed.

Located on the edge of the Lombok Strait between the mainland and the tiny island of Gili Air, the Japanese Wreck is an old WWII vessel covered in hard and soft corals. Sitting in perfect isolation in a desert of sand, this 20m patrol boat is a sight to behold. Lying at 45m depth this wreck is strictly for advanced recreational divers and burgeoning tec divers. For less experienced divers, the current-swept Glenn Nusa Wreck and the slightly shallower Bounty Wreck both offer easier introductions to wreck diving.

Nusa Penida, Nusa Lembongan and Nusa Ceningan – known as ‘the Nusas’ – are Bali’s three main offshore islands. Although well developed with a thriving tourism industry, these islands still hold on to much of their authentic charm, providing a pleasant respite from some of Bali’s busier towns. Sitting deep within the Lombok Strait, the diving around Nusa Penida and Lembongan features plenty of cold currents and drifts, packed with pelagic species, creating unbeatable experiences for adventurous divers. Seasonal mola mola sightings are one of the highlights, while tuna, Spanish mackerel and reef sharks all add to the excitement. And, to top it off, Nusa Penida is one of the best places to dive with manta rays in Asia.

Lombok’s offshore islands are known as Gilis – meaning ‘small island’ in Sasak – and are far smaller than Bali’s Nusa Penida. The popular northern Gili Islands offer a lively island-life atmosphere with easy-going diving and an abundance of green and hawksbill turtles. Water temperatures sit in the high 20s year-round, and you’ll have access to over 25 dive sites within 30 minutes of your resort. In contrast, the lesser-known southern Gilis, located in Sekotong, deliver a genuine sense of isolation, picturesque beaches, calm dive conditions, and unspoiled fringing reefs. Due to their remote location, it’s highly likely you’ll be the only group in the water, adding to the peace and tranquility. 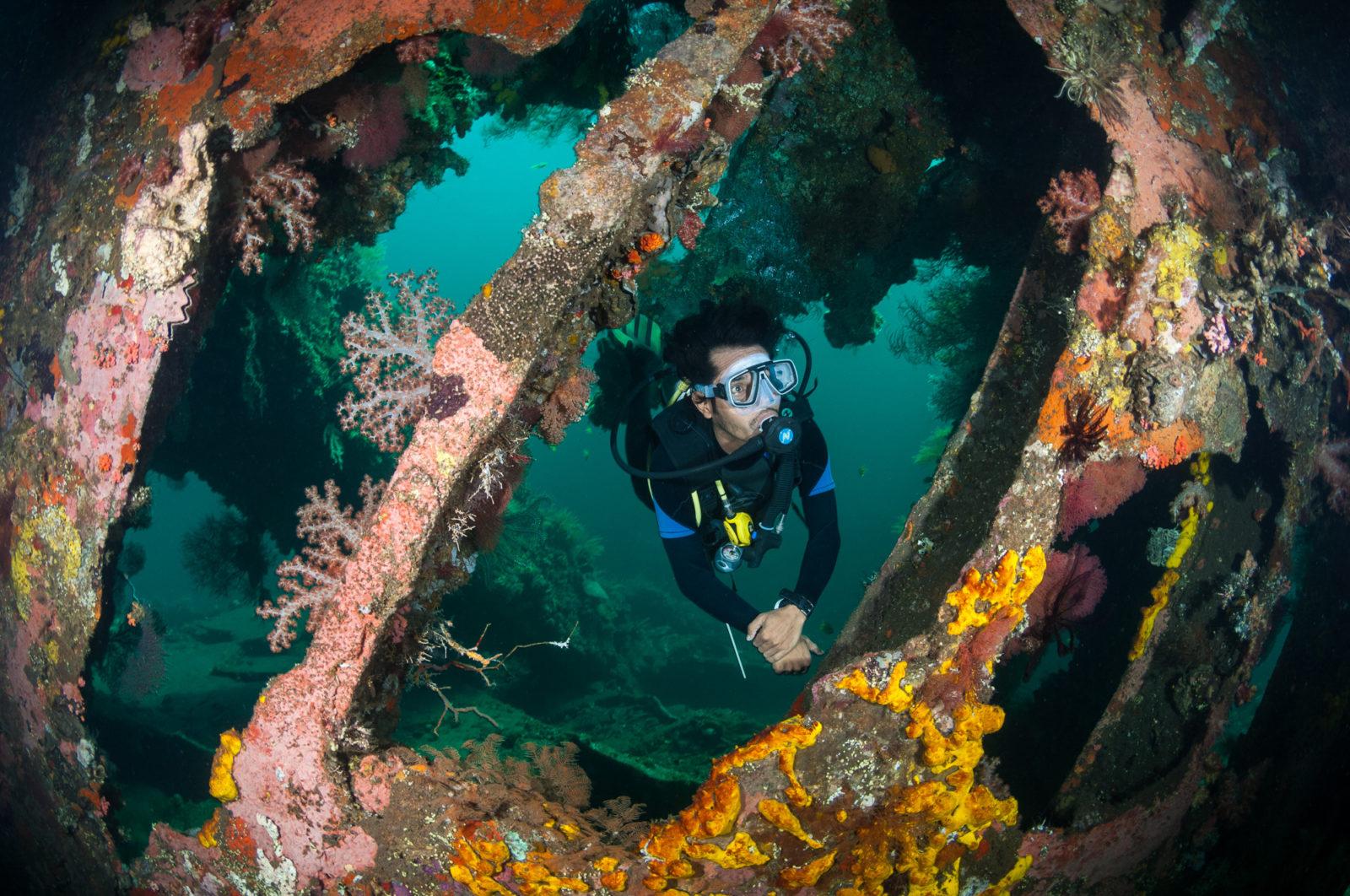 Almost 90% of Indonesians follow Islam, making it the largest Muslim nation in the world. That said, the majority of Balinese people actually practice a form of Hinduism – known as Agama Hindu Dharma – with Buddhist, Muslim, and Christian minorities adding to a rich and vibrant culture. Frequently referred to as the ‘Island of the Gods’, Bali is awash with temples, and visitors will regularly find themselves tip-toeing between painstakingly-prepared offerings placed on the pavement. And remember, while shorts and bikinis are acceptable, particularly in the southern coastal regions, tourists should always try to cover up when travelling to more remote and traditional locations.

The largest ethnic group in Lombok are the Sasaks. Despite being Muslim, the Sasak culture features an interesting mix of Islamic and Hindu-Buddhist practices. For many visitors travelling between Bali and Lombok, one of the most noticeable differences is the call to prayer. Being a Muslim island, the call to prayer echoes out across Lombok several times a day, reminding you of their unquestionable devotion to religion. Remember to respect the Muslim culture at all times and cover-up in public, unless on a designated ‘bikini beach’.

As one of the most popular holiday destinations in Southeast Asia, Bali has a very well developed tourism industry and every visitor is well-catered for, no matter what they are looking for. Accommodation, activities and excursions to suit any budget are readily available, helping tourists create the holiday of their dreams. And for us divers, this means plenty of dive centres waiting to fulfil all of your diving desires. Head to one of Bali’s scuba hotspots and you’ll find dive shops flying the flags of all the top certification agencies, including PADI, SSI, CMAS, TDI, and more. Comforting stuff for many divers.

Mainland Lombok, on the other hand, is only recently emerging as a travel destination of note, and has just a few isolated pockets of tourism. Senggigi is popular among backpackers and, although still a world away from Bali’s energetic namesake, Kuta Lombok has become a trendy surfing hotspot. While these areas also offer some interesting diving, they only have a limited choice of operators – far from Bali’s thronging, dive shop-stuffed streets. The northern Gilis are an obvious exception, providing facilities and ambience to suit every visitor and dive shops on almost every corner. 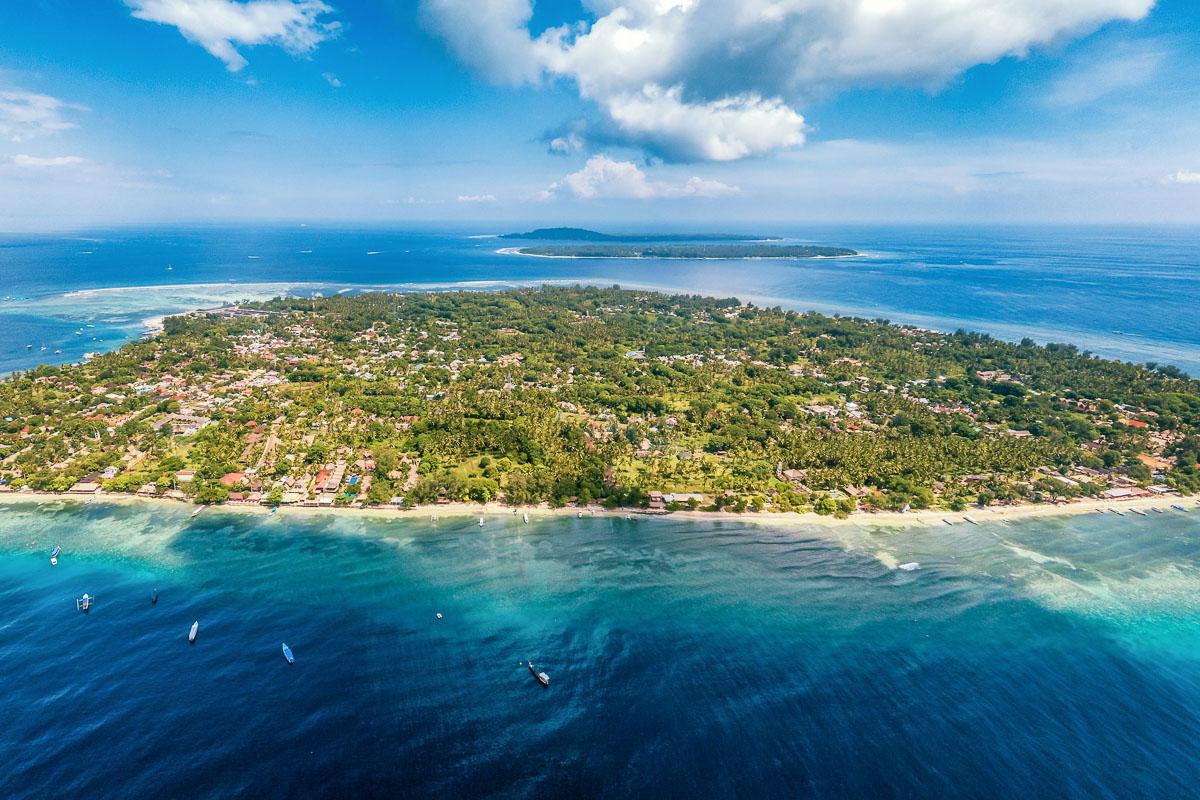 Travelling between Bali and Lombok is simple. Regular flights run from Denpasar to Lombok International Airport and are the easiest and quickest option for travellers staying in the south. Fast boats also run from Padangbai to the northern Gili Islands, before arriving in Bangsal and travelling south to Senggigi. Journeys generally take up to three hours. Slow ferries also operate from Padangbai to Lembar.