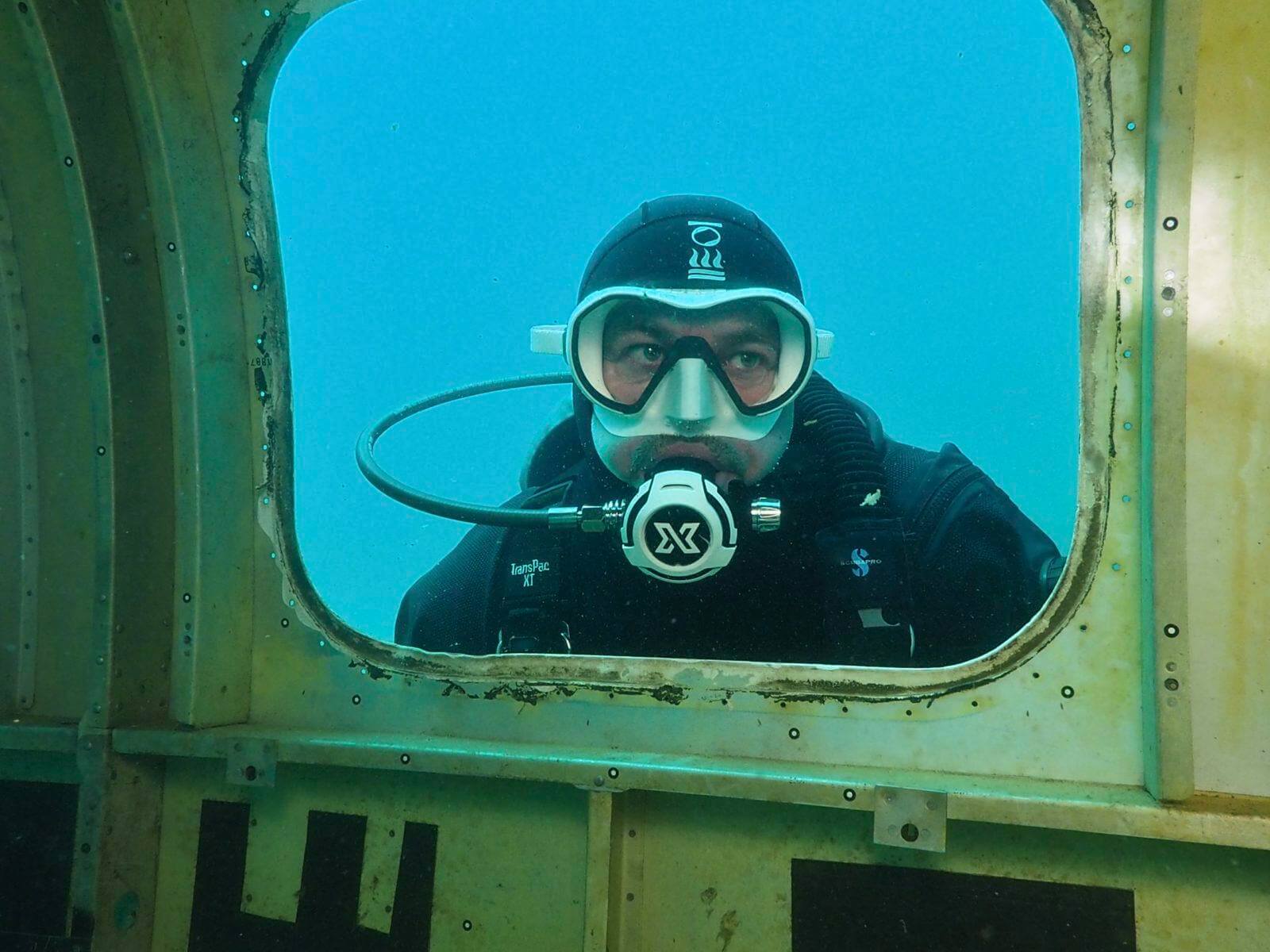 While the gas theory is still essential for advanced...

Mark Evans: Polish company xDeep has really earned itself a solid reputation for its robust, well-made and stylish backplate-and-wings, and its no-nonsense fins and mask, and its forthcoming drysuit is sure to follow this tradition. But before we get our hands on the drysuit, xDeep is releasing its long-awaited regulator, the NX700 / LS200. I first saw a prototype of this at a dive show a couple of years ago, and at the time I was struck by the design, which is unlike anything else on the market, at least when you are talking first stages in particular.

xDeep’s Piotr Czernik explained: “The goal for the design of all of our recent products was to set a completely new level of efficiency, streamlining and overall comfort of use. We hadn’t planned to launch the regulator, but over the years, we came to a conclusion that while with the NX Series BCDs we optimised the BCD design to the absolute limits, there was no regulator that could match the ‘configuration cleaness’ of our NX Series wings in terms of hose routing and efficiency.

“In 2017, we determined the perfect regulator should work great in any configuration, perform in any environment, be compact, robust, and easy to service with simple tools. The result was the xDeep NX700 / LS200.”

Fast forward to now and I got hold of one of the first xDeep NX700 / LS200 regulators out of the Italian factory. The COVID-19 pandemic caused a slight upset, as I had lots of shiny new kit sat in my office that I was unable to test-dive, but finally, as restrictions were lifted, I was able to get out and into the water with it all.

Let’s talk about that first stage. The NX700 is the definite show-stopper when it comes to this regulator. It has two high-pressure ports and five low-pressure ports. The forged body is protected by a shiny chrome finish. It is an environmentally sealed overbalanced diaphragm design, abd a heat exchanger ‘wrapped’ around the HP valve, so perfect for cold-water diving as well as warm-water adventures. So far, so normal. Where it all goes xDeep is in the design of the body.

The two high-pressure ports and two of the low-pressure ports come straight out of the main body of the first stage, as per the norm, though they are routed at quite a steep angle, which sets the hoses to perfect flow under your arms – your drysuit hose, for example, and your SPG. This reminded me of the OMS regulator from a couple of years back.

However, the NX700 then pulls its party piece. On the front of the first stage is a large circular addition, which has another three low-pressure ports. This is a unique swivel, mounted on the face of the first stage instead of on top, as with some other regulators, such as the Scubapro MK25 EVO. In another first, it can also be locked in place, or left to move freely.

xDeep recommend it be locked in place for use as a single-cylinder regulator, or for the secondary first stage on doubles. For other configurations, such as the primary first stage on twinsets, in sidemount, or on a stage, it should be unlocked. 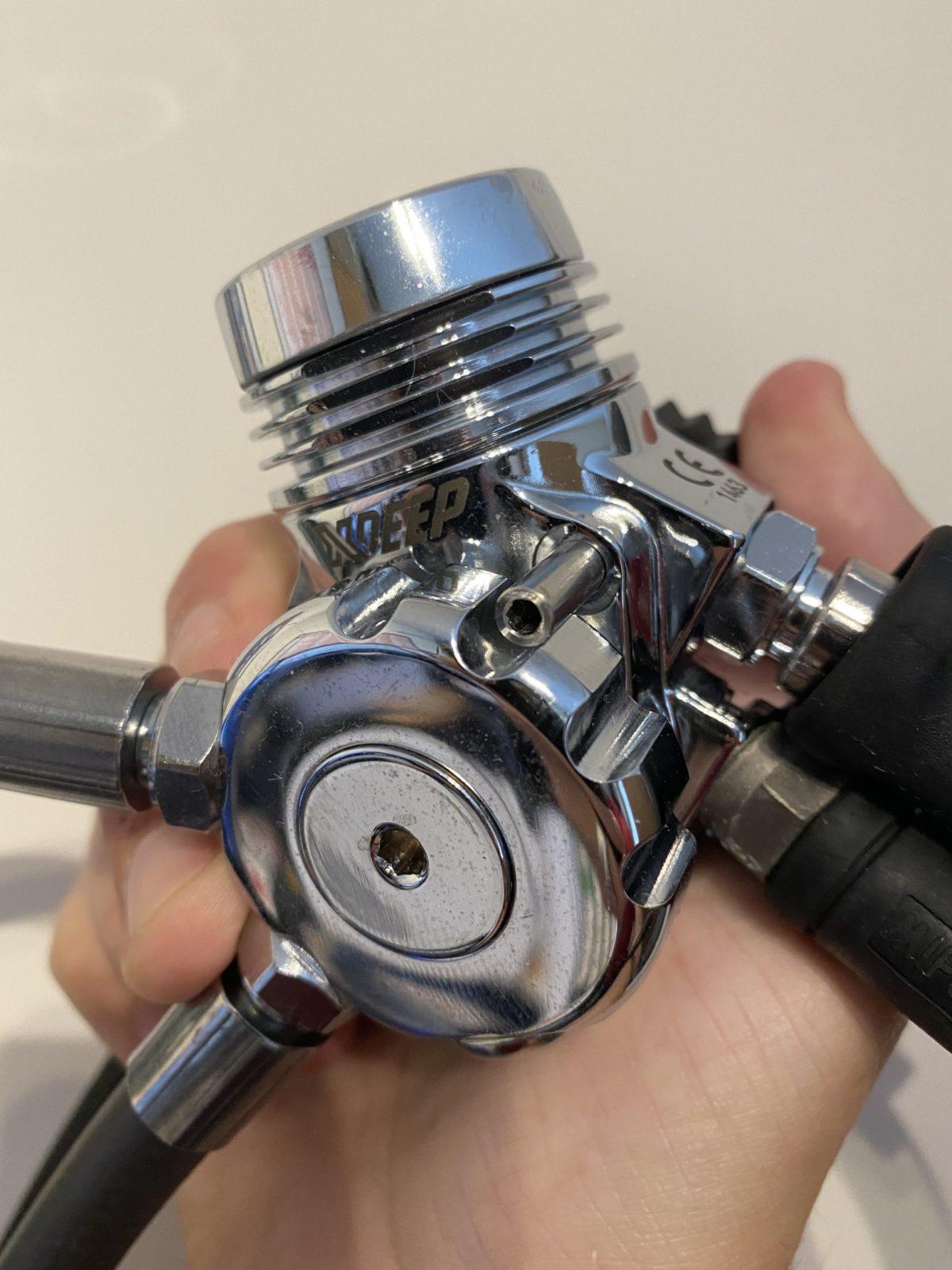 There are four grooves in the swivel, which dovetail with a small threaded pin, which has two locations to screw into the main first stage body. This offers up lots of customisation by the diver, and it is a very quick and straightforward operation to move or remove the pin.

When it comes to the pneumatically balanced LS200 second stage, things get back to a more-traditional style. There is a large circular purge button on the front, and the primary has a large venturi lever and a chunky cracking resistance control. The secondary regulator just has the purge and venturi lever. All of these controls can be easily located and operated even when wearing gloves. The mouthpiece is quite large, but comfortable, the right blend of soft and firm. Interestingly, the cover can be removed with no tools, even during the dive, to remove sediments during cave diving, for instance.

Connecting the second stages to the first stages are braided hoses which have a smooth covering.

In use, I liked the routing of the hoses from both the main first stage and the swivel. I played around with different angles for the swivel and found one that nicely brought the primary reg over my right shoulder and fed the secondary under my right arm, while keeping the ‘bunny ear’ loop of hose to a minimum.

I was expecting the xDeep regulator to be a decent performer, given the quality of all of their past products, and I was not disappointed. It provided a smooth and dry breath in all positions, and was not found wanting even when I upped my breathing rate considerably – it just kept delivering all of the gas I needed for minimal effort. The venturi and cracking resistance controls did make a difference to the breathe, and I had no problems using them even wearing thick neoprene gloves.

You can buy the xDeep regulators are single stand-alone first and second stages, as a single-tank set, and as a set for doubles.