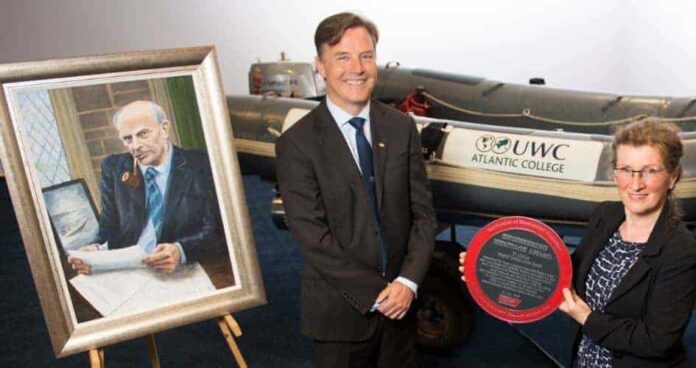 The rigid hull inflatable boat (RIB) – developed in the 1960s by Rear-Admiral Desmond Hoare, the founding Principal of UWC Atlantic College – is the world’s most-widely used craft for inshore rescue, and it has now been awarded the Institution of Mechanical Engineers’ prestigious Engineering Heritage Award.

The Awards recognise irreplaceable artefacts to celebrate and raise public awareness for the vital role mechanical engineering plays in modern life. World-famous engineering projects like the Concorde, Alan Turing’s cipher decoder, the Channel Tunnel, London’s Tower Bridge, and the Jaguar E-Type are some of the icons that have also been recognised.

Initially conceived by the College’s first Principal, Rear-Admiral Desmond Hoare, the early RIB X craft were built and test-driven along the dramatic Bristol Channel coastline by Atlantic College students. Now known as the Atlantic Class, the design which developed from the original ‘X Alpha’ prototype revolutionised maritime rescue worldwide and became the model for RNLI inshore boats across Britain.

The patent for the RIB was created by Rear-Admiral Desmond Hoare, who donated it to the RNLI for £1 in 1973, and a copy of the still-uncashed cheque hangs in a frame on a wall at the College.

The development of the RIB commenced shortly after the College’s opening at the 12th Century St Donat's Castle, near Llantwit Major, in 1962.

A key element of the Award was the College’s work in the restoration, exhibition and use of one of the original RIBs, known by the name ‘X Alpha’, which the Institution’s Heritage Committee recognise as an important engineering artefact.

Accepting the Award on behalf of the College and the late Rear-Admiral Desmond Hoare, UWC Atlantic College Principal Peter T Howe said: “It is an honour to have the Institution of Mechanical Engineers recognise the work of our first Principal and the earliest students of our college to develop the RIB. The legacy of building, testing, and refining rescue boat design continues here to this day, as does the humanitarian spirit that saw the patent gifted to the RNLI for the saving of lives.”

Speaking at the celebration event, Carolyn Griffiths, President of The Institution of Mechanical Engineers, said: “The development of X Alpha, one of the very first RIBs, is a fantastic example of UK engineering. The impressive innovation of developing a high-performance hull, inflatable tubes, open transom and powerful engines was a step change in maritime rescue. Its pioneering success led directly to the development of RNLI Atlantic Class lifeboats and has helped save countless lives at sea. This award celebrates the amazing achievements of Rear-Admiral Desmond Hoare, the students who built and tested the boat, as well as UWC Atlantic College for maintaining this boat in such great condition.”

The Committee also praised the College’s work in continuing the legacy of the RIB to support humanitarian projects across the globe. This includes the work by college students and staff to donate boats to aid rescue efforts off the coast of the Greek island of Lesbos.

UWC Atlantic College alumni have also travelled to Lesbos to serve as volunteer boat crew with the Atlantic Pacific International Rescue Boat Project. This work sees alumni putting the lifesaving skills they have developed at the College to protect the lives of refugees who have been forced to brave the perilous Mediterranean Sea crossing.

The Institution of Mechanical Engineers was established in 1847 and has some of the world’s greatest engineers in its history books. The Institution’s President, Carolyn Griffiths, joined UWC Atlantic College staff and students at the historic castle campus to present the plaque, which will officially mark the site where the first RIB was created by Rear-Admiral Desmond Hoare and his students.