Wonders of the abyss – world’s deepest octopus caught on camera 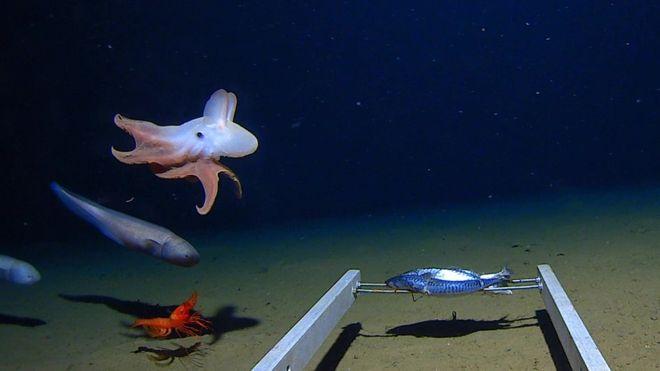 A deep-water expedition into the depths of the Java Trench in the Indian Ocean has captured footage of a so-called ‘Dumbo' octopus (because of its likeness to the Disney cartoon character) – some 2km deeper than the previous reliable recording.

The discovery, which was reported in the journal Marine Biology, was made thanks to the ingenuity of Dr Alan Jamieson, who has pioneered the exploration of deep-water sites using what are called ‘landers', instrumented frames dropped from research vessels which sink and then settle on the seabed. They then record whatever passes by.

He was working as the chief scientist on the Five Deeps Expedition – a project that saw Texan financier Victor Vescovo take a submersible to the deepest parts of the five major oceans on the planet – when he conducted the experiments.

The ‘Dumbo' octopus were seen on two separate occasions – one at 5,760m, and another at 6,957m. The previous reliable sighting was at 5,145m, in a black-and-white photography shot some 50 years ago off Barbados.