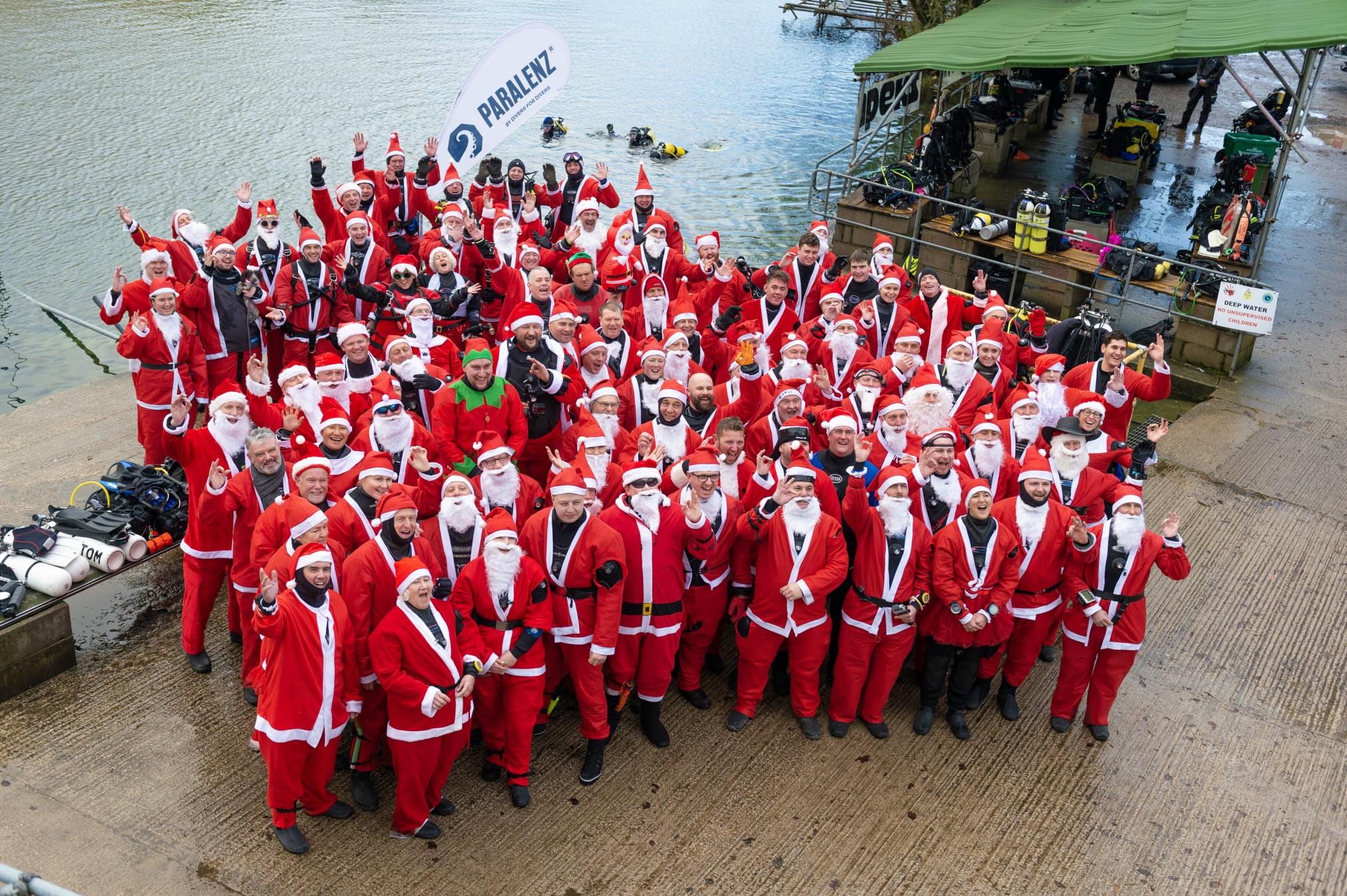 Vobster Quay’s annual charity Santa diving event continues to go from strength to strength, with this year’s event attracting more than 100 hardy scuba divers for a mass sponsored scuba dive in aid of the RNLI and the Dorset & Somerset Air Ambulance.

Update: Ho Ho Ho! Vobster Santas is back, the 2022 event will be taking place on 11 December.

Divers from across the country converged on Vobster Quay to get involved in what has become a popular final fixture in the diving calendar. Despite the often-inclement weather and the winter water temperature, there was no shortage of smiles and festive cheer as divers climbed into their red pantaloons and strapped on their fluffy beards for a dive like no other. Vobster Santas has always been a great leveller, with divers of all levels – from recently-certified Open Water divers to hardcore rebreather techies – rubbing shoulders and sharing the free mince pies in a good-natured last dive of the year.

Since the event’s inception in 2007, Vobster Santas has raised well over £40,000 for the RNLI – a charity very dear to the hearts of all divers. Once again, Santa divers were invited to seek sponsorship from friends and family for the event, which took place at Vobster Quay in Somerset on Sunday 15th December. With sponsorship money continuing to roll in, 2019’s event is look set to be another great show of support for the RNLI from the diving community, with an additional £2,000 likely to be added to the fundraising total.

The Dorset & Somerset Air Ambulance charity was well represented at the event, with local volunteers from the charity manning the collection buckets and doing their bit to spread some festive cheer. Running alongside the sponsored scuba dive, a very special raffle was laid on with prizes donated by some of the biggest names in diving, including Nautilus, BestDivers, Maxshow, KUBI DryGloves, Otter Drysuits, Kent Tooling and Fourth Element. Divers and festive swimmers alike dug deep to raise over £1,400 for this worthwhile charity.

Tim Clements from Vobster Quay said: “We are over the moon! The day was full of festive cheer with red and white fluffy outfits everywhere you looked. We are absolutely delighted that we managed to get over 100 Santa divers underwater at the same time. What a result! Vobster Santas is one of the highlights of the Vobster year – we’re thrilled that so many divers, their friends and family members have given so generously to support both the RNLI and the Dorset & Somerset Air Ambulance. Each and every year, these two charities are responsible for helping to save the lives of so many people across the country. Vobster Santas is our way of saying a massive thank you for the essential, life-saving work that they do.”