Dive into history – a visit to the Diving Museum in Gosport

While technological advances now allow divers to see and do more than ever before, we mustn’t lose sight of diving’s magnificent history. And what better place to remind ourselves of what led to our great modern sport than the Diving Museum, in Gosport, near Portsmouth. Tech diver Andrew Tonge went to take a look.

While technological advances now allow divers to see and do more than ever before, we mustn’t lose sight of diving’s magnificent history. And what better place to remind ourselves of what led to our great modern sport than the Diving Museum, in Gosport, near Portsmouth. Tech diver Andrew Tonge went to take a look.

Gosport was once home to the Royal Navy Submarine Service and can also be said to be the place where diving began. Having been through submarine escape training when I was in the navy, at what was HMS Dolphin, just down the road from the Diving Museum, I was especially excited to be back where it all began. 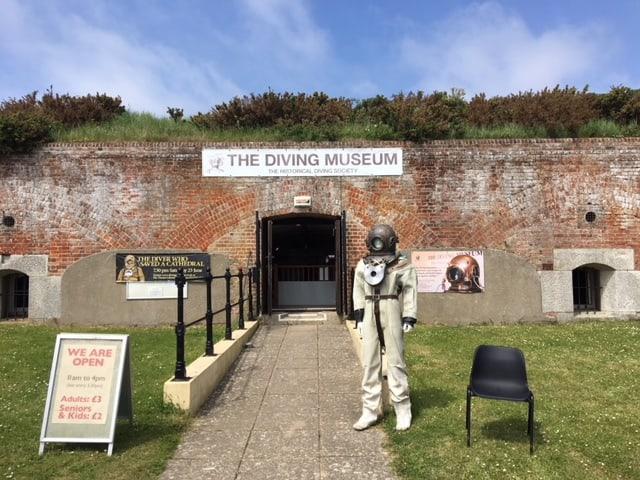 Housed in a former Victorian military battery in Stokes Bay, even the approach to the Diving Museum is steeped in history. The entrance is reached by crossing open ground which according to local legend was the site of the last fatal duel in England in 1845.
As if standing guard outside the door to the museum is a diver in admiralty pattern diving rig. Passing that point is like passing through a time portal to the past.
Owned by the Historical Diving Society, the Diving Museum, opened in 2011, houses many superb collections covering all aspects of diving – sport diving, commercial diving, scientific diving and military diving.
Straight away, from stepping through the door, the visitor is immersed in the development of diving equipment and techniques, through early cylinders and regulators, masks and helmets, diving suits and rebreathers. The museum has an air of authenticity and authority about it. I could almost feel the history as I stepped inside. 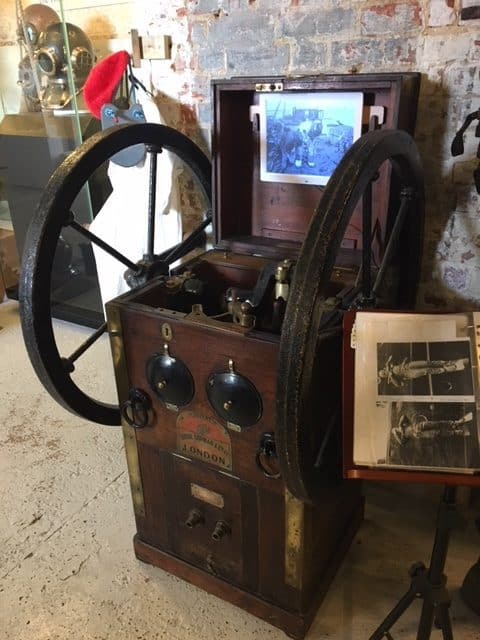 Larger than life and twice as heavy (about 12 stone, actually), in the lead boots and the brass helmet of the early days, air sent down to the suit from hand-operated surface pump, divers in suits from the turn of the previous century greeted me, rooting me the spot, a reminder of how our predecessors did things – how the underwater world is not for the faint-hearted; that its beauty is hard won, and that in the early days it yielded only to the very bravest of souls. The equipment is in excellent condition. It looks like the suits could be put immediately into use. It left me a little surprised and humbled.

The museum is laid out on one level, with every nook and cranny holding a piece of history, with stories that will make your toes curl. 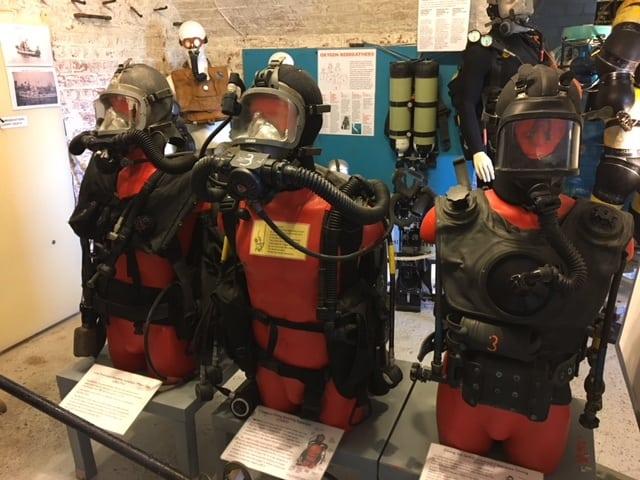 For me, one of the highlights is undoubtedly the set of three military rebreathers, including, as the piece de resistance, the DSSCCD (Diving Set Self Contained Clearance Diving), which was in use in the Royal Navy over 30 years ago. The navy has no doubt operated in the face of danger in every imaginable situation, but just to see the kit that might be put on by a diver facing the task of placing limpet mines on the hull of an enemy ship, or disposing of a mine, is awe-inspiring. I had visions of the divers in this kit in the early days of the mission to retake the Falkland Islands in 1982, preparing to swim ahead of the landing force, making safe the way to the landing grounds. 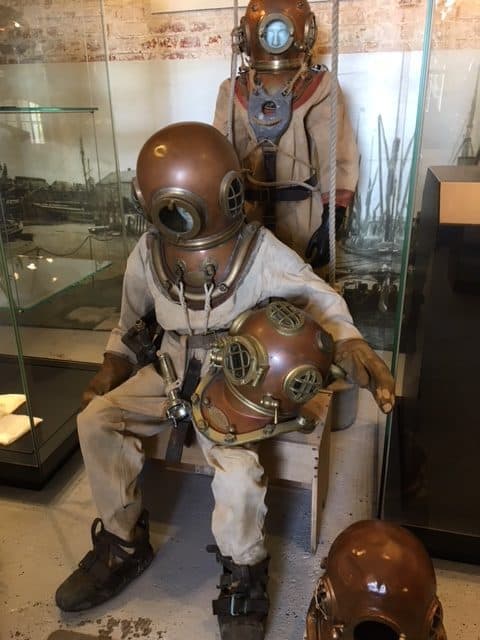 Commercial diving also features heavily in the museum. It’s fascinating to follow the progression from the earlier hard-hat diving through the modern helmet display and the range of suits and harnesses used in everything from air diving to wet bells and on to deep saturation diving, at mind-boggling depths. And standing there, silent, forbidding, so heavy that it has to be mechanically lifted into the water, is the one-atmosphere suit, into which a diver climbs, like a suit of armour, in effect a mini-submersible, complete with manoeuvring propulsion system. 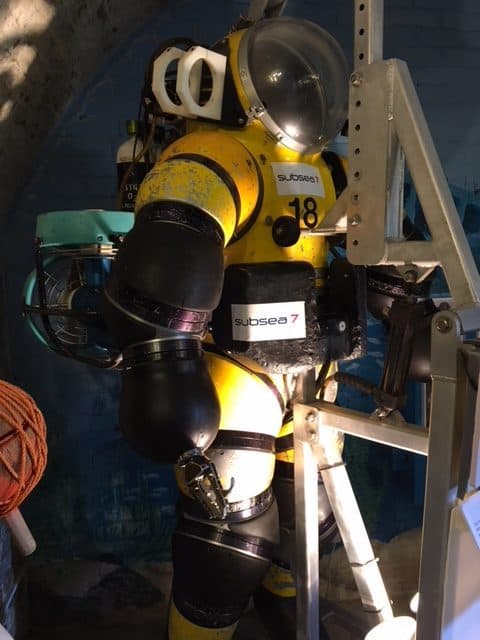 In the same room is the one-man decompression chamber. It is eye-wateringly small – certainly not for the claustrophobic! This is testament to the search for safety in diving which while being important always seemed somehow to lag behind the derring-do of those that actually got in the water. 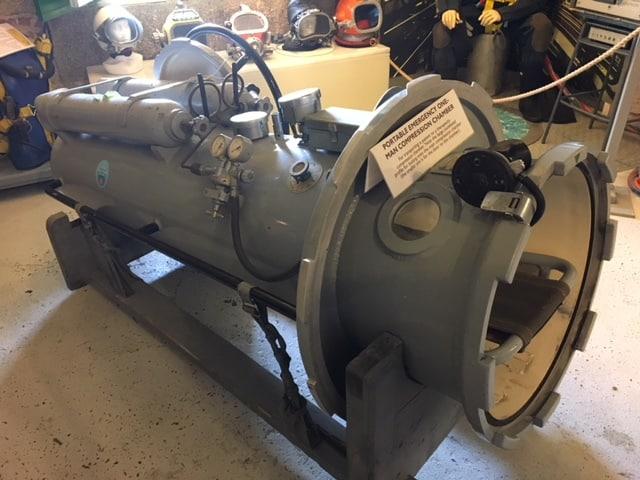 The communications devices on display range from early radio to underwater comms of the modern day. Of course, some of the pioneers of the underwater world never had the luxury of communication, but were out on a limb, risking all at the cutting edge.  It’s amazing just how much the world of diving has changed; how far it’s come from say the World War Two charioteers, riding what were really piloted torpedoes – and yes, there is a charioteer on display too! Fantastic. 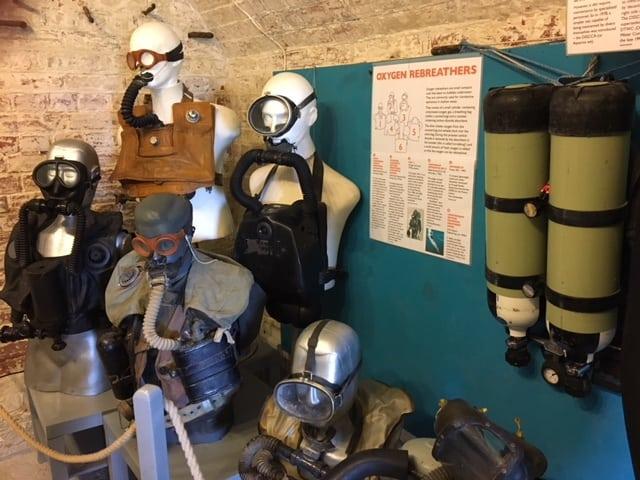 The history of sport diving is plotted through a number of displays, showing kit from the early adjustable buoyancy lifejacket used by the pioneers of the sport, to the modern BCD; from early to modern regulators, suits, fins and masks. There is no doubt that things have changed massively through the years. Of course, while technology has advanced making the sport safer, and our understanding of the science of diving and the way that gases behave has allowed us to venture deeper and deeper, the sensation of being below the waves, experiencing the underwater world as a modern human, remains the same as it did all those years ago. 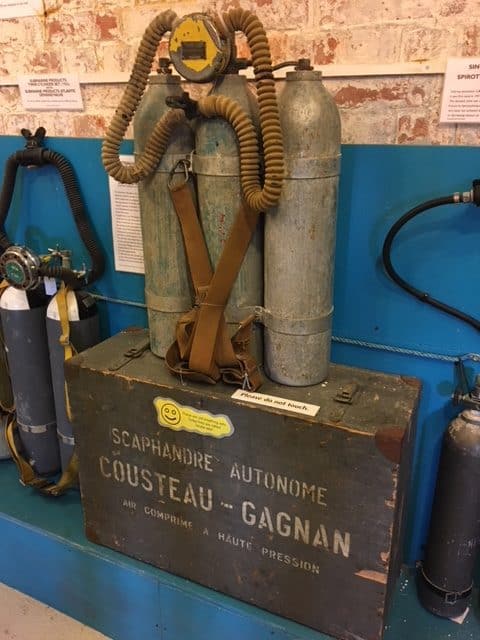 And then, as I rounded the corner, there it was. A tri-set and demand valve from the 1950s, which is described as being used by Jaques Cousteau himself, diving from his vessel Calypso, which featured on TV screens around the world, as Cousteau’s floating headquarters, from which he pursued his adventures. I wondered whether this was the tri-set that he used to dive the hospital ship Britannic, lost in the Aegean Sea in 1916. And it doesn’t end there. The set seems to taken on a life of its own, ending up in the museum via Lord Louis Mountbatten (Cousteau is said to have given the set to him) and a number of other divers along the way. 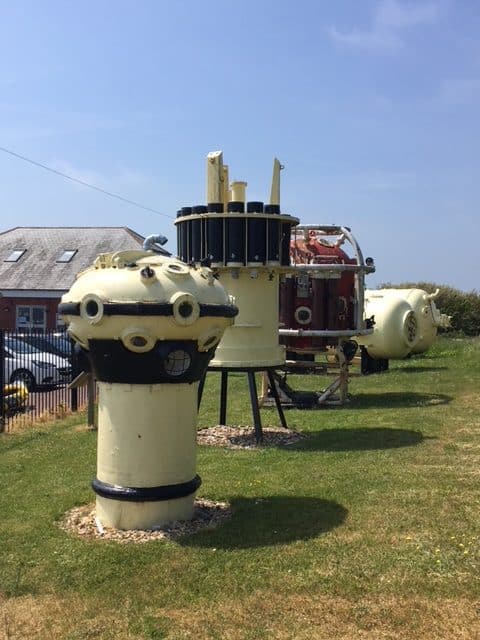 After buying an Historical Diving Society mug and cuff links – I couldn’t resist – I was then treated to a guided tour of the garden, which contains a number of bells and chambers, some of which were used in record-breaking dives by various scientists and Royal Navy divers. The chambers, from sealed capsules to open bells, to deep dry experimental chambers, all seemed to have a cold, solemn feel. To have climbed inside when those chambers were in use would have taken a great deal of courage and determination. To stand as I did, on the grass, in the sunshine, looking inside, still gave me a feeling of dread. It is a sobering thought that our predecessors in diving were willing to risk everything to venture into the unknown, with maybe just the spirt of adventure to accompany them.

And what was truly amazing was that John, the man that took me on the tour, had actually taken part in some of those early dives in those very chambers! 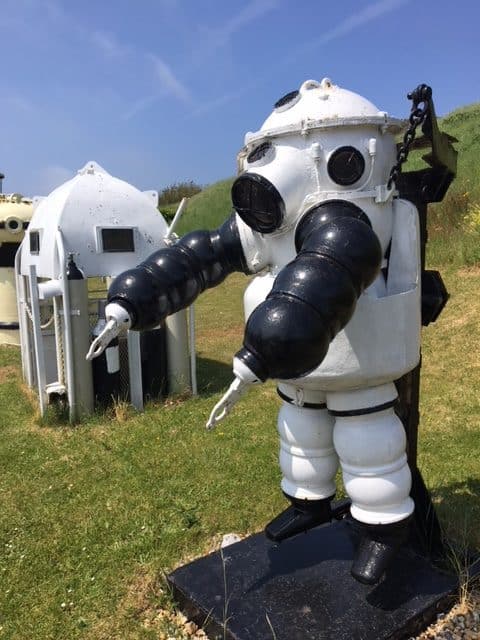 I was absolutely overwhelmed by what I was seeing.

Diving is truly holistic. Of course, it’s about being underwater, but it’s also about what takes us there. What drives us to put the cylinders on again, to make that next descent.
The Diving Museum represents the pioneers that pushed the boundaries; the engineers that refused to take no for an answer; the scientists that literally lived and breathed underwater exploration. These are the people that made diving what it is today. Without them, we just wouldn’t be doing what we do.
Whether you’re blown out from a trip, just happen to be in the area or are thinking about making a special trip, a visit to the Diving Museum will not disappoint.

Andrew Tonge is a qualified technical diving instructor with an interest in all aspects of the diving. He is a former navy submariner, now a lawyer living in Manchester