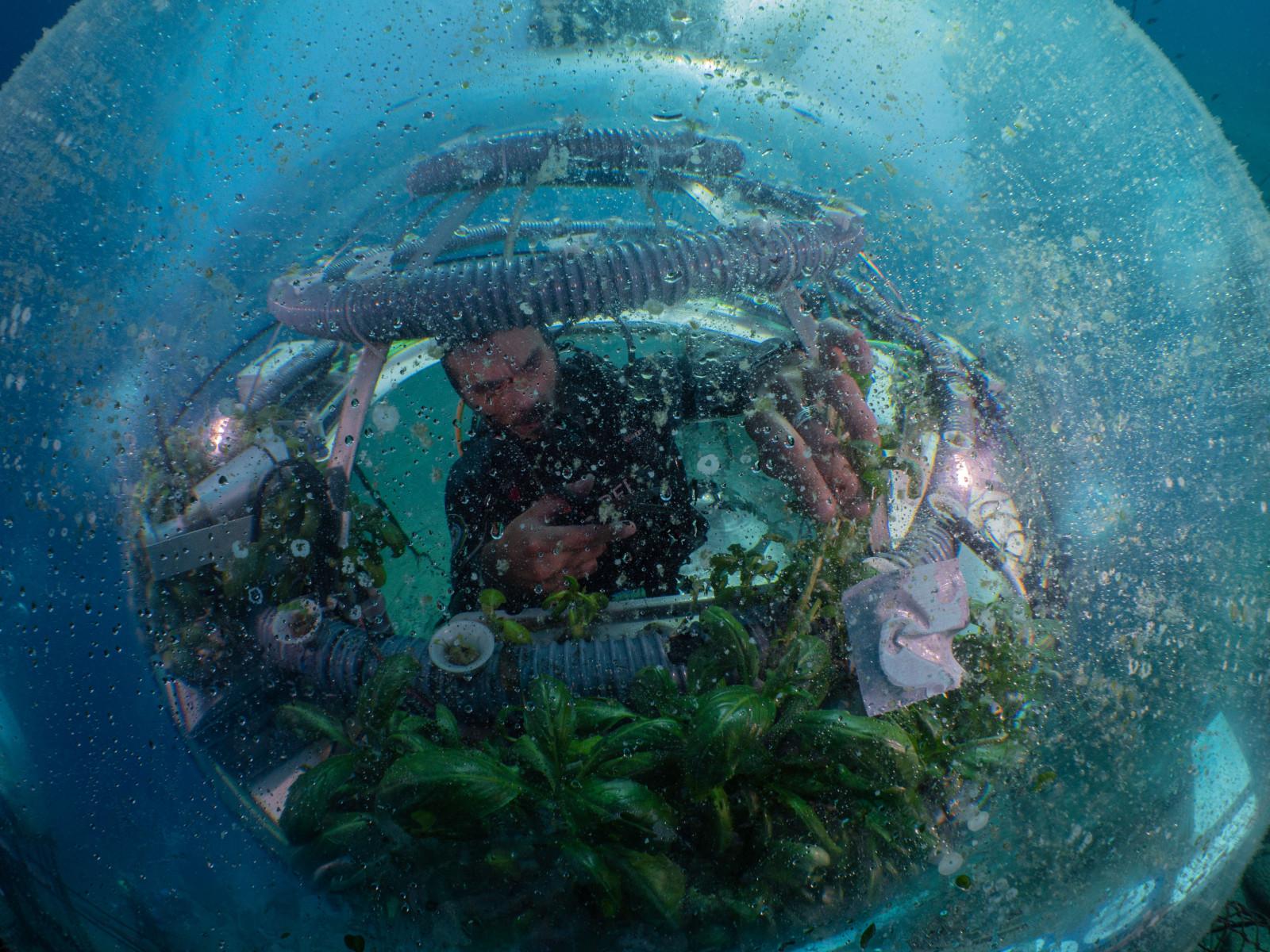 The event and competition are co-ordinated by the UN Division for Ocean Affairs and the Law of the Sea, Office of Legal Affairs, and were produced in partnership with Oceanic Global. The competition is curated by Ellen Cuylaerts, hosted by DivePhotoGuide (DPG), and made possible in part through the support of the Blancpain Ocean Commitment.

Ten judges announced the first, second and third place images from around the world in ten categories during a 20-minute video segment. A 2020 World Oceans Day Theme winner was also selected by the organisers.

Congratulations to Joanna Smart – well known to Scuba Diver readers during her stint as the Our-World Underwater Scholar – for her winning image in the World Oceans Day 2020 theme category, Innovation for a Sustainable Ocean.

Well done to the other category winners, as well as to all the runners-up.

All participants signed a Charter of 14 commitments regarding ethics in photography. 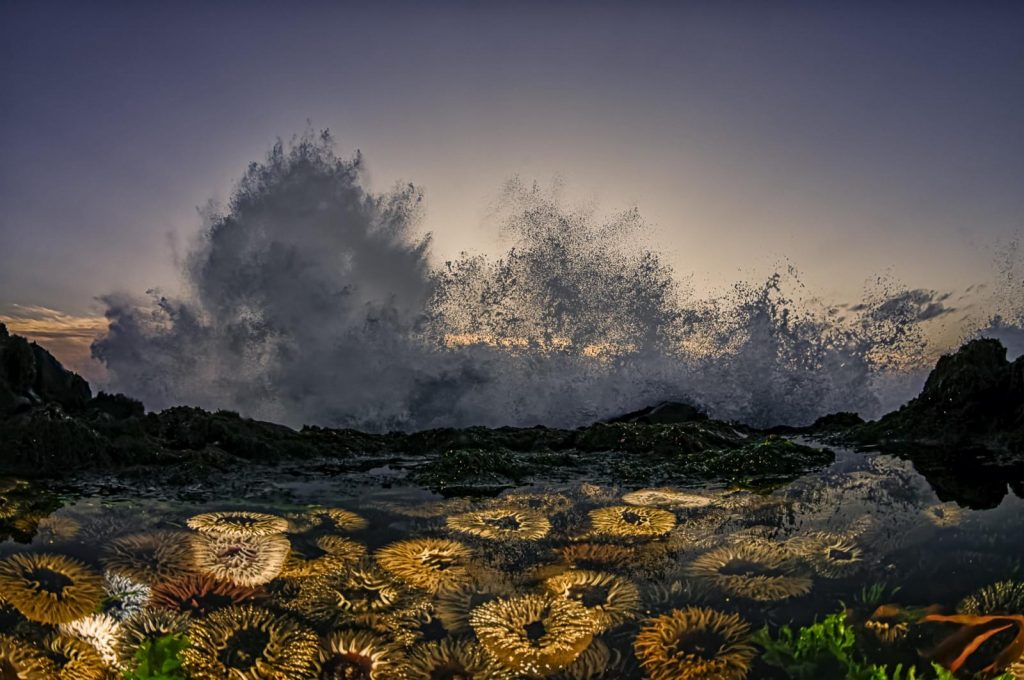 ‘Tidal pools fascinate me. Where most other environments on Earth operates on a yearly clock following the four seasons, tidal pools follow a twice-daily clock. The creatures who call tidal pools their home, need to be well adapted in order to survive in these very dynamic environments. One such creature is these sandy anemones (Aulactinia reynaudi).'

‘As the tide drops and the water, which normally covers and protects these anemones, drains away they undergo a drastic change in appearance. They close-up onto them shelves and shrink into small little blobs which don’t at all resemble the opened anemones in shape or colour. I like to think of it as if they go into a ‘hibernation stage‘ for a few hours to protect themselves against the harsh topside elements.'

‘When the time turns and the crashing waves start to bridge the peripheral of the tidal pools with “fresh” nutrient-rich the anemones awake from their hibernation. Now the anemones must rely on their powerful foot muscles, with which they cling to the rocks, in order not to be swept away by the forceful waves and currents. As the tidal pool fills with water over the next few hours, the anemones return to their former colourful state. In full “bloom” the anemones are now ready to capture and feed on any food the waves and the rising tide might sweep past them.' 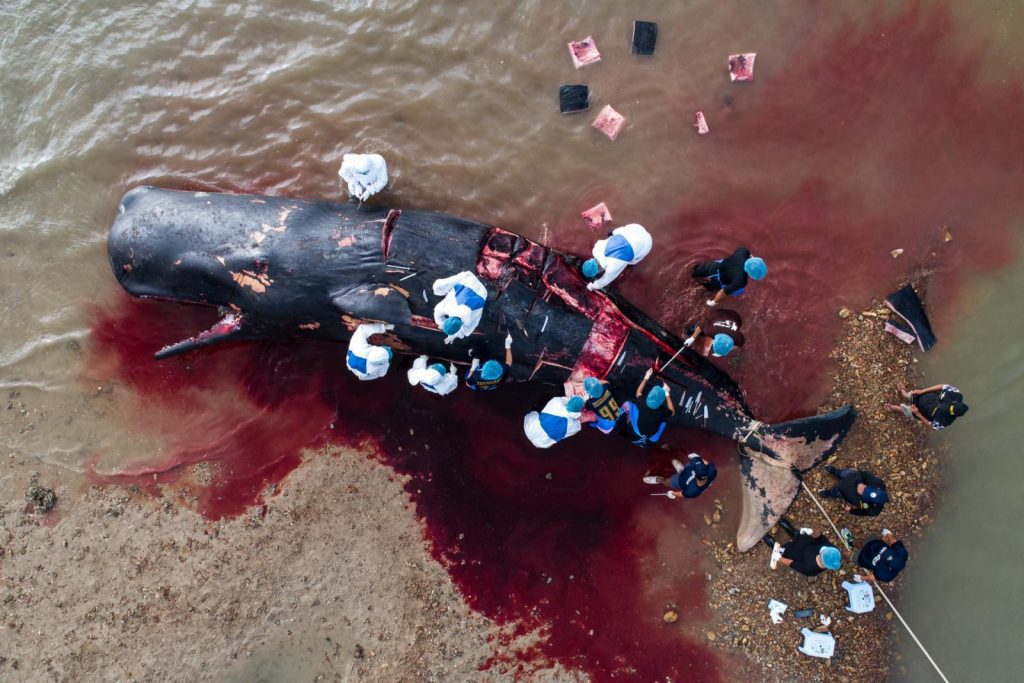 ‘Deep red blood disperses over the sandy beach with the incoming tide, while a team of aquatic veterinarians from the Department of Marine and Coastal Resources conduct necropsy on a 12-metre-long carcass of a sperm whale (Physeter macrocephalus) at Mu Koh Lanta National Park, Krabi Province, Thailand. The official necropsy results reveal that the primary cause of death of this pelagic cetacean is likely from organs failure due to illness, yet there were presence of plastics waste inside its digestive system, which could contribute to its untimely death, while also showing the far-reaching human effect of human behaviour in the wide open ocean.'

NB: The photo was shot in collaboration with the Department of Marine and Coastal Resources of Thailand. 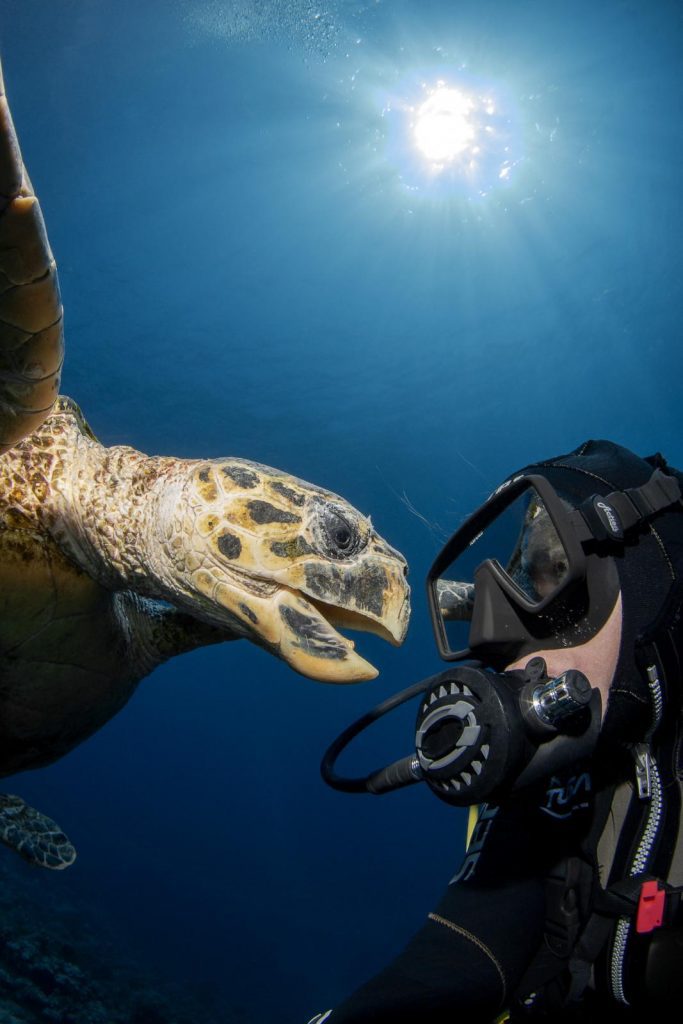 ‘I made this shot of a male of hawksbill sea turtle (Eretmochelys imbricata) five years ago in the south Lagoona dive site in Tiran Island, Sharm el Sheikh,Red Sea. I still remember very well that moment as I was having my new housing and this turtle was gently swimming above our group around 15m for most of our dive and so I decided to approach him gently for some photos.

‘I just had the chance to make one shoot and he suddently came very close to me very intrigued by my mask, perhaps because he was able to reflect himself on it. Wanting to enjoy the strange moment I left my housing with one hand and with my left hand I raised it and took this photo towards us.

‘The turtle was then still close to my face for some time and beat with his muzzle on my mask and in the end he also tried to bite it. Then when the other scuba divers approached to see the rare scene, always very gently, he resumed his path. Never has such a thing ever happened to me again, so i feel lucky to have had such a moment.' 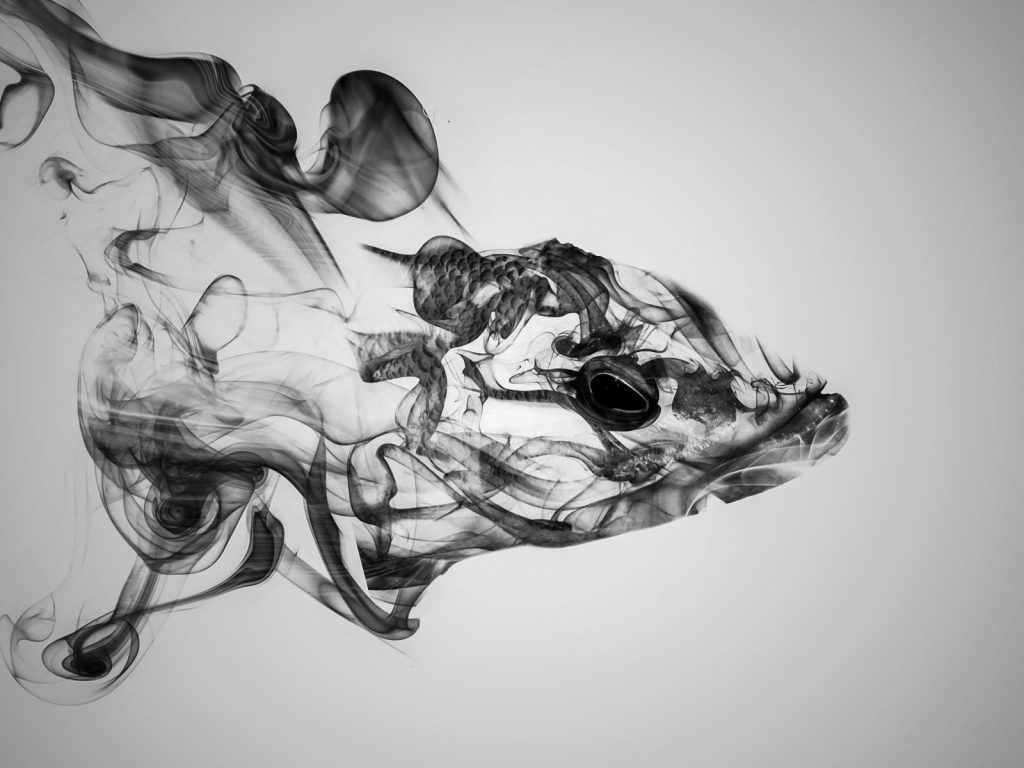 ‘United Nations' 2019 report about global biodiversity states that extinction rates are accelerating and that we have already significantly altered 66 percent of the oceans. However, the COVID-19 crisis has given our planet a break. While we #stayhome, many reports are showing marine species reclaiming their niches. Evolution often arises amidst a crisis, and this one is giving a clear sign: a sign that we can still repair some of the damage to ensure our coexistence with a rich biodiversity. How many pandemics will it take to keep this world from going up in smoke?'

‘The original image is a portrait of a Serranus cabrilla grouper. I turned it black and white, and using layer masks, the liquify filter and a smoke brush in Photoshop I was able to achieve this effect with the aim of representing how the biodiversity is shrinking. ‘ 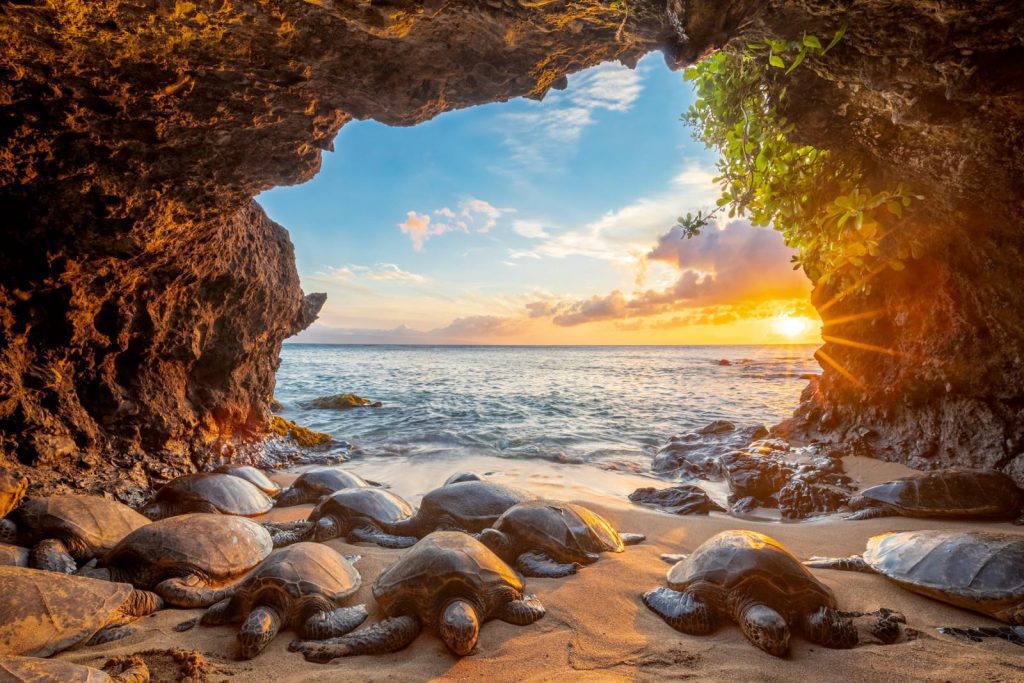 ‘This was taken in Maui, Hawaii. I happen to stumble upon this location by accident, during an afternoon swim. I thought it would make a great sunset spot so I ran back and grabbed some gear. The tide was rising so it was only accessible by swimming. I towed everything in a small pelican case and boogey board. It was quite the adventure! Spent several hours just sitting with these guys waiting for the sun to set. Shortly after this I had to quickly find my way back to shore in the dark.' 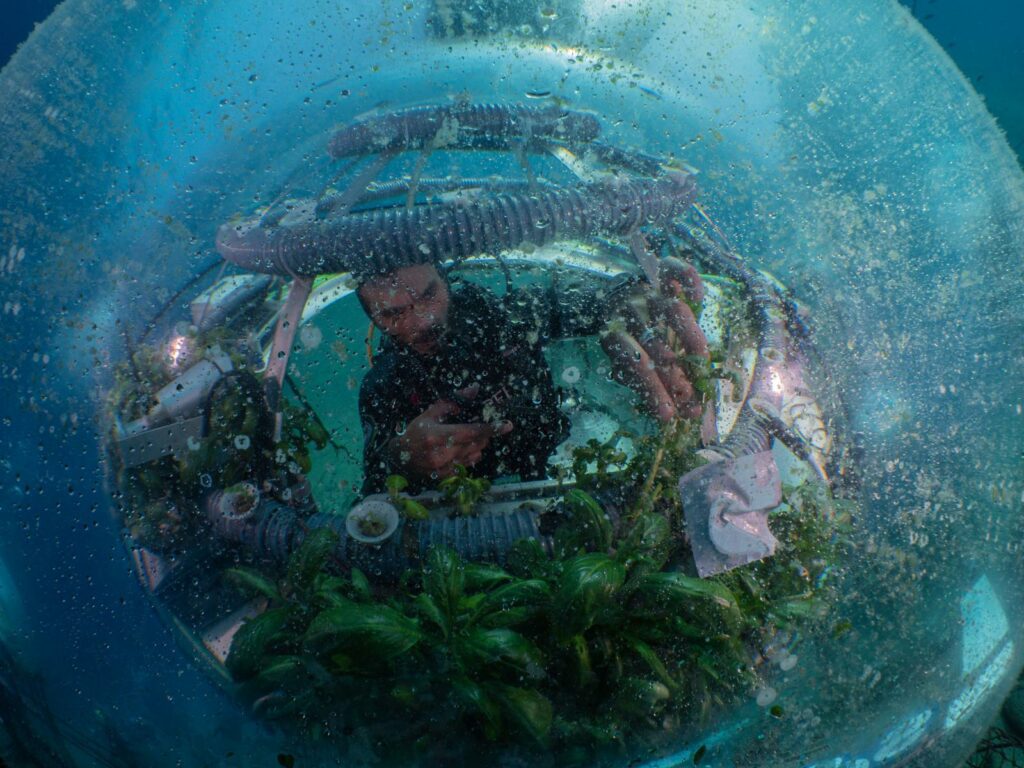 ‘Some10m under the sea surface in Italy, a gardener tends to his plants. Nemo's Garden, created by Ocean Reef, consists of six air-filled biospheres and is an innovative experiment in alternative agriculture. Basil, lettuce, herbs, strawberries and tomatoes thrive in this unique underwater environment. The hydroponic systems produce their own fresh water through condensation and are powered by solar and wind energy. The biospheres of Nemo's Garden may provide an alternative source of food security in regions where land agriculture is not possible. Additionally, the garden provides a fantastic experimental laboratory for growing plants in extreme environments, with applications to space travel, including potential future missions to Mars.' 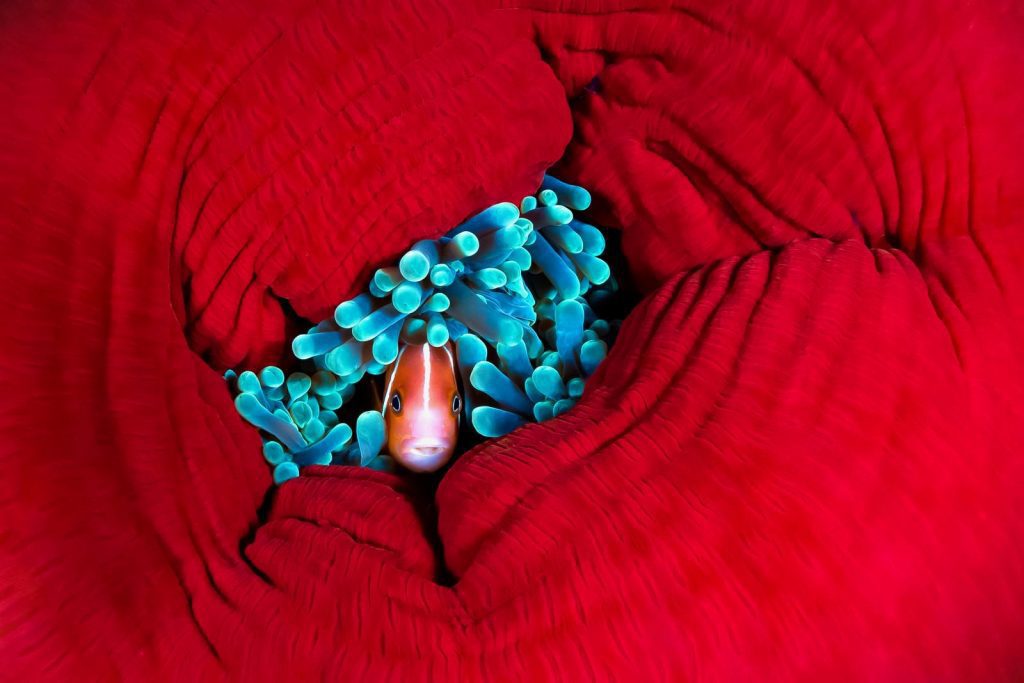 ‘I was scuba diving in the Ngemelis region in Palau in the South Pacific when I encountered this magnificent sea anemone closed up against the current, revealing its vivid red underside. As I studied it more closely, this resident pink skunk anemonefish stuck its head out of the anemone to inspect the intruder in its territory, which is when I snapped this photograph. Taken with a Canon 5D3 with a Canon 8-15mm fisheye lens at 15mm with a Kenko 1.4x teleconverter in a Hugyfot housing and with dual Inon Z-240 strobes.' 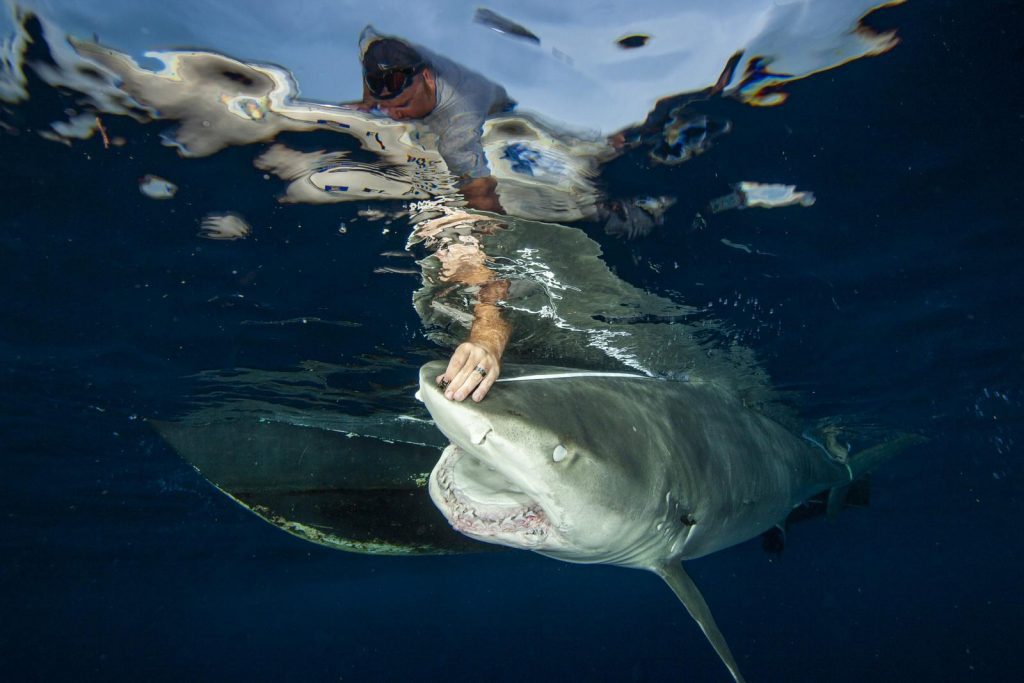 ‘This shot was taken as part of documenting a project by the Bimini Biological Field Station – Sharklab (BBFS). The BBFS is located on Bimini island in the Bahamas. Their research deals primarily with the juvenile lemon sharks that use the inner lagoon of Bimini as a nursery. However, from time to time they explore other areas and look for other species of sharks.'

‘The Gulf Stream is just to the west of the island, and the depth drops off precipitously. The Sharklab set a deep, vertical line of hooks to see what kind of sharks would be patrolling this deep wall. We caught this large almost four metre tiger shark (Galeocerdo cuvier) at a depth of over 300m. We roped the tail and tied it up along our boat.'

‘Tiger sharks can pump water over their gills even when sitting still. The researchers still worked quickly to tag and measure this large shark. The most delicate part of the process is getting an accurate length measurement. Someone needs to hold the end of the measuring tape on the sharks snout, what we term the ‘bitey end'.'

‘Once the workup was done they removed the hook and successfully returned this impressive fish back to the depths. This same tiger shark was caught again on a similar deep set two months later, showing that this deep habitat may be important in its movement patterns.' 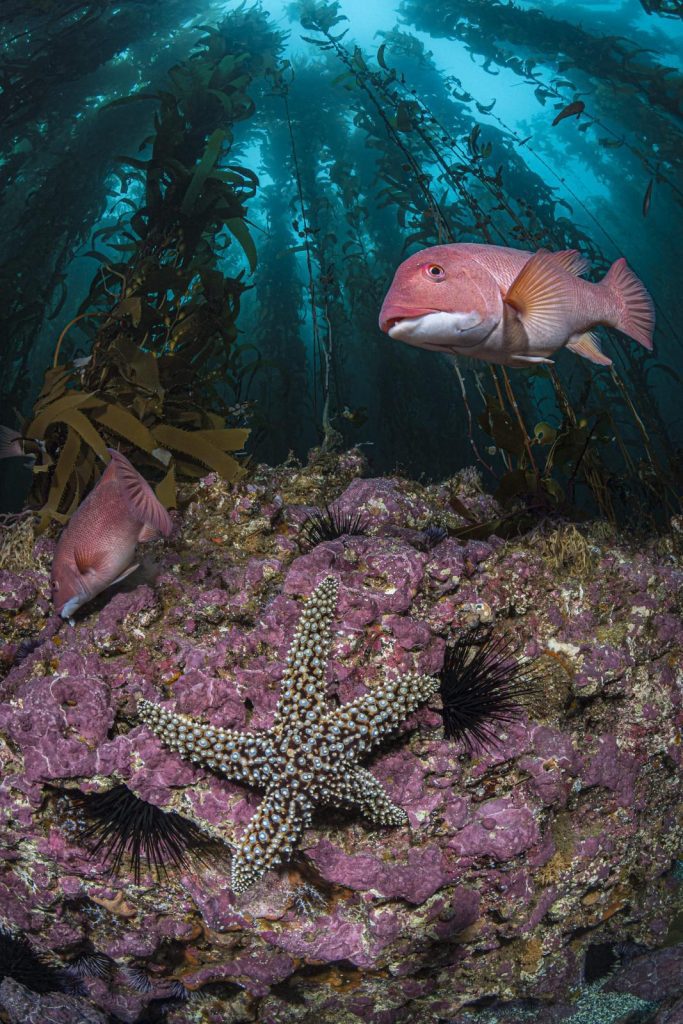 ‘A pair of California sheep head (Semicossyphus pulcher) and a giant sea star (Pisaster giganteus) in the kelp forest around one of California’s Channel Islands. These are incredibly rich habitats and host a surprising range of colourful creatures.' 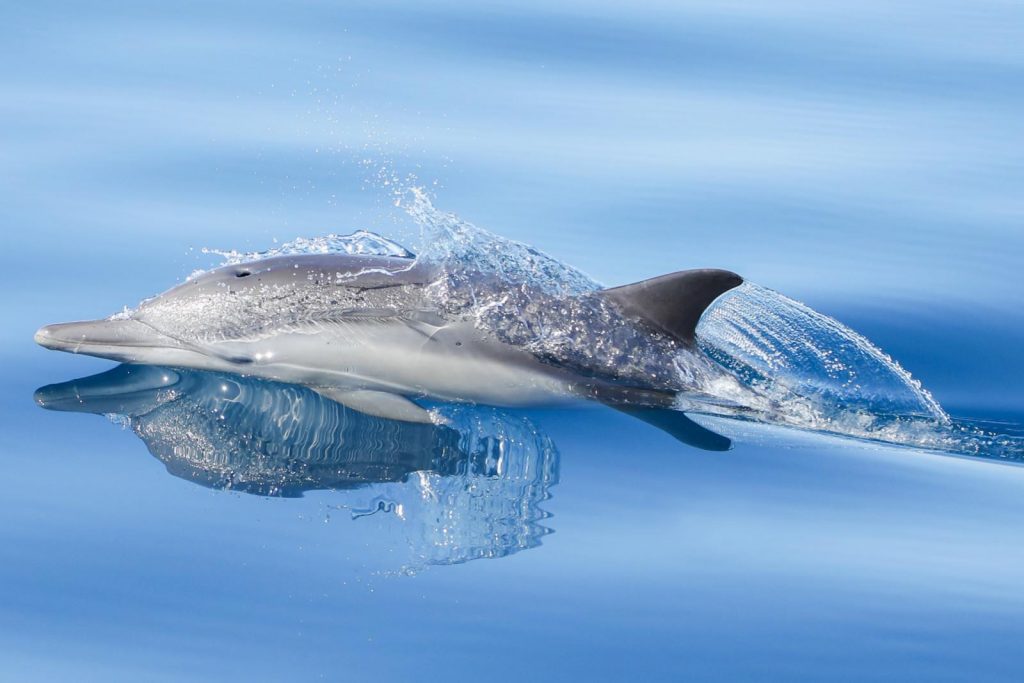 ‘I took this photograph while on our family boat on its way to Catalina Island. The water was perfectly glossy when we were joined by a pod of common dolphin surfing on our wake. I quickly grabbed my camera and while leaning over the railing of our bow, was lucky enough to capture a perfect shot of this young dolphin breaking through the surface of the water.'