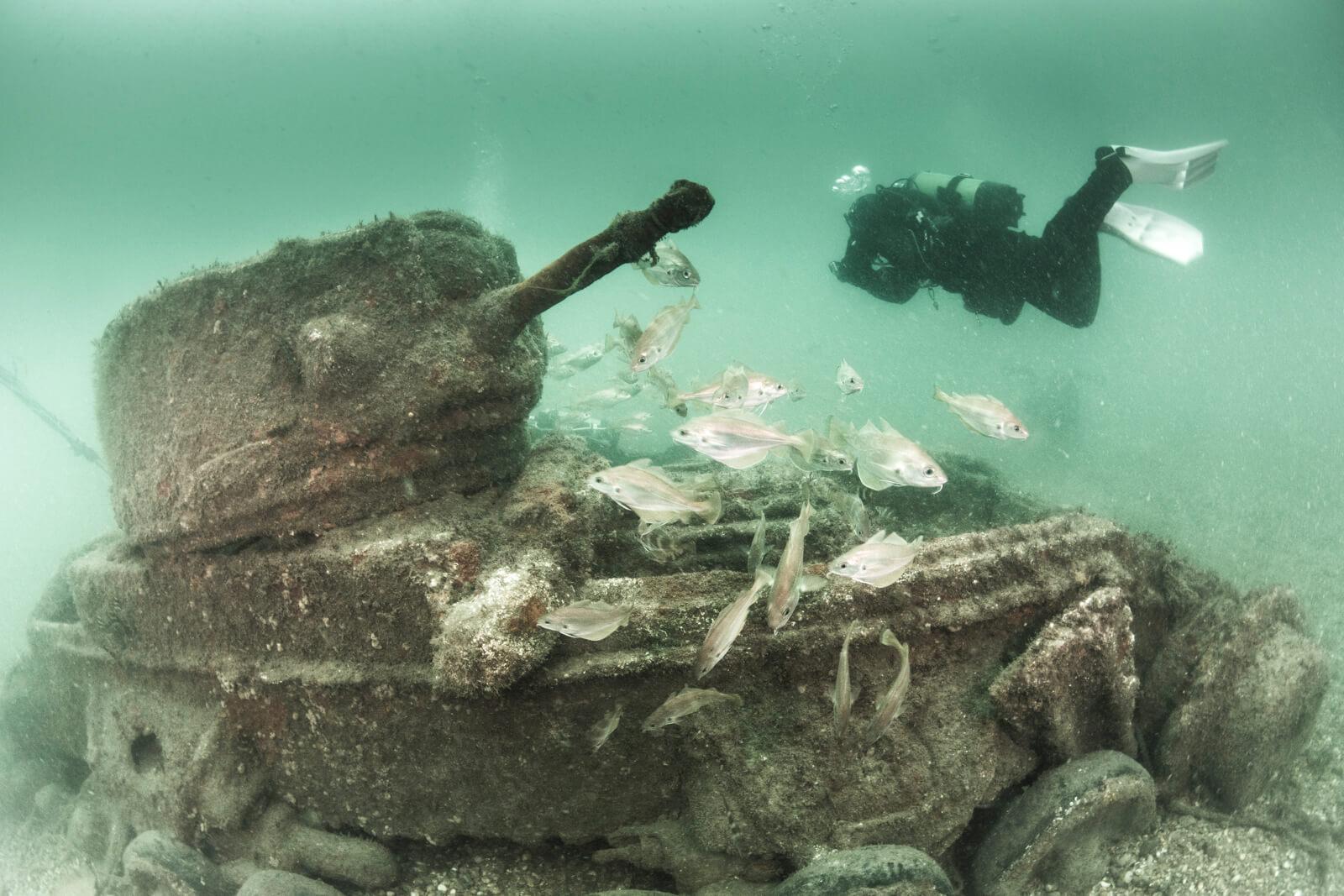 My wife started diving first with the Stevenage Sub-Aqua Club in the mid-1990s. I got bored hanging around waiting for her, so I thought I might as well give it a go. I began diving when I lived in Auckland, New Zealand in the early 1990s, with my first open water dive being at the Poor Knights Islands.

Tell us about your image which was a runner-up in the British Waters Macro category of the Underwater Photographer of the Year 2019.

This picture of a sea hare was taken just before the major restoration works commenced on Swanage Pier. The subject was crawling along a broken pier leg, and was perfectly positioned for me to take a picture. These creatures are often mistaken for nudibranchs, but are a different group of sea slugs. The colour of the sea hare tends to adhere closely to the colour of the weed on which it feeds. It’s my quest to promote the beautiful sea life we have here in the UK.

Diving by about 20 years. I didn’t even know how to use a camera when I started. I began with a compact and had no idea how to use it so I bought a DLSR instead.

Dorset in the UK. I think it is very a underrated location, as is all of the UK. Many divers opt for the colours of Egypt overlooking what we have on our doorstep.

The Mulberrys in the UK, which are relics left over from the second World War in Selsey. I got caught up in someone else’s line as I went over the side of the rib. I lost my buddy and had to spend the next 20 mins cutting myself free of line before I could surface and alert the boat.

Ken Sullivan. For those who don’t know Ken, he is a founding member of the Stevenage Sub-Aqua Club that was established more than 50 years ago. When Ken started diving, he made his own underwater camera housings. He is still diving well into his eighties and has amassed an incredible portfolio of award-winning photos.

I have never photographed whales, as the opportunity has never arisen. I’d like to photograph them in UK waters, mainly because I do not have any for my catalogue and also because I think it would be a privilege.

Try not to copy others. Find your own style and work on perfecting it.

I was on a shallow solo dive under Swanage pier trying to capture a tompot blenny when suddenly, I was engulfed in a vortex of bubbles as my regulator house blew. Luckily, I was only at three metres so I was able to make my way directly to the surface.

It was my first dive in Kimmerage Bay. I was knocked out by the sheer beauty and colour of the reef.

Paul Pettitt is a published award-winning photographer who learnt to dive while living in New Zealand in the early 1990s. Paul has a base in Dorset and is currently concentrating on promoting the beautiful diversity in the UK.