Outdoor adventure photographer and writer Joanna Lentini talks openly to Scuba Diver about her photography experiences - from an anxiety inducing false missile alert in Hawaii while en route to a dive, to unforgettable underwater encounters with orcas…

I’ve always been interested in the oceans. But ultimately, the real inspiration came from too many hours of nature documentaries such as Blue Planet, Planet Earth, etc. I especially enjoyed watching behind the scenes footage of the cameramen immersed in epic, natural events. One day I decided I wanted to stop watching others and learn to dive myself. But, I didn’t want to simply dive—I wanted to shoot underwater. Nearly ten years ago, I moved to Southeast Asia and had the Coral Triangle practically in my backyard. I decided it was a better time than any to get certified to dive. I started shooting during my first few dives and never put the camera down. 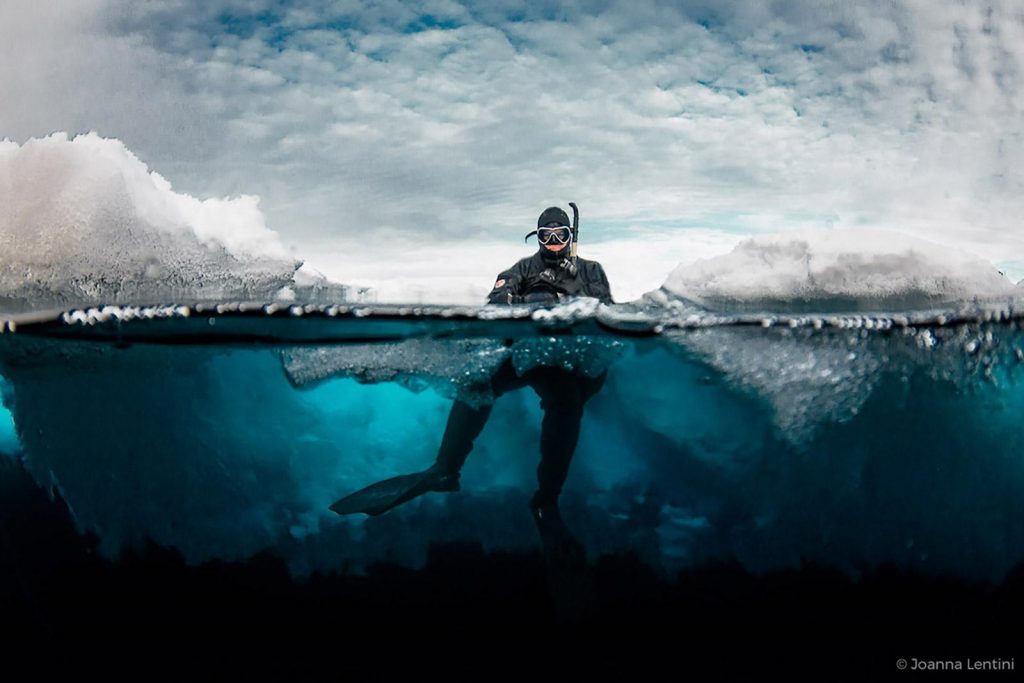 I always had a strong affinity for photography and the natural world. While photography came first, I didn’t take it seriously until I started diving. I basically learned to dive and properly shoot at the same time. I definitely don’t recommend doing it that way, but I knew my time living in Southeast Asia was limited so I felt a bit of pressure to document my dives.

Nothing too fancy. Underwater I shoot with a Canon 7D Mk II, and a Tokina 10-17mm lens. I have other lenses and ports, but the Tokina is my go-to lens. My camera goes into a Nauticam housing and I use Inon Z240 strobes. I also have a Sony AX100, although it doesn’t get in the water that often anymore.

Baja – the marine life encounters around the rugged peninsula are some of the best I’ve had. I love shooting pelagic life, and this is a great location for that: whale sharks, smooth hammerheads, makos, sea lions, mobula rays, orcas, silky sharks, humpback whales, blue whales, gray whales, dolphins – it’s all there.

Immediately after the false missile alert in Hawaii in January of 2018. The anxiety that I felt from the event was enormous. I was on Oahu, about to take my father diving for the first time, when an emergency alert popped up on my phone. It basically said, “Ballistic missile threat inbound to Hawaii. Seek immediate shelter. This is not a drill.”

We were driving at the time and halfway between where we were staying and where we were heading to dive. As we were a good 40 minutes in either direction and completely exposed on the motorway, we called our families back at home. About 35 minutes after we received the alert, we were relieved to find out it was a mistake. But the anxiety that had built up was some of the worst I’ve ever experienced – 35 minutes was a bit too long to think about dying.

I probably should have skipped the dive but it was a shallow, easy dive site with no currents and good visibility. I thought it would calm my nerves. My father’s dives went well, and by the middle of the second dive I decided to cut it short and exit the water. It took a while for the edginess to dissipate. Diving for the next few months brought me right back to that awful morning and was something I had to work on to get past.

I have many, but a few are: Didier Noirot, Doug Allan, Jennifer Hayes/David Doubilet, Alex Mustard, and, of course Jacques Cousteau.

The idea of photographing the sardine run in South Africa was the major driver in all of what I do. It inspired me to get underwater. However, I haven’t done it yet. And while I was in Antarctica earlier this year, I would like to return one day to dive.

Well, I’ve never come close to running out of air, or felt threatened by an animal. I have been in some pretty strong currents in Raja Ampat, in the water near imploding icebergs in Greenland, and attacked by an army of clownfish in Lembeh; but I think the hairiest moment was when a fellow photographer jumped out of the boat on top of a crocodile I was a few feet from photographing. Luckily the crocodile and diver were fine, just a bit startled.

Well, I have two that I can’t decide between. In May of 2017, I was photographing sea lions off of La Paz, Mexico. An adorable sea lion pup took a sincere interest in me, which eventually led to him resting his head on my mask and staring into my eyes. It was quite special.

The other would have to be freediving with orcas in June 2018. It’s right up there with encountering crocodiles, but the orcas seemed genuinely interested in our presence while the crocodiles could not care less. Orcas have an incredible presence that is quite humbling. Whether its topside or underwater, it’s an incredible feeling to come face to face with a wild animal. All of these experiences have been great life lessons.

Joanna Lentini is an award-winning outdoor adventure photographer and writer based in New York. Joanna’s passion for the natural world and photography ignited from an early age and has led her to explore diverse environments around the planet—from the Arctic to the Coral Triangle. Joanna runs Deep Focus Images and her work can be found on her Instagram and Twitter pages.

21st April 2021
Natural England and the Ocean Conservation Trust have announced that work on England’s largest seagrass planting effort is taking place from 21 April in...

What is in you Save the Dive Spares Kit?