Despite living in the Caribbean, underwater photographer Ellen Cuylaerts loves diving in the green waters of the UK. She chats conservation, cave diving and trusting your instincts on when to call a dive in this interview with Scuba Diver magazine…

I moved to the Cayman Islands in 2009 and certified as an Open Water diver by the end of the year. I was still busy homeschooling my children and never went diving until a refresher in 2011. The kids were a bit older and I wanted to combine my long lost passion for photography with the love for marine life and protecting it by documenting while diving and snorkelling. Since I did not feel comfortable after just an Open Water course, I kept learning about diving and did a few specialties, one of them underwater photography. Before starting I bought my first camera since I was young, an Olympus EPL 2 AND a book ‘EPL for dummies’. It was my best buy ever!

I always was interested in photography, but in the days before digital it was a hobby that I just couldn’t afford. I did manage to buy a camera when I was 13 with my babysitting money – a Nikon F3. I was over the moon until I realised that the camera was just a start, and I needed different lenses and a hotshot flash and, and, and… After shooting mainly outdoors and hitting some limits my camera gathered dust. I did use a full automatic EOS for family holidays but never had time to dig deeper into photography until I went diving and wanted to combine the two. Within six months of diving I booked a workshop with Alex Mustard and won my first contest!

My standard travel kit is:

This setup is ideal for shooting on shallow dives with big animals, making the most use of ambient light and adding a little fill. I see the 16mm lens as the extension of my eyes. When shooting smaller fish or critters I’ll prefer a 60mm or 105 mm lens with flatports, a diopter and strobes.

The UK! For someone living in the Caribbean it might sound weird but I love the green in UK waters and I absolutely adore seals and sharks – of which you have plenty! I’ve only dived in the Farnes Islands, Portland, an English quarry and snorkelled in Lundy and Plymouth, but I can’t wait to visit the Scilly Isles and dive some wrecks scattered around the whole coast.

I  believe that I’ve made my whole dive journey quite challenging. First, there was my healthy fear of the elements and depths of the ocean, the realisation that we humans are only at the whim of nature. After feeling at ease in the ocean I conquered my fear of sharks because they need all the protection they can get and I felt the style of my images could make a difference in people gaining love and respect for them. Meanwhile I got some health hiccups and decided to stay in the snorkel zone, especially the cold one. My voice in conservation became louder and many times I longed to dive again but it wasn’t until 2018 that I found the right agency philosophy and instructor – RAID’s Garry Dallas. I wanted to be in total control during preparation AND during the dive, following the pace of my body and mind, immune for peer pressure. Only me respecting my limitations and speaking up for myself, while fine tuning my skills would make me a confident diver again. I challenged myself to become a full cave diver and I did! During the training there were a few seconds in the water when I thought about quitting, but pushing through and finishing a complex circuit dive with my buddy Charly Jones and our instructor Garry, I knew I was back.

My biggest diving inspirations are the professional search and rescue divers. They don’t dive for pleasure or fun but to save or bring closure to people they don’t know, with hardly any recognition and most of the time, in hard conditions.

Further inspirations are of course the people who use their imagery and footage to bring awareness about the challenges the oceans and planet earth are facing: Brian Skerry (Nat Geo), David Doubilet and Jenn Hayes (Nat Geo), Paul Nicklen and Cristina Mittermeier (Sea Legacy) and my ultimate inspiration are legends like David Attenborough (he, his voice and excellent narration ignited my love for nature at a very young age), Sylvia Earle, Jane Goodall and Carl Safina. Jane and Carl and their work regarding the human relationship with the natural world reassured me of my approach, trying to connect with animals and capturing their soul in an image.

That is a difficult one! Ideally I would travel and live out of my suitcases 12 months a year. I was born with a curious and restless nature, eager to be the change I want to see, contribute where I can and connect the right people to make great, constructive things happen. But reality keeps me at my desk finding the balance between the wanderlust and making g a living with the images and stories in my treasure chest! On my list are destinations with lots of marine life to capture hope and also to see with my own eyes what we need to protect because conservation work is sometimes quite depressing. Epic places like Antarctica, Vancouver island, Russia’s Baikal Lake and Ordo cave are also high on my list to visit in the near future.

To follow your own path! Dare to go off track, do things that are not commercial but are causes you believe in. I believe when you’re genuine, good karma comes your way. I see many underwater photographers run before they can walk, offering trips with no extra value them being there, only one person extra in front of your lens. Nothing in life comes for free: hard work, dedication, persistence and a good work ethic pays off.

Must have been a recent dive in Newfoundland where, due to a drysuit inflator hose issue, I got some cold water in my drysuit at the beginning of the dive. I got real cold real fast. I thought I had to man up, but didn’t realise there was also a buff causing leakage through my neck seal.

I got too cold to shoot and finally after 50 minutes got out of the water with some help, by that time me and my buddy only knew I was cold, not that my suit actually flooded and I was chilled to the bone. After a drive on the rib, taking shelter from the cold wind close to the bottom, we reached shore and I could get out of my wet clothes and put on some dry stuff. I went outside jumping myself to warmth with big arms and legs movements generating heat, a handy trick I’ve learned in the Arctic. Lesson learned: believe what you feel, call the dive when in doubt!

It’s hard to choose my most memorable dive, there are so many – freediving with a sperm whale calf together with my kids, manta rays dancing in front of me at night, evenings at the Cayman sandbar surrounded by stingrays while the sun sets, being in the middle of two pods of beluga whales in Hudson Bay, and many more. Those were all dives and snorkels where the encounter left me in awe.

The dive that stands out for me is a cave dive in a side mount cave after the end of my cave training. After a few fun dives and some with my camera, I left my photo gear for the last dive of the trip and concentrated on controlling all technicalities of the dive, anticipation on jumps and narrow passages and it truly felt like stealth gliding through a different universe. I wanted to be in the moment and truly enjoy the full experience! And wow, I did! 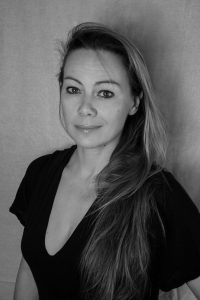 Ellen Cuylaerts relocated from Belgium to the Cayman Islands in 2009. Ellen has a masters degree in modern history and education but ended up working in IT until she decided to home school her two gifted teenagers, relocating and taking up scuba diving in June 2011. Soon she became a Master Scuba Diver and combined it with photographing the wonders of the underwater world.

Her main drive is shooting images that draw in the viewer so an emotional bond is established between marine life and people that might not have a link with the underwater world. By creating an image that captures how she feels rather than what she sees, Ellen hopes to get people involved in protecting our blue planet. Ellen has received many awards for her pictures and was the 2013 World Champion in the yearly online underwater photo competition ‘underwaterphotography.com. In 2014 and 2015 she came first and second in the United Nations World Oceans Day Photo Competition (which she now curates).  Those competitions have helped her to make her voice in conservation louder, and also to mentor more people to use their images to contribute to education, preservation and awareness. Ellen’s work can be seen in exhibitions in Paris, St. Petersburg, Valencia, Marseille and New York.

In June 2017 she addressed heads of State on World Oceans Day at the General Assembly of the United Nations highlighting the plight of photographers and filmmakers engaging in protection of the oceans. Next year Ellen will be inducted in the Women Divers Hall of Fame, Class of 2019.

Ellen will be on the the underwater photography dive show stage at the GO Diving show at Ricoh Arena in Coventry, which runs from 22 to 24 February, 2019. Find out more here.

23rd April 2021
The Stunning Coral Gardens of Raja Ampat - Brought to you by Meridian Dive Adventures The location speaks for itself! No two dives in Raja...

What is in you Save the Dive Spares Kit?