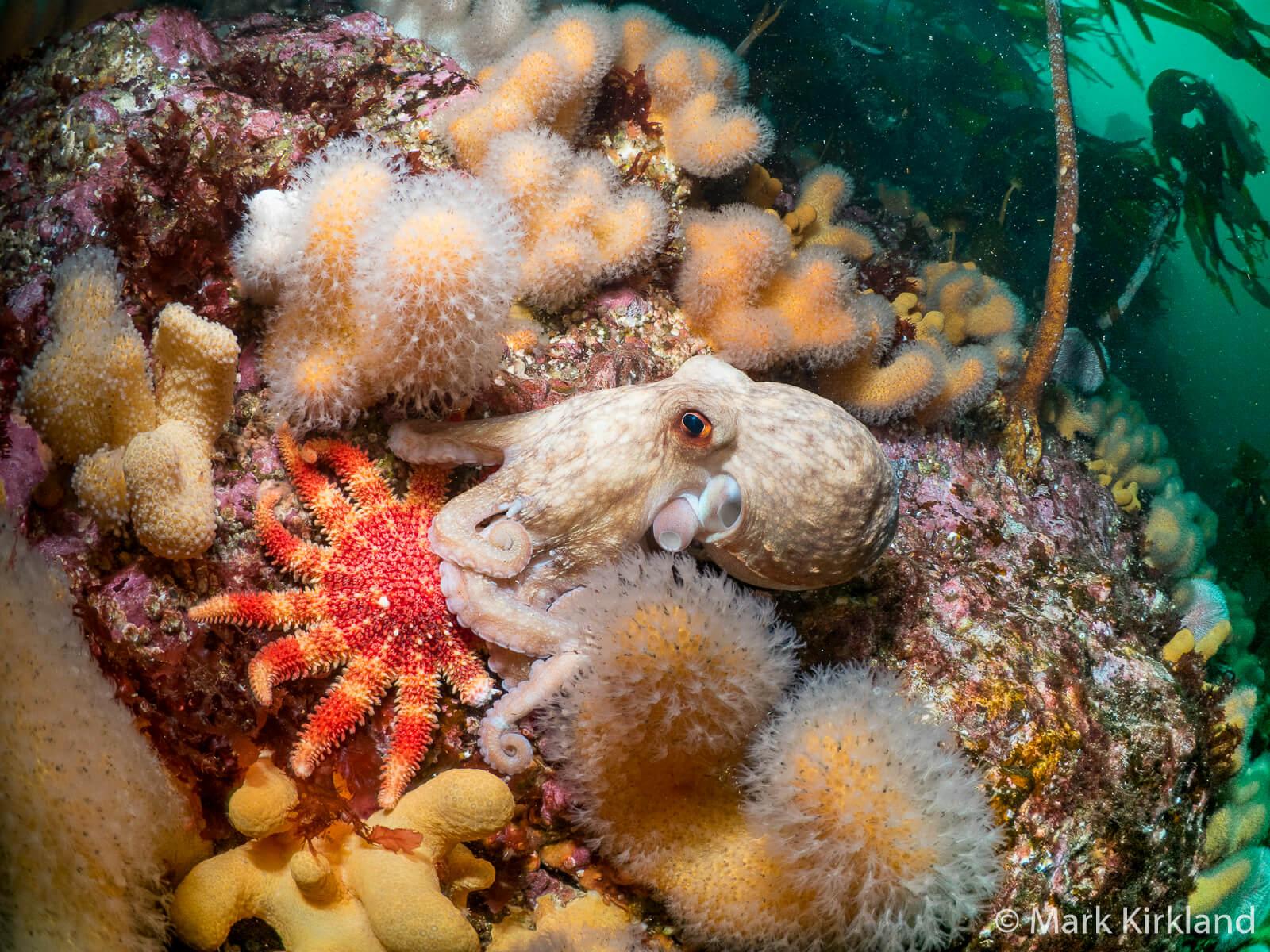 Whether it's drawing, painting or writing music, I've always enjoyed being creative. It's about engaging my imagination rather than producing anything brilliant, so when I started diving it took me into a new world of opportunities. When I began taking underwater photos, non-divers in particular were absolutely fascinated so I've found it a great way to share a passion and connect people to UK wildlife, which is otherwise hidden to them.

Diving came first. I've always had a fascination with the sea, which I think stemmed from early childhood holidays around the UK coast, so it was logical I'd get into diving at some point. I've been diving for around nine years and been taking photos for the last five.

What's in your underwater photography kitbag?

I use an Olympus OM-D EM5 MkII with a PT-EP13 underwater housing with flat port, and a four-inch precision mini-dome port. I've also got a large custom dome port which I'm hoping to get results from next summer. I use four lenses. The Panasonic 8mm fisheye is a surprisingly versatile all rounder due to its close focal distance, however, sometimes it is simply too wide. I then use the Olympus 60mm for macro and the olympus 14-42mm fits nicely between the two. More recently I've started using the Olympus 9-18mm wide -angle lens. I light using two Sea and Sea YS-110a strobes, dive torches or a combination of the lot.

The coast around Cape Wrath in the far North of Scotland is spectacular just for the sheer abundance of life and clarity of water. Visibility of 15-20 metres is common, and on one dive this year I could see the surface ripples from 34 metres down. It's an area that’s new to me and I now aim to go at least once a year.

I also love Scotnish in Loch Sween on the Kintyre Peninsula. It's a narrow and shallow stretch of water with a mixture of burrowed mud and maerl beds. It's remote, rarely dived and has a bit of a creepy vibe, but the plentiful macro-life makes it worth the journey.

Most challenging dive (and why)?

My focus is always on photography. I tend to stay shallow to take advantage of natural light and ‘no deco' time so rarely do ‘challenging' dives. Wreck diving in the Firth of Clyde is as challenging as it gets as the light can disappear rapidly, visibility is hit or miss and the currents can really whip across the wrecks.

There are three photographers whose work I'm continually drawn to:

Viktor Lyagushkin shoots in northern Russia and the sea life isn't dissimilar to that in the UK. His use of light is outstanding and he finds real beauty in the weirdness of life found in cold waters.

Angel Fitor's location is at the other end of the spectrum – the Mediterranean. His images seem to draw a deeper sense of meaning from his subjects. He's a great writer and visual storyteller, and no matter how much I study his images, I can't quite put my finger on why they are so profound.

David Hall is a veteran photographer based in the North West pacific coast of America. I love his use of colour and texture and his split-photography in cold water has been a particular influence.

I'm keen to capture more UK species. Bobtail squid, John Dory and spurdogs are species I've never seen but would make amazing subjects. I've taken some awful photos of conger eels, basking sharks and gurnards so they're still on my list. They're all unique either in character or form, so with the right planning and a bit of luck, have the potential to make some special images.

What advice do you wish you'd had as a novice underwater photographer?

Prepare for your subject. I spent the first few years chucking different lenses on without considering the likelihood of getting the right subject, what the natural light might be and how my camera should be set up. I'm much more meticulous in planning my photographs now and dive with a potential photo in mind. Learning is also continuous – until recently I still didn't do enough preparation and would frantically adjust my strobes and camera settings as that dream subject swam off into the distance. I now start the dive by doing test shots on a static subject so that I'm ready for whatever I encounter.

Last year's dive of the Tabarka in Scapa Flow felt like a close call. While it sits in just 15 metres of water, the tides can be extreme, so slack diving is essential. Unfortunately our timing was out and the tide turned just a few minutes into our dive. It proved almost impossible to navigate around the wreck and after getting separated from my buddy, I inflated my SMB only to see it go down the way instead of up! It took me an eternity to battle through the down current to eventually surface, exhausted and with limited air. Thankfully we had a skilful skipper to safely pluck 12 widely dispersed divers out of the water.

Not a dive, but a trip to snorkel with Blue Sharks off the Cornish coast turned into something even more special when we came across “the boiling sea”. We jumped in the water to witness a bait ball of juvenile horse mackerel being decimated by bluefin tuna, dolphins and blue sharks with hundreds of seabirds plunging in from the top. I know I'll never experience something like that in the UK again.