Stolen U-Boat propeller recovered from Wales is returned to Germany 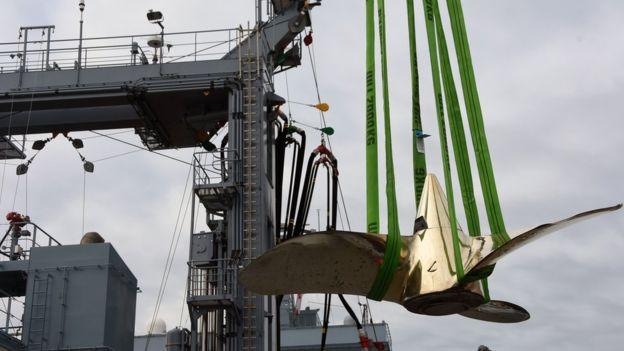 German World War One submarine UC-75 was responsible for sinking 56 merchant ships and two warships before it was sunk itself in the North Sea off the East Yorkshire coast in 1918. Subsequently, it is believed that the dual propellers off the U-Boat were illegally removed by a diver, before being found last year during a police raid on a property in Bangor, North Wales – and now one of them has been handed back to the German Navy in Plymouth, with the other going on display at the Royal Navy Museum in Portsmouth.

Presenting the propeller – which with its sibling took students and instructor Paul Stevens at Southampton’s College of Marine Skills over 50 hours to clean – Vice Admiral Sir Alan Massey, chief executive of the Maritime and Coastguard Agency, pictured below right, said: “These propellers tell a story of bitter conflict and human loss, but also of bravery.

“It is fitting that they will now serve to remind citizens in both our countries of the realities of war and the personal sacrifices that inevitably follow.” 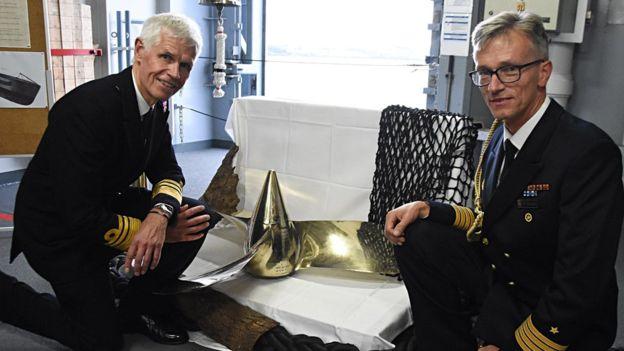 The coastguard agency also used the case – which led to one man receiving a formal caution over the find – to highlight the importance of historic wrecks around Britain. Receiver of Wreck Alison Kentuck said: “It's not a case of ‘finders' keepers' and all recoveries of wreck material must be reported to the Receiver of Wreck so that legal owners can be given an opportunity of having their property returned, and museums and other institutions be given an opportunity to acquire artefacts of historic significance.”

In November, two services will be held in the UK and in Germany to honour those who died during the conflict.

Captain Matthias Schmidt, German Naval Attache, who accepted the propeller from Vice Admiral Sir Massey, said: “The propeller witnessed the struggle for life 100 years ago. It will come home. It will be officially handed over to the Naval Museum in Laboe on the occasion of Armstice Day in November.

“The story of UC-75 is ending in a message of reconciliation and hope – the fruit of the close partnership between our two nations that has brought us together here today.”