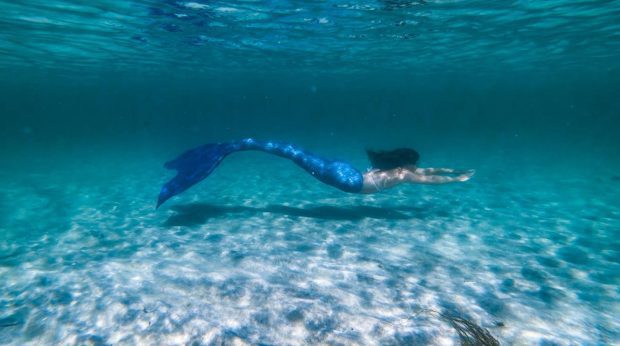 A new four-part TV series on BBC Alba will showcase Scottish mermaid Kate Macleod exploring the waters around her home on the Isle of Lewis.

The series – Miann na Maighdinn-mara, or Mermaid Tales – follows Kate as she ventures into the sea around her home district of Uig.

While she swims and freedives in a wetsuit in the summer months, due to the amount of jellyfish in the waters, in the winter she braves the cold in one of her custom-made mermaid tails and a bikini top.

She grew up in Lewis, daughter of boat company owner father Murray and mother Janet, along with her brother Seumas.

According to her mother, she has always had an affinity for the sea, and the TV series is a real labour of love for her, as she explores the west coast of Lewis and nearby smaller islands by boat with her father, on her kayak, and underwater in her monofin and mermaid tail.

Along the way she also talks to knowledgeable locals about the fascinating history that lies on her own doorstep.

Kate said: “I have such a strong bond with the sea and Uig. I think a lot of islanders feel the same. There's something so special about the islands and Scotland as a whole.

“I feel so privileged to live in this part of the world, at the edge of the sea, and in the water. When I was young, I felt that if our sea was warmer, I would never leave it – I'd just be a mermaid for the rest of my life.”

The series starts on BBC Alba at 8.30pm on Tuesday 16 March (and all four episodes will be on BBC iPlayer for 30 days).