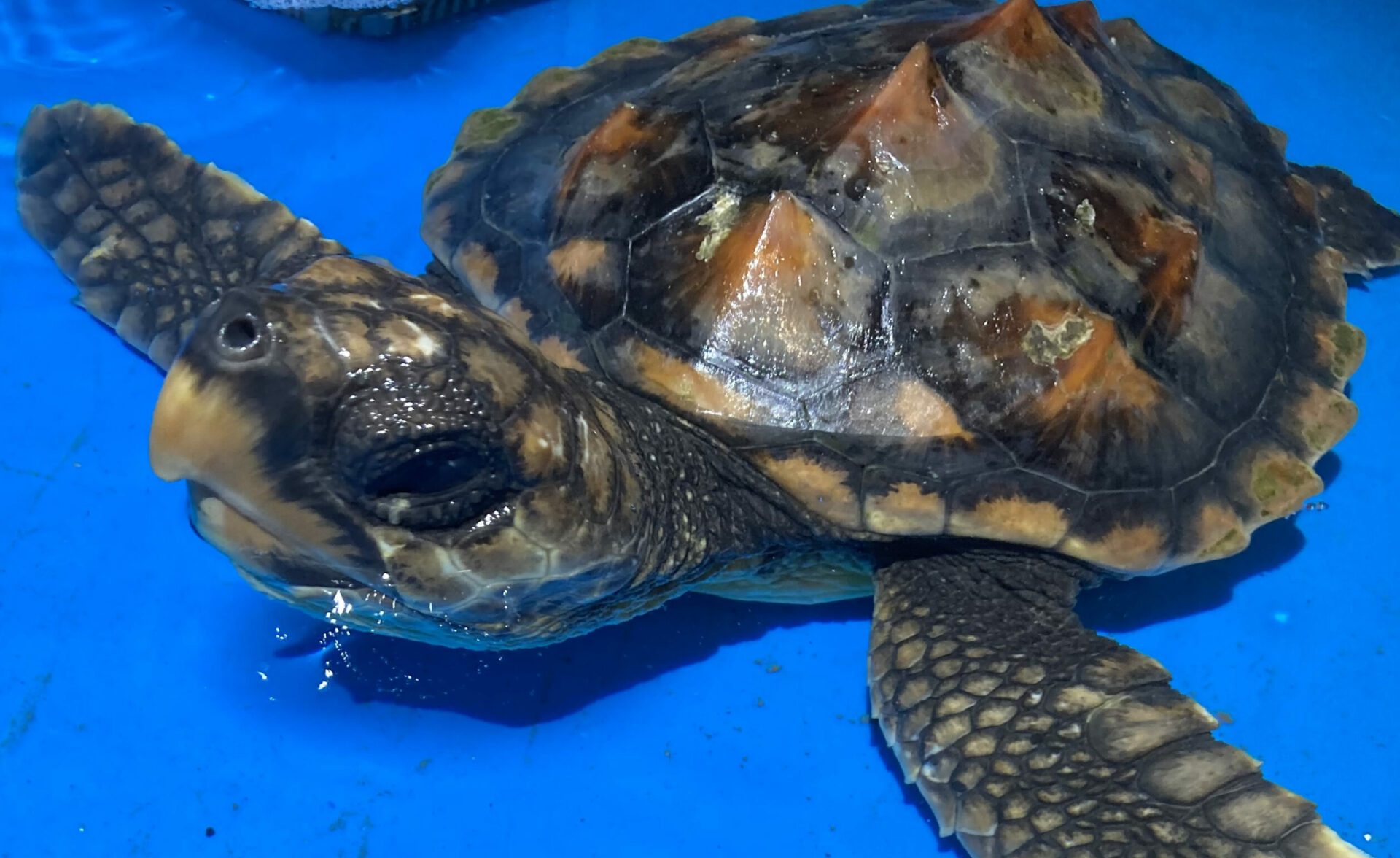 A tiny loggerhead turtle found ‘cold-stranded' on the shore of the Menai Strait on 5 January is showing promising signs of recovery after a few days of specialist care and attention at the Anglesey Sea Zoo.

The turtle, nicknamed Tonni, was found on Moal-Y-Don beach by a dog walker and their two dogs. Realising the tiny animal was still alive, they immediately contacted the Sea Zoo and kept watch on the turtle until it was collected and transferred to the Anglesey Sea Zoo for specialist intensive care.

Cold-stranded turtles often die during the process of being revived and the first 48 hours of recovery are absolutely critical, so staff have been focusing on getting the best possible care for the little turtle since it was initially brought in comatosed, dehydrated and malnourished.

Initial examinations of Tonni upon arrival showed few issues for concern other than it being very small at just 25cm long and 1kg in weight, with little apparent physical damage or deterioration. Vet Celyn Thorpe from Bennett Williams Veterinary practise in Gaerwen, Anglesey, has prescribed ongoing administration of fluids and vitamin supplements and more treatment will follow in a day or two upon completion of blood sample analysis and results.

Tonni is much too small to be able to determine its sex, hence the choice of a gender-neutral name, derived from ‘Ton', the Welsh word for ‘wave'.

Ms. Frankie Hobro, Director and Owner of the Anglesey Sea Zoo says: “We are delighted with Tonni’s progress over the last 12 hours! Following initial veterinary treatment with a boost of vitamins and fluids, after an initial 48 hours of intensive care and monitoring, little Tonni is starting to show very promising signs of sporadic activity and rest, and we are now progressing out of the initial intensive care stage of treatment and onto intermediate care. We are all very proud of this feisty little turtle and although it is still early days, we are now hopeful for a positive outcome.

“We are extremely grateful to the person who found Tonni and there is no doubt that without their speedy response in reporting it, this little turtle would not be alive. Our staff are working hard to rehabilitate little Tonni, as we did successfully with turtles Menai and with Tally, and we hope that it will survive and recover quickly so that it can be flown back and released in warmer waters further south.”

Tonni has made significant positive progress in the last 12 hours and as a result its long-term prospects now look promising. It is undoubtably in the best possible hands for rescue and rehabilitation as Anglesey Sea Zoo are recognised as experts in UK stranded tropical turtle rehabilitation following the successful rehabilitation of ‘Menai’ the Olive Ridley turtle, who was in their care for eight months from November 2016 after stranding at the bottom of the drive in the Menai Strait, and ‘Tally’ the Kemps Ridley, who was rescued from Talacre Beach near Rhyl last winter, and who is now fully recovered and still in residence at the Sea Zoo awaiting the finalisation of official paperwork and warmer sea temperatures in the Gulf of Mexico before being flown back out there for direct re-release.

Tonni is a loggerhead turtle (Caretta caretta), which are endangered and protected under the Convention on International Trade in Endangered Species (CITES) regulations, but one of the more common sea turtle species globally.

Loggerhead sea turtles are distributed throughout the world in temperate and tropical seas and the species is known to comfortably tolerate temperatures between 15oC and 28oC. There is a healthy resident population of loggerhead turtles in the Mediterranean Sea and across the warmer regions of the central and southern Atlantic Ocean all year round.

Both adults and juveniles of the species have been sighted offshore around the UK during the warmer summer months and this is likely to become more and more common with global warming and sea temperatures rising. But the species is unable to tolerate the colder winter sea temperatures around the UK and the Irish Sea, which are currently at around 8oC and in the winter months there are quite regular strandings of the species on beaches in southern Ireland and up the west coast of the UK.

Loggerhead turtles become extremely sluggish below 15°C and once the temperature drops to 10°C or below, particularly if it is a very sudden temperature drop such as a storm suddenly stirring up colder currents, they become comatosed, a condition known as ‘cold shock’. A turtle in cold shock may appear dead upon initial inspection, but if it is rescued quickly enough it may still be possible for it to be revived and make a complete recovery if it receives the correct specialist treatment. The cold and windy weather here is unsustainable for turtles to survive once they are stranded on a beach, and it is incredibly fortunate that Tonni was still alive when found, as many of the turtles washed up around the UK are already dead.

Loggerhead turtles are the most common non-native turtle species found stranded in the UK, both live and dead, and many have been successfully revived from cold-stranding and have recovered and been flown abroad for re-release.

The Anglesey Sea Zoo believes that large migratory marine animals such as sea turtles belong in the wild, and do not believe in having such species on long-term display. Therefore, like Tally, this turtle is not on public display at the Sea Zoo, it will continue to be cared for behind the scenes in the specialised and controlled environment which it needs to be properly treated and rehabilitated. Once it has fully recovered, the team will be delighted to see it returned to the wild where it belongs.

Anglesey Sea Zoo runs a voluntary Marine Animal Rescue facility to attend any stranded or injured marine animals. The Sea Zoo has started a fundraising page to build the first dedicated turtle rescue facility in the UK, to enable them to rescue and to save more turtles by giving them the specialist care that they need, and to ensure that every turtle washed up on a British beach while still alive gets the best possible chance of survival.