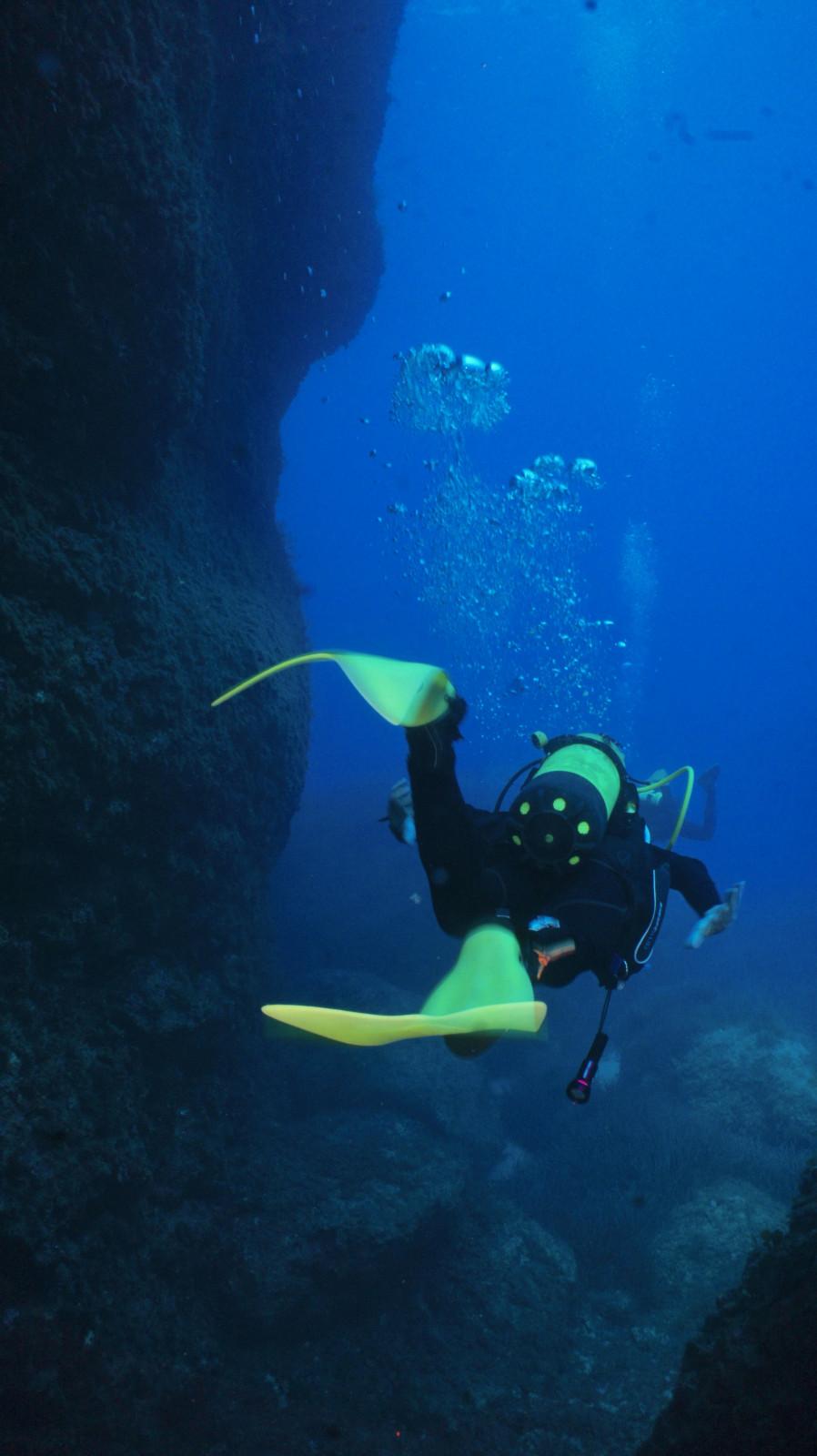 Ask a professional diver what it’s like to dive in any of the Philippines’ best dive spots and you will probably get this response: “We don’t have a school of fish, but a university of fish.” This is no empty boast because it’s substantiated by marine scientific data.

The Philippines belongs to the magnificent Coral Triangle – the “Amazon of the Ocean” – along with Indonesia, Malaysia, Papua New Guinea, the Solomon Islands, and Timor Leste. These warm, tropical waters are home to 600 coral species, 2,000 reef fish species, and six out of the world’s seven species of marine turtles.

Marine biologists have pinpointed the Philippines as the center of this “oceanic Amazon,” making it home to the richest marine ecosystem on our planet. It is also a haven for divers who want to experience arguably the best dive sites in the world. 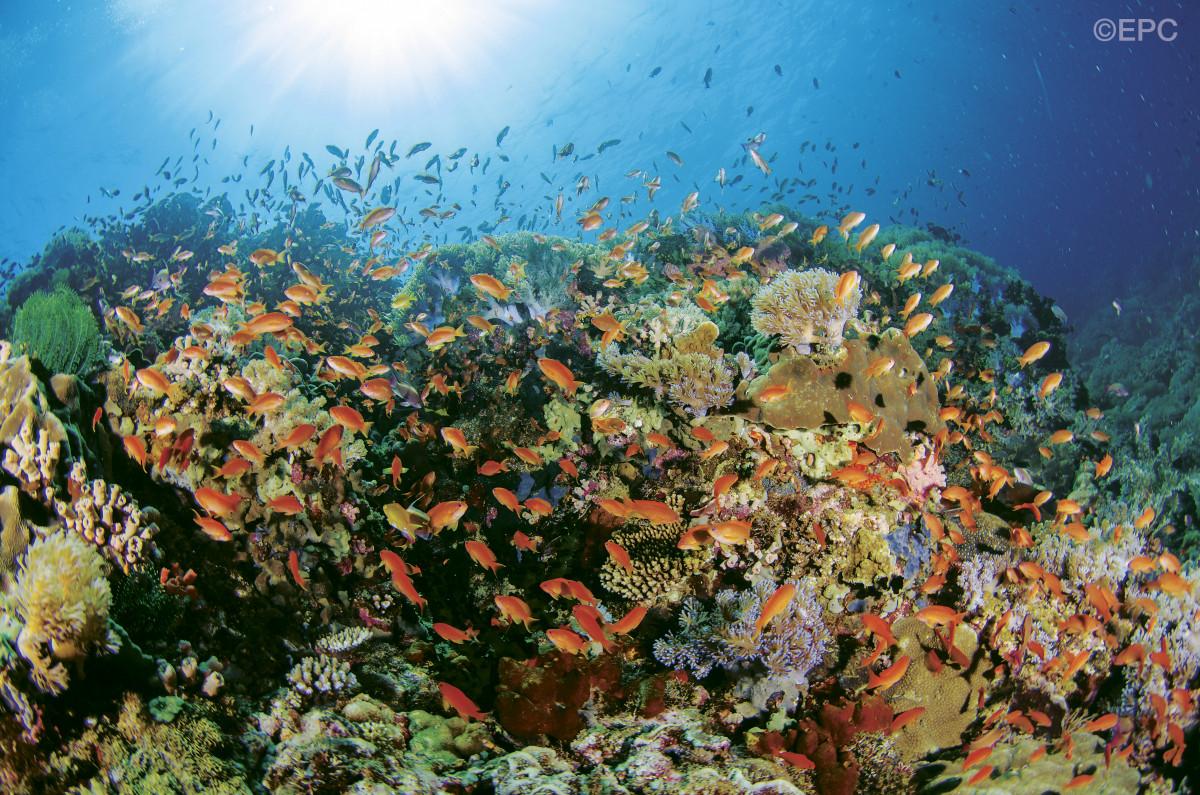 If the Philippines is at the center of the Coral Triangle, then Verde Island Passage is considered the “center of the center,” containing more than half of the country’s fish species. Located in the municipality of Tingloy, Sombrero Island lies in the middle of the Verde Island Passage. When seen from afar, the island resembles a sombrero (straw hat). Behind the island is a dive site called Batoc, which means “nape of neck” in the Filipino dialect. In Batoc, there’s a rich garden of corals filled with tiny, colorful fish called anthias. Other dive sites around Sombrero include Beatrice Rock, Bahura, and Coral Garden, all teeming with marine life. 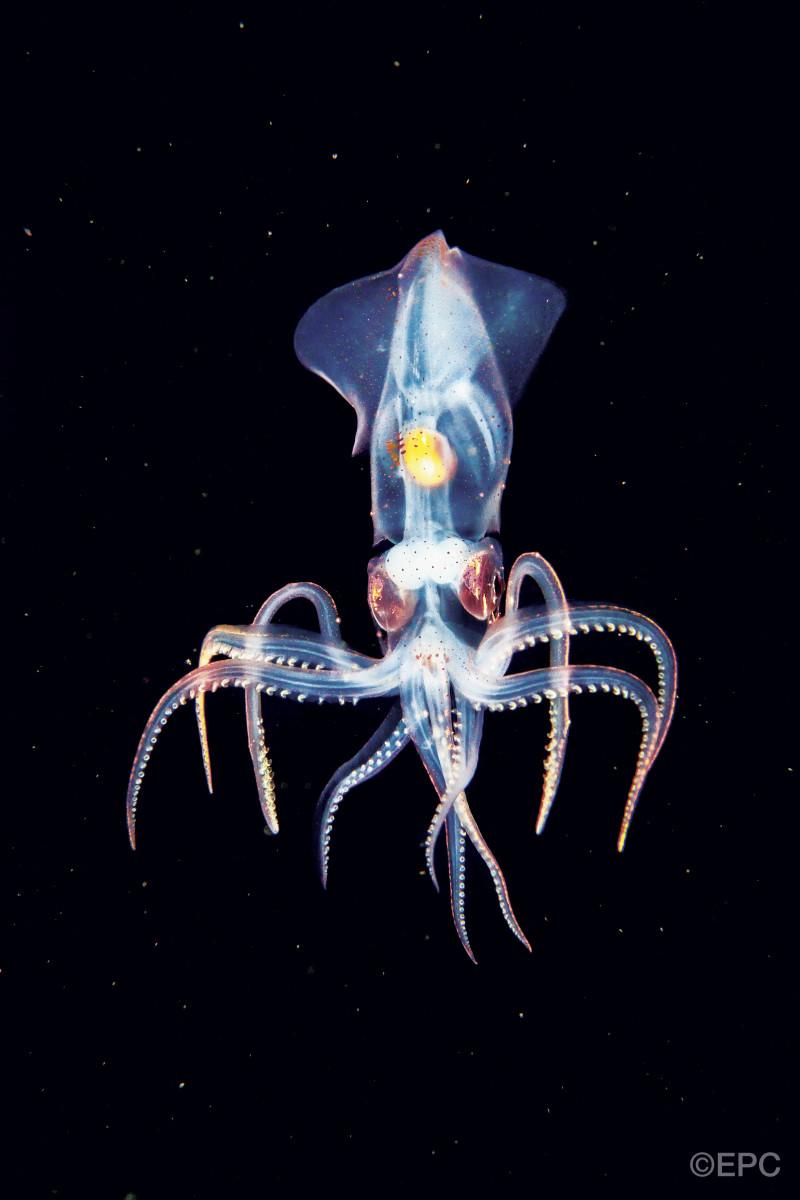 Blackwater enthusiasts go to the huge area in between Mabini and Tingloy—which is at least 300 meters deep—to discover tiny creatures at their strangest larval state. Close to midnight, these creatures make their way up to the surface to feast on plankton. Experienced dive guides bring a 30-meter long line tied from a floater on the surface. Opposite ends of the line are laden with weights to keep it straight, while strong lights are used to attract these creatures from the deep. The line also functions as a lighthouse to guide divers drifting in the black water. 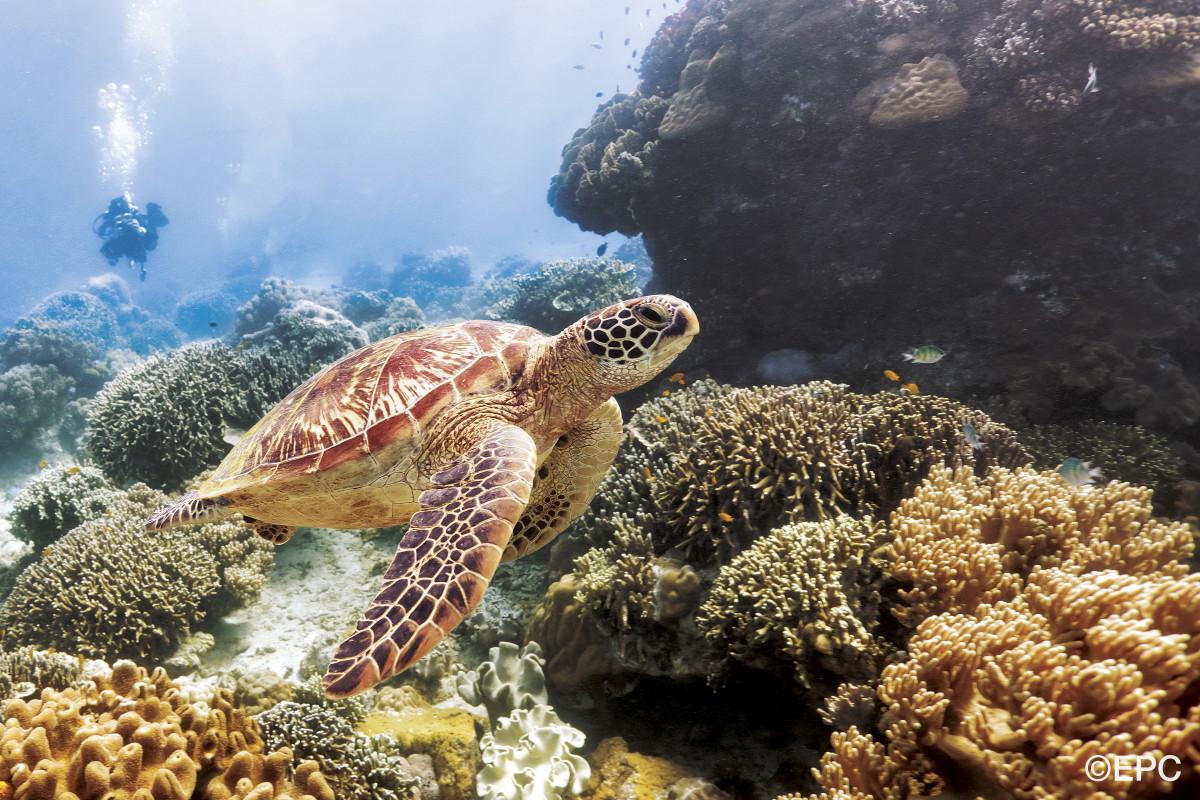 Verde Island is at the center of the Verde Island Passage. Located 400 meters off the southeastern corner of Verde Island, the San Agapito dive site is a sea mount with three peaks, and one of them is actually peeking out of the water. The current here can be extremely strong, so only seasoned scuba divers should explore this area. It has a wall that extends 70 meters deep, and as you descend, the gorgonians (a type of coral) become bigger and bigger. Friendly, juvenile sea turtles do their rounds of eating, breaching, swimming, and sleeping.

Amidst the beautiful coral garden, you’ll also find schools of jacks, emperors, tunas, and groupers lurking around the area. One of the best spectacles is the massive display of red-orange anthias, making it feel like fish are raining all over you. 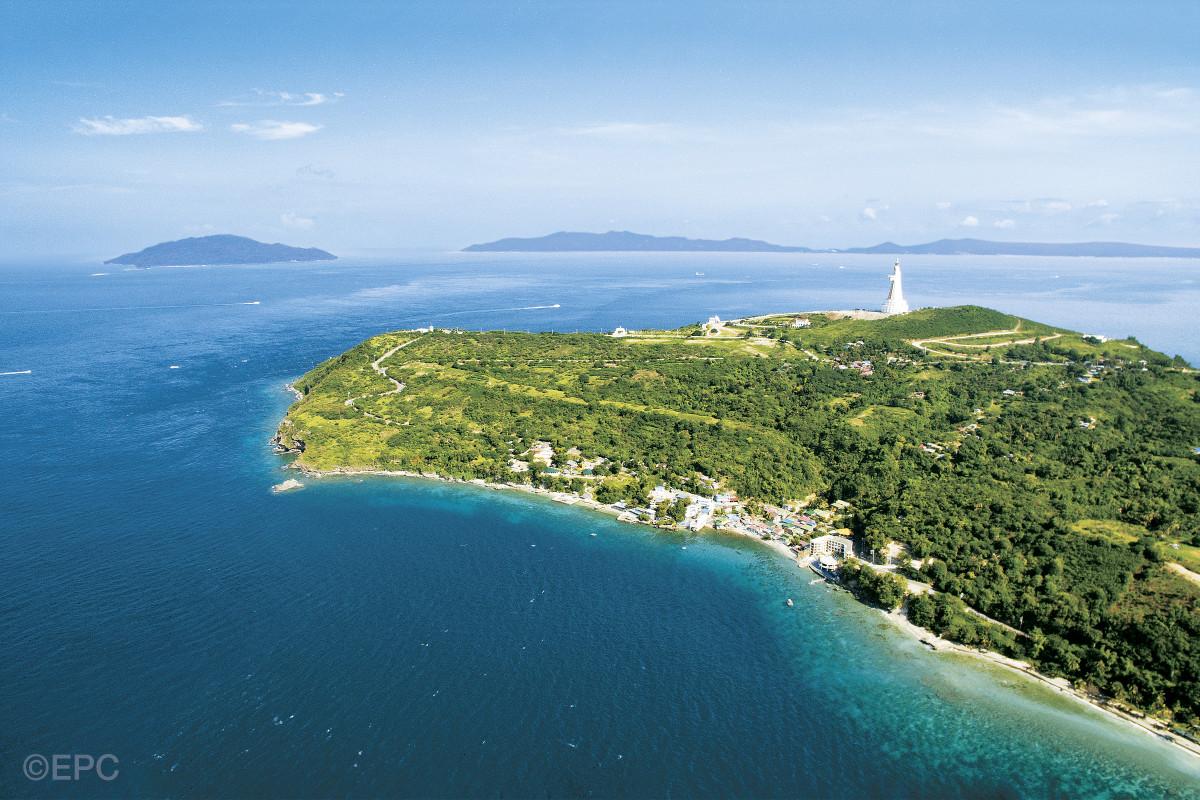 The dive sites in the southeast shoreline of Batangas Bay are classified as “almost untouched,” so one can imagine how pristine they are. Just around the tip of this bay is the “Unli-reef” dive site, named after a long reef where corals can be spotted beginning at five meters deep. This is a site for advanced divers since strong currents are prevalent. 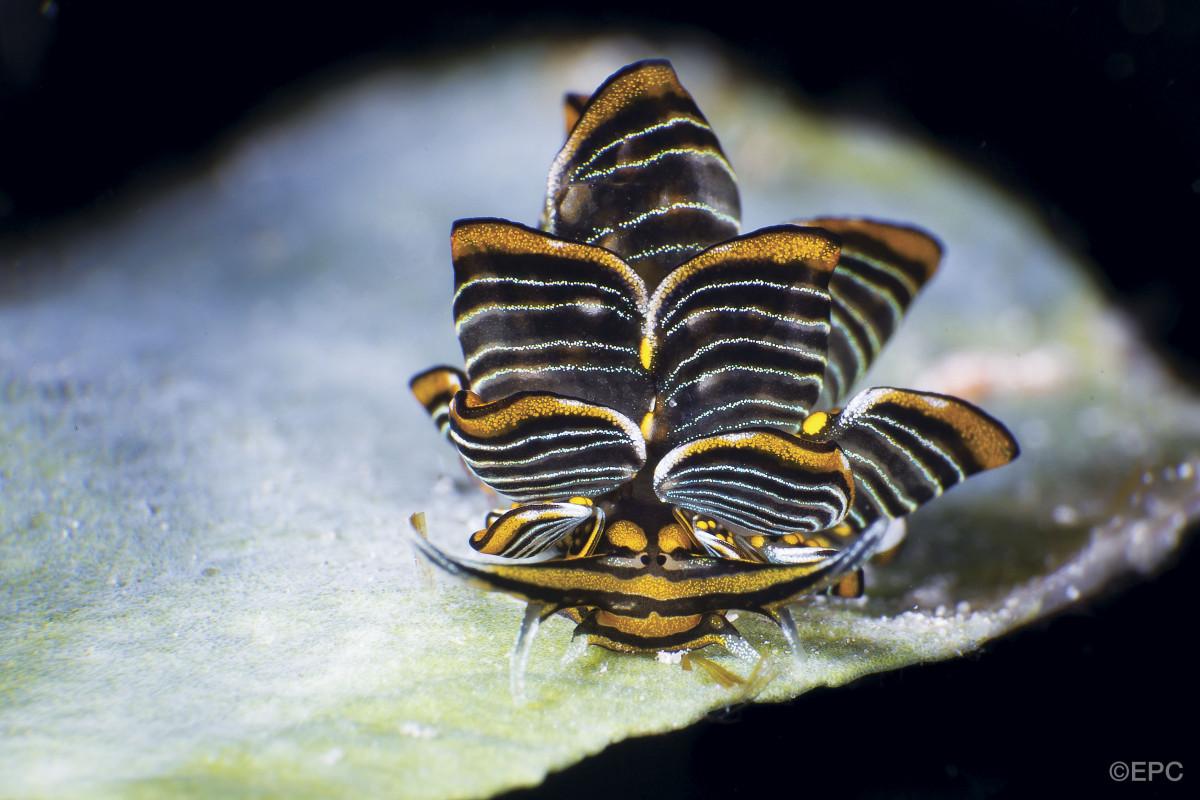 On the far eastern side of the Verde Island Passage is the Romblon group of islands. Local historians say that the name came from the Spanish word ronblon (screw), describing the shape of the main island of Romblon. Divers will find rare and exotic critters on this side of the strait. 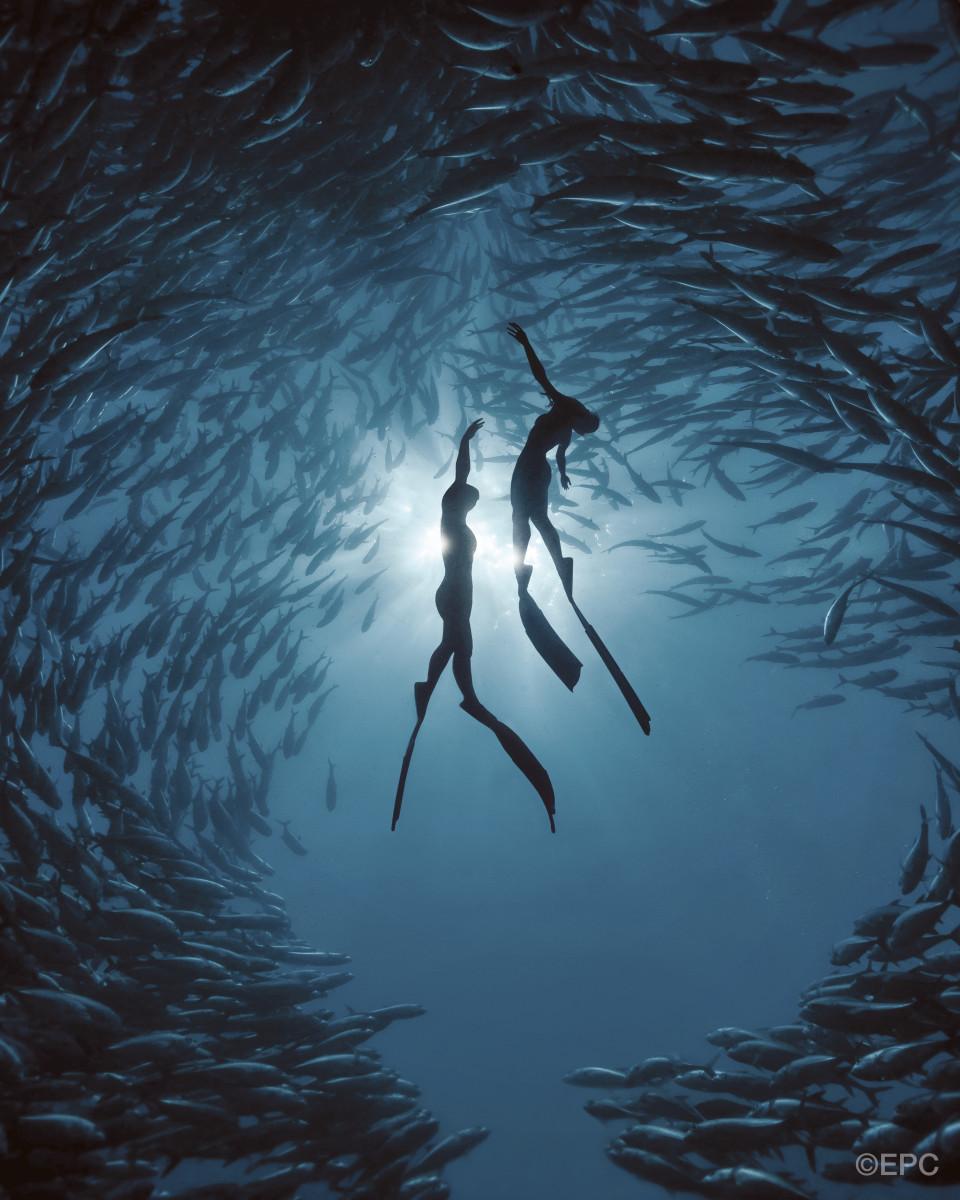 Bohol, an island province in the Visayas region, is popular for its beautiful beaches, resorts, and unique wildlife. At its southwestern tip is Panglao Island, which has at least 12 dive sites accessible via its shoreline. Panglao is also the jump-off point to Balicasag Island, which has been declared a marine sanctuary since 1985. On every dive here, you’ll find friendly sea turtles and a school of jacks so huge and plentiful, the locals call it the “university of jacks.”

There are several spectacular dive sites around Balicasag but Black Forest and the Cathedral are a must for divers. Black Forest got its name from having an abundance of black corals at its sea floor, around 40 meters deep with different species of corals, barracudas, wrasses, moorish idols, garden eels, trumpet fish, puffers, and more.

The Cathedral Wall is famous for being a magnificent sight when you witness the sun’s rays peeking through its cracks. Divers are advised to bring a torch on this dive site to see some surprises hiding within its walls like snappers, surgeonfish, butterfly fish, mackerels, angelfish, and barracudas. 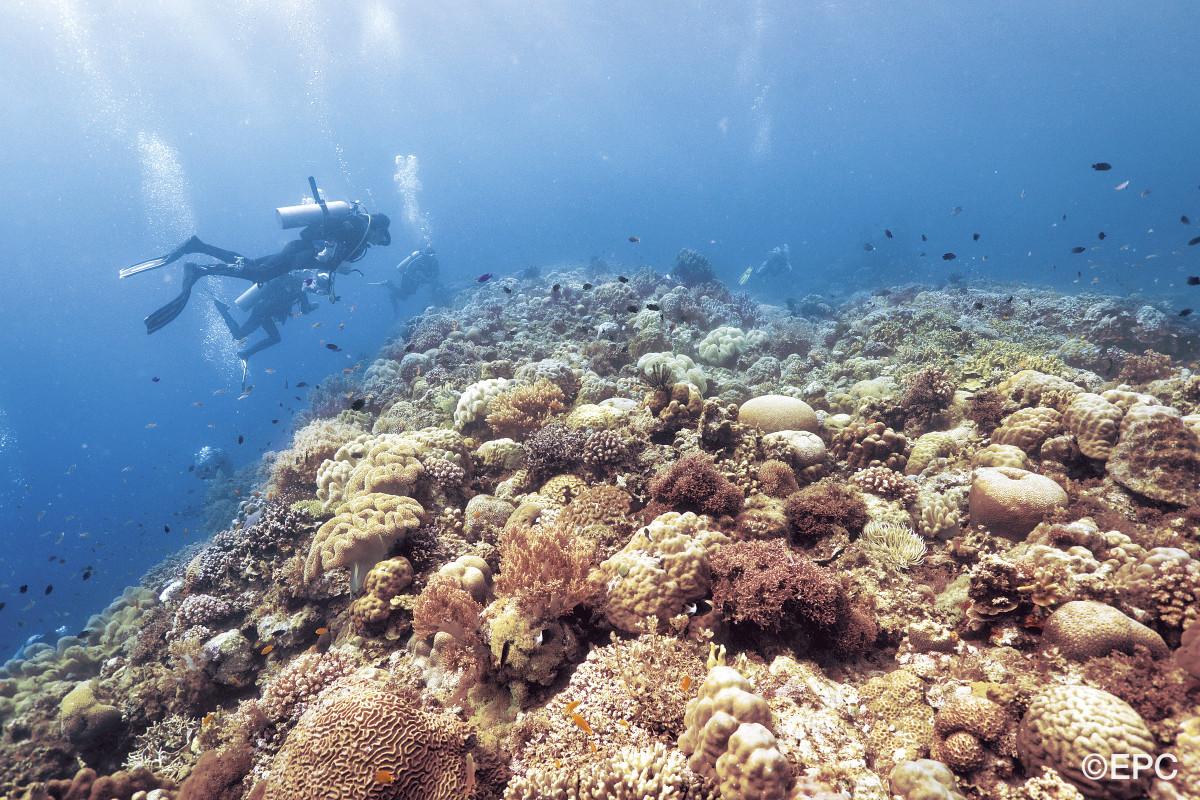 On the westernmost side of Bohol is Cabilao Island that lies along the Cebu strait. The island has been a marine reserve since 1978 and it has two marine protected areas that are designated as “no-take zones.” At least a dozen dive sites surround the island, most of which are classified as “undisturbed.” 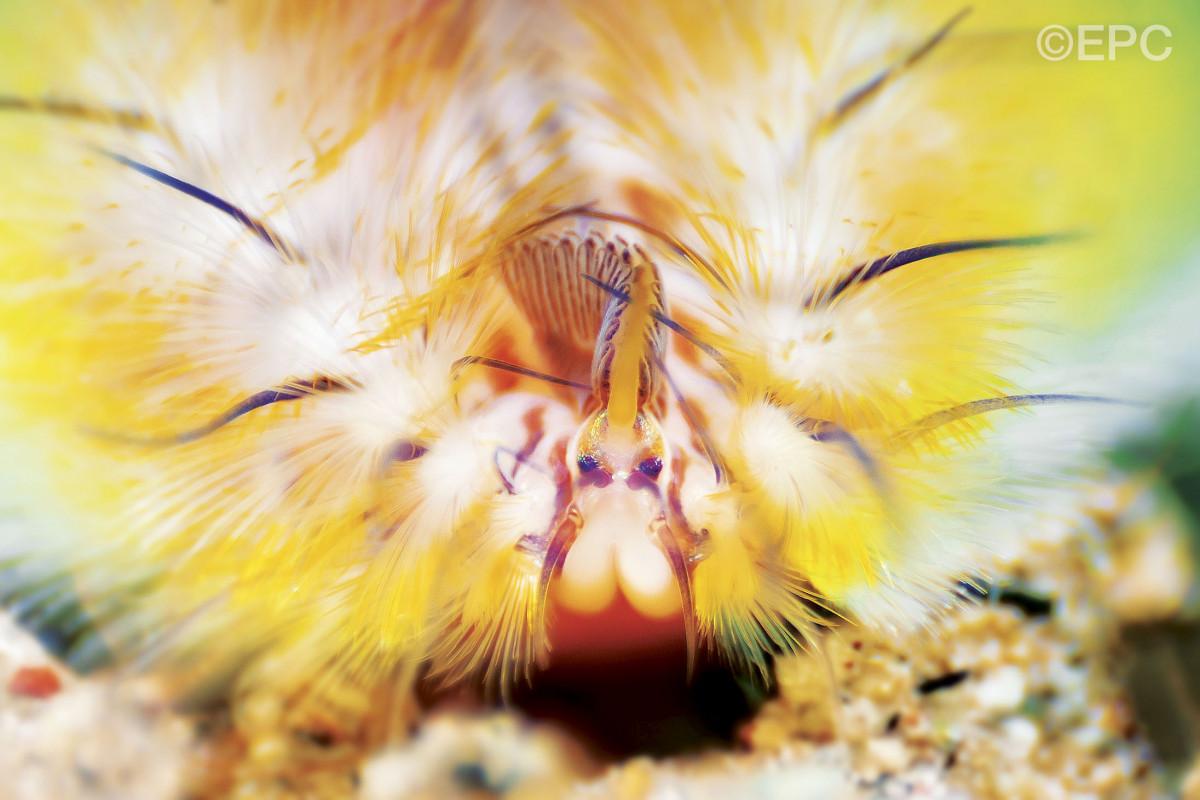 The coastal town of Dauin is located approximately 20 kilometers south of Dumaguete (the capital of Negros Oriental province). While Dumaguete and Dauin are in different locations, their names have become synonymous with scuba diving.

Along Dauin’s shores, you’ll find 18 popular dive sites, most of which are known for coral and muck diving. Scuba diving is the primary industry in this town and it extends all the way up to the Apo Island Marine Sanctuary, located about 10 kilometers southeast of Dauin.

Apo Island has nine excellent dive sites around it. At its southwestern side is the Rock Point West, where you’ll find a wide coral garden around five meters deep, which eventually slopes down to 20 meters. Snappers, butterfly fish, groupers, frogfish, nudibranchs, and sea turtles are just some of the sea creatures you’ll encounter here. Being a protected marine sanctuary since the 1980s, Apo Island has some of the friendliest sea turtles. 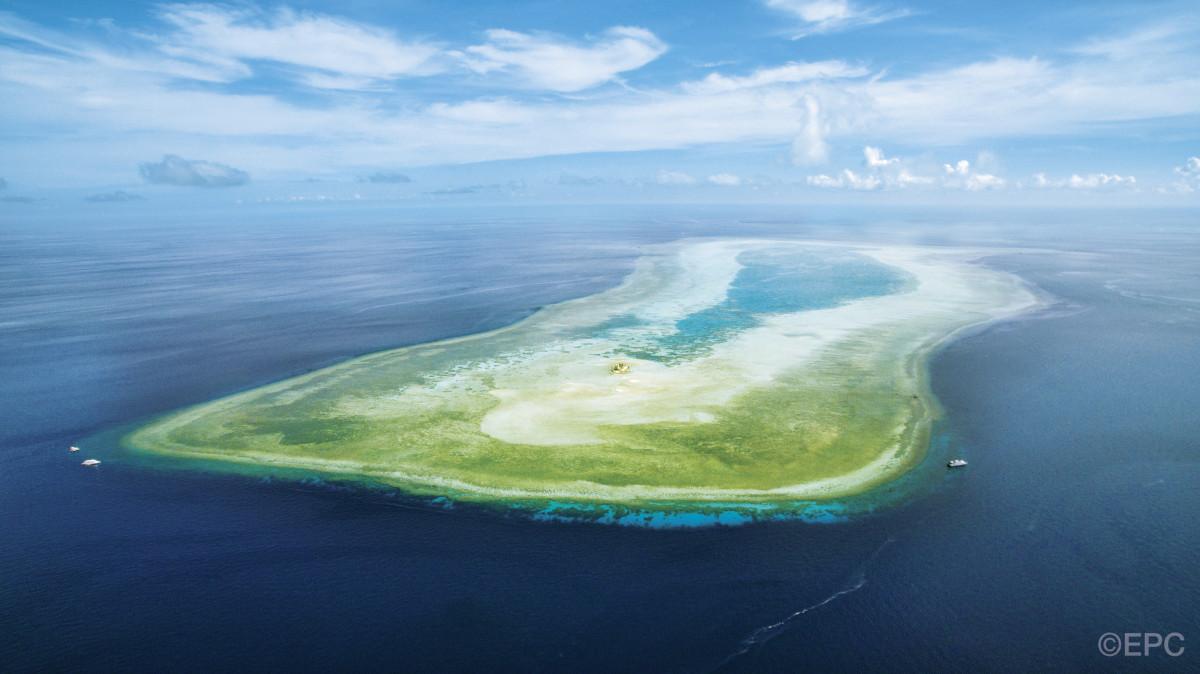 At the center of the Sulu Sea, you’ll find the Tubbataha Reefs Natural Park, which comprises 130,000 hectares of awe-inspiring marine biodiversity. It is located in between the Visayas region and the island of Palawan. How unique and precious are these vast reefs? They are classified as a UNESCO World Heritage Site and a Ramsar Site (sites that are recognized as important to the world’s biological diversity). The Philippines is among the world’s top 15 fishing nations, and areas like Tubbataha contribute to food and livelihood for millions of people.

Scuba divers can only visit Tubbataha from mid-March to mid-June. There are no resorts; only liveaboard boats. The Tubbataha Reefs are made up of two huge coral atolls called the North and South Atoll, plus a smaller coral structure called the Jessie Beazley Reef, found northwest of the North Atoll. 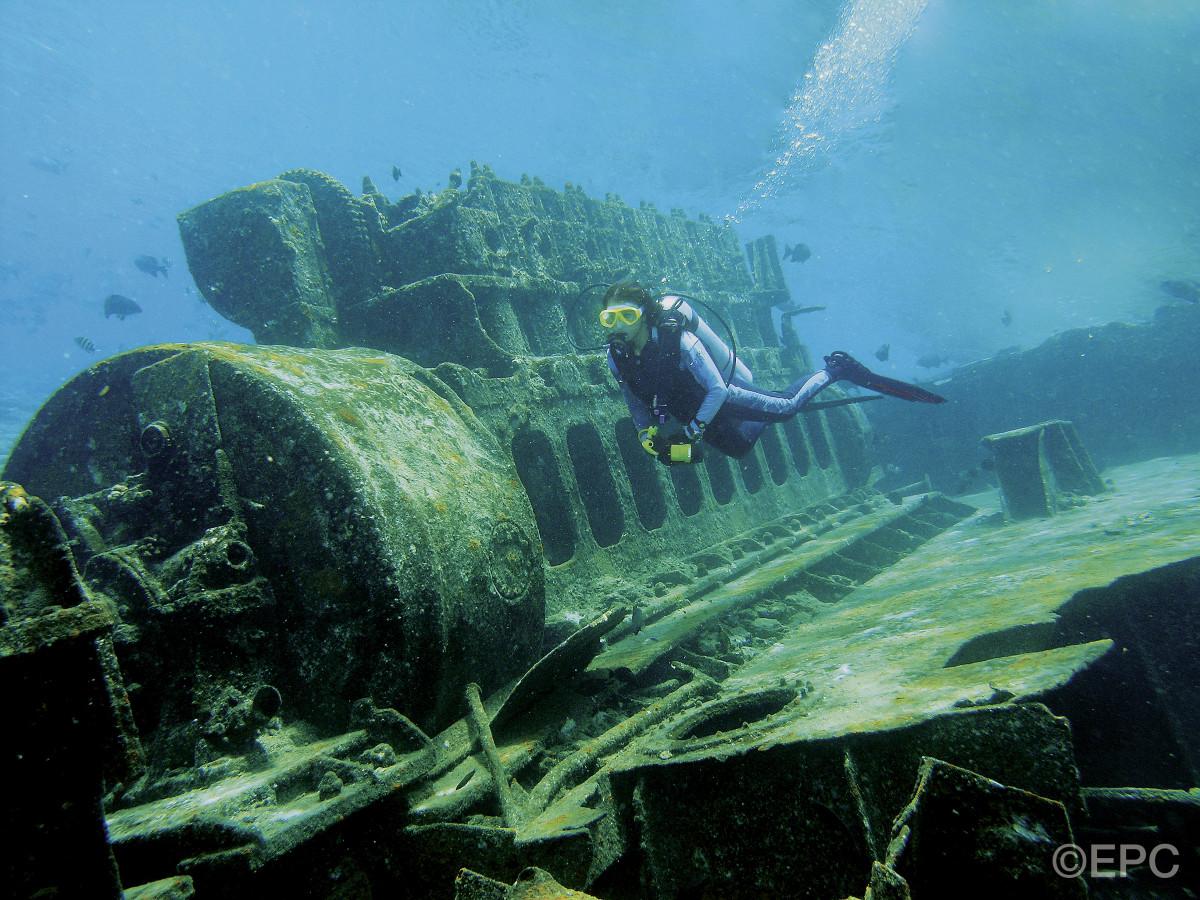 The Delsan Wreck is one of the best dive sites in the South Atoll. Just beyond the Delsan Wreck is the drop-off called the Delsan Wall. Many divers refer to the Delsan Wall dive as their Disneyland, their “happiest place on earth.” Most of the dives here take place by its huge wall where you will have the chance to meet several shark and ray species. These range from white tip sharks, tiger sharks, whale sharks, and hammerheads, to manta rays, devil rays, and eagle rays.