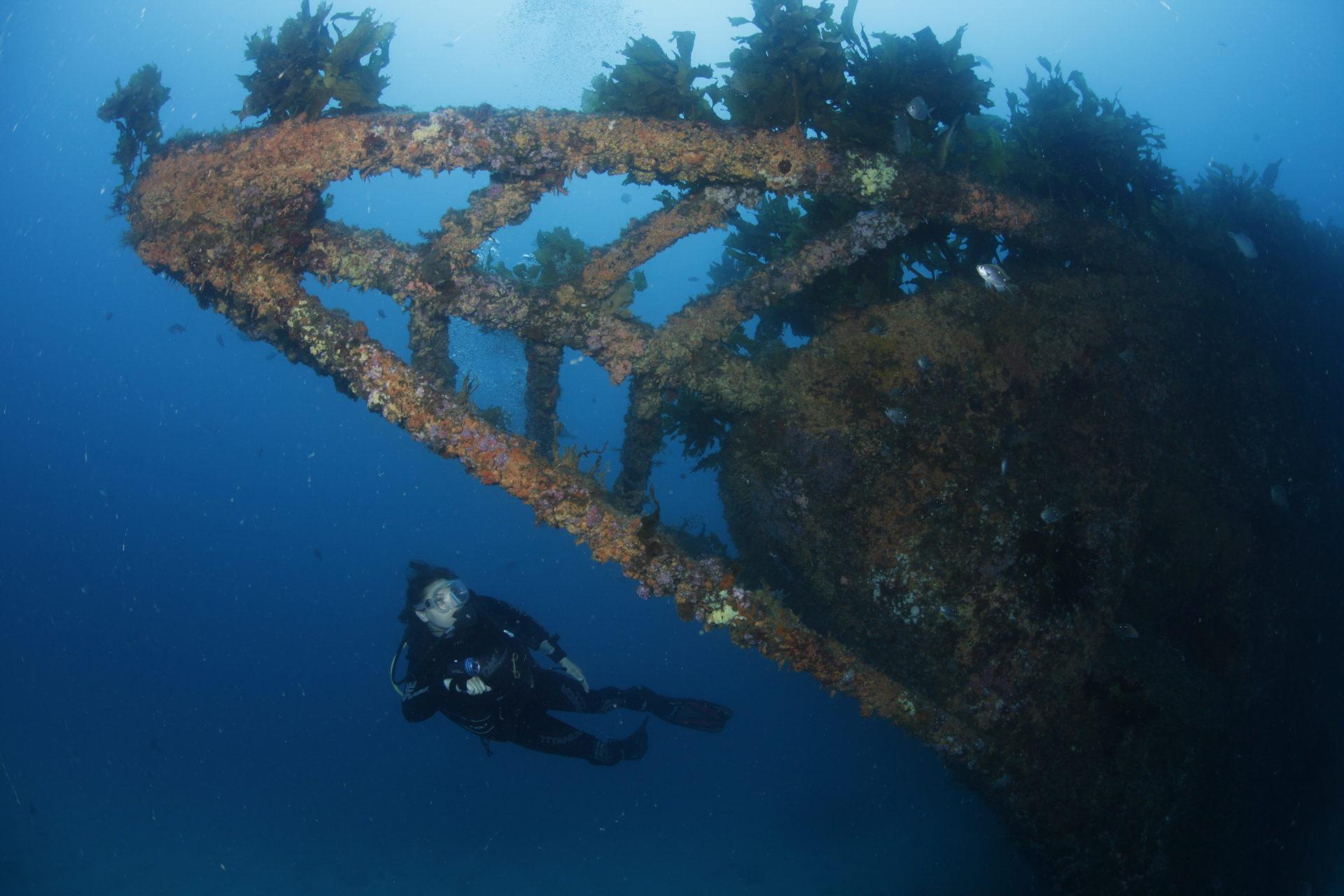 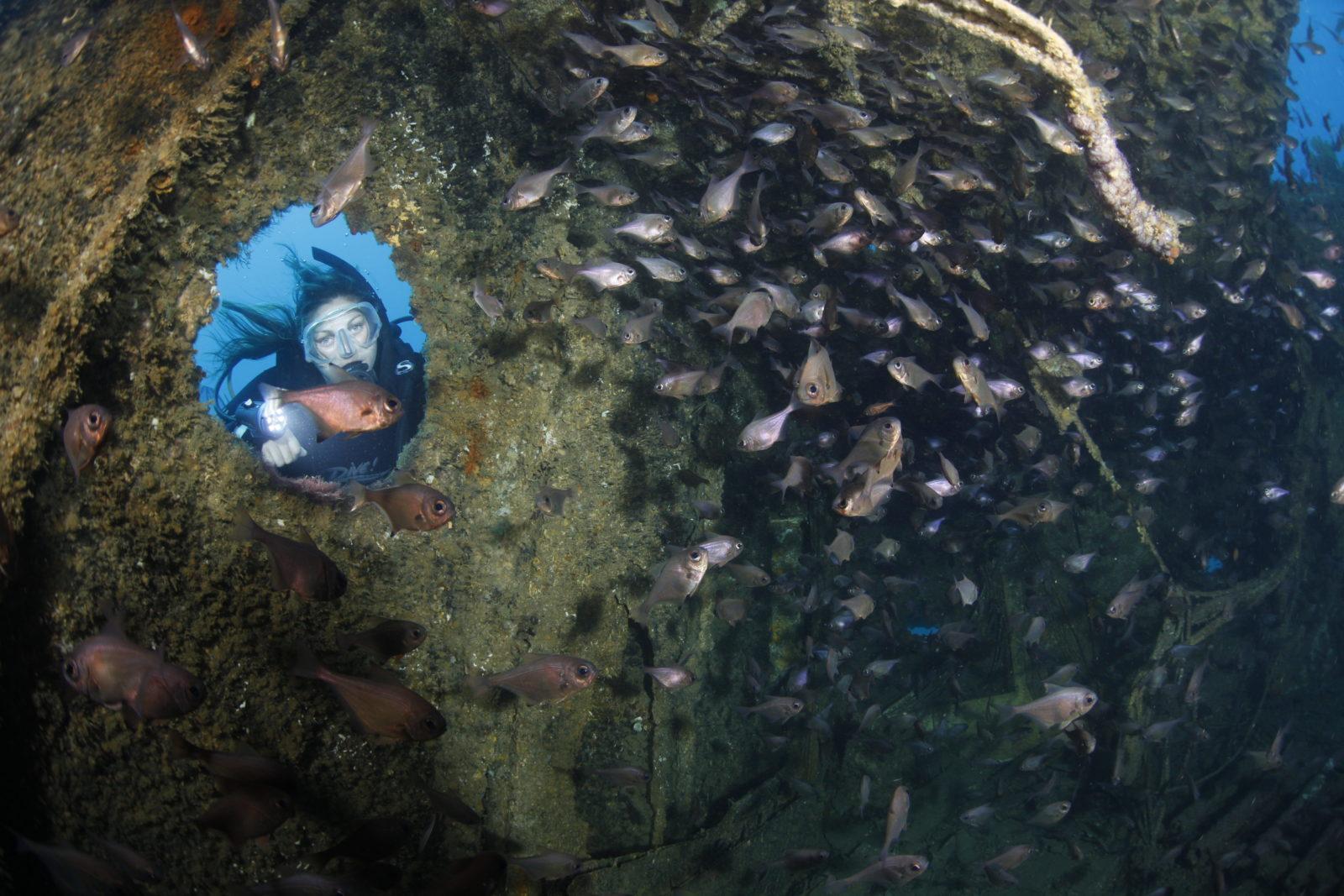 Just before midnight on July 10th 1985, members of a relatively obscure environmental organisation were on board their flagship vessel, Rainbow Warrior, sat tied to Marsden Wharf in Auckland harbour. The organisation now known as Greenpeace, started as an anti-nuclear movement in 1969, protesting US nuclear testing in Amchitka, Alaska.

Sixteen years on, and with a newly minted flagship at the forefront of their anti-nuclear movement, it was the French who drew the attention of Greenpeace leadership. Their vessel painted with rainbow peace dove, the crew of the Rainbow Warrior were preparing a voyage to Mururoa Atoll in French Polynesia to protest French nuclear testing at the site. As the crew slept, or sat quietly sharing a beer, a limpet mine exploded on the port side hull, strategically placed outside the engine room. 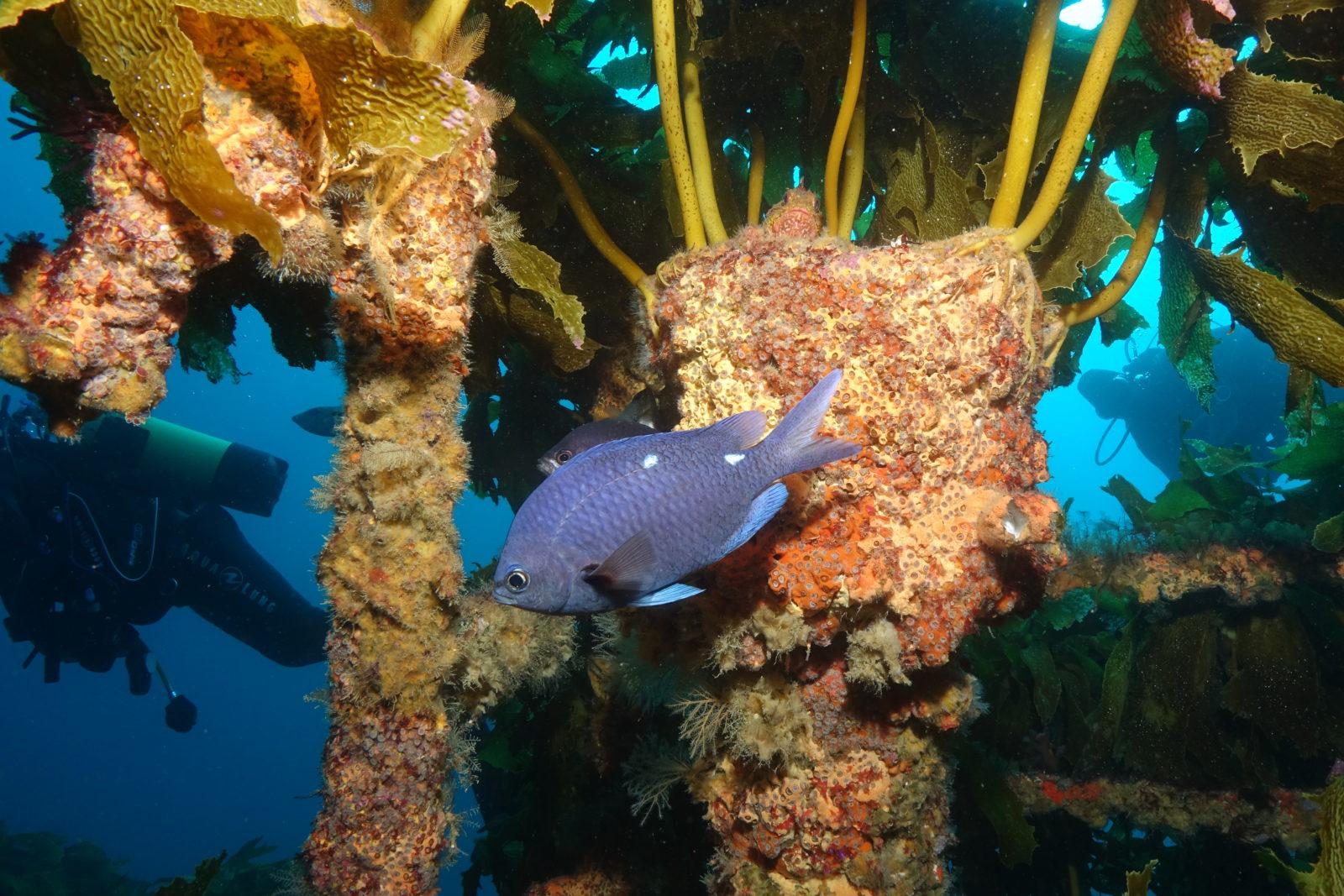 The crew felt the shudder, as the lights extinguished, and they could hear a sudden rush of water. Despite the confusion that ensued, all members of the crew evacuated the vessel onto the wharf. Except one. Amid the chaos, Portugese-Dutch photographer, Fernando Pereira, went to retrieve his camera equipment. Tragically, a second mine then exploded. It was placed above the propeller, and right underneath Pereira’s quarters. The photographer died inside the vessel, as it was inundated and sank to the bottom.

The visuals that were beamed across New Zealand, and the world, were stunning. The peace dove painted on the hull of the Rainbow Warrior, barely visible above the water line. The Greenpeace flagship sat partially submerged, masts strewn across the wharf. Details would emerge slowly at first and more rapidly once two French agents were caught returning their campervan at Auckland airport. 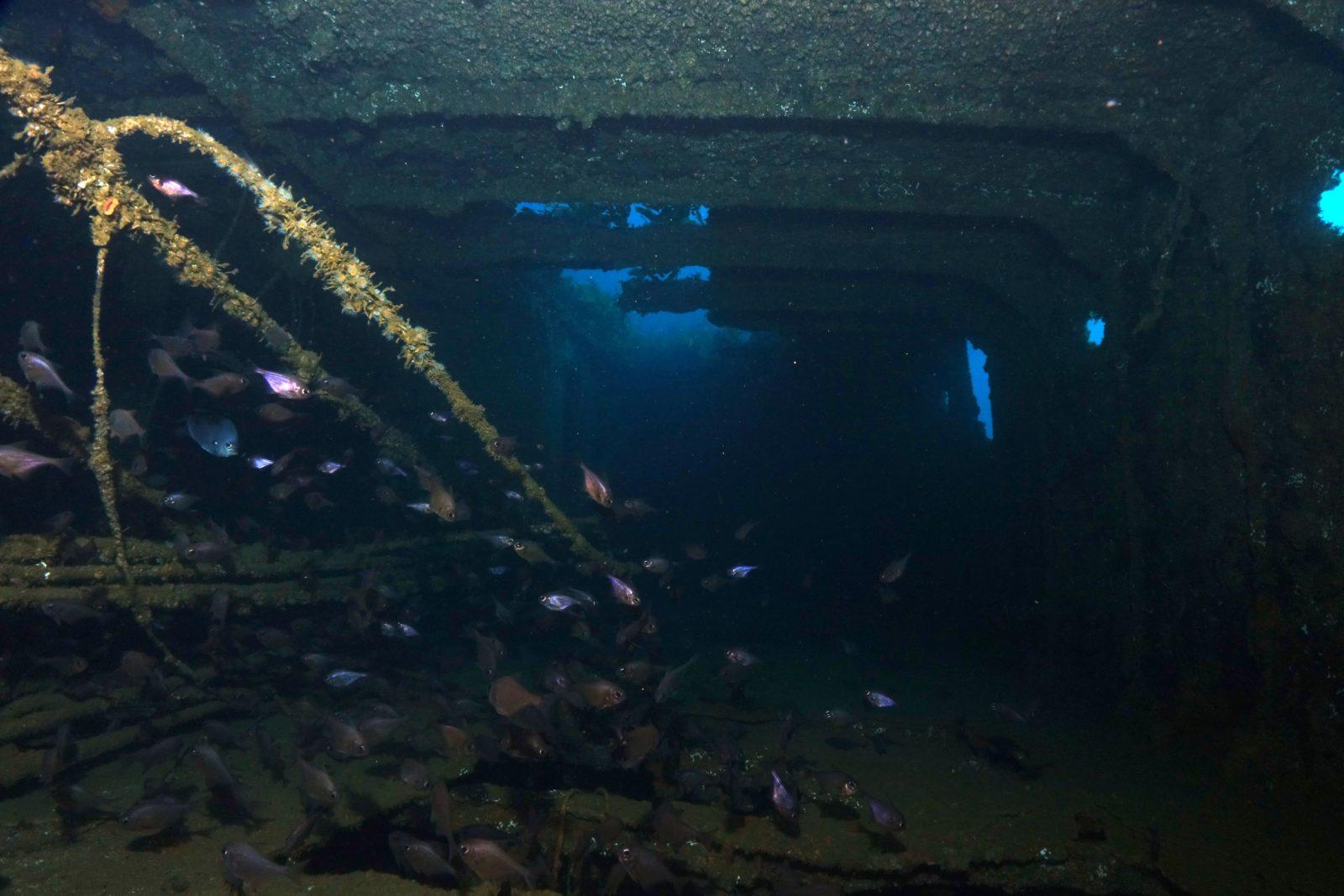 The picture painted one of the most brazen acts of espionage perpetrated by a foreign government in New Zealand territory. The political fallout lead to fervent anti-nuclear and anti-French protests in New Zealand and abroad. While the bombing of the Rainbow Warrior became a pivotal moment in the government’s “Nuclear-Free New Zealand” policy, which persists to this very day. Greenpeace were shattered with the senseless loss of life. Ironically, however, the coverage propelled the organisation into a global spotlight. One they were able to use to shed light on their causes, particularly their anti-nuclear protests.

Once the Rainbow Warrior was re-floated and the investigation was complete, Greenpeace faced the difficult decision of what to do with their once-prized vessel. Eventually a decision was made that she would remain in New Zealand, and would become an integral part of the environment she sought to protect. 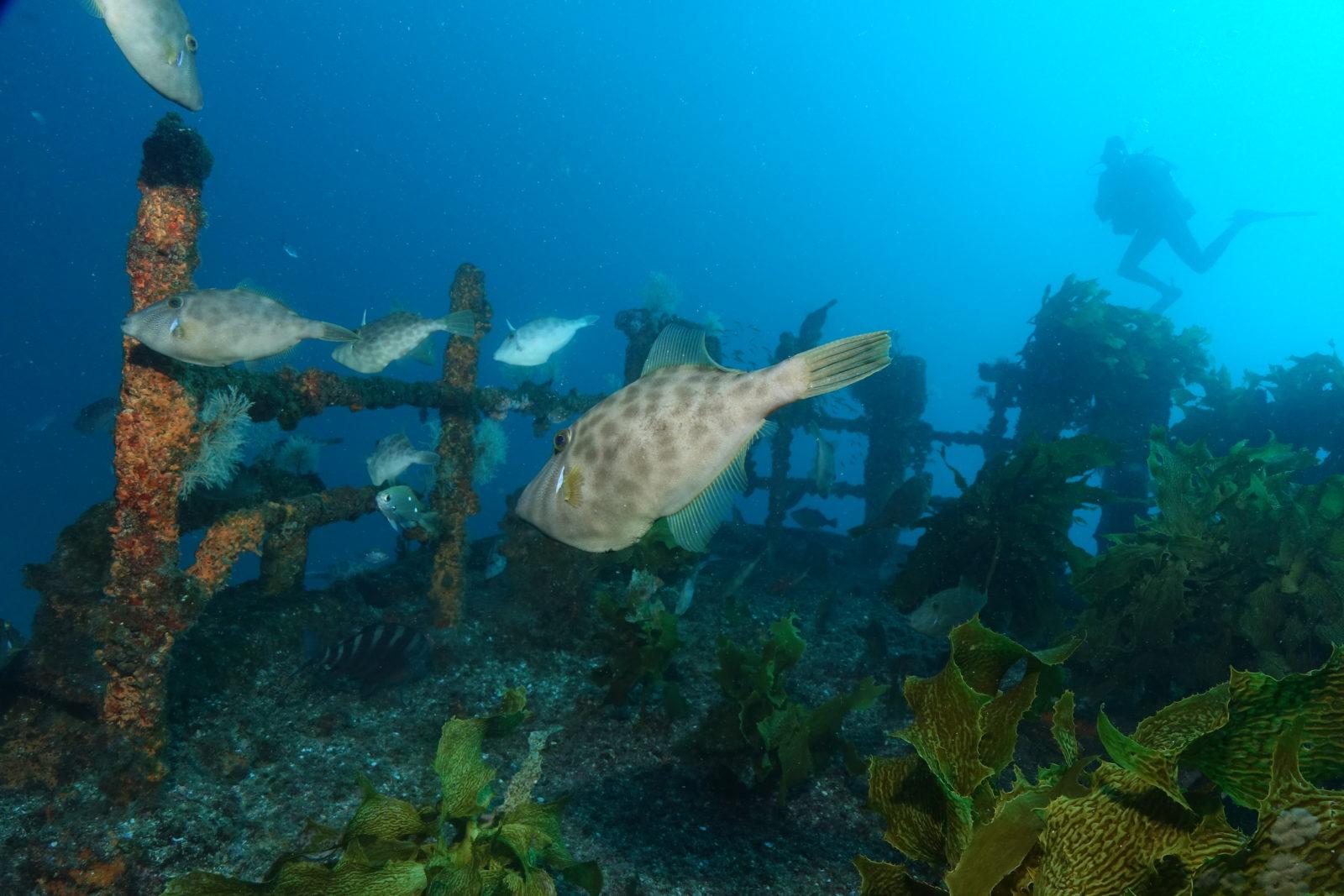 Just over 250kms North of Auckland, in the beautiful Bay of Islands, lies the quaint coastal town of Paihia. It is here that our journey to dive the Rainbow Warrior starts. Meeting at Paihia Dive shop in the centre of town, we travel the windy, but scenic, 56kms to Matauri Bay by road. As we round the escarpment, the postcard beauty of the Cavalli Islands comes into view. Looking down we see a campground fringed with white sandy beach and rows of Norfolk pines. The bluff at the end of the beach shows glimpses of the memorial to the Rainbow Warrior, built by local artist Chris Booth and incorporating the ship’s propeller. 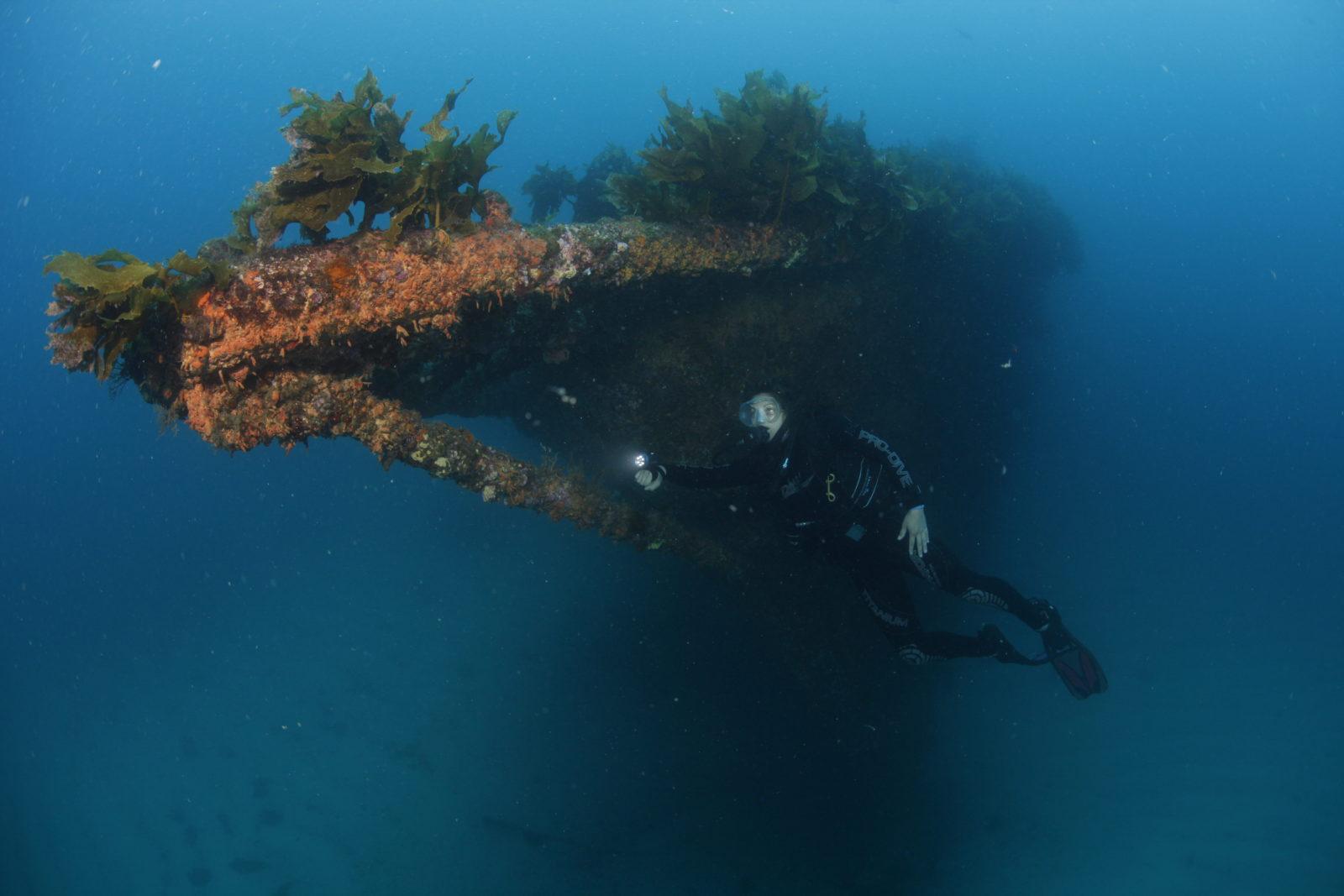 Once our equipment is setup and our 8m rigid inflatable is prepared, we launch off the beach using a rustic ex-farm tractor. Within 10 minutes we are hooked up to the mooring line that is anchored to a mooring block, 10m behind the wreck. Through the dive briefing we learn that the wreck sits in 26m of water and lists slightly towards starboard side.

At 40m long and, with masts removed, standing only 8m tall, the Rainbow Warrior is not the largest of wrecks. This bodes well for seeing the majority of the wreck in a single dive. We are informed of the potential penetration options and respectfully, the part of the wreck we are asked not to enter. This of course being the room where Fernando Pereria lost his life. 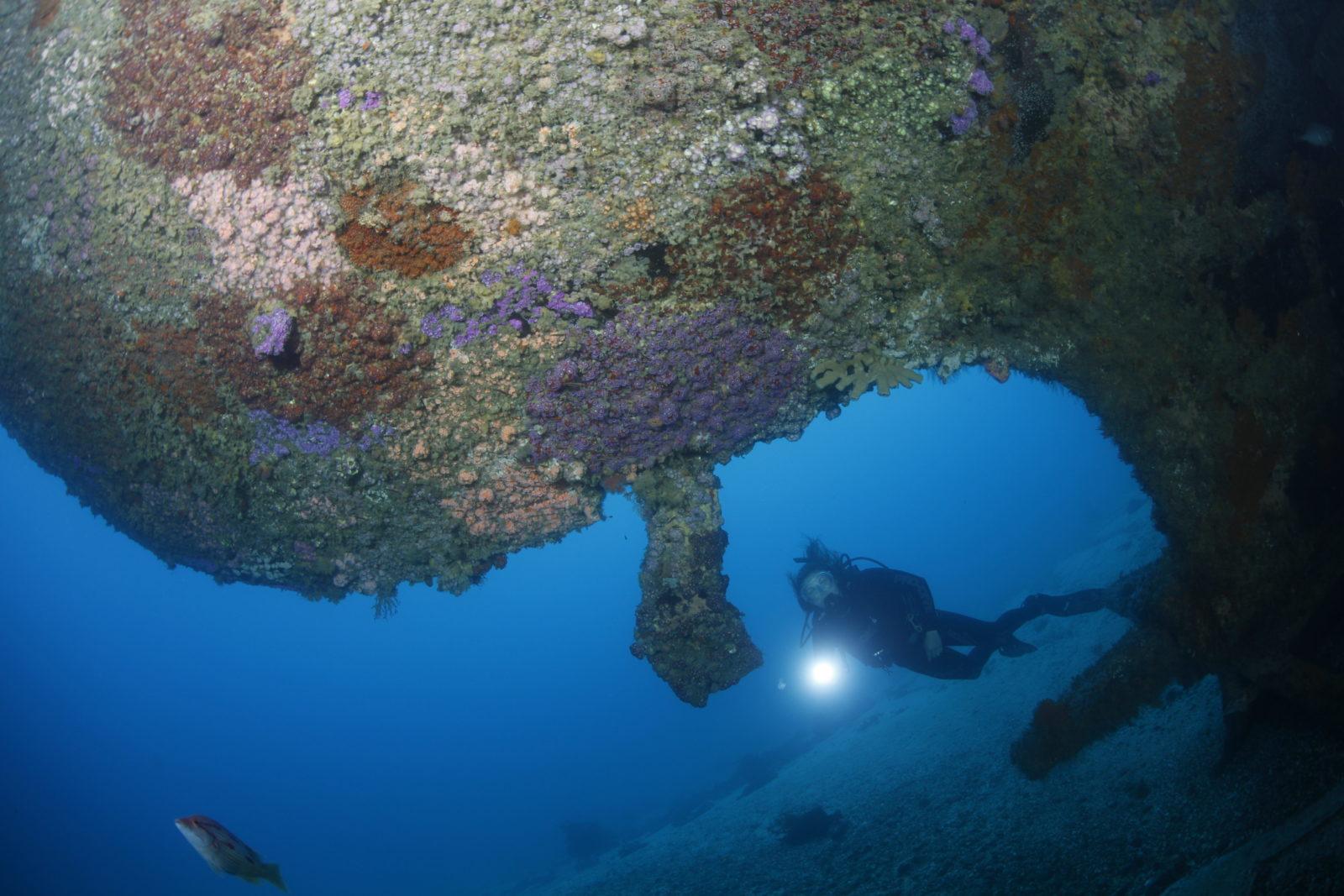 As we descend the mooring line, it is clear that the surface currents have positioned our dive boat so as to prevent an early glimpse of the wreck. Arriving at the mooring block at 25m, we turn towards the shadow that betrays the wrecks’ position. First encountering the stern of the Rainbow Warrior, we are immediately faced with the propeller shaft. The knowledge that this is the area where a limpet mine exploded and took the life of Pereria lingers, despite little evidence of a blast hole being visible.

Soon, however, another realisation dawns. After 33 years sat below the waves, the hull has been colonised by another rainbow of sorts. Encrusting invertebrates have completely covered the starboard side of the wreck, aided by the shade generated by the gentle list. Jewel anemones, encrusting sponges, bryozoans, hydrozoans and tube worms form the colourful playground for nudibranchs, triplefins, blennies, molluscs and reef fish. 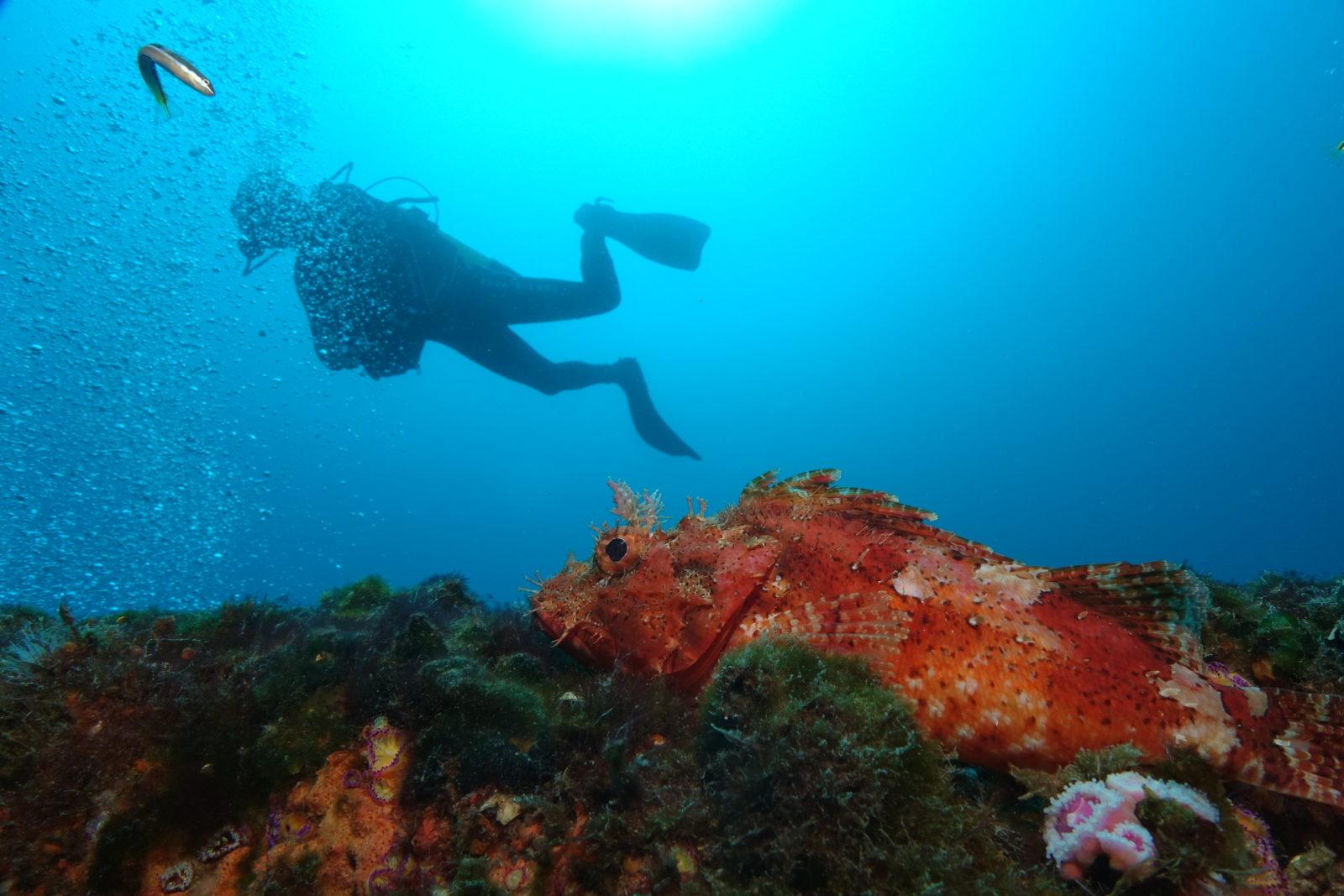 As we travel along the starboard side exploring the macro life, we happen upon three rectangular holes in the hull. Too regular to be blast damage, we are later told these were the holes cut in the hull for the purpose of scuttling. A process that took two and a half hours, as water was slowly pumped into the vessel.

Greenpeace were understandably loathed to use explosives on the Rainbow Warrior. As we poke our head inside the wreck, two large Kingfish (Seriola lalandi) bee-line for the exit above. Apparently more frigid than the grey moray eels (Gymnothorax nubilis) that were seemingly guarding the entry to the wreck. From here, heading off the starboard side of the wreck we encounter a small debris field. 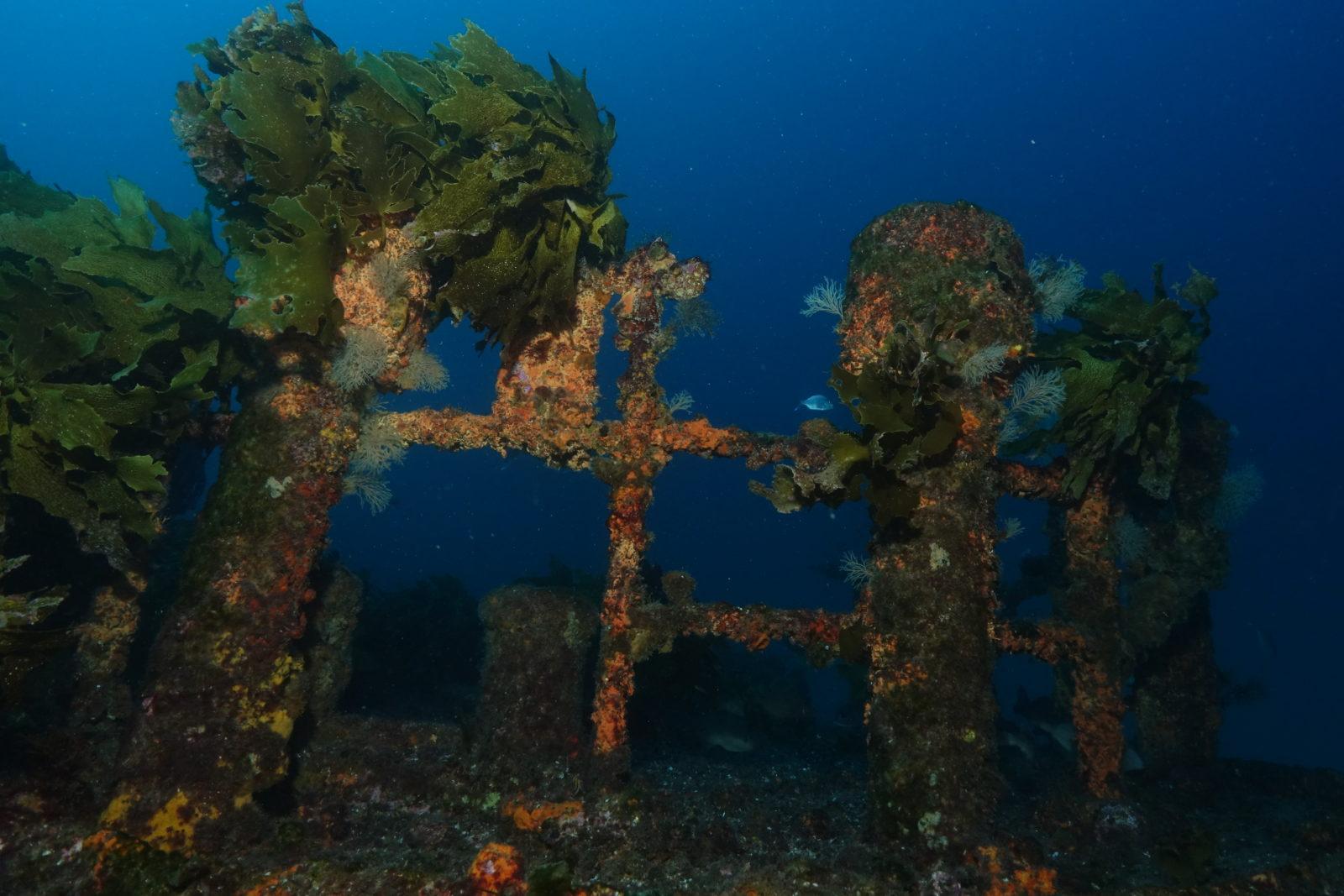 Approaching the bow of the wreck, we are prompted to swim further out in front and turn to look back. What a majestic sight we are faced with. The Rainbow Warrior, in all her glory, seemed as though she were crashing a wave and bearing down on us, as if we were driftwood, bobbing directly in her path. The open beams of the bow sprit form a sharp focal point. The underside of which are again covered with encrusting invertebrates. 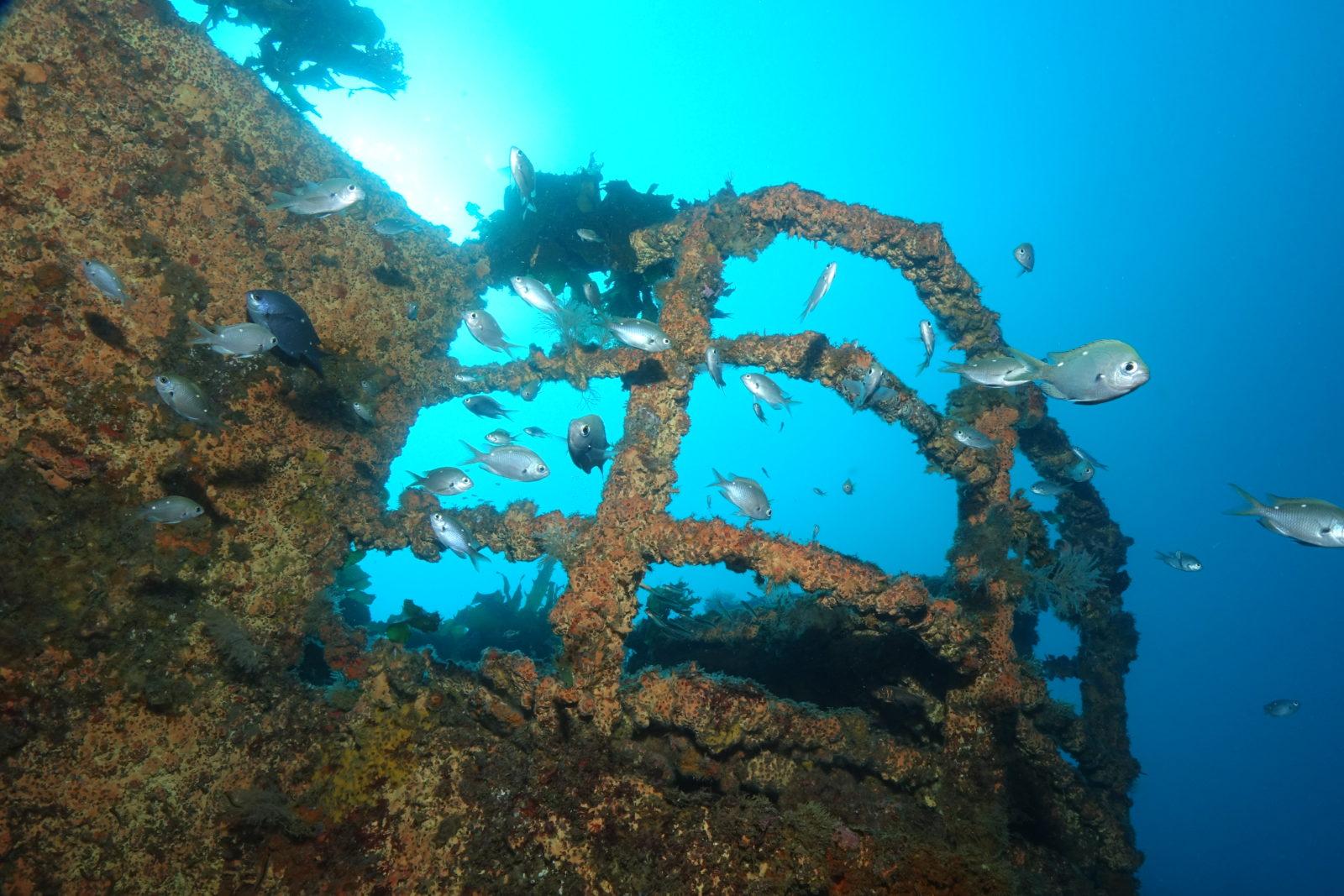 This area of the wreck seems to be a great place to find the shy but curious and very photogenic crested blenny (Parablennius laticlavius). With a body enclosed in it’s barnacle hideaway and only it’s head showing, the crown-like filaments above each eye make it a wonderful macro subject. A little further along the foredeck we encounter the dazzling pink of a Jason mirabilis nudibranch, perched high up on his hydroid food source. A great opportunity for a lovely blue or black-backed photograph.

Around the foredeck area, we took the opportunity to swim along an open passageway on the starboard side. We spotted both Yellow (Gymnothorax prasinus) and Grey (G. nubilus) morays, Northern scorpionfish (Scorpaena cardinalis), dwarf scorpionfish (Scorpaena papillosa) and the as-yet undescribed New Zealand half-banded perch (Hypoplectrodes sp.). The passageway ended with an open-door leading to a room. One that we would not enter out of respect. 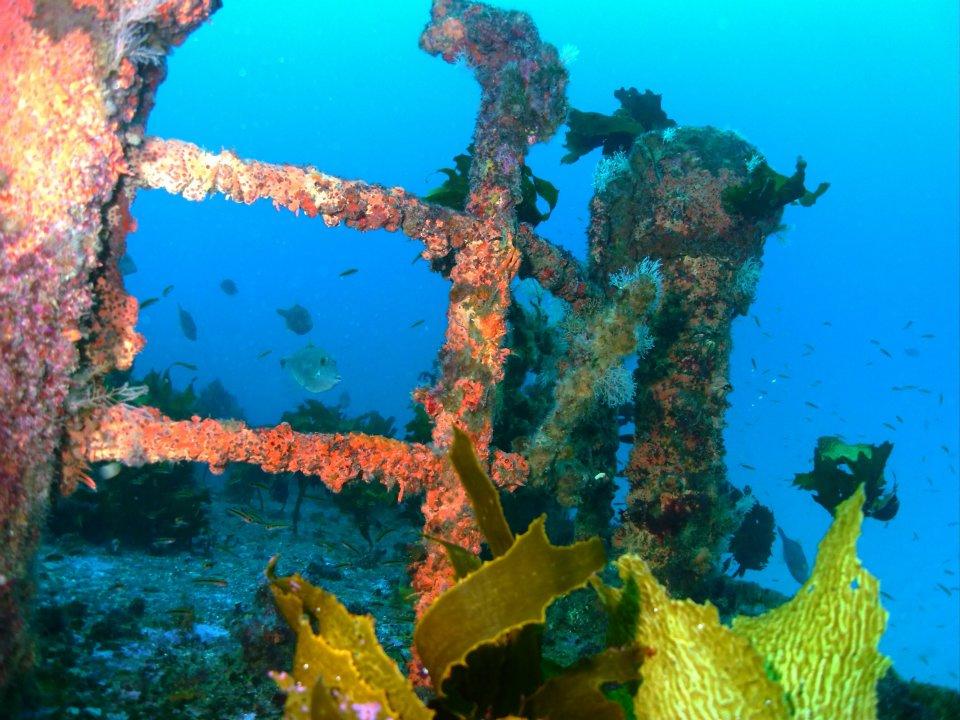 Rounding the stern and heading along the sunny port side of the wreck, the ecklonia kelp strands swayed with the movement of the water. Craig, our eagle-eyed guide, spotted a small piece of broken off kelp and got quite excited. Of course, this perfect mimic was not kelp at all, but the elusive crested weedfish (Cristiceps aurantiacus). Fortunately, the audacious little guy sat up proudly for a single photo before disappearing without a trace.

As we arrived back at the foredeck, just forward of the bridge, we entered inside the Rainbow Warrior for the first time. Having heard the history of the wreck before diving it, the spookiness was amplified upon seeing what probably was natural decay of the ship’s steel construction. Low-hanging pipes and piles of rubble, easily imagined as after-effects of purposely-detonated explosives. 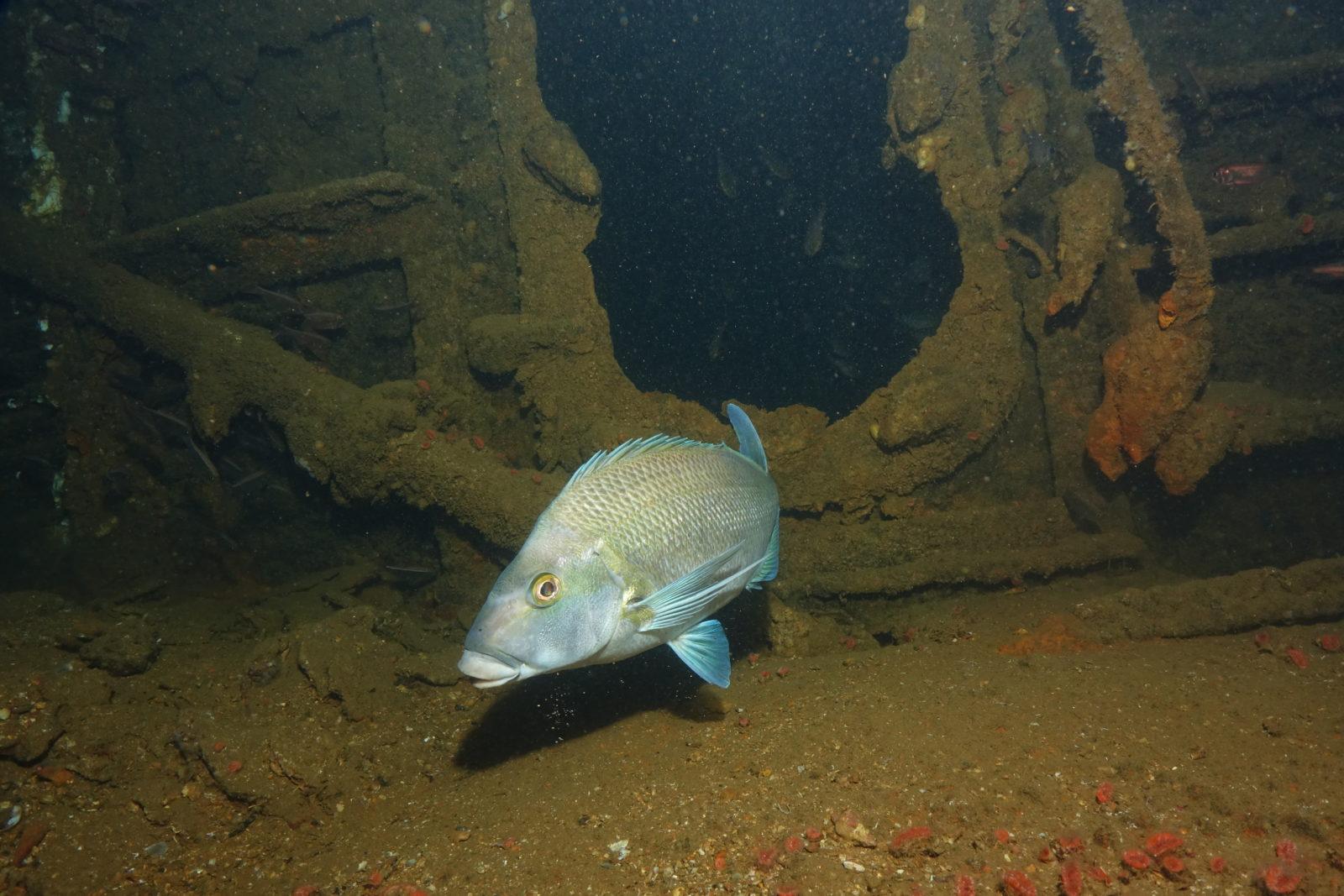 Passing along the internal corridor towards the aft, we were able to peer into the room where a number of the crew were sitting sharing a beer when the first explosion detonated. A quick tip of the hat (or hood as it were), and we exited the wreck through an opening in the corridor ceiling.  Finishing the dive exploring the top deck and snapping off a couple of pics of the lovely Gem nudibranchs (Dendrodoris krusensternii) we ascended back up the mooring line. Not before a final treat of a huge school of sweep (Scorpis lineolata) surrounding us on our safety stop.

Our day continued with lunch and coffee on the hot pebble beach of Shag Bay before a lovely reef dive at Seal Bay. And yes, the namesakes of the dive-site paid us a visit. Returning to Matauri Bay beach, we ended our trip with a final view of the impressive Cavalli Islands and Matauri Bay before driving back to Paihia for a well-earned cold beer. 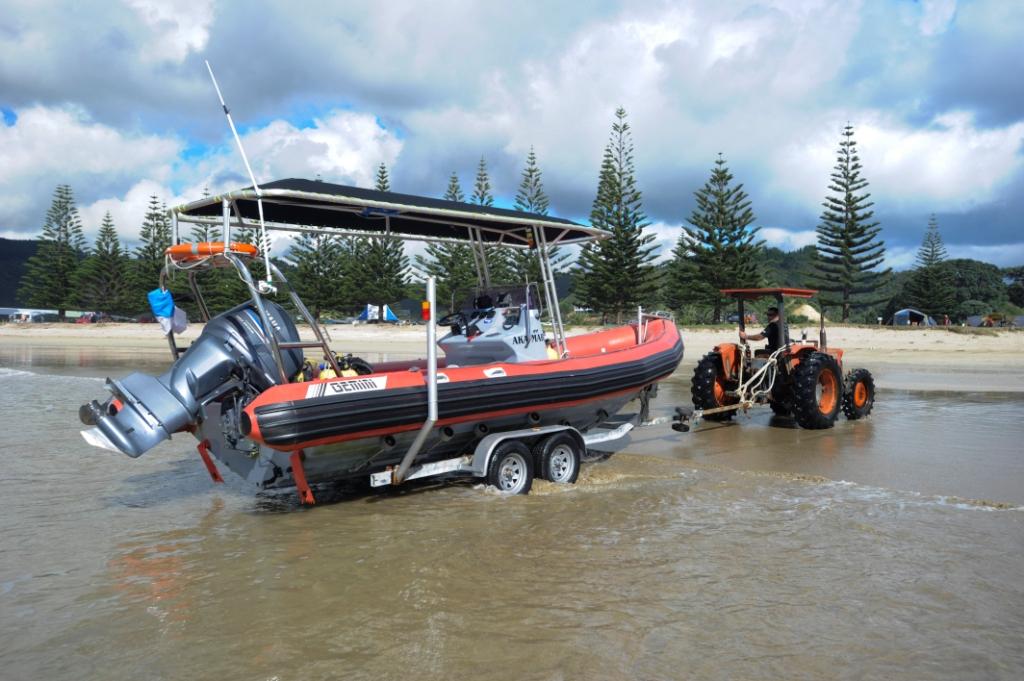 The Cree Indian prophecy from which the Rainbow Warrior took her name predicts:

“When the world is sick and dying, the people will rise up like Warriors of the Rainbow…”

While I don’t know if our world is sick and dying, I do know that the people of New Zealand, particularly local Māori iwi, have risen to give this vessel a beautiful final resting place. From here, she can continue her mission to provide life and protection to the wonderful creatures in our oceans. This dive is an absolute must-do, amongst a list of must-do dives in New Zealand’s far North.

“Paihia Dive has been operating in The Bay of Islands since 1978, and is the only dive operator running regular trips to the Rainbow Warrior.”

For more about Diving in New Zealand try: