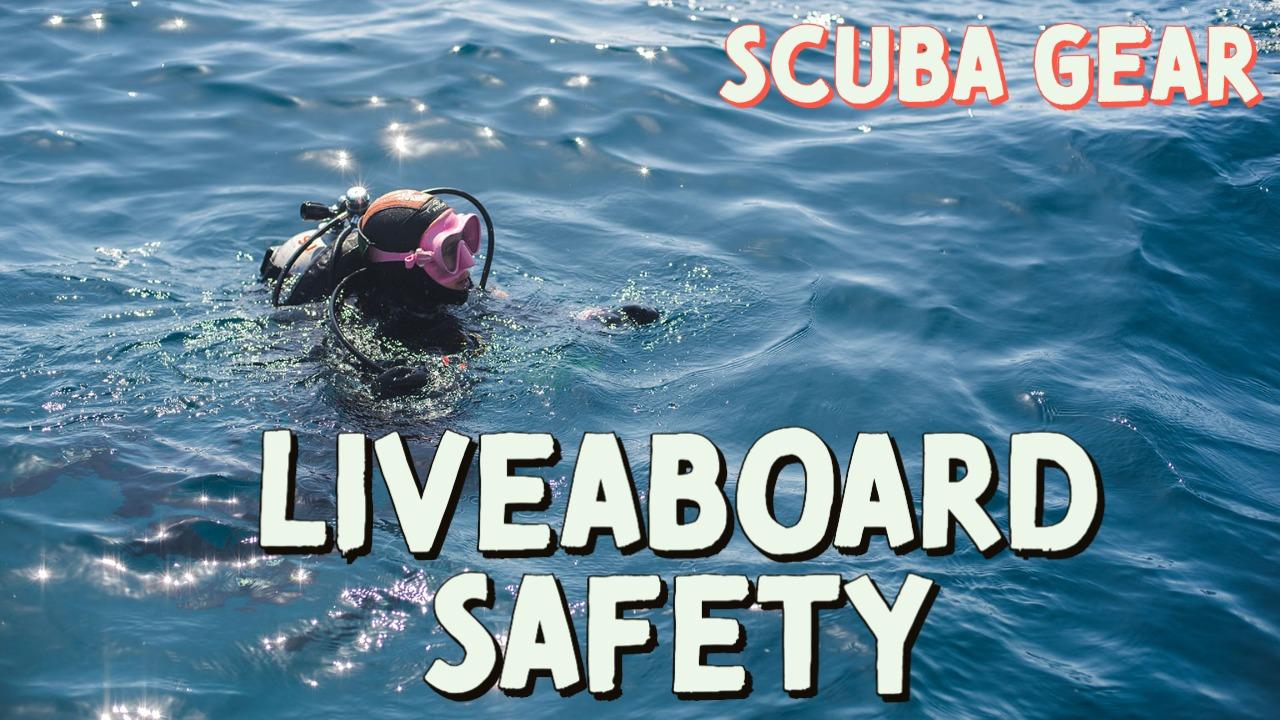 The Poor Knights Islands, located 23km off the Tutukaka coast are the remains of a group of ancient volcanoes.  The formation of the Islands boasts spectacular underwater drop-offs, walls, caves, tunnels and arches from as shallow as 6m to a staggering 90m.  There are daily charters out to the Poor Knights Islands where you can spend the day diving, snorkelling, sight-seeing or even paddle boarding these sensational islands.

In 1981, some of the islands were made into New Zealand’s second Marine Reserve (Goat Island in Leigh was the first in 1976).  They became fully protected in 1998 and with over 20 years of protection the Poor Knights are now teeming with life and represent what New Zealand waters should be like.  They are a divers dream with fish happily interacting with snorkelers and divers in the water.

They are so spectacular and diverse that they were named by the late Jacques Cousteau as one of his top ten dive sites in the world.

And it’s not just underwater that blows the mind.  Above water the sites are breath taking.  The dramatic coastlines of the islands with its sheer cliffs, archways, tunnels and caves keep you clicking the shoot button on your camera.

Each spring the Buller’s Shearwaters return to the Islands, flying in from North America to their only nesting site in the world.  And what a sight!  It is estimated that there are around 100,000 breeding pairs.

It’s not just the birds either, the Poor Knights are pest free as it is illegal to land on the islands.  The prehistoric Tuatara made its way to the islands when they were linked to the mainland over 2 million years ago.

Diving at the Poor Knights is fantastic all year around.  During the summer months of January to late April the water is warm (20-22 Degrees Celcius) and the water is clear with around 20m of visibility.  May to September no doubt has the best visibility (up to 30m), but is a chilly 14-16 Degrees Celcius.  With the waters warming up in September through to January the visibility can be slightly reduced due to the amount of Salps, Plankton and Algae Blooms in the water.  However, with this abundance of food around the fish are plentiful.

Blue Maomao Arch is probably one of the most popular and photographed dive sites at the Poor Knights.  Ideal for snorkelers and divers, situated in the Labrid Channel, Blue Mao Mao Arch can be seen as a low lying archway above the water.  When the sunlight comes in through gaps in the rock, the shafts of light shine through the water giving it its iconic feel.

Large shoals of Blue Mao Mao and Two Spotted Demoiselles keep to themselves on either side of the archway. With a little bit of current bringing in the nutrients that they feed on there can be literally thousands of fish covering the walls.  It truly is a spectacular sight.

Rikoriko Cave is the largest sea cave (by volume) in the southern hemisphere. Most dive charters will take boats into the cave, spending time telling stories of the Poor Knights Islands and revelling in the amazing acoustics produced inside the cave.

Underwater, however, is even more spectacular.  Due to the low light, deep water species live in just a few metres of water towards the back of the cave.  Filter feeders keep the water clean and so the visibility in the cave is stunning.

As you enter into the cave, the steep walls are encrusted in colourful life and the floor is sandy with large rocks that have fallen from the ceiling.  Schools of Blue and Pink Mao Mao group together in the shade.

As you head towards the back of the cave, the light starts to fade and you can spend your time searching around the rocks using your light.  There is the remains of a whale jaw bone located at the back that some divers like to search for.

As you turn back and head for the exit, you will be treated with the light show of leaving the darkness of the cave to the open ocean.

Northern Arch, located at the northern end of Puketuaho Island is hands down our favourite Arch.  You never quite know what you are going to get.  Due to its location at the northern end of Tawhiti Rati and on the end of Te Araara Point it is susceptible to current and that’s exactly what makes it so special.  The archway is quite short, but very deep.  At 40m in the middle, the bouldery bottom tumbles away to beyond 50m at either end.

The currents that pass through the archway bring valuable nutrients to the sponges and encrusting life that cover the walls and floor, as well as feed the thousands of Blue and Pink Maomao and Two Spotted Demoiselle that fill the archway.  Huge snapper and kingfish glide through on the current and stingrays can be found stacked up on top of one another during the summer months. If you are lucky you may get a glimpse of a bronze whaler shark, but these shy animals tend to be found out on the point hanging in the current.

If you swim out towards the 50+ depths, the sponge life becomes more vast.  And a swim or scooter around the point may even have you bump into a bronze whaler shark or something even more special such as a hammerhead.  The same route around the point in the shallows is also a fantastic route to take is you have enough gas.  Large snapper and other fish school in the current on the point.

Keen on Macro photography, then Magic Wall is a great hangout for you. Spend your time slowly moseying along the wall taking in all the critters who call it home. Loads of Nudibranch species, both big and small, can be found along the wall and keep your eyes peeled for Moray Eels draped over the sponges and kelp. And don’t forget to take your eyes away from the wall occasionally to look out into the blue…. you never know what you might see. 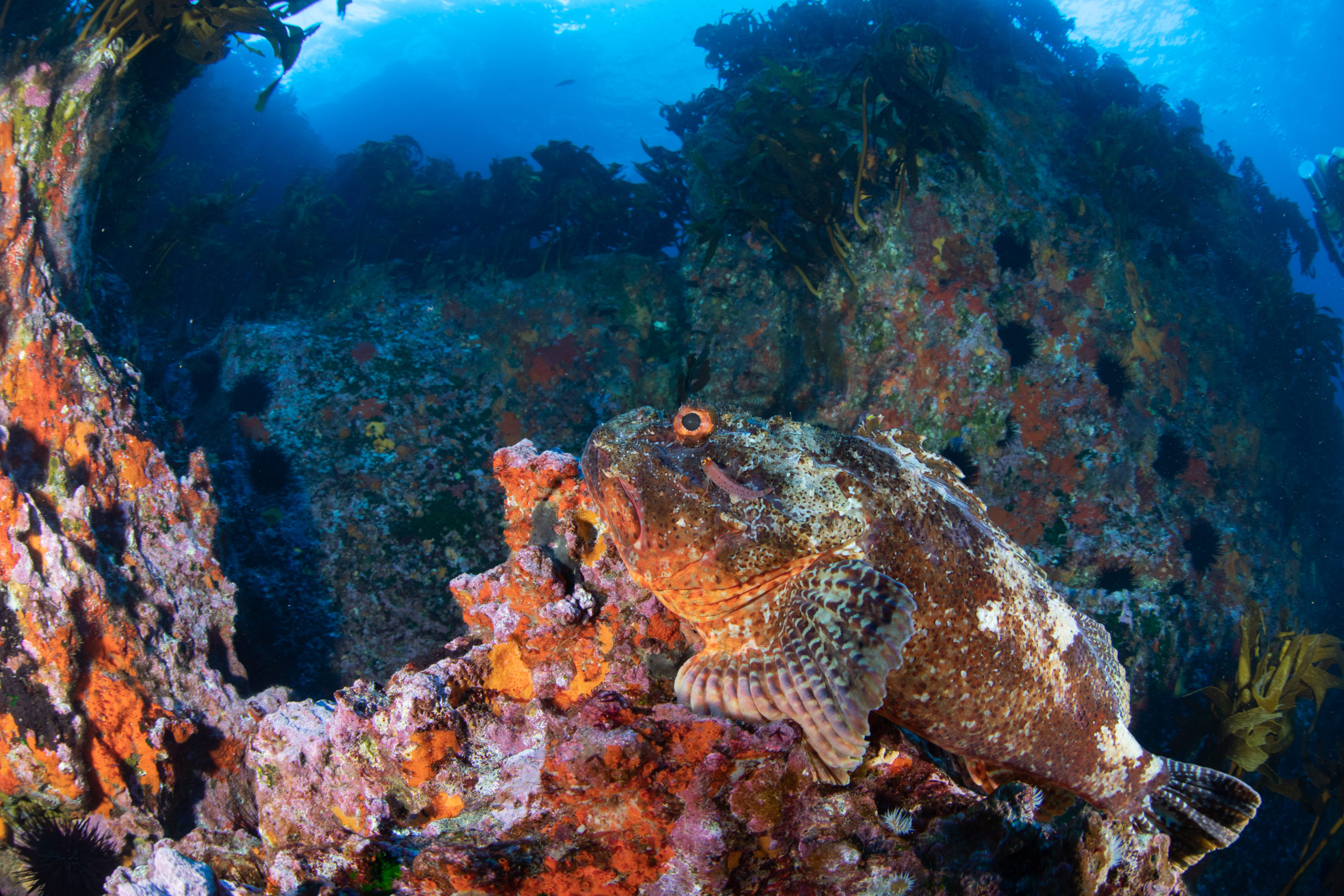 Middle Arch is one of my most dived sites at the Poor Knights.  Its location means that it is often a nice sheltered spot for the boats to anchor.  Again this is another colourful and fishy arch, normally with less current that Northern Arch.

Blue Maomao and Two Spot Demoiselles usually dominate the site along with some good size snapper.  The terrain is very bouldery and hidden on the boulders will be scorpion fish and numerous nudibranchs.

At the southern entrance there are large rock formations to explore and the bottom of the arch is home to a Porae, Perch, Mado and a variety of Moray eels.

The encrusting life in the archways of the Poor Knights are so colourful it would be criminal not to bring a torch along to really appreciate them.  On the colourful rocks you will find nudibranchs, scorpion fish as well as other colourful fishes and critters.

On the left of the southern entrance there is a large open sandy cave, “Bernie’s Cave”.

The floor of the cave is sandy and often has stingrays at rest on or in the sand. There is a shelf at the back of the cave approx. 3m from the floor. If you look up at the roof of the cave you will see a silvery mirror-like reflection, this is an air bubble that is large enough for 4 divers to pop up into. 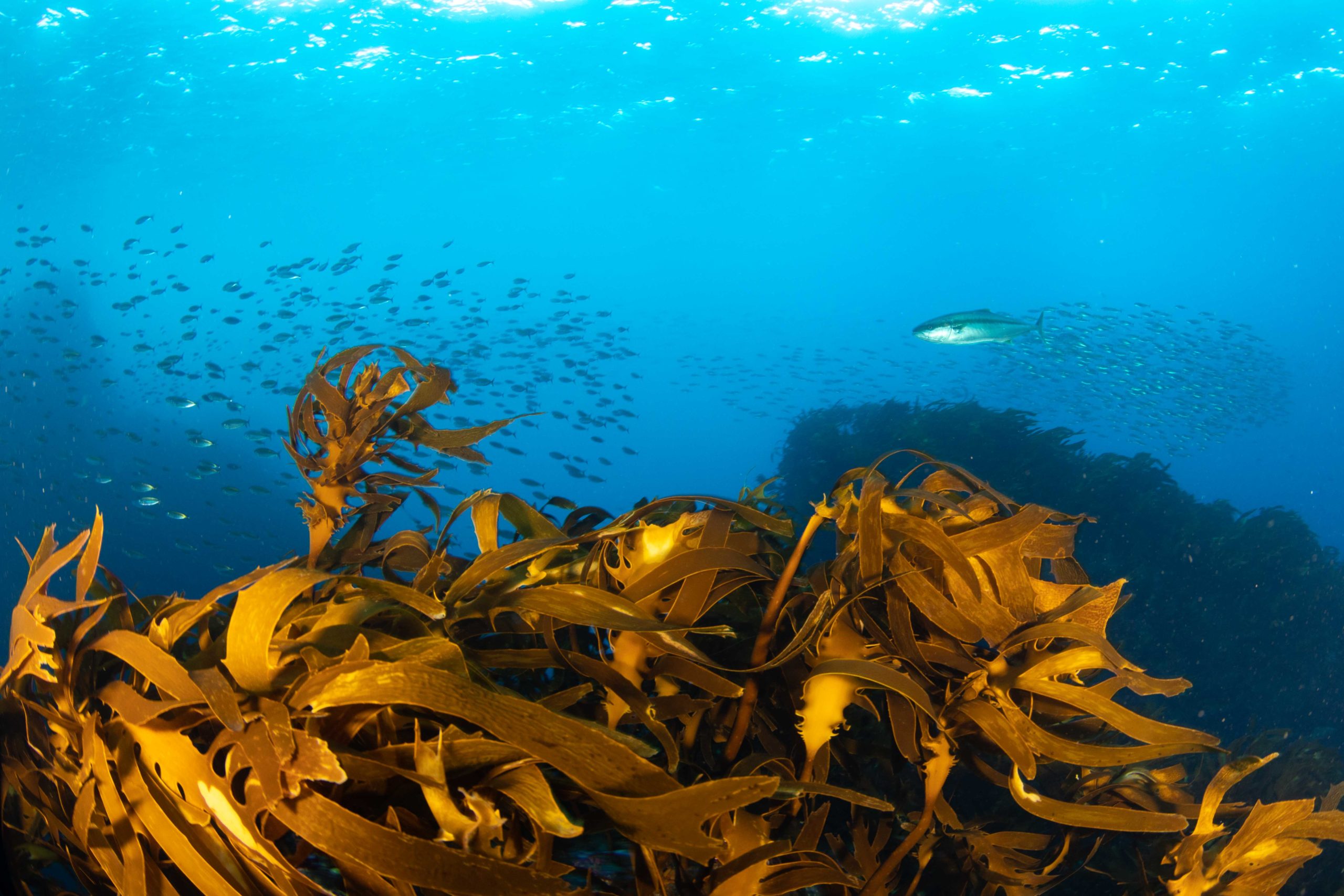 Often chosen as a dive site for beginner divers The Gardens shouldn’t be underestimated.  The Gardens is home to a number of juvenile fish. Close to the cliffs the depths range from 5m to 10m and it can hide some gems. Painted Moke, scores of snapper, angelfish and even eagle rays can be found amongst the variety of seaweeds. If you are lucky enough to visit when it is full of shrimp, then you will not be able to see your buddy through the feeding fish.

As you swim away from the cliff you will cross kelp, sand patches and even sunken bowls where large snapper, giant boarfish and porae hide.  As you continue on you will hit the sand line at the 18m mark and beyond.  This is a great place during the summer to watch for stingrays. 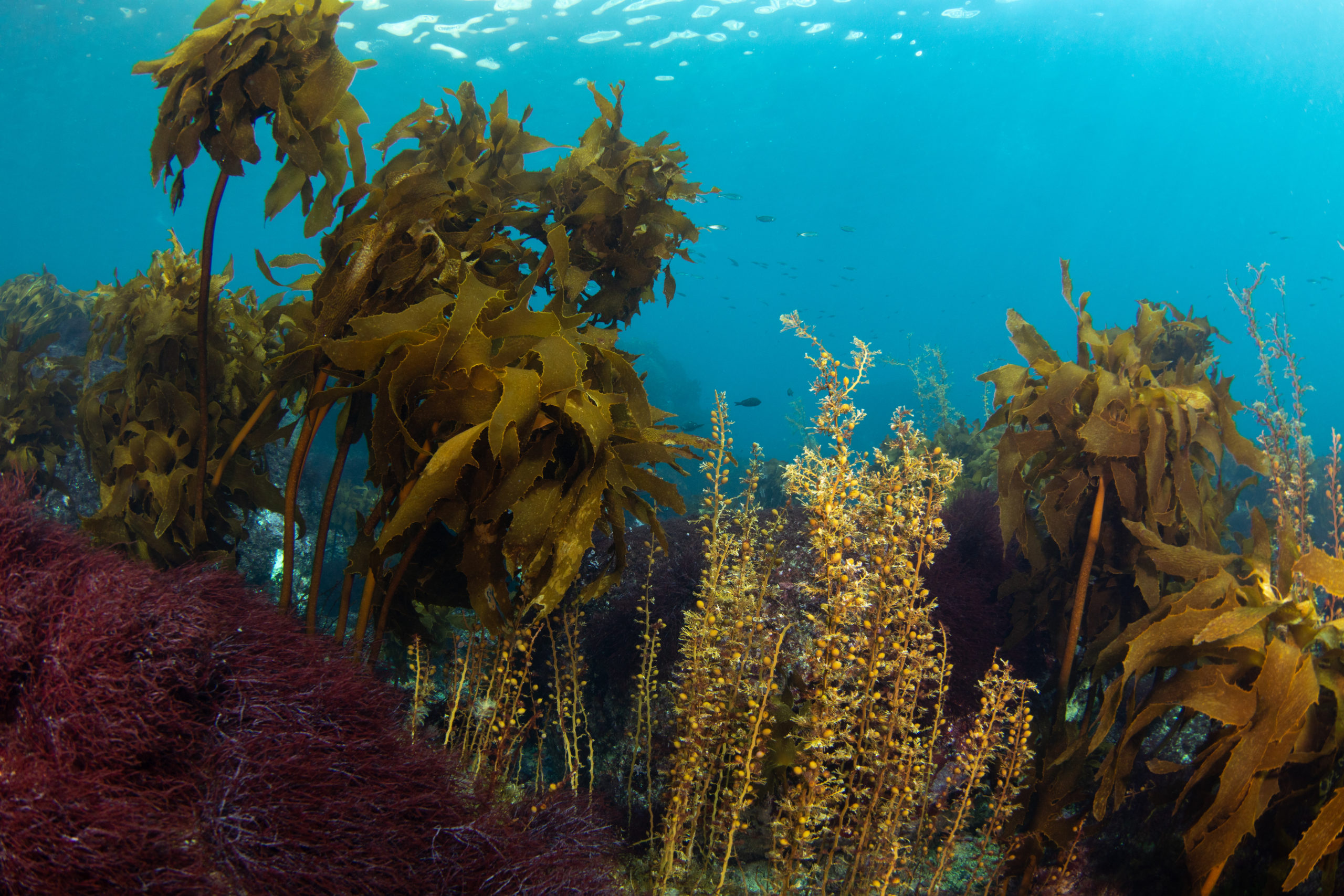 Ngaio Rock is a pinnacle that has 40m+ around it.  With nooks and crannies both at the surface and all the way down to the sand line, this site is fantastic to explore for snorkels and divers alike.

With easy access to depth, this dive site is very exciting. 30m is easily achieved here and so are deeper depths on the western side of the rock.  As the currents flow through the Labrid channel you can find shelter in the lee of the rock, but the currents bring much nutrients the life that resides on the rock. 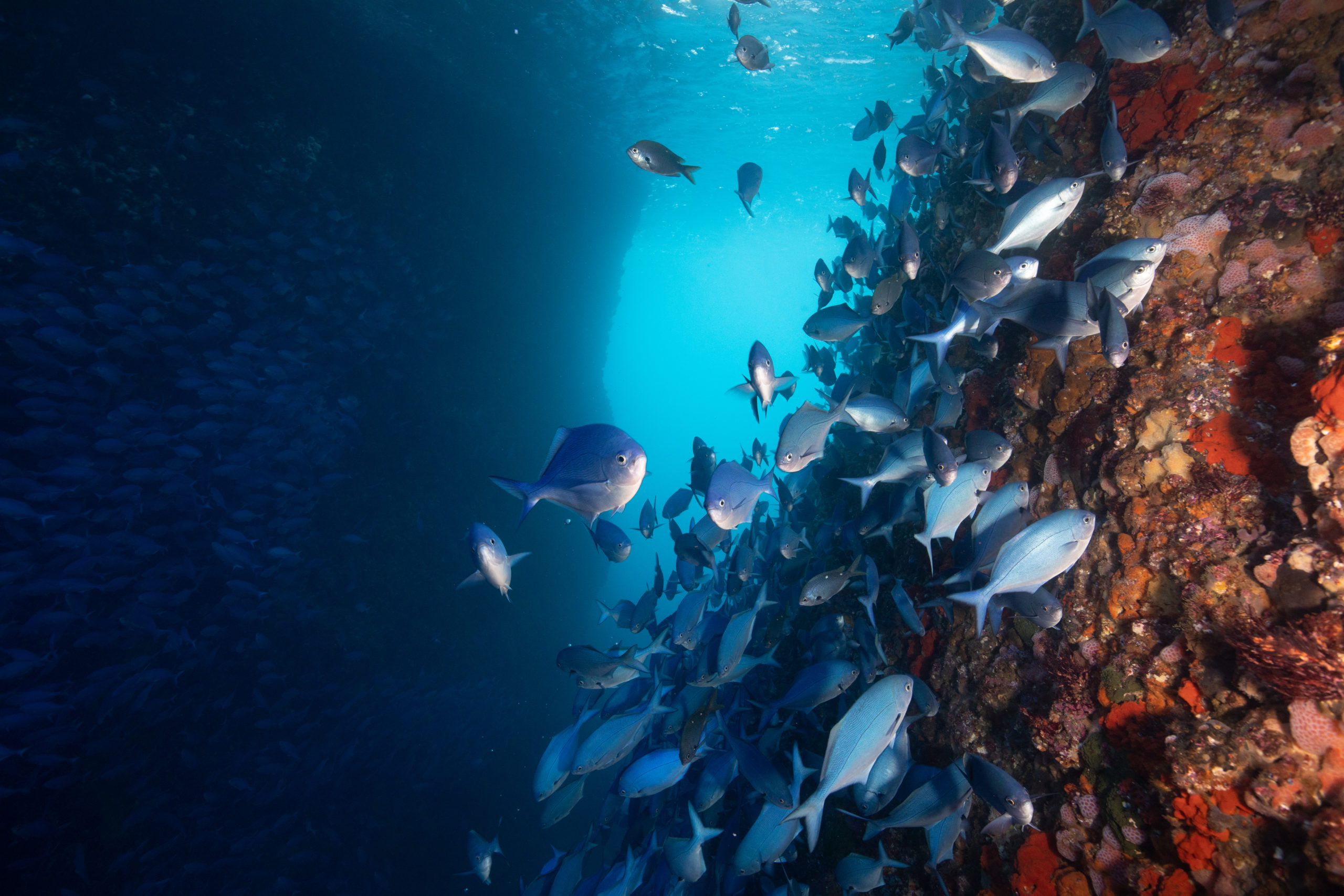 Landing Bay Pinnacle is a go to Deep Dive spot for Advanced Divers at the Poor Knights as it starts at 6m just below the surface, making it perfect for safety stops and deco stops and as you descend its steep walls you can easily hit over 45m.

The top of the pin is colourful and kelpie and normally hosts an array of shoaling fish hanging out in the current or swell at the top.  As the pinnacle drops away steeply, large schools of fish hang out in the blue close to the rocks.

This is a great sight for finding Firebrick Stars, eels, large scorpion fish plus heaps more. 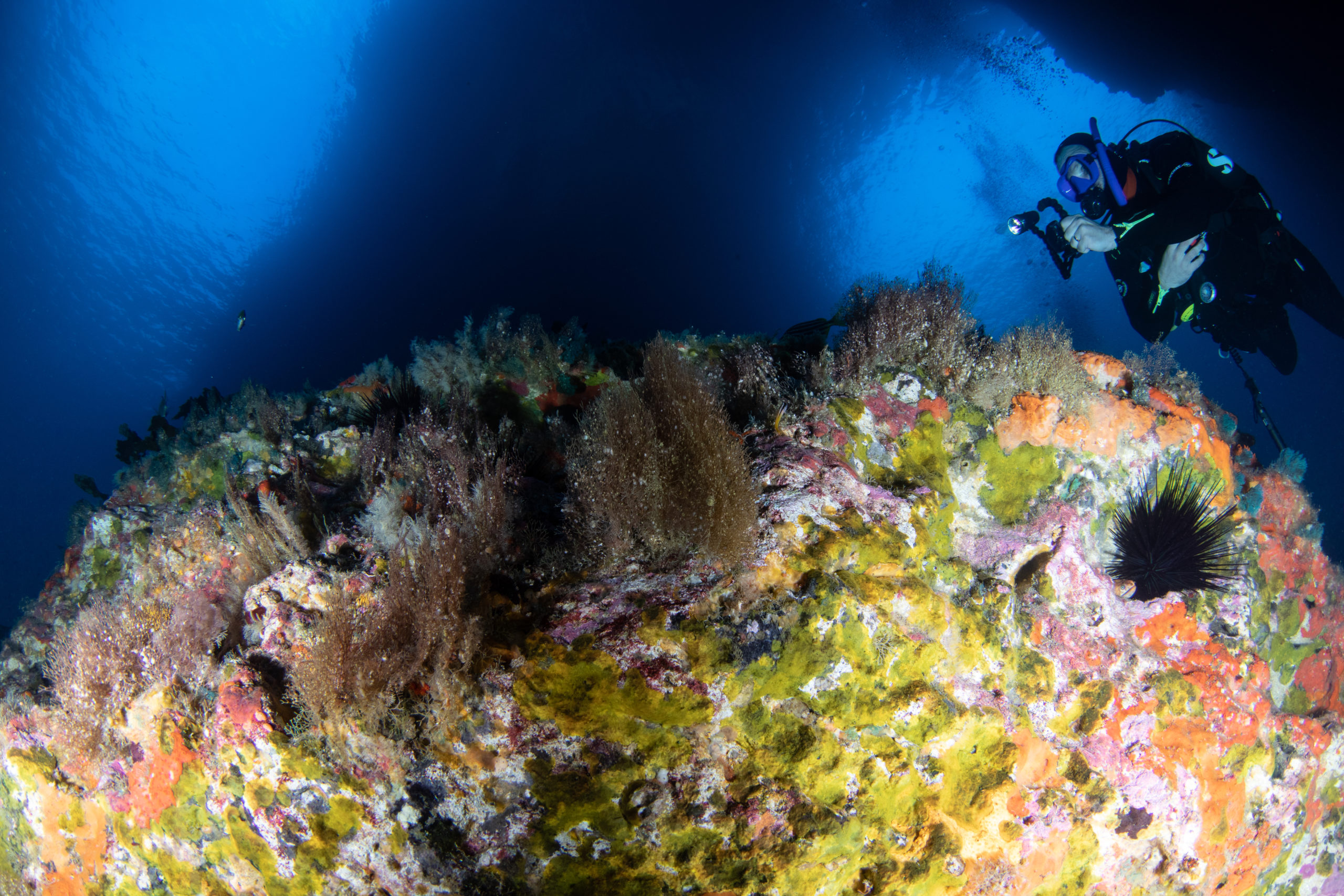 About 5km south of the Poor Knights, but still part of the Marine Reserve sits the Pinnacles. If you are lucky enough to visit here on a clam day, then you must visit Tye Dye Arch.

The entrance to the archway is at around 18m on the channel side. As you pass along the colourful encrusted wall and enter the archway, you will be met by an enchanting scene of light coming through two passageways full of fish. Turn around and you look back out at the main archway. Here large schools of Pink and Blue Maomao congregate. During spring seals will join the snorkelers and divers making an unforgettable trip. In summer this is a great place to see multiple Stingrays and Kingfish hang out in the currents that pass through the archway.

Sugar Loaf is the southernmost island in the Poor Knights Marine Reserve. Like the Pinnacles, this site requires perfect sea and weather conditions due to its exposed position.  It is also home to hundreds of Australian Gannets.  Sugar Loaf offers amazing diving on its steep deep walls, with a great shallow kelpy bay for performing safety stops between the submerged rocks that are often surrounded by fish.

The Poor Knights Islands is a must see destination.  With so many amazing dive sites there really is something for everyone and plenty to keep divers going back time and time again.