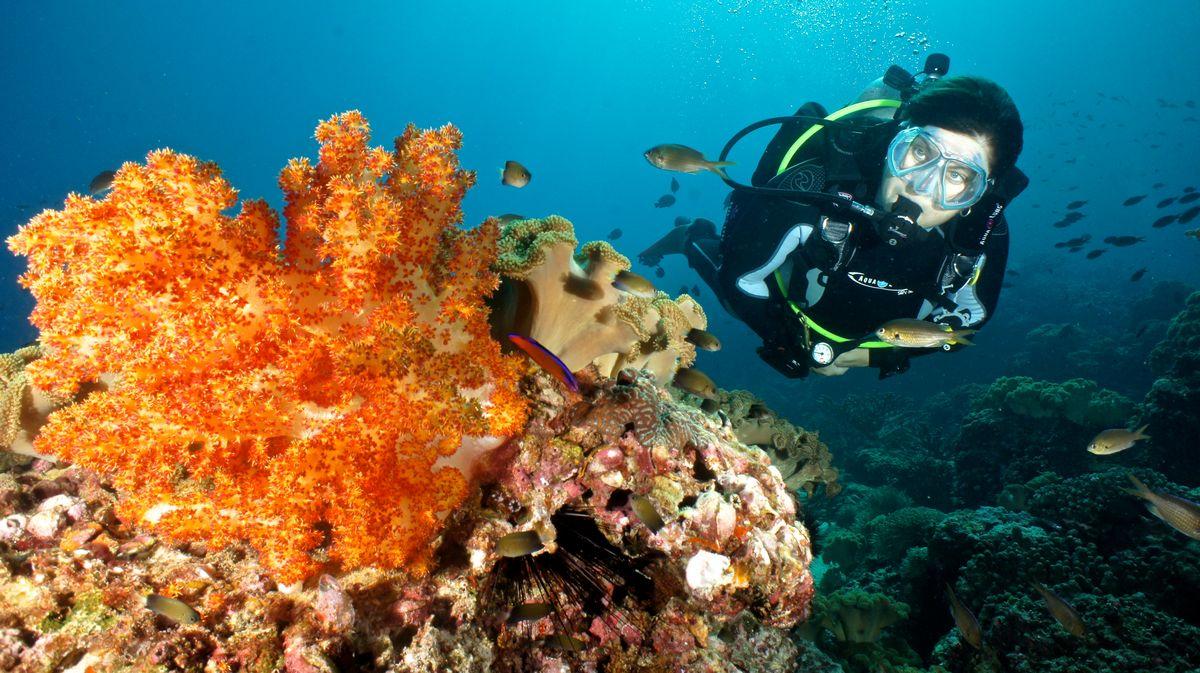 The Sultanate of Oman lags behind near-neighbours Egypt and Jordan when it comes to being embedded in the sub-conscious of the diving fraternity, but this is a crying shame, as this country has much to offer visiting scuba enthusiasts and adventure lovers. With over 1,700km of coastline bordering three seas – the Arabian (or Persian) Gulf, the Gulf of Oman, and the Arabian Sea – being served by literally a handful of dive centres and liveaboards, it is a dream destination for divers, and with plenty of topside activities on hand, including wadi-bashing, climbing, hiking and much more, there is something for everyone if you happen to have any non-divers in your group.

The undoubted highlight of any diving trip to Oman are the Daymaniyat Islands, which have been a national nature reserve since 1996. This collection of ten small islands, which are spread over a reasonable distance, lie less than an hour and a half from the marina in Muscat and, it has to be said, do not particularly inspire a feeling of awe when first viewed from the dive boat, as they are desolate, barren and windswept. But drop below the surface of the water and you can immediately see what all the fuss is about.

My first trip to the Sultanate of Oman was way back in 2000, and I had only been able to spend one fleeting day at the Daymaniyats, but the islands were ingrained in my memory. One recollection I had from that trip all those years ago was hovering in mid-water, doing a slow 360 degree turn and just being able to see endless table corals everywhere I looked, and gigantic ones at that. Sure enough, on at least two dives completed during my more-recent trip, I was able to recreate this memorable moment. It is truly thrilling to see these majestic corals literally interlocking with one another, there are so many competing for space. Several were well over three metres in diameter.

This time around, I had the entire week to savour different dive sites within the Daymaniyat chain, so I didn’t have to content myself with just a teaser of what they had in store. Over the course of the six diving days, our Euro-Divers guides, led by long-time operations manager Karin Straub, showcased some of the very best diving in the region, with the highlight dive sites being Aquarium, Garden of Eden, Three Sisters and Hayut Run. The former actually more than lived up to its name, and there were so many shoals of snapper, groups of Arabian and Emperor angelfish, hordes of long- and short-fin batfish, honeycomb morays, anemonefish, and a grand old turtle adorned with large barnacles, it did actually feel like you were in a giant aquarium. The other sites offered up treats like mating cuttlefish, a leopard shark and yet more turtles, plus a fleeting glimpse of a couple of blacktip reef sharks.

However, it isn’t just the marine life that makes the Daymaniyats so great, the underwater topography is also unique. As well as swathes of hard and soft corals, interspersed with vibrant sponges, some of the rock formations are simply stunning. Swim-throughs, overhangs, nooks and crannies all help make the reef itself interesting, regardless of what swims or crawls into your path.

Another oddity around the islands were some serious thermoclines. Drifting along a wall in relatively clear visibility – the waters are so nutrient-rich, it is rare to get vis to rival the Red Sea, but on a good day it can be 20 metres or so – it would seem as though you were approaching an underwater ‘sandstorm’, and on entering this phenomenon, the visibility would plummet to just a few metres and the temperature would drop by a good 7-8 degrees C. Then, within a minute or two, you would suddenly be basking in warmer waters again and witness the visibility opening back up to ‘normal’. This happened on several different dives more than one, and I think is something to do with the way the currents swirl around the islands from deeper waters offshore. It certainly adds to the whole experience of diving the Daymaniyats!

While the Daymaniyats are regarded as the number one diving spot in the country, there are at least two other locations which are also worthy of closer inspection.

At Bandar Khayran, there are around 20 different dive sites for all levels of experience, from shallow, quiet bays for first dives to more adrenaline-pumping drift and wreck dives for the more-advanced diver.

Fahal Island, a short distance from Muscat, is a dive hotspot which offers 11 dive sites that all feature, due to its currents and steep walls, an abundance of pelagic marine life, including reef sharks, rays, barracuda, tuna and jacks. Soft and hard corals are profuse, and the shoals of reef fish are impressive.

Oman is still one of those rare places where you can get a real ‘explorer’ feel when you visit, and as a diver, this is especially true, as with so few dive centres throughout the entire country, it is unusual for your dive group not to be the only ones in the water at your chosen dive site.

There are more diving areas coming on-line – besides the aforementioned Bander Khayran and Fahal Island, there is also Salalah and the Musandam Peninsula to be explored, as well as the artificial reef Al Munassir – but the Daymaniyats remain the jewel in the crown. Get out there now to experience a taste of the ‘real’ Middle East.

Extra Divers boasts four dive centres in Oman – one at Mirbat in Salalah (in the far south of Oman), Qantab and Sifah near the capital Muscat, and Zighy Bay in the Musandam Peninsula – meaning it can offer a rich selection of dive sites. Courses are offered for non-divers and divers, and snorkellers can also get involved at most dive sites.

Based in the Marina Bandar Al Rowdha near Muscat, Euro-Divers is one of the longest-established dive centres in the country. It offers courses for all levels of diver, and conducts dives at the Daymaniyat Islands, Fahal Island, the Al Munassir shipwreck, and Bandar Khayran. Even snorkellers are catered for, making it perfect for non-diving family members.

Luxury liveaboard company Aggressor Fleet operates a smorgasbord of high-end dive yachts in some of the world’s most-desirable diving destinations, including Galapagos, Palau, Costa Rica, Indonesia and Fiji. One of its newest locations is Oman, and there are four itineraries taking in the Daymaniyats, the Hallaniyats and the Musandam Peninsula.

Diverse Travel is headed up by a team of experienced, well-travelled divers, who are proud to be able to offer customers a personalised service and have an in-depth knowledge of all of the worldwide destinations they offer. They are one of the few specialist dive tour operators to feature Oman in their portfolio.