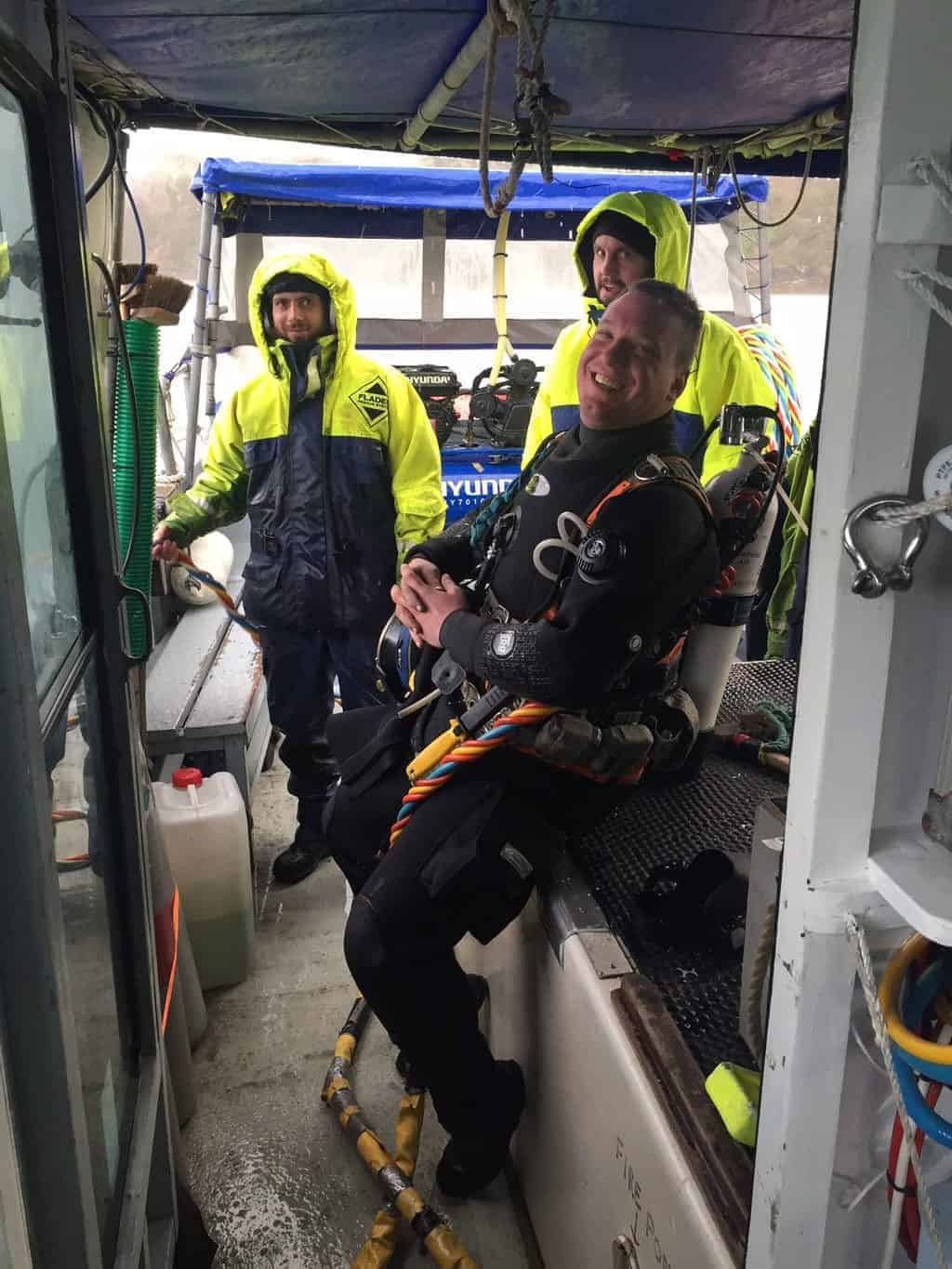 Since my last article, the commercial diver training year has come to an end, but not without its own dramas, but more about that in a moment! The last course of 2017 had good numbers, with 12 students completing the nine-week course, but what was nice for the staff was that there were some really good students on that intake. Like all courses there is always a broad cross section of society… military, boffins, geeks, sickly people, solid types (upstairs) and loonies! We had our fair share of every variety but they all seemed to gel and the team atmosphere made the weeks fun.

School finished on the Friday and on the Monday, the training team were now part of the contracts team doing the annual moorings job that lasts five weeks in a harbour in Devon. At CDT, we always try to give former students a ‘first job’ out of school, so I always keep one place on the team for them. I cannot dilute the team too much or it may impact on the job schedule, but this way we can achieve our contract goal and the experienced guys can help the rookie.

The job is to work in-conjunction with the harbour moorings team, who operate a barge that follows us as we work. Our job is to dive down, disconnect the mooring from a block on the seabed, inspect the block and once the mooring chain has been serviced. reconnect it to the block. All pretty simple stuff, though some are surprisingly deep, others very shallow, and sometimes we have amazing vis but mostly we work in the dark digging in the mud!

It’s a good contract and the harbour guys are mega-friendly and we get together after work to debrief the day in the pub (as it’s got a fire and we need to warm up). This year we rented the floor above the Lifeboat house, it had amazing views of the harbour, was 100 metres from the boat and ten metres from the pub!

Living above an RNLI Lifeboat house certainly makes you feel safe and festive, visions of the Giles cartoon Christmas cards and all that, but when the boathouse comes alive… at any hour… the fact that someone may be in danger comes home. Just such an occasion happened during our stay, but what made it more surreal was the fact that we made the boathouse come to life – and by pure chance!

Picture the scene… All was quiet in the divers’ dwelling above the Boathouse, crusty diver Will had decided to crash over on the sofa after we had been to the pub (to warm up!) which looked out onto the water. He was roused from his slumber by faint calls for ‘help’. After a couple more shouts of ‘help’, crusty old Will decided he wasn't dreaming – across the harbor, someone, somewhere was in trouble.

Will got up and knocked on my door… no answer. At the next door, the two lads inside had the terrible sight of Will in his meagre sleeping attire waking them up, but within seconds were out the door and running along the waterfront trying to home in on the calls for help.

Across on the other bank was a fisherman who was stranded after falling from his boat at 2am, soaking wet, in the wind and getting hypothermic no doubt. Now armed with this information, Will called the Coastguard, who in turn mobilised the lifeboat, and within minutes the fisherman was rescued and brought back to the boathouse to await the ambulance to take him to hospital.

Due to the delay of the ambulance by the overstretched service, the cold fisherman was looked after by the lifeboat lads until 4.30am! It then all went quiet again and sleep continued in the divers’ house… it was at this point that being over 47 but younger than 49, my bladder kicked in, I removed my ear plugs (we live next door to a pub, after all) and went to the bathroom before getting another couple of hours sleep. I only knew about the rescue when the bleary-eyed lads told me over breakfast… I had slept through the whole thing!

The lads had done all that, been up for hours during the night, and got up as normal to get on with a full days diving without any complaints. Fair play and well done! If Will hadn't stayed over, if the wind wasn't blowing the cries for help in that direction, and if the lads weren't as quick to react to a guy in the water with no lifejacket and no light or whistle, how long would he have lasted? And I know they get praise from all quarters, but the RNLI never say no, they help mariners and divers alike… it’s good to know they're there.

With a well-earned break upon us, we have a lot of preparation to do before it all kicks off again, but already booked in are more courses, contract jobs and TV support.

Until next time… safe diving!