Living in the Dark The Blackwater Diving World 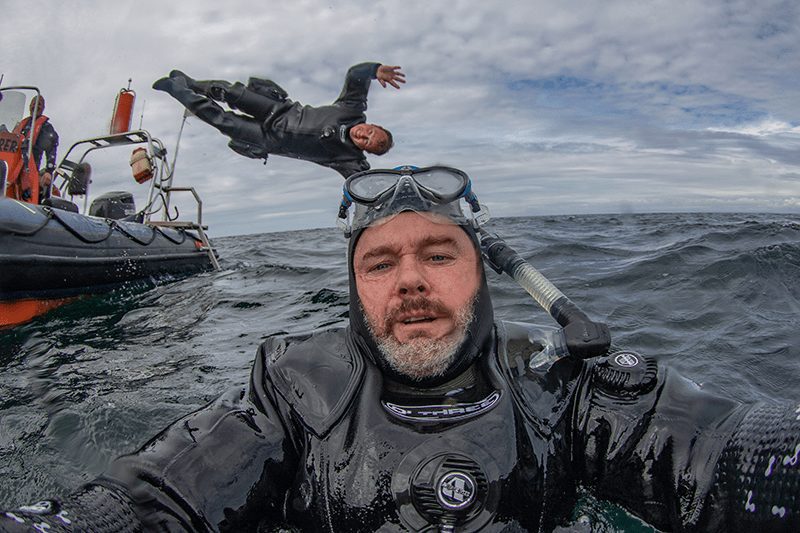 The Right Stuff Anne Medcalf looks at what to consider...
Contents hide
1 Living in the dark the Blackwater World with Mike Bartick
1.1 Three basic tips for Blackwater diving:
1.1.1 Dive skills
1.1.2 Photo skills
1.1.3 Hunting skill
1.2 What to look for:

Living in the dark the Blackwater World with Mike Bartick

Its late in the evening, our gear is set and our dive team is getting ready to pull away from shore. Most of the folks in our local community of Anilao are sleeping by now but were just getting started. Blackwater diving keeps us up most nights running a reverse time cycle for weeks at a time. Departing well after sunset, we plan to hit the proper tidal flux in hopes that mother nature will reveal some of her best kept secrets to us tonight as we drift the currents in the black night sea.

Blackwater diving is unlike regular night diving for many reasons. The dives take place off shore in open ocean, often times over very deep water where we free drift in the current using a lit downline to attract the various creatures of the night. This fact alone is usually enough to repel most divers from even considering blackwater dives as the fear of some toothsome creature will suddenly lurch from the dark. However, this fear is immediately overcome by curiosity once a diver sees the magic happening with their own eye’s.

The obsession for BLACKWATER Diving begins with the idea of being able to witness nature in its purest and most raw form. The chance of seeing something that no one else has and of course the opportunity to observe and photograph what we see. So for weeks on end, we happily endure the reversed time cycle’s and daily cat naps with baited anticipation.

Over time, our dive team has developed a downline of lights which serves as a beacon for the divers to keep up and as a safety feature for the topside support team to follow. We attach the downline to a brightly lit orange buoy on the surface that we’ve named “The Pumpkin” which gives our boatmen a direct line of site to our location at all times. With safety procedures in place, divers can concentrate completely on the dive and shooting photos while we leave the rest to the topside dive team.

The target subjects for blackwater divers are generally plankton but not all planktons are small gelatinous creatures. Imagine, every single organism in the ocean with the exception of mammals, sharks and rays, spend a period of time developing in the water column prior to “settling”. Octopus, crabs, shrimps, snails, anemones, crinoids, sea cucumbers and of course fish, to name a few, will all spend a portion of their early life drifting, feeding and gaining strength before moving into their next stage of life either on the substrate or in the water column itself.

The strategy of the lights is to create a plankton cloud which eventually draws in our target subjects and the predatory animals that feed on them. Hunting along the outside edge of the light seems to work really well for finding light sensitive subjects while many others are attracted directly to the lights themselves. Oddly enough, many of the subjects that are initially attracted to the lights, do everything they can to get away from them once their there. Shooting photos of these unpredictable creatures is comparable to photographing a butterfly while running down the sidewalk at night.

Some of the creatures movements are erratic and unpredictable and extremely fast while others are not. Some are drifting and spinning or pulsing up and down, some so delicate that a mere fin kick will destroy them while others are robust, flying by and snatching fish small bait fish right before your eyes. Darkness rules the night and transparency can go a long ways when it comes to protecting yourself if you live in this environment. Its incredible to think that anything could survive such a gauntlet but it does, nature is on full display here so keep your eyes open.

Safety first for BW diving. Be sure to have great buoyancy skills before venturing out. During the dive try to move slowly without flailing your hands, excessive finning and movement creates pressure waves that will disturb your subjects. Each movement creates turbulence and many of the delicate creatures could be destroyed outright or sent spinning away, curl up or dash off. Pay close attention to what your ears are telling you as depth changes occur quickly. Invest in a computer that is always backlit and can be read without pressing any buttons.

Many of the subjects are fast and reflective yet timid. I suggest the following as your Jump settings.

Hunting for your subjects in the water column during your BW dive is a skill that most of us don’t have initially but develop pretty quickly. Using a torch with a tight beam will allow for better water penetration even if the water is turbid. Using the torch in my left hand, ill search for subjects then work myself to it at which point I allow my focus light to take over.

What to look for:

Developing an eye for small subjects first is encouraged as the larger stuff will always avail itself. “Look small and find big” is one of my favorite mantras. Many of the small subjects have a huge story to tell and by paying close attention to the smaller creatures, the larger picture begins to crystalize more and more. Anything white or opaque is worth investigating. Drifting garbage, pyrasomes, salps and salp chains, sea grass, bamboo etc. I basically investigate everything i see and it hasn’t failed me yet.

Heterpods, or subjects with a single foot like this Sea Elephant are gelatinous, and seem to swim upside down. They often times have a small shell at the tail, and in some cases will also carry eggs there. Pteropods are subjects with 2 feet and quite often have a more advanced design including some kind of casing. Pteropods make great platforms for Male Nautilus and small octopus as well as salps and salp chains.

Snail veliger’s are named for the velum or foot that extends out like a satellite dish. They have a cute little face and the velum refracts light from the strobe flash.

Jellyfish are some of the most interesting animals on the planet and slip into place very easily as we advance along the spectrum. Jellyfish are the oldest recorded organisms on the planet with some that can actually live forever. The Immortal jellyfish can reach sexual maturity then revert back to the benthic polyp stage. There are Jellyfish that pulsate and jellyfish that use cilia to ambulate falling into the comb jelly category.

Its no secret that jellyfish can sting, infact some can even kill humans. For that alone i think many people have grown to dislike jellyfish without any further investigation. Jellyfish are incredibly beautiful animals that seem to lack certain things like a brain and a heart. However they are perfectly equipped to survive and thrive.

Some jackfish develop a symbiotic relationship with jellyfish starting at a very young age, growing with the jellyfish over an unknown period of time. The jackfish will select the jelly, then subject itself to the stinging tentacles to develop an immunity to the toxins. Swimming with the jellyfish the jack pushes the jelly through the water, which in turn creates better water contact for the jellyfish and increasing its ability to feed. The jack feeds on the stunned fish and gains shelter in return. Other smaller fish might use the tentacles of jellyfish as a way of hunting by swimming in and out of the tentacles, attracting predators that are then stung.

Other subjects like Ribbonfish, Pompano and Soapfish to name a few have elongated appendages and pennants and are said to mimic the tentacles of jellyfish or even siphonophore’s to gain a little edge on surviving.

The Wunderpuss, now one of the iconic subjects that makes BW diving in Anilao so popular are a calm and cool customer. Their siphon is nearly transparent with the pigment of forming chromatophores just begining to take form. Their 8 arms stretch out once relaxed and have become one of the most requested subjects for our guests to see and photograph.

Squids are incredible creatures capable of great speeds, color changes and are masterful hunters that work in packs. Their bodies seem to be made of rubber and like octopus, have 8 arms, plus the added weaponry of 2 elastic tentacles used for striking their prey. Squids use several distinct inking patterns in different ways. Ink puffs to escape and evade, roping to confuse and distract, mantle inking to mask their presence and ink clouds for hunting are the most common. On most dives, we will see the ink of the squid long before we ever see them hunting around us.

The diamond squid is an incredible deep sea squid that comes to the shallows during certain times of the year, perhaps to mate. They can reach upwards of 30 kilos but as a smaller squid are quite ornate.

The pelagic octopus know as the A.hians AKA paper nautilus were another one of the hidden treasures of Anilao that we uncovered. These gnome like creatures are super cute, fast and very interesting. My first sighting of a large female riding a jellyfish was beyond anything i had ever seen at the time and i did everything in my power to remain calm, focus and shoot while swimming straight down as fast as i could.

The stacking behavior is seen during the spawning season when females stack themselves into chains. The male is only the size of a garden pea but the female can reach the size of a baseball. She also produces a shell to protect her eggs which gives the Argonauta hians her nickname of paper nautilus.

Blackwater diving is an incredible experience that promises a world of adventure for divers and a world of possibilities for photographers. Be sure to include Blackwater dives on your next dive trip or join us at Crystal Blue Resort for one of our Blackwater Safari weeks and learn the Natural history of what is happening every night, just offshore.

Mike Bartick is an award-winning photographer, international public speaker, writer, educator and explorer, and admits that the next best thing to having the experience is sharing it. Mike is based in Anilao, the birthplace of diving in the Philippines and is a leading light in the discipline of Blackwater photography.